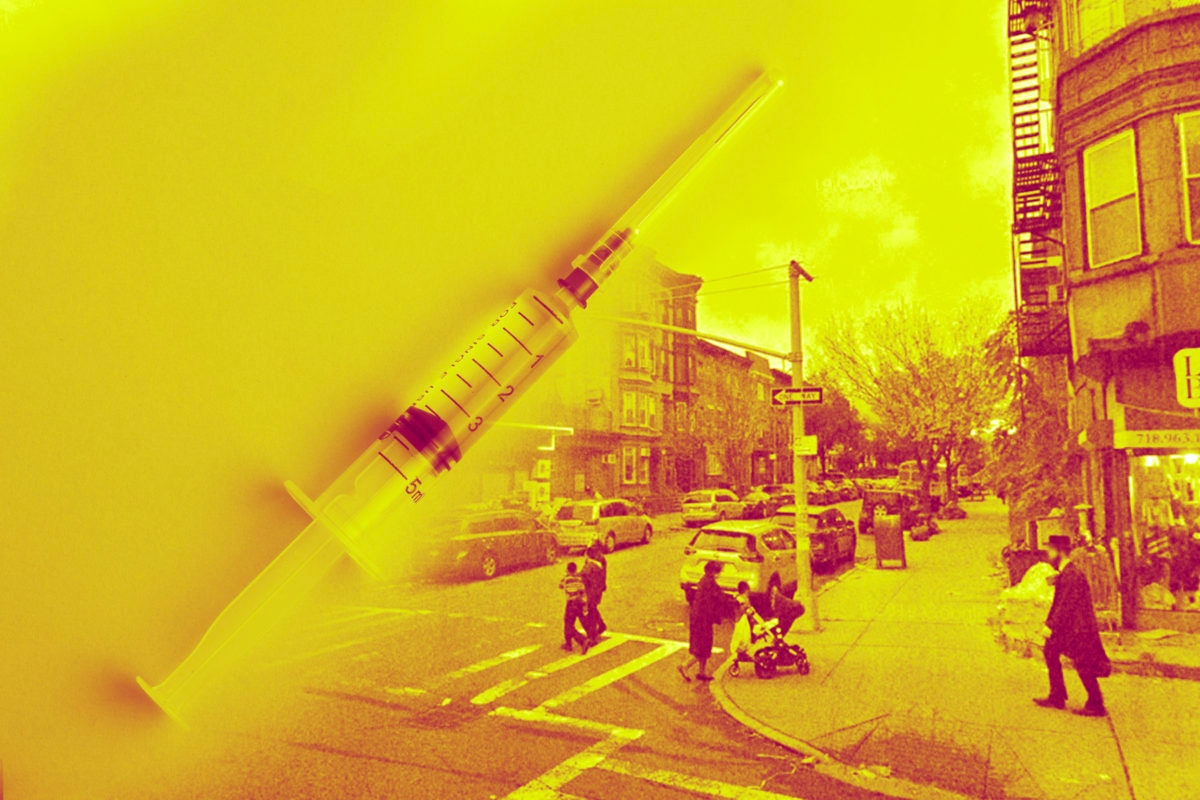 I’m at the pediatrician’s office. It’s a warm April day, and the space almost feels like a brightly colored sauna, filled with large paintings and wooden toys and surrounded by an entirely glass exterior. Outside, a woman in a long skirt and a sheitel pushes a baby in a Bugaboo Bee stroller, the same model I use for my son.

I’m waiting for my 9-month-old’s first MMR vaccine, more than two months ahead of schedule. I’m feeling a bit lightheaded, as if I were about to get the shot.

This is the second time I’ve called my pediatrician about the MMR vaccine in recent months, but the first time I was told to bring my baby in. Earlier this week, New York City Mayor Bill De Blasio declared a public health emergency and made it a requirement to vaccinate children who reside in four Brooklyn zip codes, including my own. There have been 285 confirmed cases of measles in Brooklyn since October.

When the news first broke about the mandatory vaccinations, I didn’t pay much attention — I was distracted by the Israeli elections, and only able to process one piece of nerve-wracking news at a time. But later that evening, as the expected but disappointing results came in, I decided to read the full letter, and found out, ominously, that my family and I were in the ”danger zone.”

As part of my job, I’ve been actively following the news about the measles outbreaks, but I hadn’t given it much thought about what this meant for my family and me. We were vaguely aware that there were more and more cases of measles being diagnosed in Williamsburg’s ultra-Orthodox enclaves, which are within a short walking distance of our apartment.

Though we saw our religious neighbors every day, our interactions were limited. I felt we lived in a peaceful coexistence with them —  haredi women sometimes stopped me to ask why my son wasn’t wearing a hat, or if I was planning on selling my stroller — but, aside from the occasional mom-to-mom smile at the post office, that was basically the extent of our relationship.

That was, until we saw our zip code listed in the emergency order. I realized that our lives did touch each other, in this wholly uncomfortable way. Measles, after all, is highly contagious — in fact, it’s the most transmittable virus known to mankind. I may inhabit a different world than the ultra-Orthodox community, but there was no doubt we were sharing the same air (and zip code).

To be clear, there is nothing “Jewish” about the measles outbreak. Low vaccination rates among some ultra-Orthodox communities is the product of false information that’s easily spread through closed communities — in this particular case, the misinformation is spread through a hotline for mothers (benignly called Akeres HaBayes, meaning “housewife”) and through a professional-looking anti-vaxx pamphlet by an organization called PEACH (Parents Educating and Advocating for Children’s Health).

After just “a little pinchy,” as our pediatrician says, my son wails for a total of 5 seconds, and then is his happy, contented self. “In an hour he can go out on a walk, like normal,” the doctor says. But then, he backtracks: “Though it takes two weeks for immunity to build, so maybe take your walks further away.”

And so, my little one goes off with the nanny on a playdate on the other side of the neighborhood, the one that doesn’t have to vaccinate.

Meanwhile, I head home, my heart on fire. I feel like I want to sink into my bed and never reemerge. I suppose, for many moms, the logical reaction is to be angry, furious at these other parents who have put my child in danger, who are forcing us to alter his vaccination schedule out of fear of him getting a potentially deadly disease.

But I’m not angry. Mostly, I’m tired. I’ve spent the last couple of weeks on corners of the internet, reading about the measles vaccine, and feeling discouraged by how many anti-vaxxers seem to be out there — and they are loud, and many of them do not want to change their mind, no matter what the science says. On threads across the internet, they tag fellow anti-vaxx mothers, to share misinformation about measles and the MMR vaccine. Many of their facts can be refuted with reputable studies, but they always seem to move the bar, wanting a different study they know does not or can not exist, coming up with yet another bit of fake trivia about the vaccine the reader has to scramble and disprove. It’s too much.

But when you’re parenting a baby, there’s no time to be overwhelmed. I can’t spend my day furling and unfurling comment threads. I have to be there for him, to make the right decisions — like giving him the MMR vaccine, like maybe hanging out in different parts of Brooklyn for the next two weeks. Like doing everything I can to keep him smiling, healthy, and growing, which is what every mom wants for her child.