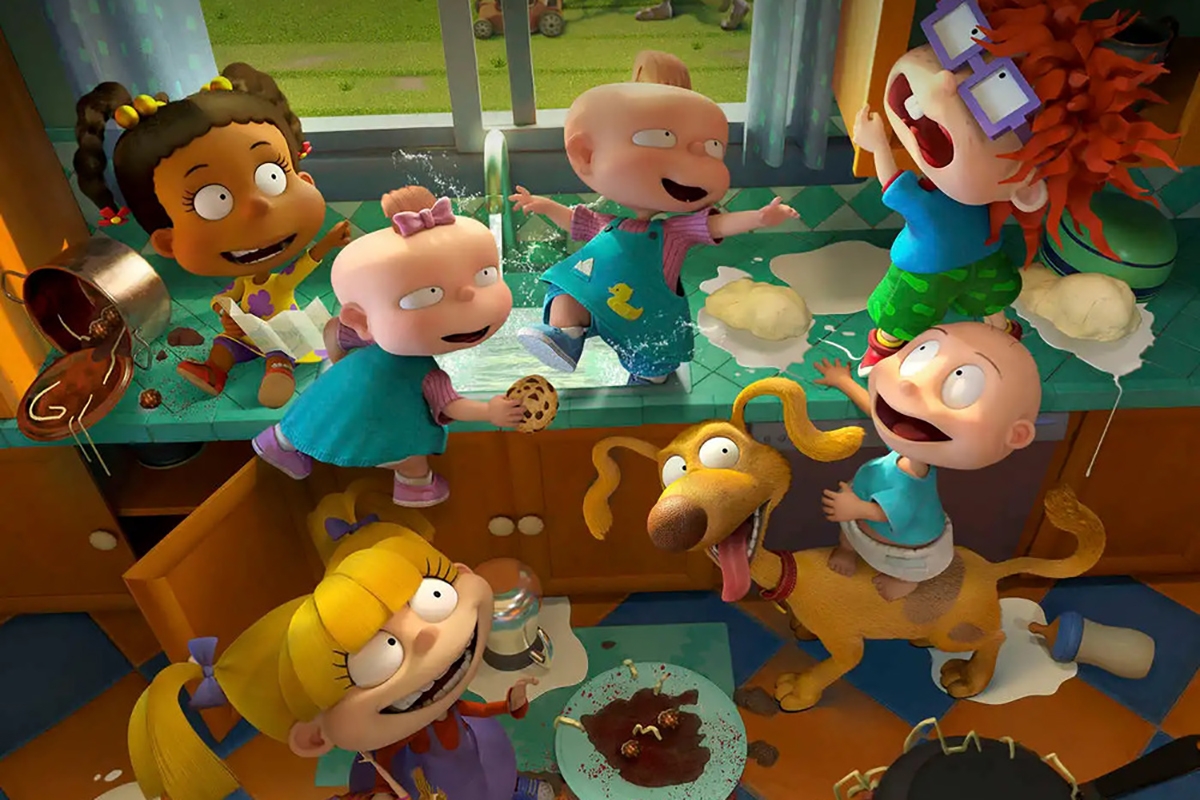 My fellow millennials and I have it rough in a lot of ways, with our compulsion to buy avocado toasts and fancy lattes, our inability to afford housing, childcare and all that good stuff, and our being too old for TikTok (luckily, we don’t care about the latter — we’re still there all of the time). Yet there is one thing we have in abundance — a bunch of excellent animated kids’ shows to feel fondly nostalgic about.

Yes, we grew up in the Golden age of TV animation. The age of “Doug” — a show that makes me sometimes want to cry because I love it so much — and “Hey Arnold!,” “Arthur” and so much more. At the top of the list for a lot of us is perhaps “Rugrats,” one of the longest-running animated shows in history, and a show that brought us wonderful Jewish episodes like “A Rugrats Chanukah” and “A Rugrats Passover.”

The premise of “Rugrats” is deceptively simple — the adventures of a group of babies trying to figure out the world. There’s the intrepid Tommy Pickles, his very much not intrepid bespectacled best friend Chuckie, and sassy, dirt-obsessed twins Lil and Phil. Then, of course, there’s Tommy’s older cousin, the fierce toddler menace Angelica Pickles, part bully and part link to the adult world (OK, yes, the bully part was much more prominent).

The magic of “Rugrats” was that it was both captivating for children and adults, a commentary on what it means to be a child — when it feels like you speak your own, separate language — and on what it meant to be a parent in the early ’90s. Created by real-life parents Arlene Klasky, Gábor Csupó and Phil Germain, the babies’ parents and caregivers are an integral part of the show, even though they seem to lose track of their kids more than is realistically plausible.

The show struck a magic chord — it managed to be highly diverting, not at all condescending to its younger viewers, a little creepy and haunting (Klasky and Csupo were also the creators behind the wonderfully creepy “Aaahh!!! Real Monsters”), a little icky and very, very charming. And for a lot of millennial Jews, it made us feel seen in a way that few others animated shows did, putting an interfaith family at its center (Didi, Tommy’s mother, is Jewish, while his father is not).

This is why many of us probably met the news of a recent “Rugrats” reboot, which was announced in 2019 and started airing in May of 2021, with great trepidation. Because, how — how — do you beat something like that?! Yes, “Rugrats” had a sequel — “All Grown Up!” — which, while lovely, didn’t manage to surpass the OG. But it has been over two decades since the show first aired, and this new reboot promised to bring us the same babies — into the 2020s. The fear may have been somewhat assuaged by the fact that Klasky and Csupo were behind this new reboot, too.

But then, we found out that the new “Rugrats” was going to be computer-animated. I’ll be honest: First pictures of the show filled me with dread. Seeing these reimagined 3D babies discombobulating and eerie.

Still, as a millennial now with kids of my own, I had to give the show a chance. The idea of having my young Angelica-aged son grow up on the same shows that I did, the possibility of him having the same feelings his father and I had while watching it growing up, was too hard to resist. I heeded the siren call of the familiar orange stucco house (now in 3D, but still a total mess) and put it on one night.

I was promptly captivated.

First off, I have to admit, I took to the 3D-fication must faster than I initially expected myself to. The show is definitely more gorgeous and lush than uncanny valley. The subtle movement of Chuckie’s and Didi’s hair, the richness of blades of grass, the worn carpet — watching this show as a grown-up is actually a visual treat, much in the same way that the ’90s and early 2000s show was meticulously detailed and masterfully crafted. It’s not all perfect; Tommy does feel a little eerie, and Angelica’s hair is decidedly too shiny, while Stu’s hair is a little too… purple. But all in all, the CGI-updated version still feels soulful.

While the characters all live in 2021, with vacuum robots, smartphones and tablets, so many familiar details remain from the original — the babies’ outfits are still the same, the house is still that same suburban orange, Angelica’s Cynthia doll is still as creepy and delightful, and of course, Reptar is back, along with healthy kale Reptar pasta, because 2021 in California requires kale. Also back? The magical voices of your childhood. Elizabeth Daily returns with the unforgettable squeaky voice of Tommy Pickles. Nancy Cartwright is back as sweet, nasally Chuckie, Cree Summer gives Susie Carmichael her magical raspiness and Cheryl Chase’s Angelica is still just as iconic.

Yet this new “Rugrats” also brings with it star power: Tony Hale as Chas Finster, Anna Chlumsky as Charlotte and Henry Winkler (!) as Grandpa Boris.

While I was captivated by this reboot, many other millennials were decidedly… not. “The New ‘Rugrats’ Is a “Thanks I Hate It” Gift for Millennials” is the (I must admit, rather brilliant) headline of one brutal review from The Ringer, and the show has a 3.6-star rating (out of 10!) on IMDB, with many nostalgia hunters echoing these same sentiments. But I was coming to the table not only as a visual artist, impressed with the lovely textures and details  — but as a millennial parent. I was an important viewer, sure. But it mattered not what I thought of the show if my son was not feeling it.

But he was. He kept requesting for more and more episodes, and when the 10 episodes currently available on Paramount+ were over, he wanted to watch them again. It was perhaps his enjoyment of the show that made me more open and willing to find my own joy in it.

While there are some annoyingly lazy jokes about Gen Z, I still feel like the show captures some experiences of millennial parenting right, even if it does nothing to convey our constant existential malaise (honestly, I am quite jealous of Didi and Stu for being able to provide childcare for their children, and also having grandpa Lou, now a tie-dye wearing yoga-lover there to help — it’s a privilege many millennial parents lack). But the show still captures our parenting doubts and the onslaught of expectations and opinions that we have to deal with. And it also shows some of the surprising moments of magic that come with being a parent right now.

One of the more darling episodes is called “The Bubbe and Zayde Show” and features Tommy’s Jewish grandparents, Boris and Minka, dubbed by the aforementioned Winkler and Swoosie Kurtz. In the original show, they are immigrants from Eastern Europe, much like Klasky’s own family. But here, in this 2021 version, Boris and Minka live in Florida — the state of retired Jews — and instead of old country accents, they have a noted Brooklyn one.

“The Bubbe and Zayde Show” refers to Tommy’s daily video call with his distant grandparents. As they talk to him, they put on a show especially for their young grandson, complete with sock puppets and funny voices, and Tommy sits, mesmerized, looking forward to their virtual presence every day.

More than anything else in the show, this episode captivated me for how well it got this dynamic right: of love and longing, the confusing dissonance of having family appear for visits, then disappear again behind the screens. As someone whose parents live far away, I often put my own children in front of a device for the Safta and Saba show. It is their most important means of connection with their grandparents, and the episode captures that loveliness so well.

Another Jewish episode is “Traditions,” a holiday episode that features both Hanukkah and Christmas. It doesn’t offer the same detailed, comprehensive Jewish content that the original holiday episodes do, but instead, is a lovely embrace of interfaith celebrations, bowtied by a lovely speech from Grandpa Boris about the light we find in new traditions.

Lately, putting my son in front of the TV after a long day of work has been just a needed respite. Mostly, I merely tolerate the shows I put on, absently lifting my head once or twice to look at what’s on the screen. I drudge through things like “Mickey Mouse Clubhouse,” which I see having a positive effect on my son despite how grating it is. I’ve vetoed “Paw Patrol” and “Cocomelon.”

But it’s nice to have a show that we all as a family can enjoy. A show that we actually watch together. After every episode, I find myself absentmindedly uttering some variation of, “Well, that was lovely,” which is a thing only one other kids show elicits from me — the medicinal “Bluey.” Yet, whereas “Bluey” can sometimes feel a little too earnest, “Rugrats” strikes a good grungy balance for me of heartfelt and messy, one that works well for these troubling times.

We’ve gone back to the old episodes of “Rugrats,” too, especially the holiday ones, but my son is more drawn to the reboot, which seems to speak his language a little better. And while yes, it might not hold the exact same magic and memories that the original “Rugrats” does for me — I’m so glad to be able to watch it with him.