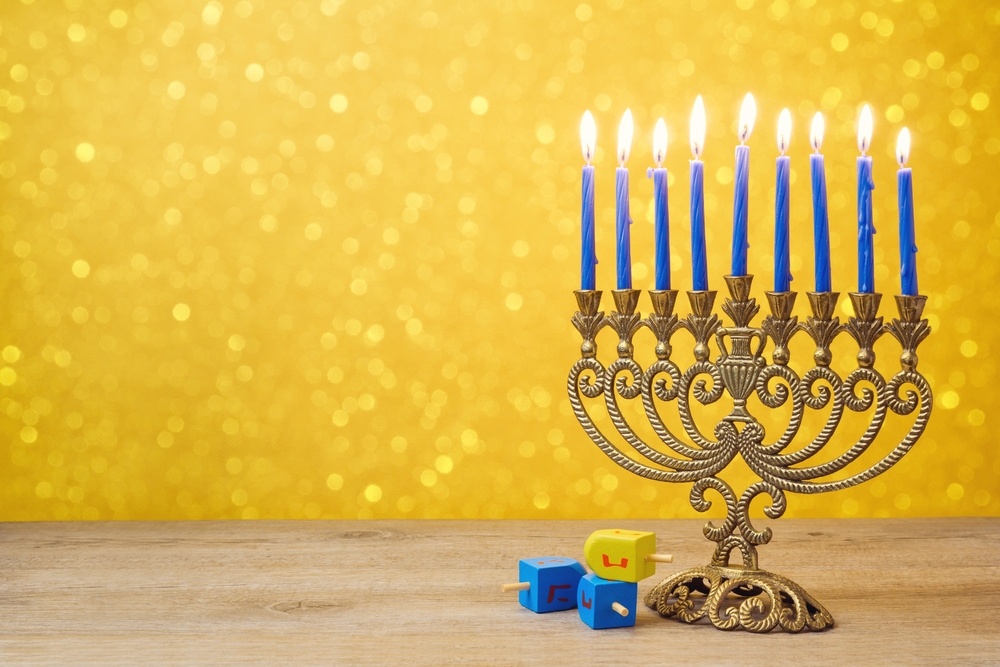 Hanukkah is very special in our home. Our dining room table is filled with menorahs, our house decorated on the inside with blue and white lights. When the kids were little, we’d read a special Hanukkah book every night, before we open our presents, and I’ve learned to make enough variations of latkes so that no one gets sick of them. But outside of our home, it is an entirely different matter, especially during the “December Dilemma.”

We live in a fairly small town with an equally small Jewish presence. For most of our daughters’ lives, they’ve been the only Jewish children in or out of their classrooms. Each year, after Thanksgiving, we brace ourselves for the usual challenge of celebrating our religious tradition in a place that just doesn’t get it. Our daughters have learned to smile politely as store clerks adamantly wish us, “Merry Christmas,” despite our purchases of Hanukkah candles and chocolate gelt. Or the well-intentioned after school director who tried to explain away my protest of Santa visiting the girls’ public school with the logic that Old Saint Nick is not a religious figure.

READ: How Do I Make Hanukkah Fun Without Forgetting the Meaning?

But because our children are the best teachers, our three daughters, each in their own way, have embraced their Jewish faith through small acts of bravery that would have made Judah Maccabee proud.

Our oldest discovered her love of being Jewish after spending her pre-K year at the local JCC. She drew Stars of David on every piece of paper she turned in to her teacher. She wasn’t really aware that she was the only Jewish kid in her class and if she was, she didn’t seem to care. She wore her Jewish-ness with pride.

But one day she left school in a crummy mood. “What’s the matter?” I asked as I buckled her into her car seat. “Nothing,” she said as she glared back at me. I let it go, figuring that whatever it was would come out eventually.

That night after dinner, when we were cuddling on the couch, she said in a plain and simple voice, “I had to write a letter to Santa today.”

I found out that it was a time-honored tradition that the fifth grade class, in addition to being the kindergarteners’ reading buddies, and teaching them to tie their shoelaces, were also assigned to help the little ones write letters to Santa Claus.

“I told them I don’t celebrate Christmas, but they made me write one anyway.”

I took a deep breath.

“Oh, OK. Do you want me to talk to your teacher about it?”

She shook her head no and we went back to the book.

A few weeks later, when it was time for the “holiday” party in her class, we were given handmade holiday presents: a cinderblock Santa doorstop, a snowflake picture frame ornament (albeit in Hanukkah blue, unlike the rest of her class, which were in red and green), and a hand-written letter glued onto a piece of blue construction paper, adorned with Stars of David all around it. It read:

They are making me write this letter, even though I told them we don’t celebrate Christmas and that there’s no such thing as a Hanukkah Fairy. For Hanukkah I want an American Girl doll, books and a Star of David necklace.

I looked across the room at our curly-haired girl who was happily munching on a cookie. I held up the letter and she beamed back at me. She got that Star of David necklace, one she proudly wore on the first day back from winter break.

The time had come for our twins’ second grade classes to do their presentations on family holiday traditions.

To say the twins don’t like being in front of people is an understatement. At 4 years old, they both burst into tears during a dress rehearsal for a dance recital and never made it to the final performance. Maedée was scheduled to be the first of the two to do her presentation. When I asked her what time the presentation was, she told me—9:30 in the morning.

“That’s right in the middle of the weekly staff meeting. I‘ll do my best to get there on time.

READ: This Year, Hanukkah Is Going to Be Different

I set the alarm for 5:15 a.m. and struggled with how to figure out how to make the staff meeting and get back to her school in time for her presentation. While I sipped my coffee, I peeled apples, added the orange juice, sugar, cinnamon, and flour, and heated up the griddle. The girls woke up to the sweet smell of apple latkes.

She listlessly ate her breakfast.

I looked into her big brown eyes and understood how huge this was. To not only be 7 years old and standing up in front of your classmates, but to be standing up to talk about being Jewish in a town whose Target doesn’t carry Hanukkah supplies made me understand that no matter what was going on at work that day, I was making it to that presentation.

We drove to school. I held her hand as she got into line and delivered the latkes to her class. The class came in and quickly got to their seats. After the pledge of Allegiance and then the school pledge, Maedée quietly came to the front of the room and took out her presentation.

She’d chosen five Hanukkah images—a dreidel, latkes, gelt, a menorah, and sufganiyot—and written with simple elegance about what each meant to her. She took out the menorah and showed it, explaining where the candles go and how we light the Shamas. She showed her class her dreidel and with perfect pronunciation, explained the Hebrew letters, shin, nun, gimmel, and hay, and how the game was played. I passed out the still warm apple latkes and she smiled as they munched and murmured ‘yum’ at this strange new food. She went back to the front of the class and began to answer the questions that the class was bursting to ask, like a real pro.

READ: 8 Ways to Celebrate Hanukkah That Aren’t About the Presents

She nodded at me that it was OK for us to go, that she was fine. She didn’t need to have her back to the class anymore. That morning’s Hanukkah miracle was that a little girl named Maedée found the light of her bravery to stand up and share her faith, her little candle.

On the last day of Hanukkah, it was the second of our twins, Julea’s turn to present. Like her twin sister, she is also ill at ease in front of others.

As we drove to school, I checked the rear view mirror. She was literally green at the gills.

“I just need some fresh air,” she answered to my frown.

I cracked the window. I parked the car and she held my hand extra firmly as we crossed the street. A classmate said hello and she loosened her grip. The color was coming back into her cheeks.

Her father and I arrived back at school right at 10:10 for her 10:15 presentation. Julea ran over to us and invited us in.

Julea sat down in her teacher’s chair. In a very quiet voice, she talked about our family lighting the candles, playing dreidel, eating latkes and gelt. She showed them how to spin the dreidel and explained what the letters meant. She explained the history of the Maccabees, their search for oil and how God made the miracle of the oil that miraculously lasted eight nights. She handed out the gelt and finished up with a confident smile.

We stayed for two more presentations, soaking up the sweetness of the class. With Julea on my lap, we listened to one boy talk about how his family decorated a tree the same way every year. We leaned in together as another child shared details about two generations of his family and their Christmas Eve candle lighting ceremony.

My three children, in their own individual ways, reminded me of the miracle of ritual, of lighting candles for the past, present, and future, and of the simple act of believing that miracles exist and that they are all around us.

READ: 5 Fun Foods You Need to Serve at a Hanukkah Party

Even when it feels hard and lonely living a Jewish life in a place like Longmont, my children have taught me that there is no separation between us and the lights of the Hanukkah candles. Eight little candles casting so much light, love, and hope.