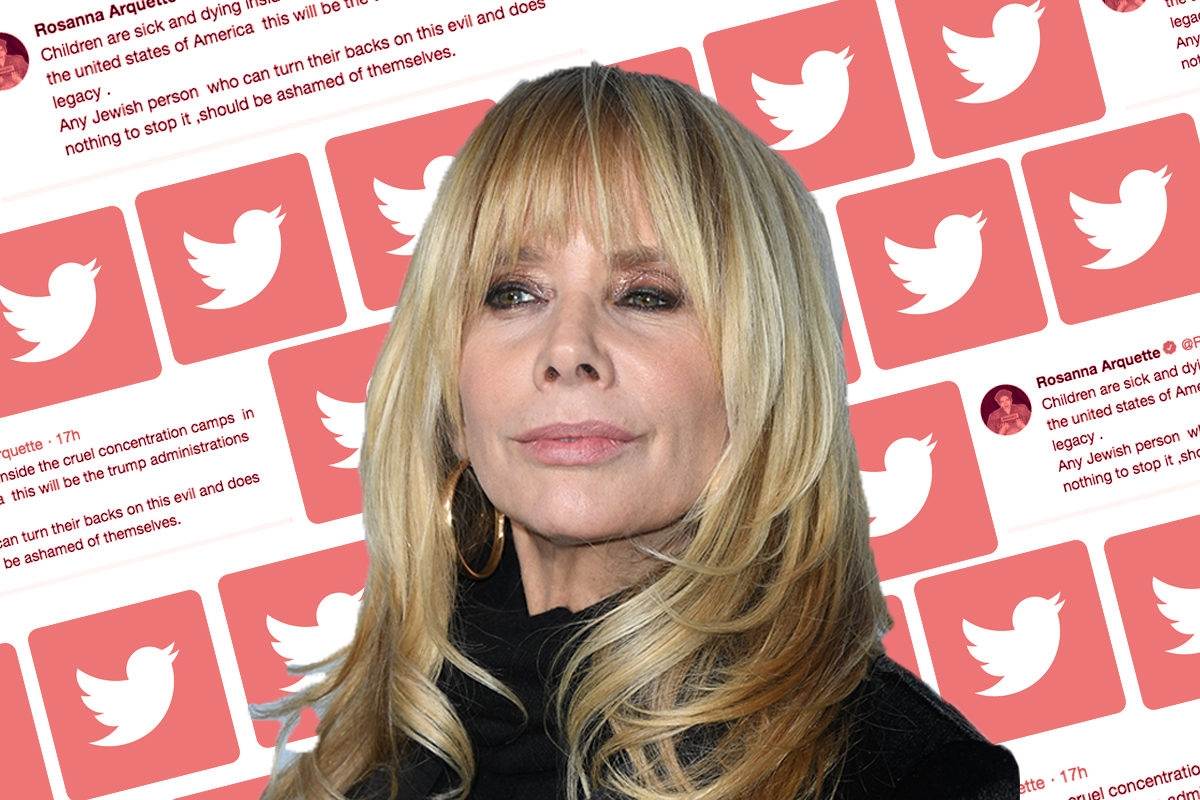 On Sunday evening, actress and Jewish mom Rosanna Arquette tweeted about the crisis at the U.S. southern border.

“Children are sick and dying inside the cruel concentration camps,” she wrote. “This will be the trump administrations legacy.”

But she didn’t stop there: “Any Jewish person who can turn their backs on this evil and does nothing to stop it should be ashamed of themselves,” she added.

(The tweet was later deleted, less than a day later.)

Ignoring the debate over the use of the term “concentration camps” when describing the horrible conditions at detention centers for migrant children, Arquette’s singling out of Jewish people upset, well, a lot of Jewish people.

On Twitter, many were quick to point out that she shouldn’t have just called out Jewish people, because it plays into anti-Semitic tropes. (You know, the one where Jews are responsible for all the world’s evils.)

Sara Gibbs, a British Jewish writer, tweeted at Arquette: “How can you simultaneously talk about social justice & ignoring concentration camps while stoking racial hatred against Jews & scapegoating them as a collective? What kind of rhetoric do you think leads to the very issue you’re rightly condemning?”

To which Arquette responded: “Because many are upset that we use the words concentration camps,I’m a Jew for your information.”

Gibbs then responded in an eloquent thread about how many Jews aren’t upset over the use of “concentration camps,” and how Arquette’s singling out of Jews plays right into the “language of anti-Semitic tropes.”

You’re not addressing your congregation, you’re talking to the wide world in the language of antisemitic tropes, where Jews have an increased social responsibility, and given the glee from antisemites in your mentions, I’m not the only one who read it that way.

Another tweeter responded to Arquette angrily, writing, “Take out word Jew & insert any other minority word. You’d never post that. How to make a valid political point Then shoot it in the foot (and the head) #racist.”

Similarly: “This is gross antisemitism. You should delete and apologise.”

The intent of her tweet was good — Jews should be upset about what’s happening, especially because of our history! — but the execution was really poor. It allows anti-Semites to re-tweet it, as if to say, “See! the Jews are responsible for what’s happening.” If Arquette had simply written “any person,” not “any Jewish person,” we wouldn’t be having this conversation. Or, she could have made it clear she was speaking as a Jewish person and weighing in on the debate within the Jewish community.

In her responses, she tried to clarify she was discussing about Jewish organizations who are saying these are not concentration camps: 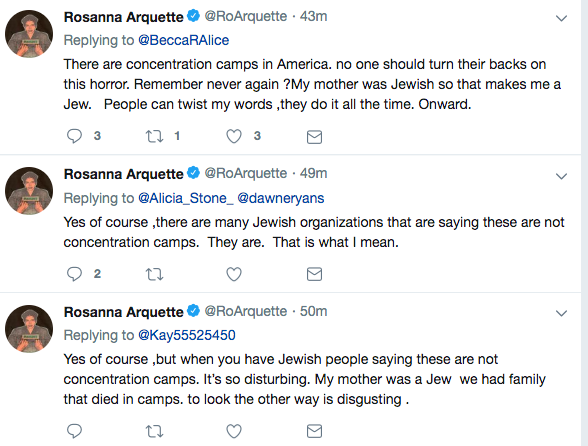 She mentions that her relatives died in the Holocaust, which is why Jewish Americans must “never turn our backs to what is happening.”

Still, you have to go looking for these responses — they don’t pop up on her main feed. If she had just made this clear in the first place, we wouldn’t be in this mess!

So many people continue to respond with confusion to her tweet. Take how Rabbi Jill Jacobs, executive director of T’ruah, responded:

Wait…what? Jews have been out in front on this. @truahrabbis @TheRAC & @bend_thearc were protesting in Homestead last Sunday. T'ruah has taken 4 delegations of rabbis to border, 2 together w/@HIASrefugees. 70+ synagogues are in T'ruah sanctuary network. https://t.co/b3HqYtF8h9

Arquette seems to be frustrated that Jews are not heeding the call of “Never Again.” While it is true that some Jewish organizations object to the use of the term “concentration camps,” the fact remains: Jews are taking action!

In another response, however, Arquette doubled down. “People can twist my words, they do it all the time.”

There are concentration camps in America. no one should turn their backs on this horror. Remember never again ?My mother was Jewish so that makes me a Jew. People can twist my words ,they do it all the time. Onward.

In yet another tweet, she decided to discard her focus on being Jewish:

The United States of America is holding babies toddlers and children in barbaric conditions in concentration camps (yes that is what they are. )abusing and traumatizing them. The world is watching . Do something. This is a violation of human rights.

Which, great! She is right: The situation is atrocious, and all of us need to do something. But next time, Rosanna? Maybe try to not inadvertently tweet anti-Semitic tropes when you’re trying to shine attention on a worthy cause.