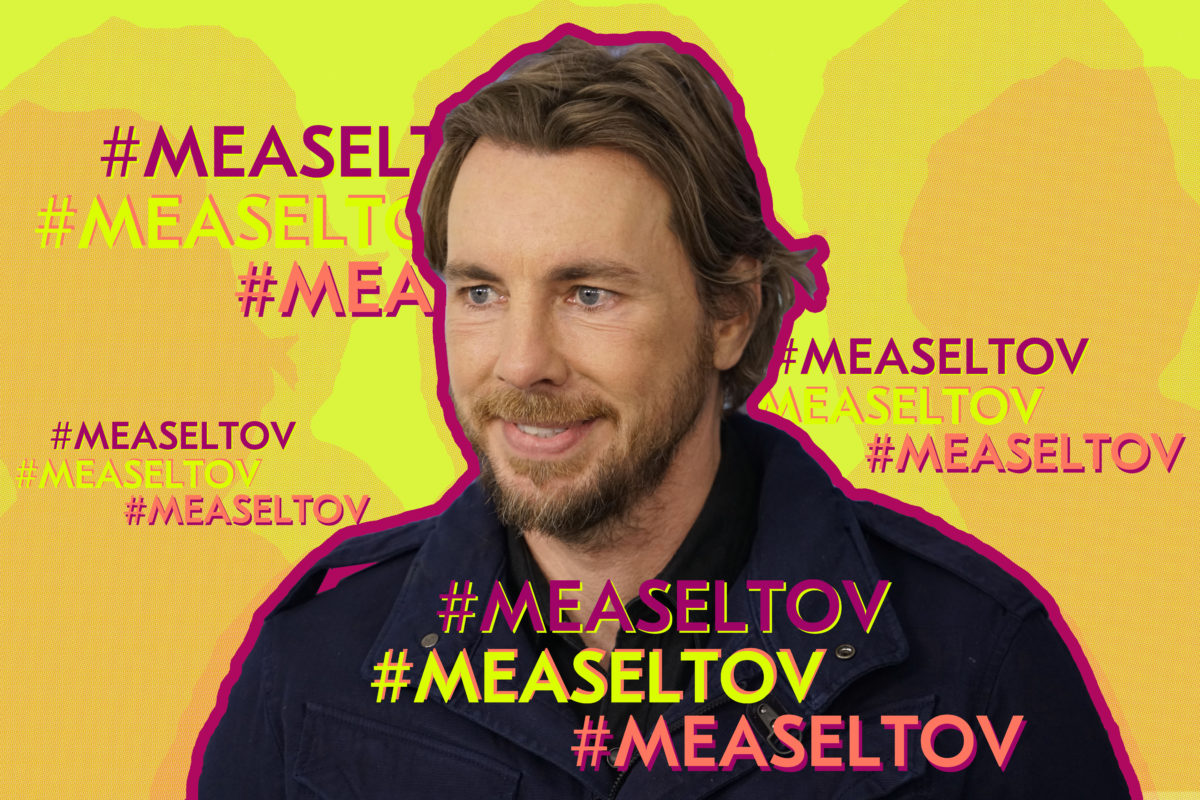 My love for celebrity couple Dax Shepard and Kristen Bell goes way back to, well, before they were a married couple at all! I’ve loved Shepard since his days in the drama Parenthood, and I’ve loved everything Bell has done since Veronica Mars. I think they are adorable together — this sloth video will forever remain one of my favorite things. I also love Shepard’s new-ish podcast, Armchair Expert, which features smart, revealing interviews with some of my (other) favorite celebrities.

But a recent tweet by Shepard gave me some very uncomfortable feelings, which I would like to unpack. Before I begin, I’d like to be clear that I still love Shepard, and I do not, at all, think he’s an anti-Semite. However, his use of a Jewy hashtag in a tweet about the measles outbreak has made me a little queasy.

Yesterday, Shepard tweeted an excellent rebuke to anti-vaxxers: “I have a hard time keeping my opinion to myself if someone was telling me their 8 month-old did not need a car seat,” he tweeted. “The same hard time I’m having currently with anti-vaxxers.” Totally spot-on, right?

Shepard ended with two hashtags, #yourenotapediatrician (fair!) and, um, #measeltov — the latter of which many a Twitter user found hilarious. But for me, it felt, well, kind of gross.

I would have a hard time keeping my opinion to myself if someone was telling me their 8 month-old did not need a car seat. The same hard time I'm having currently with anti-vaxxers. #yourenotapediatrician #measeltov

Now, I’m Jewish, and I’m also very pro-vaccine — as most Jews are, actually. I also live in the middle of the measles outbreak in Brooklyn, and therefore had to get my infant son an early dose of the shot at 8 months. (And he recently got a second dose of the vaccine.) I live adjacent to Williamsburg’s ultra-Orthodox enclave — where vaccines are currently mandated for all humans over 6 months, and where religious exemptions for vaccines have just been made illegal. (Though, to be clear, there is no Jewish reason not to vaccinate.)

But here’s the thing: All my Jewish friends in the city — and in my neighborhood — do vaccinate, and have long been pro-vaccine. And so a hashtag which riffs off the most ubiquitous Jewish greeting of all, “mazel tov,” in a tweet about anti-vaxxers — and which literally means “measles good” — feels in very poor taste.

You see, the anti-vaxxer phenomenon is not at all a Jewish one. Most Jews — like so many others who live in areas where there’s an outbreak — are upset about anti-vaxxers putting their children, and ours, at risk for a potentially fatal disease. But Jews in New York are facing anti-Semitism because of the outbreak, with one bus driver refusing to pick up an Orthodox passenger in his neighborhood, and an Uber driver calling an ultra-Orthodox mom “one of those f**king measles people.”

And while the outbreak is happening in New York’s ultra-Orthodox Jewish enclaves, this is not a Jewish issue. It’s happening among some ultra-Orthodox communities due to people living in close quarters and having frequent,  interpersonal gatherings — the disease is airborne and the most contagious one known to man. There is also a somewhat lower vaccination rate in the ultra-Orthodox community due, in part, to a recent, calculated spread of anti-vaxx beliefs through pamphlets, a hotline, and these insane anti-vaxxer “symposiums.” But refusing vaccination has nothing to do with Jewish law, and the outbreaks in the U.S. and the world is not isolated to the Jewish community.

Shira Pruce, who wrote on Twitter that Shepard’s hashtag feels anti-Semitic, also noted there are many in the Jewish community who are doing their best to combat the outbreak, like this group of Orthodox nurses.

#measeltov feels anti-Semitic to me. There are great Jewish nurses and community members hard at work to fight the anti-vaxxers in our community. We aren't the only community where this is happening, but we are the only visible minority group going through this. https://t.co/jkDH4wtq5K

I’m pretty sure Shepard didn’t mean to do this, but he unwittingly helped further the stereotype that Jews spread illness. In fact, it echoes old conspiracies about Jews spreading death and disease that date as far back as the Black Death in the mid-1300s. (Which, for the record, was neither started nor spread by Jews.)

We should all be fighting the measles outbreak in any way we can, mostly by vaccinating our kids! But we should also be weary about furthering anti-Semitic stereotypes. In our current political environment, it’s the last thing we need.