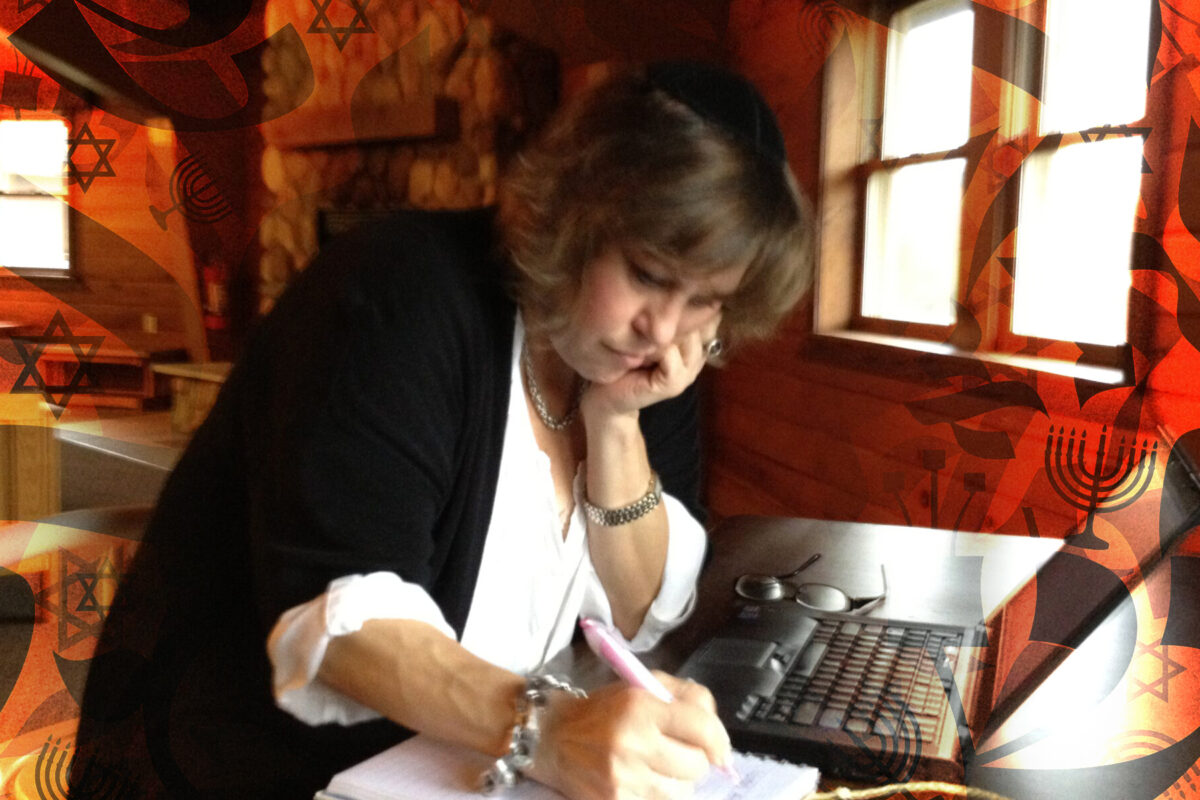 Our hearts are broken: Writer and poet Stacey Zisook Robinson passed away on Monday at the age of 59 from the Covid-19 virus. Robinson was a gifted and evocative writer who wrote deeply moving Jewish poetry and, in recent years, she was working on making her childhood dream of becoming a rabbi a reality.

She leaves behind her son, Nate; her father, Sheldon Zisook; and a brother, Mark Zisook; and many loving and admiring friends and colleagues.

My gifted, generous poet-friend, Stacey Zisook Robinson,
who exceeded every measure, has died of COVID-19.

I will miss you. Lifting up your last to words to me:

"God is ever present in the looking up through impermanent boughs and the looking down to our mother who holds us."

Robinson wrote for Kveller between 2015 and 2017. In her last article for us, she wrote with humor and grace about her many health struggles, and why she is grateful for Obamacare:

“The diabetes is the worst offender,” she recounted, “but there’s also neuropathy and retinopathy, asthma, fibromyalgia and rheumatoid arthritis. I can never build an ark again, due to cubital tunnel syndrome on top of carpal tunnel, golf elbow, and tennis elbow in both arms. Who knew I was so athletic?”

Robinson wrote about a myriad of topics. She wrote moving recollections of conversations with her Black Jewish son, Nate, in which she grappled with her own privilege and her inability to protect him. She reminisced about her bubbe’s kreplach, and the impreciseness and deliciousness of Jewish “recipes” passed from on generation to the next.

She made us laugh heartily and nod at the relatability of a piece about what grocery stores get wrong about Hanukkah, which resonates with our audience every Hanukkah.

“You’d think, after all this time, after the science that marketing has become… these grocery stores would at least learn to distinguish which Jewish holiday requires matzah, which require menorah candles, and when to lay out the yahrzeit candles (hint: people die year-round),” Robinson kvetched, rightfully.

More recently, every Friday, Robinson shared moving reflections and poems with our Kveller Moms Facebook group. These same poems she shared with friends and colleagues in e-mails, personally addressed, that touched everyone in a their own personal ways, a little ray of sunshine in words ahead of Shabbat.

“Her language was at once deeply personal and also exquisitely universal. Somehow reaching from within the Jewish tribe into the cadence of Hebrew while writing in English, Stacey’s poetry is everywhere, her colleagues and friends have been praying through her words for quite some time,” her friend Rabbi Menachem Creditor said in a moving tribute video in which he recites one of her poems, “A Prayer For Hope.”

Robinson also wrote the words for Chava Mirel’s beautiful song “Come,” based on the Barchu prayer.

“I think that there was a kind of universal way or lens that she was looking at our traditional liturgy and texts, and the vulnerability and kind of humanity that she saw in the prayers,” Mirel told our partner site, JTA. “She saw it as a way that we welcome each other into the space of gratitude.”

“Sometimes I will sit and really contemplate one of her interpretations of a traditional prayer,” Kveller contributor Rabbi Rebecca Einstein Schorr told JTA, “She was just remarkable.”

We are so grateful for Robinson’s beautiful, moving words, and know that her many Jewish texts will continue to live on. May her memory be a blessing.

You can find Robinson’s writing in Kveller, on her blog, as well as in her three books, In the Beginning: A Poet’s Vision of Genesis; A Remembrance of Blue: 36 poems for prayer and celebration; and Dancing in the Palm of God’s Hand: Reflections on meaning, faith and doubt.