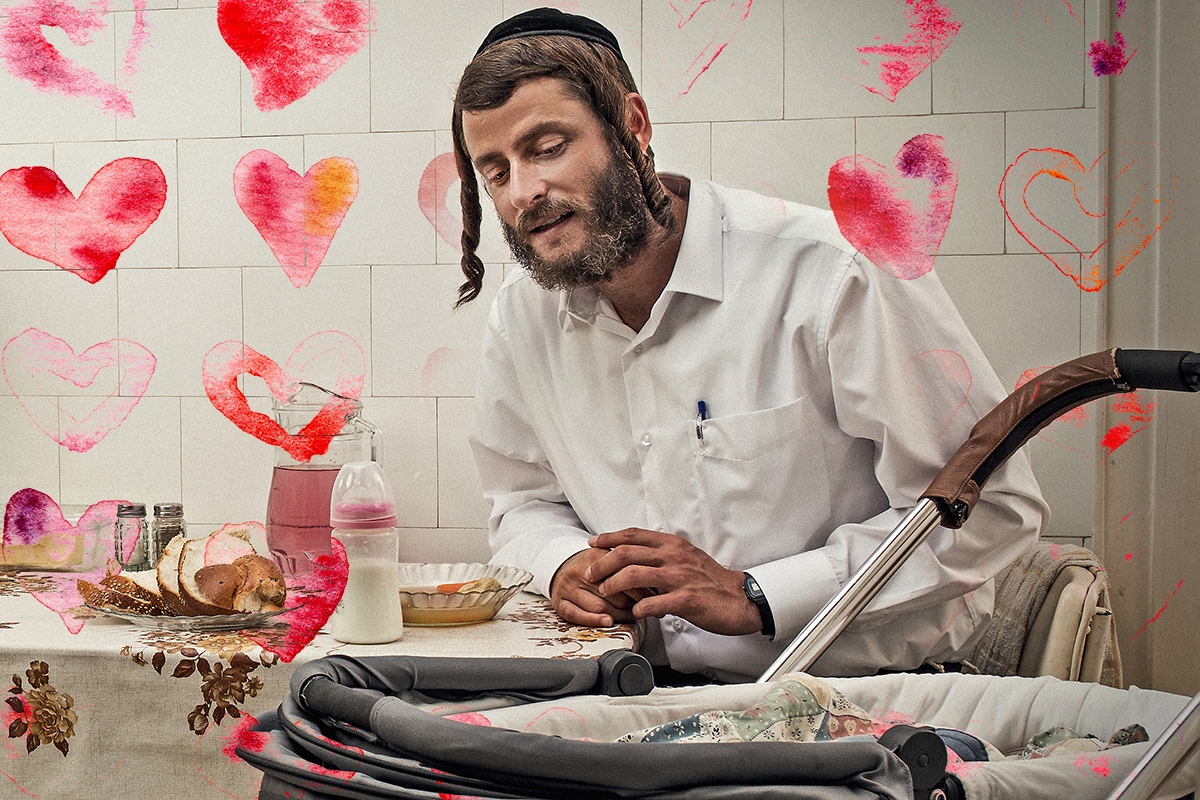 If you’re anything like me, you can’t get enough of Michael Aloni. Sure, the Israeli actor is easy on the eyes, but he’s also talented and captivating as heck. Aloni is known for playing a pretty fascinating dad in both his hit Israeli shows. In “The Beauty Queen of Jerusalem,” he plays Gabriel Ermosa, a father of three who is particularly devoted to his oldest daughter. In “Shtisel,” his character, Akivah AKA Kiveh, is the widowed father of a baby who is mourning the loss of his wife and struggling to raise his child by himself.

In real life, Aloni, 38, is not a father — though he is in a committed relationship with Moriya Lombroso, a neuroscientist who worked at a medical start-up, whom he met through the Midburn (the Israeli version of Burning Man) community, and the two do have a pup, Bruce Aloni, whom they raise together.

In an interview on the “Galit and Ilanit” show this month, Aloni shared his thoughts on fatherhood with TV hosts Anna Aronov and Ilanit Levi Sade and revealed that on set, he is quite the baby whisperer.

“I’m ready to be a father; one day I have to create that, too,” said the actor, who is also a filmmaker and novelist (Aloni recently finished working on his second directorial project).

He admitted that playing a dad on set has been a pretty sweet experience for him: “The truth is that I am a standout dad,” he said. “I am known as the father of the year on set.”

“On the third season of ‘Shtisel,’ we got twins who actually played the daughter of Akiva, my character. Every time one of them cried, I just calmed them down, talked to them, played with them,” Aloni told Aronov and Levi. “But it’s good for the takes. Afterward, I give them back to mom. On set I’m good, in real life, it takes me a moment,” the actor admitted.

He also said that Lombroso, who is 10 years his junior, would be happy to hear his response to the question. He was self-effacing about dating her, saying that she is actually smart — in contrast to him, he implied. “Look what a brain she has to study,” he said, and then pointed at his own head: “They still haven’t found it.”

Still, a child might not be the next step for the popular actor, who won us over last year as an Israeli businessman in “Scenes from a Marriage.”  Back in 2021, Aloni said he still wasn’t there when it came to having kids, but also said that while getting married is of no interest to him (“the next big step is deciding to bring a child into this world”), Moriya does want to have a Jewish wedding ceremony — “if we get commited, it will be by the book,” he explained.

Aloni is currently starring as Charlie in “Love You Charlie,” a romantic comedy in which he plays Charlie, a passionate film director, who gets entangled with a local mafioso. Aloni co-stars in the film with Israeli pop star and future Eurovision representative Noa Kirel and international Israeli star Alon Abutbul. He also reunited with his “HaShminiya” (the teen show that he first rose to fame in) costar Adi Himelbloy.

In addition to wrapping his recent short film, Aloni and the rest of the cast of “The Beauty Queen of Jerusalem” celebrated wrapping filming on season two in Tel Aviv this week, in which Aloni, will, undoubtedly, share more of his onscreen parenting chops. We can’t wait.