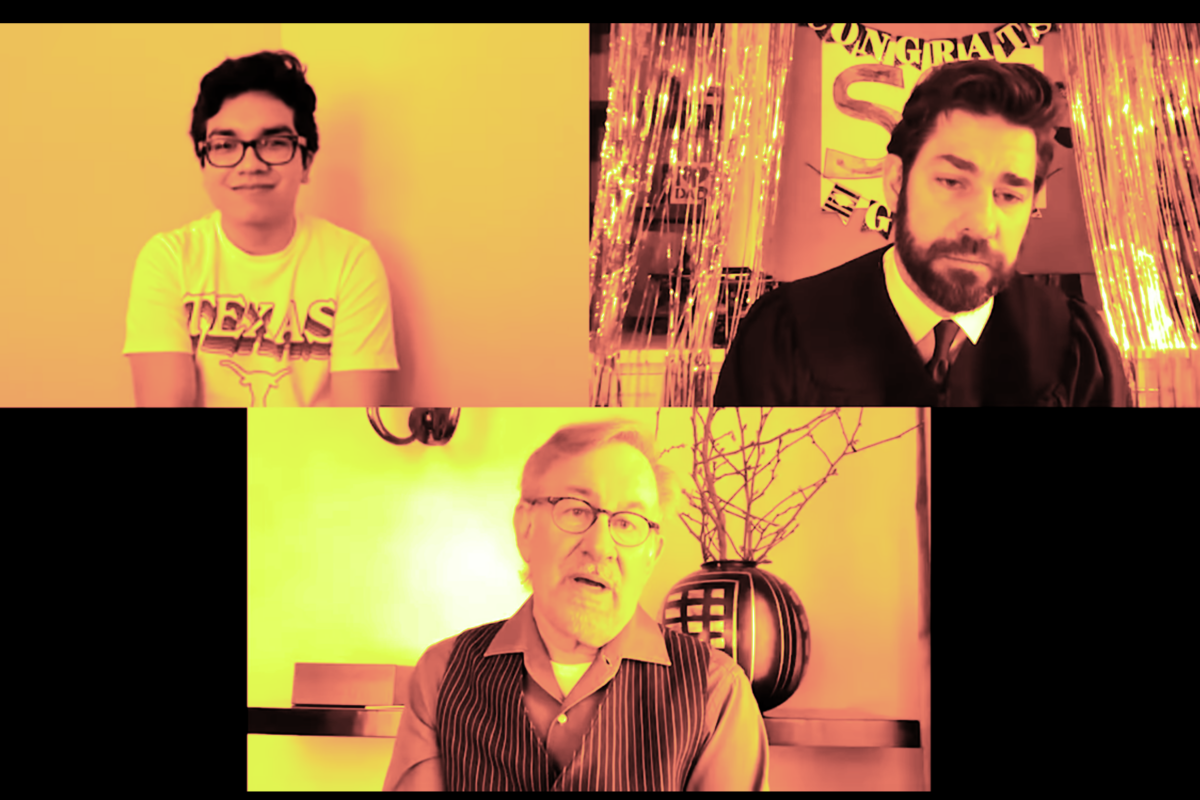 John Krasinski’s new YouTube show is one of the few truly good things to have come out of this pandemic. In SGN, which stands for “Some Good News,” Krasinski tries to bring some lightness to a very difficult time, highlighting heartwarming stories and chatting with celebrities who are also stuck in their homes, connecting them with us “regular people.”

In one standout episode, he surprised a Hamilton fan who couldn’t go to see the musical because of Covid-19 restrictions, with a rendition of “Alexander Hamilton” sung by the original Hamilton cast. (One word: wow!)

More recently, however, in SGN’s sixth episode, Krasinski outdid himself by surprising college seniors whose graduations are canceled with “commencement conversations.” These “conversations” included some of the most inspiring people of our time, including Oprah, Malala Yousafzai, and two uber-famous Jewish dads: Steven Spielberg and Jon Stewart.

Here’s how it went down: Krasinski allowed these soon-to-be graduates to ask their most pressing questions about life after college. The result was a conversation full of candor and intimacy — with the celebs giving tangible advice to these young people, who are both going through one of the scariest and the most exciting time of their lives. And while I may not be a recent college graduate, their words of encouragement certainly filled me with awe and motivation

“I wanted to bring someone who has inspired me my who life,” Krasinski told Ben, a college senior, before bringing Spielberg to their Zoom call.

“Your wish is my command, what can I do for you?” the Academy Award-winning director tells a shocked and giddy Ben.

The young man then asks this heart-rending question: “How do you still follow your dreams when it feels like the world isn’t so supportive of them?”

Spielberg’s response is truly inspiring and inspired: “A dream is a great test,” Spielberg told Ben and Krasinski, “because a dream is going to test your resolve.”

“And you’re going to know a dream from a pipe dream,” he continued. “A real dream not only hangs on to you, but you will hang on to it and it will power you through every obstacle that people and the environment will throw against you. Because if we are in service to our dreams, versus our dreams being in service to us, it becomes something greater, it allows us to be game, it allows us to get over our fears no matter what obstacle is being thrown in our path.”

Beautiful words, though one certainly would not expect less from the cinematic genius. But my favorite advice actually came from retired Daily Show host Jon Stewart, who answered a question from a young man named John.

John asked the question that’s on all new graduates’ minds, though many are too sheepish or insecure to ask it: “Now what?”

“Now what? Let me tell you something,” he began. “The person on Mr. Krasinski’s show, their question was answered by Oprah. So I think it’s clear sometimes in life you will get the short end of the stick. You’re about to enter into a world where, you know, no one is grading you, there are none of those things that are going to be going on. Stop completing things and start living them.”

Wow, that’s some serious sagacious advice, right there. We love it. Congratulations to all the new graduates, and thank you to Stewart and Spielberg for giving them and us the words of inspiration and encouragement we needed.