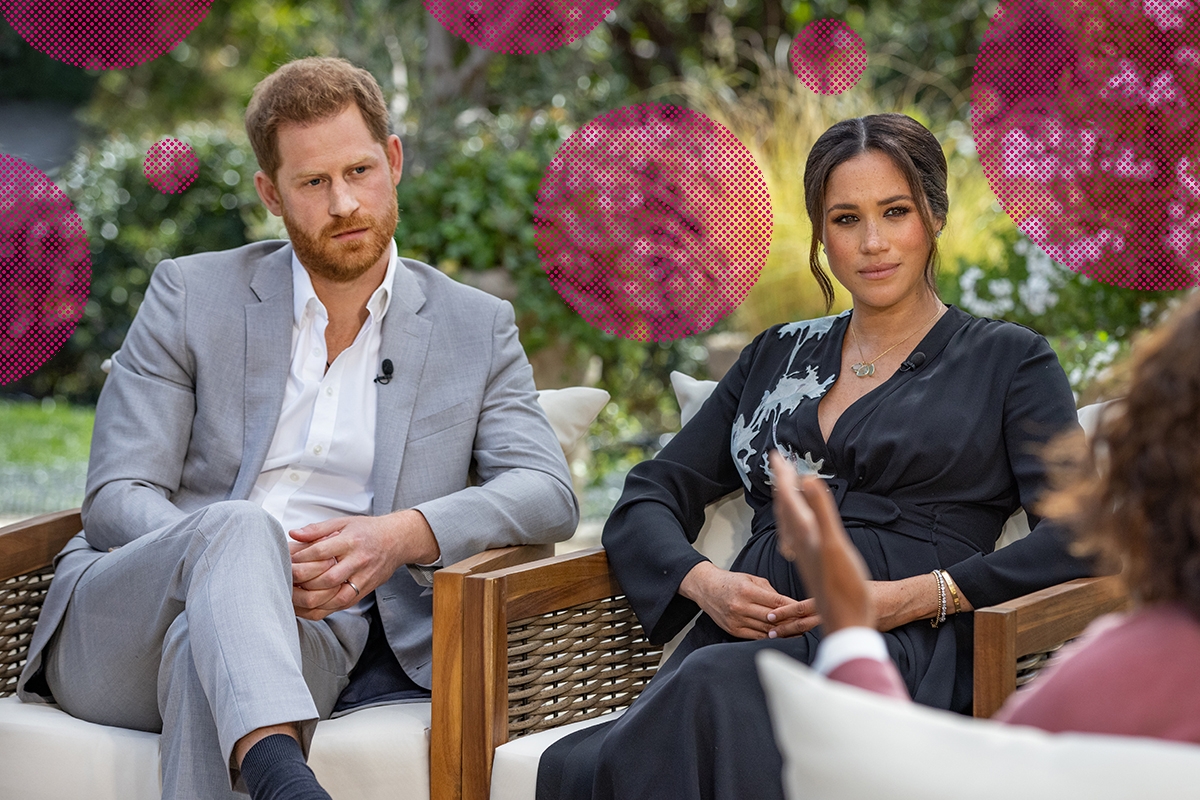 In our prenatal and postpartum lives, many of us have had moments like Meghan Markle‘s night at Royal Albert Hall.

In her recent two-hour interview with Oprah Winfrey, Markle, the wife of Prince Harry and Duchess of Sussex, opened up about a particular breaking point in her mental health crisis while she was pregnant — a night at the famed opera house in London. That night, she wore a black sparkly dress that snuggly fit her baby bump, which she cradled lovingly while smiling at the crowds. How picture-perfect she was, so picture-perfect that a close friend messaged her about how lovely she and Harry looked that night. The pictures from the event were gorgeous indeed. The couple looked radiant and in love, joyful with anticipation for the birth of their first child.

But, as Markle told Oprah and millions of viewers who tuned in Sunday night, that night was a particularly dark moment for her. While the love was certainly there, everything else was a mirage. She had  recently confessed to her husband that for the first time in her life, she “didn’t want to be alive anymore.” That night, feeling completely rattled, Harry offered that she could stay at home while he attended the public event. But she told him she was too scared to be alone — alone with her mind — which after months of relentless bullying from the press felt like it was betraying her.

“I didn’t want to be alive anymore. That was a very clear and real and frightening, constant thought,” Markle told Oprah in that harrowing two-hour interview. So while all we could see were bright smiles and the glow of impending motherhood, Markle looks back to those pictures and sees how tightly the couple held on to each other’s hands, white knuckles visible, grasping for literal life. All she could remember from that night was how every time the cameras were turned away from their royal box, she broke into tears.

Many have remarked about how important it was for Markle to open up about her mental health crisis and her suicidal ideations — which is always an important, destigmatizing, and ultimately incredibly brave thing to do, especially from such a prominent and widely beloved figure. Some have even written about how her candor helped them be open about their own personal struggles.

But as someone who has gone through the same timeline of motherhood as Meghan Markle — my eldest son is less than a year older than Archie, and I, too, am about to have another baby this summer — it feels especially meaningful that she opened up about her mental anguish during pregnancy. Saying you’re suffering from suicidal ideations while pregnant, a time when there are so many expectations on your body, and when the life you want to leave behind is not only fully your own, adds a whole new and excruciating level.

Studies have shown that suicidal ideations are on the rise among pregnant people. One in 10 women experiences prenatal depression, while one in nine women deals with postpartum depression (these conditions are even more prevalent among Black pregnant people, pregnant people who experience poverty, or have experience with comorbidities and mental illness, and teen pregnant people). Suicide is the leading cause of maternal death in the U.S.

Sadly, I don’t find that statistic all that surprising. During pregnancy, there are so many hormones coursing through your veins, so much fear and anticipation in regards to both your physical and mental state. Both of my pregnancies were high risk, and for Markle, both of her pregnancies were technically considered geriatric pregnancy (oof, what an awful term). I’m sure that medical pressure did nothing to assuage the barrage of negativity that was already coming her way, much of which was coming from the family and institution she married into, as we now know.

Is it possible that Markle would’ve suffered through the same mental health crisis without the pressures and physical constraints of pregnancy and new motherhood weighing on her? We can’t really say. But the fact that Markle says these thoughts were previously alien to her does seem to indicate they could have something to do with her prenatal state.

A quarter-century ago, in a similarly candid interview, Harry’s mother, Princess Diana, opened up about something eerily similar: her own experience with postpartum depression. In her now-famous (some say, infamous) 1995 interview with Martin Bashir, she talked about her experiences after giving birth to William:

“It had been quite a difficult pregnancy… Then I was unwell with post-natal depression, which no one ever discusses, post-natal depression, you have to read about it afterward, and that in itself was a bit of a difficult time. You’d wake up in the morning feeling you didn’t want to get out of bed, you felt misunderstood, and just very, very low in yourself,” Diana told Bashir.

Bashir asked if this was out of character for her, and she replied, “Yes, very much so. I never had had a depression in my life.”

In the interview with Oprah, Prince Harry recalled coming back home to Markle in the evenings, before they left their royal duties, and seeing his wife crying while nursing their newborn son.

I’ve had moments like Royal Albert Hall (albeit on a much less public scale) when people told me how glowing I looked, that motherhood suited me so well, while I was falling apart inside. At my first postpartum appointment after a traumatic birth experience, cooing at my son, my OB told me that it looked like the birth had no impact on me at all. “You two are so bonded,” she remarked.

She didn’t know it took me a year not to cry every time I thought about my delivery. She didn’t know the quiet moments of anguish and anger at my body that I still experienced all too frequently. And I was too scared to say anything.

To say that you are not OK when you’re a new parent is a daunting prospect — how can you not be OK when it is your responsibility to raise and feed and nurture a newborn, or even a gestating fetus? How can you put into doubt your competency at doing something that you want so much?

But keeping it private makes it even worse. During her talk with Oprah, Markle opened up about how isolated she was in those years as a royal. She spent months barely leaving the house. It’s something, she confessed, which many had a hard time understanding before the pandemic — while now, a lot of us do.

Being pregnant in isolation is hard. In my last pregnancy, I had occasional breaking points. But in this one, these breaking points come all too often — and it feels like there is no one there to help me through them, aside from an already overwhelmed spouse.

There is no way for me to meet with other pregnant moms, no way for me to get comfort from friends and family outside of FaceTime calls and socially distant meetings that often leave you wanting. Wanting touch, wanting connection, wanting something to bridge the digital divide. After a disappointing diagnosis, a particularly rough day, there was nothing I wanted more than simple moments of respite and comfort that I just can’t attain.

These were all comforts that Markle was deprived of, too.

In both the implications of privilege and race, Markle’s situation is unique. Of course, all pregnant people acknowledge that child-bearing is a privilege, but for years, Markle and Prince Harry were part of a wealthy, privileged (and yes, as some have mentioned, colonialist) institution. It’s a level of privilege most of us can scarcely imagine.

Yet, as the first mixed-race person to marry into this longtime institution, the racially charged bullying that Markle experienced — both from the press and from the royal institution, when they expressed their concern about how “dark” Archie would be — is uniquely awful. And yet it’s also a reminder that pregnant people who are Black are way more likely to experience pregnancy complications, mostly because of racism and implicit bias in the medical field.

It’s been a year since those dark hours for Markle. She has come out of the other side. She found the courage to ask for help from her husband, despite “feeling ashamed to have to admit it to Harry.” She kept asking for help from “the Institution,” while she was in the eye of the storm. Princess Diana, too, tried to get help for the same ails from the royal family — but she never did get the support she deserved, and Prince Harry was worried about “history repeating itself.” That is ultimately why the couple made the decision to leave the royal family, they told Oprah — to leave the toxic environment that created the crisis and to find a sense of normalcy and peace.

Markle didn’t need to go public with the dark place that the bullying, isolation, flagrant racism, and threats that the couple was faced with brought her to. But she has always made it her mission to make others feel seen, just like how she opened up about her pregnancy loss back in November of 2020.

In a piece from the New York Times this last fall, Markle wrote about the importance of asking someone if they are OK. According to experts, that question is actually the best way to catch pre-and post-natal depression.

“We have to ask women how they’re doing during pregnancy and postpartum,” Adrienne Griffen, executive director of the Maternal Mental Health Leadership Alliance, told the Washington Post this week, “We cannot wait for them to say, ‘Hey, I need help,’ because typically by the time they raise their hand and say, ‘Hey, I need help,’ they needed help weeks or months ago.”

Meghan Markle needed help for months, years. In the end, she got it. But only after fighting for it tooth and nail, and only after removing herself from the toxic situation she felt trapped in. As if that wasn’t enough (dayenu), Markle then went on to speak up about her depression in the most public way possible to let others know that there is a reason to live on the other side.

She let others know that, at a time when new and expecting parents are feeling cavernous loneliness and isolation, they are not alone.