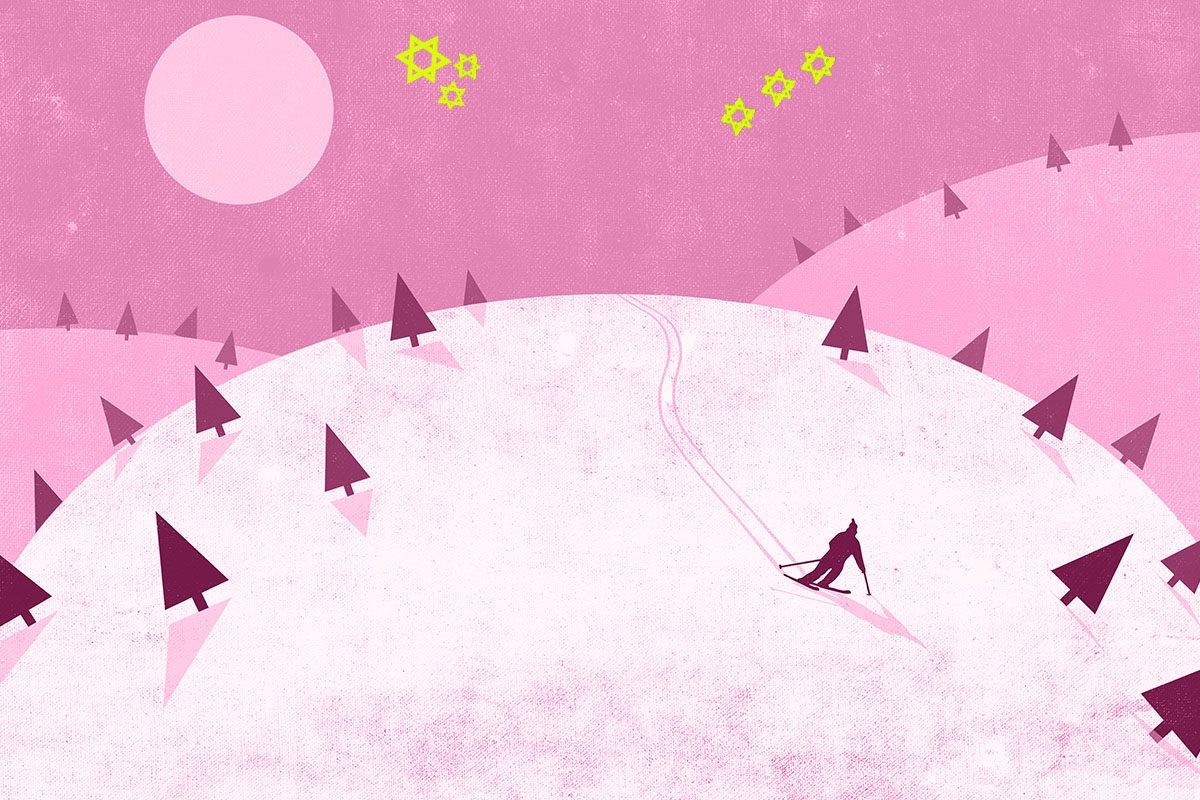 I live in the famous ski resort town of Steamboat Springs, Colorado. Almost daily, tourists say they wish they could move here. They ask what it’s like and most of the time I tell them the truth: It’s four seasons of beautiful, with nature up close and personal, 365 days a year.

Yes, it’s generally quiet and beautiful, which is why I love it. But there are some serious downsides, too — particularly if you’re a young Jewish family. While I’m pretty certain nobody has actually calculated the average age of our congregation, Har Mishpacha, a good guess would be 65-plus. That can be a bitter pill to swallow when you’re planning a far-off b’nai mitzvah and wonder who will be around to attend.

The truth is, most visitors don’t think past our breathtaking landscape. Raising a family and remaining sane while doing so can be quite the challenge here. So, let me tell you what it’s really like to live in a mountain paradise — and the one thing that makes it all worthwhile.

1. The cost of living is crazy high.

Housing costs are rocketing, and yet, unlike, say, New York or LA, there aren’t enough high-paying jobs to go around. On top of that, city folks invest in our housing market and drive up prices, making housing so unaffordable that only second-home owners (or third, or fourth) can afford to buy property.

What’s more, in order to cover their costs, these investors set the rent too high for people who are hustling their tails at hospitality and service jobs. Many people who are waiting tables or driving shuttles have MBAs and PhDs, but they still have to work two or three jobs to make ends meet. The average cost for a median home is a whopping $594,200, and the median household income is less than $60,000 a year — it just doesn’t add up.

And if there are kids involved? Tack on another annual $15,600 in expenses for childcare per kid. This doesn’t even include food, clothes, extra curriculars, or doctor visits. And in an active, outdoorsy town like ours, you can bet your ass almost every kid’s been to the ER at least once.

Visitors love to gab about our landscape; gorgeous mountains basically photo-bomb just about every selfie. But do these same people help us preserve our natural world and environment? No. Many come here with the notion that there are endless resources. What’s the harm in chucking a beer can in our river? Flicking a cigarette butt or wrapper on the street?

And the food industry provides the second-highest source of income in our town, but it’s also the most wasteful: more than 40 percent goes to the dump. And while there’s a small eco-business here (Innovative Regeneration Colorado) that’s tried to convince businesses to reduce their carbon footprint, few have made a substantial impact.

Point being, remember your lessons from kindergarten — and this goes for visitors and locals: Don’t take more than your share of anything and for the love of nature, pick up after yourself.

Many people move to a resort town thinking it’s a Neverland of sorts; that if you run fast and far enough away, your troubles won’t follow. Let me burst that bubble for you: not true.

A lot of young and middle-aged transplants are trustafarians – people who rely heavily on their inheritance, so they never really have to develop a skill or career. As a result, many people who live here are emotionally unstable souls with addiction issues and/or a plethora of social problems. Our mental health services are overworked and understaffed; it’s a growing problem many refuse to publicly admit.

I’m likely to get some backlash for this, but since I’m busting myths, might as well kick at the knees, right? People assume that small towns are close-knit communities; the kind of place where folks drop everything to help one another.

But here’s the thing: A community is usually built on a common ideal, with everyone working toward a similar goal. In Steamboat, there is a lot of divisiveness, between socio-economics, part-time vs. full-time residents, the wealthy and the workers, and the young and the old. Plus, the hopes of a new generation of residents often collide with the perspective of homesteaders and ranchers who have lived here for six or seven generations.

Simply put, one has to pick sides in order to find some sense of camaraderie. For instance, low-to-moderate income families won’t be keen to support the construction of new timeshares any more than retired residents want to pay for new schools. No one expects Steamboat to be Mayberry, but it’s especially frustrating when the town can’t even agree on what to do about the lack of affordable housing for the year-round residents that keep this town running.

So yes, living here in Steamboat Springs is not perfect. (And, honestly, is anywhere perfect? No.) But there’s one incredibly special thing about our mountain town that makes it all worthwhile:

As an adult, I’ve visited plenty of shuls where I’ve felt swallowed whole and spit out for not being “good enough” to join. In Los Angeles, we were advised to attend one or two synagogues that were less popular, simply because our names weren’t recognized in certain circles. (We couldn’t afford the dues, anyway.) When we lived in Nashville, there was a gorgeous synagogue that was fairly new. We joined it and loved it, but rumors soon started about why it was created: because the other synagogues in the city were meant for families with a richer history in the south.

But here? No one cares! Rich or poor, observant or lax, all are welcome at Har Mishpacha. Yes, the occasional visitor passes through with judgments about how simple and unorthodox we operate, but most are in awe and only wish their communities were as warm, inviting, and accepting as ours. Yes, congregation can’t change the shortcomings of the town, but we make up for it by creating an open forum to discuss small ways in which we can ease the burden for everyone.

Take our religious school. Most families with kids can’t afford full membership to the congregation, coupled with an additional expense for Hebrew School. So, every year, our board budgets to support the educational programs and child-friendly events so that every family feels included and not shamed through exclusion.

Due to our budget and the ebbs and flows of active members, our rabbi usually only comes once a month. But when he does come to town, many gather together to pray or learn, and we all leave the divisiveness — be it political views or the wealth gap — at the front door.

We’re truly a mixed bag of Jews — Conservative, Reform, Reconstructionist,  Humanistic, and even interfaith. Some of us traded big cities with easy access to Jewish life for a new path, a new place of belonging. And as a group, we’ve created a stable foundation for the future of our community. At our congregation, the haves don’t make the rules for the have-nots; here, we’re all in it together.

And while sometimes kvetching seems like the best way to communicate, we’ve learned kvelling brings us closer. It gives us something to build, work toward, and love as a team. Besides, in our little town, we can’t afford to take each other for granted. We’re the only Jews we’ve got!