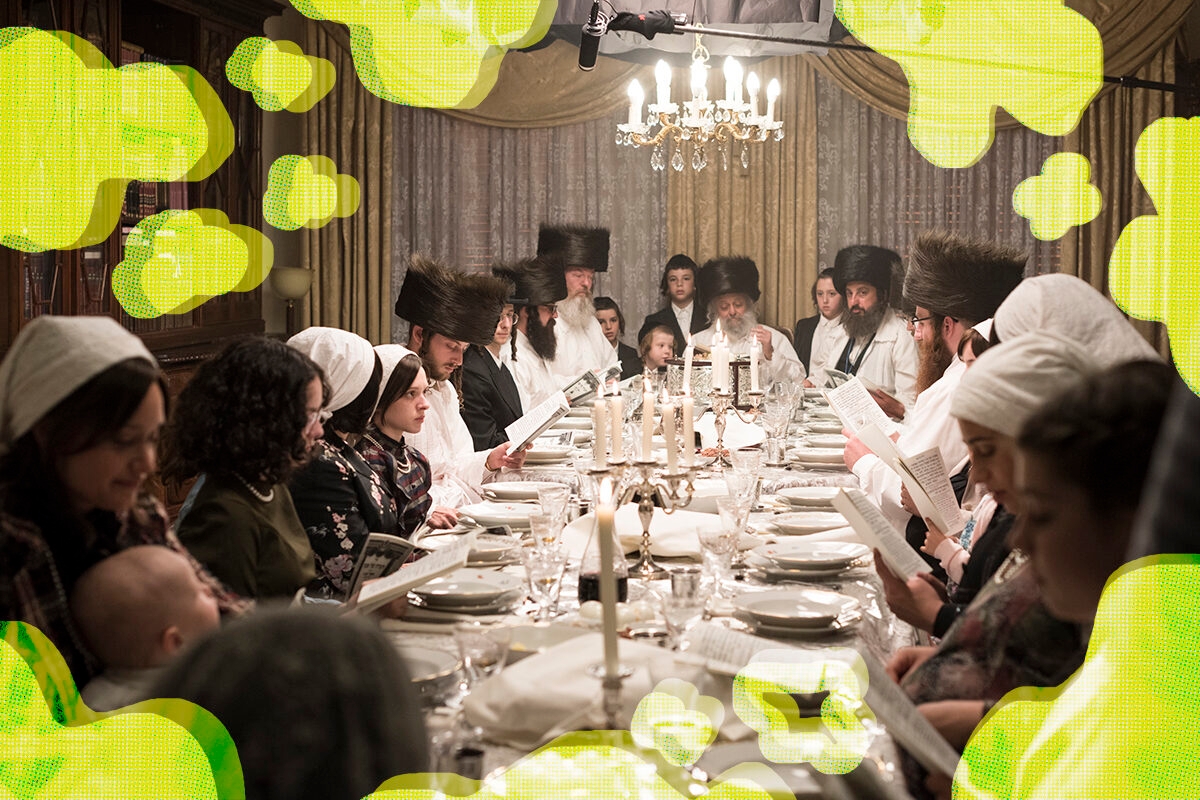 Since Unorthodox came out in late March, the Netflix limited series about a woman who leaves her Hasidic community in Brooklyn for secular life in Berlin has become a phenomenon.

The show is an entrancing feat of storytelling; it is visually stunning and its fiery star, Shira Haas, is magnetic, so the series’ popularity isn’t a complete surprise. Still, I don’t think anyone could have anticipated that such a very Jewish show — one that’s laden with Yiddish dialogue, at that — would resonate so deeply with audiences around the world.

It’s true that Jewish ultra-Orthodoxy, like many other closed-off communities, draws an intense level of voyeurism. Yet, while Unorthodox tells a very specific story of a fictionalized woman’s struggle to fit into a very distinct community —  a struggle most of us will never fully comprehend —  interviews I had in April with the series’ creators — writer/producers Alexa Karolinski and Anna Winger, as well as with Deborah Feldman, who wrote the eponymous autobiography the series is based upon — reveal that the show emotionally resonated with so many who have felt ill at ease in their own communities, whatever and wherever they may be.

For Karolinski and Winger, two secular Jews, making Unorthodox was a profound and illuminating Jewish experience. But that doesn’t mean it was unifying Jewish experience: While the overwhelming response to Unorthodox has been laudatory, there has also been some criticism about how it may negatively reflect upon Jewish orthodoxy.

In a sense, Unorthodox has created some division — or , at least, shed light on existing divisiveness within the Jewish community. That’s especially for Feldman, who was not officially involved in the show, but who has suffered backlash since her memoir was published in 2002.

“We never saw this as an anthropology of the Satmar world,” Winger told me from her home in Berlin, between homeschooling sessions with her kids, ages 10 and 15. “It was more like: These are human beings, and their stories are relatable.”

For Winger, working on Unorthodox was the first time she worked with such an overwhelmingly Jewish cast: “I usually say it take a village to make a show,” said Winger, who has worked on the German smash hit Deutschland 83.

In the case of Unorthodox, however, “it takes a shtetl.”

The experience of working with so many Jews on set made Winger feel more connected to the Jewish community at large. “I think there’s a lot of things that we have in common across the spectrum of Jewish experience,” she said. “I mean, I thought it was really different, but actually, it’s not that different. It’s just at the opposite end of a kind of lived experience spectrum.”

Karolinski echoed that sentiment when we chatted via phone from her home in LA. (Fun fact: Karolisnki gave birth to twins on the day the series wrapped!) “At the end of the day, it was Anna’s and my job to tell a good story,” she said. “But in terms of when it comes to the inner workings of how the different communities work, we relied heavily on help and specialists.”

She’s referring to Eli Rosen, who taught the actors to speak Yiddish in the proper Hungarian dialect. Also helping out were many former Hasids who were part of the cast, like Jeff Wilbusch. (Winger and Karolinski were resolute that the show needed to be in Yiddish. And while Karolinski feared that would be a no-go for a big company like Netflix, she was pleasantly surprised when they agreed.)

“I mean, obviously, there’s a general message, and as soon as you focus on the story of the one who leaves versus the ones who stay, you make a decision to tell that story,” Karolinski said. “And, of course, you focus on this person’s pain instead of maybe other people’s joy. But … we really, we really made an effort to kind of develop other characters, as well, you know, make her husband, Yanky, a real character who you also feel for.”

Feldman, who has known Karolinski and Winger for a while now — Winger and Feldman’s children go to the same school —  gave the two women her blessing to do as they saw fit with her book. Still, even if she wasn’t officially involved in the TV show, she remained emotionally involved, as much of it reflected her experience. “You know, you have all sorts of people saying that it’s not fair, it’s not accurate,” she said. “Like, even the people who are formerly Satmar who say, ‘Oh, no, it’s not accurate. You know, it wasn’t like this in my home…’ It’s just like all these little nitpicking details because within the community, there is so much diversity.”

“If you show one person’s experience, it’s not going to reflect every single person’s experience in that greater bubble of Satmar,” Feldman said . “But based on what I went through in my own life, based on my own memories of that world, I feel that they are very accurately reflected in the series.”

For some Jews, “It’s very uncomfortable to finally have these stories out in the open and part of the conversation about Judaism, because for so long, they’ve lived in a reality where liberal values have defined conversations about Judaism,” Feldman said. “And I think many of them are not comfortable with confronting the reality of what ultra-Orthodoxy really is.”

She continued: “And that’s just unfortunate because it would be so much more helpful if people who are Modern Orthodox or Conservative would simply just maybe do some more outreach, like maybe just try to initiate more dialogue with ultra-Orthodox people or people who leave Orthodoxy.”

“I experienced so much rejection in the Jewish world,” Feldman said, reflecting on her own experience leaving her Satmar community. “And in the end, I had to kind of really leave the Jewish world in order to find freedom.”

“That’s really, really important to me to just to start discussions in the Jewish world about internal prejudices,” she added.

Karolinski isn’t too concerned with the negative feedback from some in the Jewish community — not because she doesn’t value their opinions but that, as an artist, not everything she does will please everyone. “For every message of somebody who’s unhappy, we receive hundreds from people inside the Orthodox community that feel grateful and happy,” she added.

In fact, for Winger, creating Unorthodox was an experience that expanded her view of Judaism: “What was really nice about the set, and about the community of people making the show, was there was so much discussion of all these things,” she said. “I will say that, having spent so much time with people who were raised Satmar, even if they left… they love where they come from, they love their own culture, and the singing and the, you know, just joy around Shabbat… It was really never felt that any of these people had turned away from Judaism so much as they just hadn’t been able to make it fit in that way.”

Ultimately, at the end of the day, Unorthodox is a tale of a woman fitting into her community. And that struggle is universal — no matter where or how one is raised — and is perhaps the greatest strength of the show. “The struggle to fit in…  that’s a universal struggle,” Winger said. “You know, lots of Catholics have told me, ‘This is my story.’ Someone from a tiny village in Bavaria who is like, ‘I moved to the city. I love where I come from, but I was looking for something else,’ you know. So that’s been really great.”

“We’re getting messages from people in India, and Turkey, and Morocco,” she added, pointing to Netfilx’s international reach. “It’s not like anything I’ve ever experienced before. Because you have this sense of we’re all in this together. And it’s overwhelming, like, everyone gets it at the same time, and brings their own experience to watching it.”

“I think at a time when there is obviously been a lot of anti-Semitism, it is really beautiful to see people relating to people that they might never have had anything in common with,” Winger said. “There’s just a lot more that we have in common as people then than we normally acknowledge. So I think that was definitely a goal from the start.”