Netflix's 'Unorthodox' Is Yiddish, Feminist, and Just What We Need Right Now – Kveller
Skip to Content Skip to Footer

Netflix’s ‘Unorthodox’ Is Yiddish, Feminist, and Just What We Need Right Now 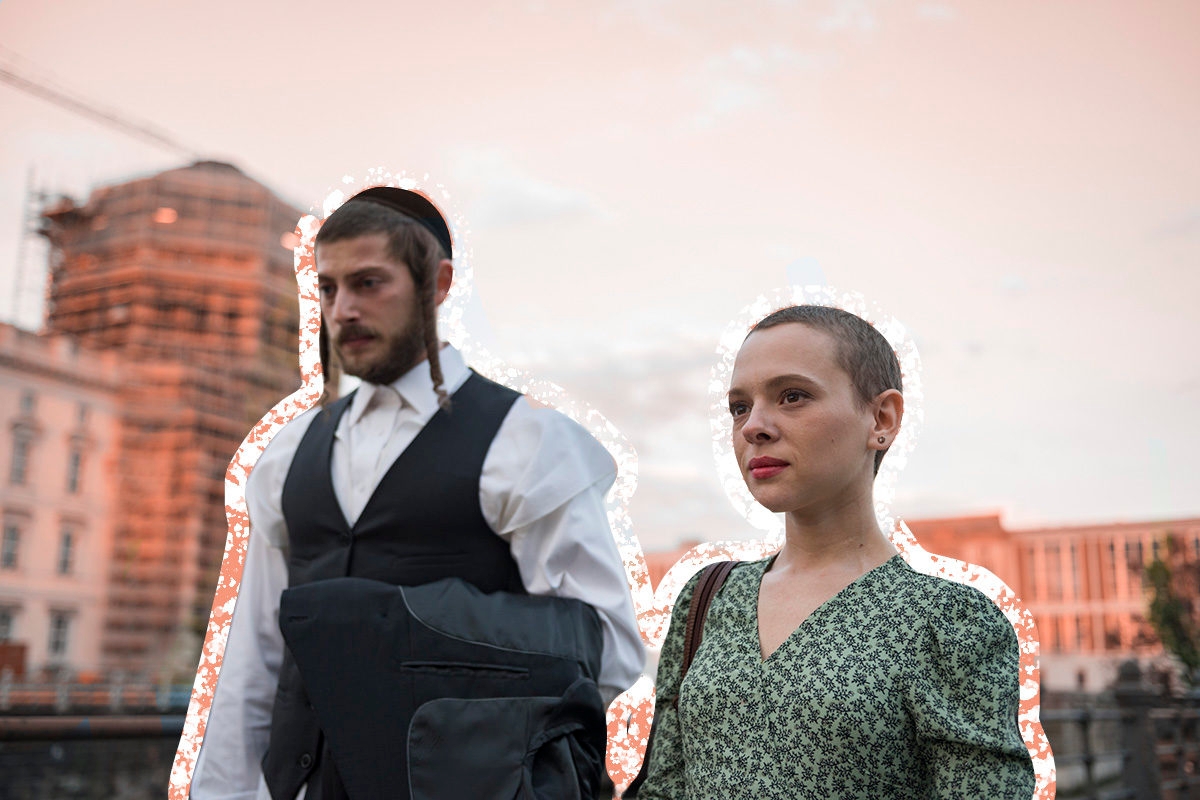 Back in 2012, when Deborah Feldman’s memoir, Unorthodox, first came out, several people recommended I read this tale about a young woman leaving the Hasidic Satmar sect.

I didn’t read the book back then,  but I was wrong not to. Unorthodox — the book —  is an important and engrossing autobiographical work. It’s now inspired an incredible new Netflix series by the same name. Starring Shtisel‘s Shira Haas, it is a reverent and beautiful piece of television that everyone should watch.

In this miniseries — out Thursday, March 26 — Haas plays Esther “Esty” Shapiro, a woman struggling to find her place in that same Brooklyn Satmar community where Feldman grew up. Like Feldman, who wrote in secret, Esty has a secret passion: music. Like Feldman, her father is incapacitated, her mother has left the community, and she is raised in part by her bubbe.

But Esty’s story isn’t a carbon copy of Feldman’s; it’s more of an amalgam of the many high-profile tales of those who left ultra-Orthodoxy, such as Shulem Deen, Jericho Vincent, and Abby Stein, who has a small role in the show.

Haas brings a true powerhouse performance, and Esty’s character is powerful and specific, and yet, it’s a universal tale found in all stories of Hasids who have gone “off the path” — those who feel like a square peg in a round hole in their restrictive and tight-knit communities. In each instance, for every chunk of freedom sought there is a price — ultimately, the dissolution of the relationship with your family and the only community you’ve ever known. That is a heavy and constant price to pay.

In the show, Esty keeps searching for her happiness — in clandestine piano lessons, in a marriage that she hopes will bring her freedom (spoiler: it does not), and then by escaping from Brooklyn to Berlin, the place where her ex-Hasid mother lives. While she finds a new community of musicians there, and a way to follow her love for music, it’s safe to say there is no way to neatly tie this story in a happy-ever-after knot. There is no place in the world that will be a square hole for this square peg. Just a place that feels a little less painful, maybe, a little more right.

That truth is that many find their place and happiness within ultra-Orthodoxy, a place that offers them faith, community, and comforting rituals. But for those who grow to feel out of place, the way out is arduous and incredibly painful and, in some ways, never truly complete. And Unorthodox portrays this journey with emotional eloquence.

If you are worried that this show contains a two-dimensional portrayal of ultra-Orthodoxy, let me assuage your fears. Sure, unlike Shtisel, the Israeli show about Haredi Jews, this is a show that centers on someone that rejects their religious community. But the portrayal of orthodoxy is handled with utmost sensitivity and care.

For a start, the show is partly in Yiddish — a novel choice that feels very respectful and very right. Both Haas and her co-star, Amit Rahav, learned the Jewish tongue spoken by the Satmar community for the show. It was a hard feat for both actors, which entailed hours of lessons from Eli Rosen, the rabbi in the show and himself an ex-Hasid (Rosen and actor Jeff Wilbusch, who is also ex-Satmar, helped make sure every minute detail in the show was accurate, down to the length of the socks.)

It’s truly striking to see a show where Yiddish is front and center. I found myself admiring it for its beauty, musicality, and warmth. One scene that features a song in Yiddish is breathtaking. And the choice of Yiddish helped engross me in the community that the show was portraying — a complex one, like all communities, with villains and heroes and everything in between.

Esty’s husband, Yanky, played by Rahav, is a particularly strong and complex character. His love and devotion — his desperation for her to remain with him —i s heart-wrenching.

Yanky offers to love Esty, quirks and all, and at first, she is thrilled by the concept. On their wedding day, the exhilaration on Esty’s face is intoxicating — you see that she truly believes that in marriage, she will find freedom. But then, as they work to consummate their marriage, that all sours. Esty feels oppressed by her husband’s sexual desire, and her physical inability to return it.

The scenes from their marriage are the most intimate. A journey to the mikveh before their wedding shows Esty dipping in the ritual bath, impatient, giddy with excitement. As a viewer, this scene felt even more shocking than the lovemaking scenes between the two — those entail no nudity but can be stomach-churning because of how uncomfortable Esty is. But both intimacy and sacredness are communicated in the show, and nothing feels salacious.

Yanky is distraught when Esty leaves him without saying a word. And he follows her to Berlin — a complex place for the Satmar community. On the one hand, for Esty, it is a place where her mother sought freedom from her community, and where she comes looking for her own. On the other hand, the Satmar community was started in Europe and reestablished itself in New York in the wake of World War II, on the ashes and the trauma of the Holocaust. The show really drives that point home — in a way that sometimes feels a bit didactic, but still powerful.

Motherhood is an important part of the show, both the void that Esty’s absent mother created as well as Esty’s fear that she will not know how to be a mother because of it. It is never addressed in the show, but undergoing the journey to find her own happiness is not only something that Esty does for herself, but for her future children and their wellbeing. She does not want them to grow up with an unrealized, angry, or absent parent, as she did.

Unorthodox is a beautiful show, and Esty is a magnificent character — her harrowing coming of age tale is universal and I feel like many of us, religious and secular, will see ourselves in her in certain moments.

A show this profoundly human is exactly what we need right now, in days where we all feel so lonely and so detached from our communities — and so scared that things will be this way forever. Unorthodox reminds us that life is a constant search, that happiness is not always the end goal, and that, sometimes, you just have to work through some — pardon my French — real tough shit before you come through on the other side.