The Secret to Midge Maisel's Marvelousness? She DGAF! – Kveller
Skip to Content Skip to Footer

The Secret to Midge Maisel’s Marvelousness? She DGAF! 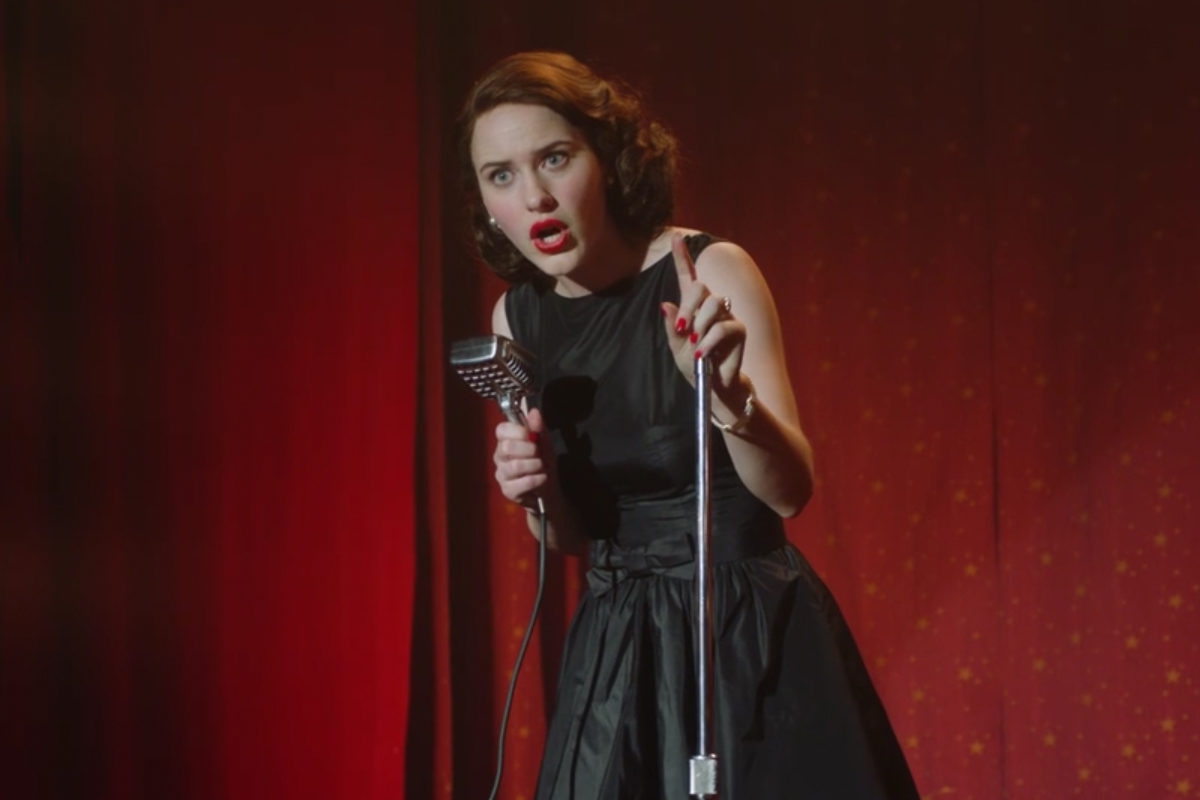 I’ve finished watching both seasons of Amazon Prime’s The Marvelous Mrs. Maisel, and I’m feeling sad. I am going to miss the show’s main character, Midge. She captivated me from the opening scene: standing in the middle of a reception hall, surrounded by the guests who had come to celebrate her wedding, she asked in her sassy, audacious style, “Who gives a toast at her own wedding? I mean who does that?!”

Of course, we know the answer before she offers it. It’s Midge! She gives a toast at her own wedding! She can’t help herself. It’s not enough for all eyes to be on her during the ceremony — she has to remain the center of attention during the reception, too.

But if Midge were a real person, I wouldn’t have been drawn to her the way I am to the TV character. In fact, I probably would have found her annoying — she can spout a clever turn of phrase in any situation, her hair always looks amazing, and she has an endless supply of expertly tailored clothing that complements her perfect figure. On top of all this, she’s incredibly self-centered. In one episode, she forgets her best friend’s baby shower. In most episodes, she leaves the house without feeding her kids. She probably would not make a very good friend.

Then again, the issue is moot because if Midge were, in fact, a real person, our social orbits would not have much intersected.

The Marvelous Mrs. Maisel is set in the late 1950s and early 1960s, when Midge was a young Jewish mother to two small children. She’s separated from her husband, living with her parents on the Upper West Side, and attending synagogue services with them on the holidays. She works at B. Altman’s makeup counter during the day, and at night, tries to make it as a stand-up comic in the gritty clubs of Greenwich Village.

If Midge were real, she’d be in her 80s. She’d probably still be living in New York. I can’t think of any reason she would have relocated to Cleveland, where I live. But if she had, I’m guessing she’d be a docent at the art museum, or maybe leading a spinning class at the JCC.

I’d go looking for her. I don’t think we’d be friends, but I’d love to take her for coffee and ask for some mentoring — because I could definitely use her advice on the creative process. The trouble I’ve had writing this little essay is proof enough. (It’s been a painful task, with several false starts, and lots of writer’s doubt: What do I know about comedy? And what makes me think I can suddenly become a TV critic?) But unlike me, Midge seems to have none of these inner demons. She just gets up in front of her audience and talks. Her words — many profanities among them — come out fast, sharp, and uninhibited.

Offstage, Midge is demeaned by her cheating husband, infantilized by her parents, ordered around by her superiors at B. Altman, and mocked by her fellow (male) comedians. She takes it all in stride, mostly because she has no choice. That’s how her world works.

On stage, however, all social norms are suspended. Midge is free. She uses the spotlight to shine a light on the utter ridiculousness of the behaviors she encounters on a regular basis, and, in this sense, Midge is more social critic than comedian. When her audience laughs, it’s not because her jokes are funny — it’s because laughter provides some relief from the uncomfortable truths Midge exposes.

Critics have speculated that Midge, the character, was inspired by Joan Rivers, Phyllis Diller, or another 1960s female comic. But I’ll venture in a different direction. Perhaps Midge is a creative answer to the question: What if Lenny Bruce had been a woman?

Bruce is the only character in The Marvelous Mrs. Maisel who was actually a real person. Born Leonard Alfred Schneider, he did comedy in the late 1950s, until his untimely death from a heroin overdose in 1966. Played by Luke Kirby, he does not have a central role in the show. Yet he hovers throughout, showing up at unexpected moments. He bails Midge out of jail when she is arrested for obscenity. In another scene, they share a joint. And one evening, he appears at the same club as Midge and introduces her to the stage.

Like the fictional Midge, the real-life Lenny Bruce was dashing, well-dressed, and unabashedly Jewish. Also like her, he grew up in New York, played clubs in the Village, and he would have been exactly her age. He was known as a “sick comic” because he used a vast repertoire of obscenities on stage (which got him arrested on many occasions). Perhaps most striking was his unfiltered social commentary, which he used to expose racism, anti-Semitism, corrupt politicians, the Catholic church, and the establishment in general.

Still, there was one sort of injustice that Bruce — a playboy who cheated on his wife — did not call out; the kind that is inescapably obvious when you see the world through Mrs. Maisel’s eyes. She names it in one set, when she turns didactic. Comedy, she explains, if fueled “by the lack of power, by sadness and disappointment, by abandonment and humiliation.” And who does that description fit best, Midge asks, but women?

Yes, it’s a heavy-handed message. That may be why I love Midge: She gets up on stage, exposes the holes in her heart, and speaks the truth. If only I could show her my work, and get her advice. Maybe she’d loosen me up. Perhaps she’d convince me to aim an obscenity in the direction of anyone who might criticize my writing, or dismiss it as unimportant.