The ‘Send Her Back’ Chant Is Chillingly Reminiscent of Nazi Germany 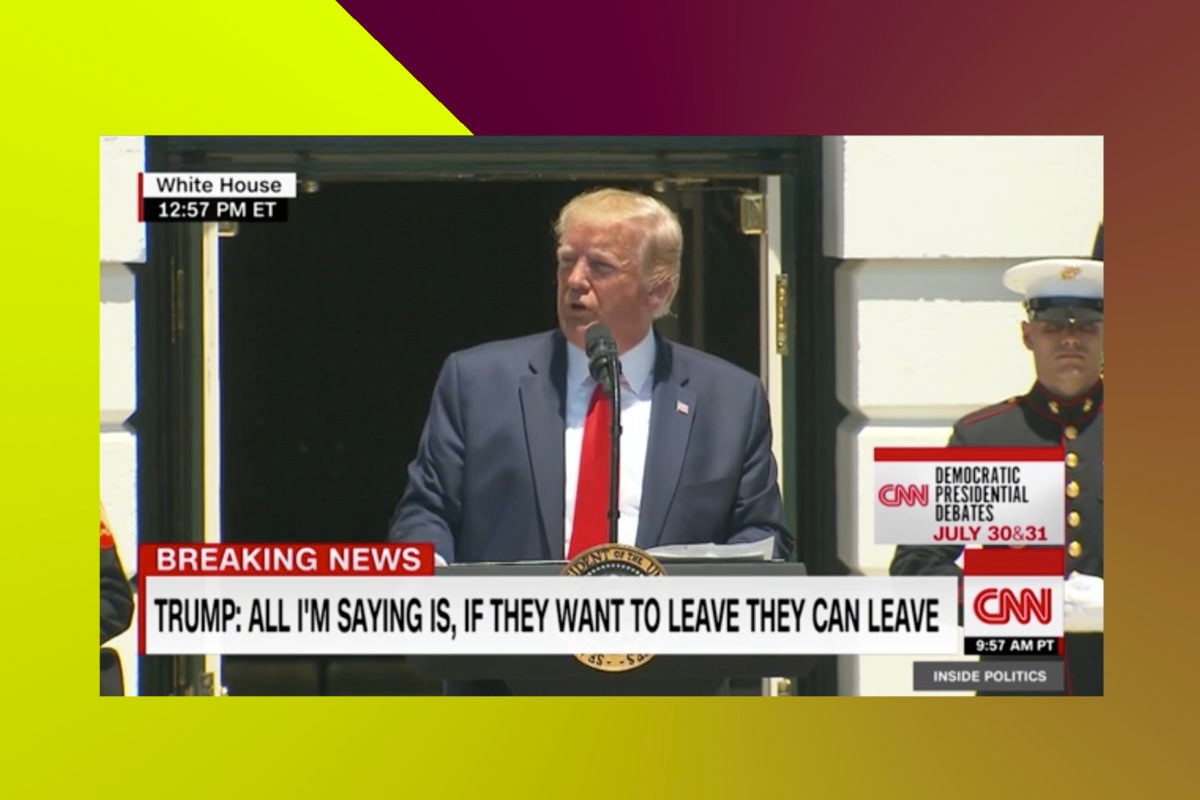 Maybe you’ve become inured to jaw-droppingly offensive tweets from our president. Maybe we’ve all become accustomed to abhorrent chants from supporters at his rallies. But whether you’ve been an American for three weeks (like me) or for generations, as Jews, and as Americans, we should take Trump’s recent tweets suggesting that four congresswomen of color should “go back where they came from” very, very seriously.

This week, the president tweeted that four elected representatives — three of which were born in these United States of America, while the fourth is a naturalized citizen — need to “go back the places they came from,” calling those places “crime infested countries.” Those congresswomen — yes, all women — were Rashida Tlaib (born in Detroit), Ayanna Pressley (born in Chicago), Alexandria Ocasio-Cortez (born in the Bronx), and Ilhan Omar (born in Somalia).

Perhaps the extremity of Trump’s statement is not a surprise, given, you know, the man spent many years arguing that his predecessor, Barack Obama, wasn’t American, either. (Not to mention Trump’s myriad other disturbing statements.) But this newly employed trope — go back where you came from! —  is particularly horrific, and that’s not just coming from yours truly: The majority of Americans agree that his statements are  un-American. The House condemned his statements as racist with a somewhat historic resolution, and even the government’s Equal Employment Opportunity Coalition guidelines clearly state that what the president said is harassment based on national origin — and a fireable offense.

And while some Trump supporters were eager say the media mischaracterized Trump’s very public tweets, and some even argued that what he meant was they should go back to their own states — not countries — in order to fix the problems there, what happened at a Trump campaign rally in North Carolina on Wednesday night made it abundantly clear: Trump’s statements were both racist and intentional, and, clearly, many Trump supporters are down with that.

At the rally, as Trump took aim at Omar during his speech, the crowd began chanting, chillingly: “Send her back! Send her back!”

Now, you may not like Omar, and you may not be a fan of her politics — but that is beside the point. Anyone willing to accept this statement directed towards a Muslim American, one who came to this country as a refugee from Somalia, needs to do some serious chesbon hanefesh — accounting of the soul. Just imagine if a Jewish American, who came to this country after surviving the Holocaust, was told by our president to “go back.”

Actually, we don’t have to imagine America telling Jews to go back to where they came from: It would behoove us all to recall when, in 1939, this country turned away 900 Jewish refugees from Europe on the S.S. Saint Louis, sending many of them to their slaughter.

And we should also remember that Germany’s Nuremberg Laws, enacted in 1935, stripped Jews of their German citizenship and directly led to the Holocaust. In fact, the chants of “send her back!” are so reminiscent of “Juden Raus!” (“Jews out!”), a rallying cry that was such a part of Nazi Germany’s DNA that board game of the same name came out in 1936. The aim of the game was to send Jews back to Palestine.

Such sentiments and language didn’t end with World War II. It’s an idea that’s popular among white supremacists and neo-Nazis today, who often tell Jews (on Twitter and IRL) to “go back to Israel” — even if they’ve never even visited the country.

Truly, “go back to where you came from” is as racist as a statement can get. So, too, is its variant, “where are you really from?” as well as the slightly more subtle, “what’s your ethnic background?” That last example is exactly what Trump adviser Kellyanne Conway asked a Jewish reporter this week, after he asked for clarification about the president’s tweets.

The assumption behind these remarks, these questions, is that if you are a person of color, or a person of a faith other than Christianity, you are not really an American. And what makes Trump’s new favorite trope truly terrifying is it’s increasingly obvious subtext: It’s not simply that if we don’t like it here in the U.S., we should leave. It’s that so many of his supporters genuinely wish that we would.

My name is Elsa Blumenstein. In 1939, the US sent me back. I was murdered in Auschwitz. pic.twitter.com/jTtv5COzD0