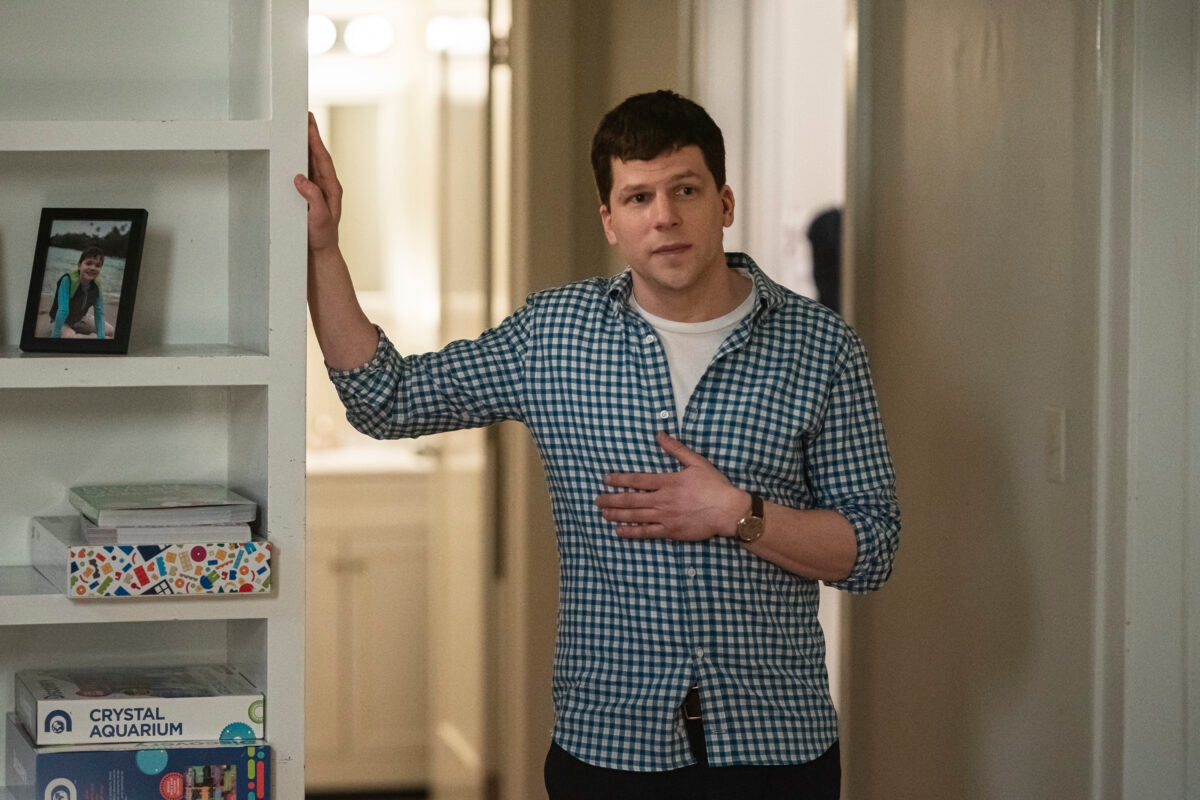 The trailer for “Fleishman Is In Trouble” is finally here, and it is looking oh-so-good!

For those of you who do not know, the much-anticipated show is based on the very Jewish debut novel of acclaimed journalist Taffy Brodesser-Akner, which follows Toby Fleishman, a divorced Jewish dad and doctor in his early 40s, as he tries to deal with his ex-wife Rachel’s sudden disappearance. Jessie Eisenberg will star in the FX series as Toby, with Claire Danes playing Rachel.

Like the novel, the show is narrated by Libby, played by the incredible Lizzy Kaplan, one of Toby’s best friends and a “retired” men’s magazines journalist who is now raising her kids in the suburbs. Libby met Toby during a college exchange semester in Jerusalem, along with their other best friend Seth, played by Adam Brody, who is a party-loving finance bro.

“Toby Fleishman awoke one morning in the city he had lived in his whole adult life,” Libby narrates in the opening of the trailer, as Toby’s mostly empty Upper East Side bachelor pad unfold before us. “Toby was forced to ask the question that occurred to him every minute since his separation — ‘How did I get here?'”

“This is a story about everything,” Libby explains in the trailer. “It’s about life, and marriage, and how young love can become old resentment, and money, and dissatisfaction, and jealousy, ambition, career, parenting, nostalgia and lifelong friendship.”

“Fleishman Is In Trouble” is about everything indeed. It’s about the specificities of Jewish life in the Upper East Side. About the constant chasing of money and success. About womanhood and motherhood and all their trappings.

The trailer is super rich with so many Upper East Side and New York City moments. We see the group of friends at a diner and picnicking in Central Park. We also get flashbacks to Rachel and Toby’s early days of courting in that park — ice skating, kissing and being utterly romantic.

We see Toby tell Rachel he decided to be a doctor — the pinnacle of Jewish mother aspirations — not to make money but to make a meaningful life for himself. It’s a decision that would usually align with both but not, unfortunately, in the upper echelons of the Upper East Side. There, Rachel, a successful talent agent, is the one chasing fancy dinners and rich friends and talented clients, money and clout. “I don’t even have time to get a divorce,” Rachel yells at her then-husband in the trailer. Toby? He’s unconcerned with all that. He plays basketball, not tennis and golf like the rest of the rich dads.

We see Toby’s daughter rolling her eyes at him. We see New York supermarkets and Toby diving into a pool, a shot of the George Washington bridge. We see Libby telling her husband (played by Josh Radnor) that she “feels like I am not alive” after becoming a suburban mom, only for him to reply that she chose that life. We see Seth saying, “The world is your oyster,” to post-divorce Toby. We see Rachel wearing a yoga tank and yelling into the ether. We also see her on her operation table for her c-section, vulnerable and scared.

And probably, when the show comes out, we’ll see in many of these scenes echoes of ourselves and our lives as Jewish parents.

The first two episodes of “Fleishman Is In Trouble” come out on Hulu and FX on November 17, with the rest of the show’s eight episodes airing weekly after that. I can’t wait to have this show make me reexamine all my life choices.