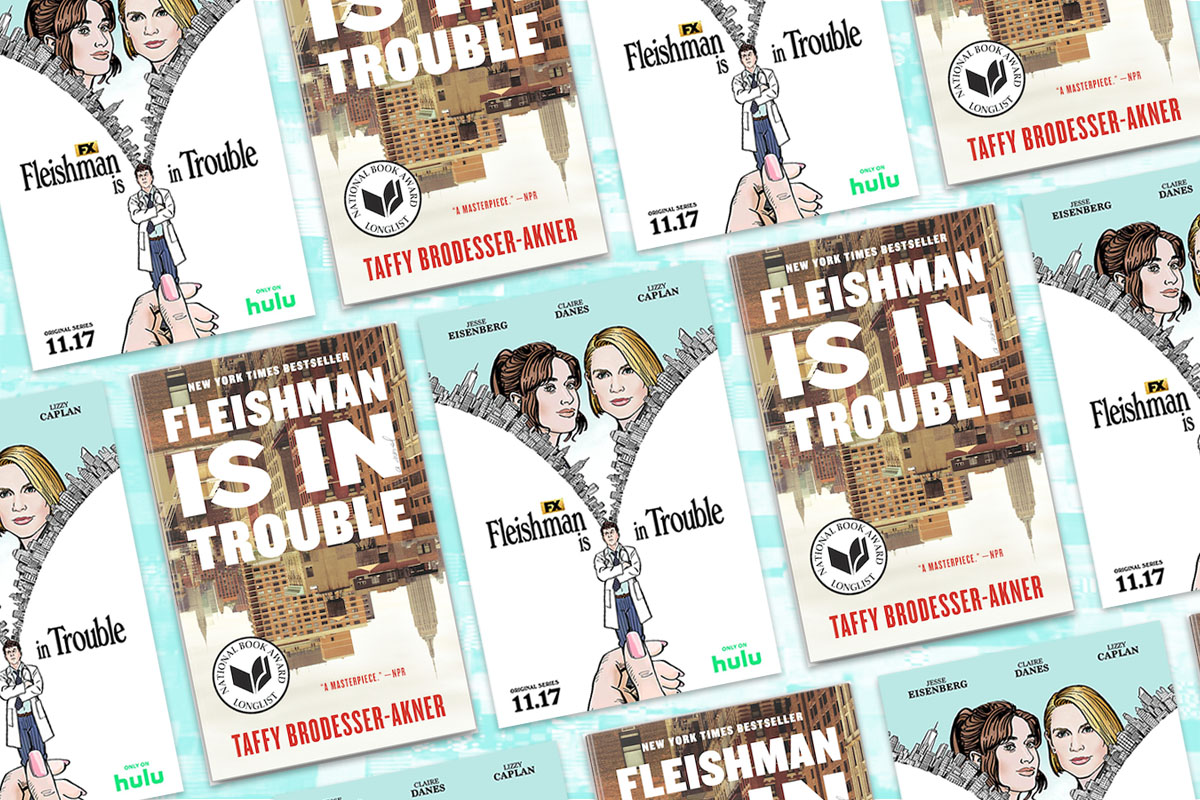 It’s almost here! The very Jewish and very anticipated “Fleishman Is in Trouble” TV show is about to premiere on FX and Hulu in November. The show is based on the excellent 2019 novel by Taffy Brodesser-Akner, who is also serving as showrunner and writer.

We’re huge fans of this book and we think this is perfect timing for the TV debut of Toby Fleishman — as the age of “wife guys” draws to a close, what we need is a show about a flawed, divorced Jewish man.

So here’s everything you need to about “Fleishman Is in Trouble,” probably one of our most anticipated Jewish shows of the year.

When is it coming?

The season will be premiering on Hulu on November 17. Woo hoo! Mark your calendars!

How many episodes will there be?

Eight. The first two episodes of “Fleishman Is in Trouble” will premiere on November 17, and then the platform will release a new episode each Thursday, with the finale airing on December 29.

Who will be playing who?

Toby Fleishman will be played by Jesse Eisenberg. It’s honestly hard to imagine Eisenberg, the perennially child-faced actor, playing a man in his 40s, but the Jewish father of two is 38. Eisenberg’s also played a ton of Jewish roles — from Mark Zuckerberg, to Jewish French resistance fighter Marcel Marceau.

Adam Brody will play Seth, Toby’s best friend, not to be confused with Seth Cohen, his character from “The O.C.” who helped introduce Chrismukkah into pop culture. In the book, Seth, Toby and Libby all met during an exchange semester in Israel, and became lifelong friends.

Josh Radnor will play Adam, Libby’s husband.Radnor is best known as the star of “How I Met Your Mother,” but he also plays a badass Nazi fighter in “Hunters.”

I'm so excited. Been googling "Judaism" and "how to play a Jew" and I think I can pull this off. https://t.co/a0ti6r7gWn

Michael Gaston will play Dr. Bartuck, Toby’s boss. He’s known for his roles in “Prison Break,” “Jericho,” and “The Mentalist.”

Toby and Rachel’s kids, Solly and Hanna, will be played by Maxim Jasper Swinton (“Halston”) and Meara Mahonery Gross, respectively.

Juani Feliz (“Harlem,” “DMZ”) will play Alejandra Lopez, a playwright and one of Rachel’s clients.

Where was the show shot?

NEW YORK CITY BAYBEE! Yes, the show was shot on location in the city, including the Upper East Side, where Toby lives. Locations include the 92nd Street Y, where Toby’s kids go to camp, Central Park, where some key scenes in the book happen, and Toby’s NYC bachelor pad, which looks very convincing (complete with a mezuzah on the doorframe), to name a few.

Wait, can we get a recap of the book again?

Sure thing! The book tells the story of Toby Fleishman, a freshly divorced hepatologist in his 40s and father of two. Toby is vying for a promotion at his job, and enjoying/stressing about his newly single status, which includes online dating conquests and a lot of resentment towards his ex-wife, Rachel. When Rachel disappears, Toby is left fending for the kids by himself. But to figure out where Rachel went, he needs to figure out what truly went wrong with their marriage.

I am so proud (and so terrified) to announce that you will be able to watch FX's FLEISHMAN IS IN TROUBLE on Nov. 17 on Hulu. Here's our poster! pic.twitter.com/5f1qwVFh9N

Can we get some sneak peeks?

Um, yeaaah! Showrunner Taffy Brodesser-Akner has shared some really great glimpses into the show and its scenes on social media! Here’s a dump below:

Welcome to @JoshRadnor, who has landed and made the Fleishman cast complete! pic.twitter.com/9ENUfgZ08v

Ahot of the day is the introduction of Ms. Joy Suprano as Cyndi Leffer pic.twitter.com/iq0rBbYwfD

And this is Claire Danes on set literally three minutes ago. pic.twitter.com/9Dm4m15GrT

Shot of the day. pic.twitter.com/0yGQX05wz5

Today’s shot of the day is two shots, since I didn’t post yesterday. pic.twitter.com/Z2DSzagDD5

“Fleishman” is also featured in this FX teaser, which shows Toby and Rachel ice-skating, Toby kvetching that he’s “a prisoner of the Upper East Side,” Libby lamenting that she can “not believe that this is where life has deposited” Toby, and both Rachel and Toby in the popular “despondently falling backward on a bed” scene (do you fall back on your bed when you’re feeling despondent? asking for a friend).

What are some shows I can watch in the meantime?

Hulu is chockfull of Jewish and Jew-y shows that you can watch while you wait for “Fleishman”! Not exactly the same gist, but the FX thriller show “The Patient” is the latest super Jewish TV show (seriously, the Jewish details in this show are something else). Also on Hulu, there’s “Reboot” featuring Rachel Bloom and Paul Reiser as a Jewish daughter-father TV writing duo.