The U.S. Women's Soccer Team Is More Than Just a Sports Team – Kveller
Skip to Content Skip to Footer

The U.S. Women’s Soccer Team Is More Than Just a Sports Team 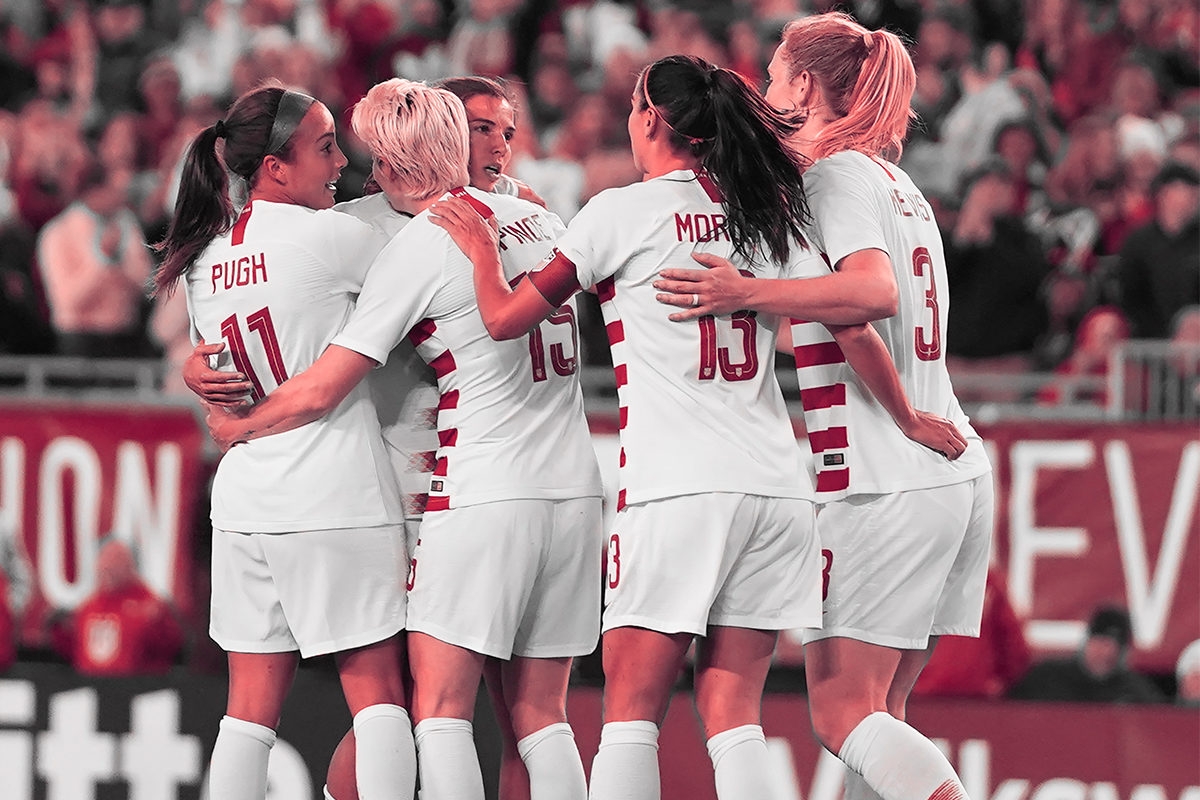 I grew up playing soccer in AYSO — American Youth Soccer Organization — in my very Jewish New York City suburb, and then at my not-explicitly-Jewish-but-everyone-was-Jewish sleepaway camp in the Berkshires. I was never terrible, but I was never great. Well, maybe I was terrible. My dad used to tell me if I gave as much energy to reading as I did to playing soccer, I could be a great soccer player. (Spoiler: I never did.) Yet I played from kindergarten through eighth grade.

My mediocrity notwithstanding, I have always loved the U.S. Women’s National Soccer Team (USWNT). Mia Hamm, the forward, was my favorite growing up. She played for the team from 1987 through the 2004 Olympics, and she’s the first woman to be in the World Football Hall of Fame. She’s amazing.

In case you’re doubting me, check out this Gatorade ad she starred in with Michael Jordan (!), set to the tune of “Anything You Can Do,” proving how she became one of the most recognizable female athletes in America.

Hamm was the face of women’s soccer. I idolized her. And I have proof.

First, my 2003 “player card.” I was on Team Rigatoni, obviously, and I played midfield. My favorite pro player? Mia Hamm. Favorite team? U.S. Women’s Soccer. Did I know about other teams? Probably (definitely) not. Did I love Mia Hamm? One thousand percent. 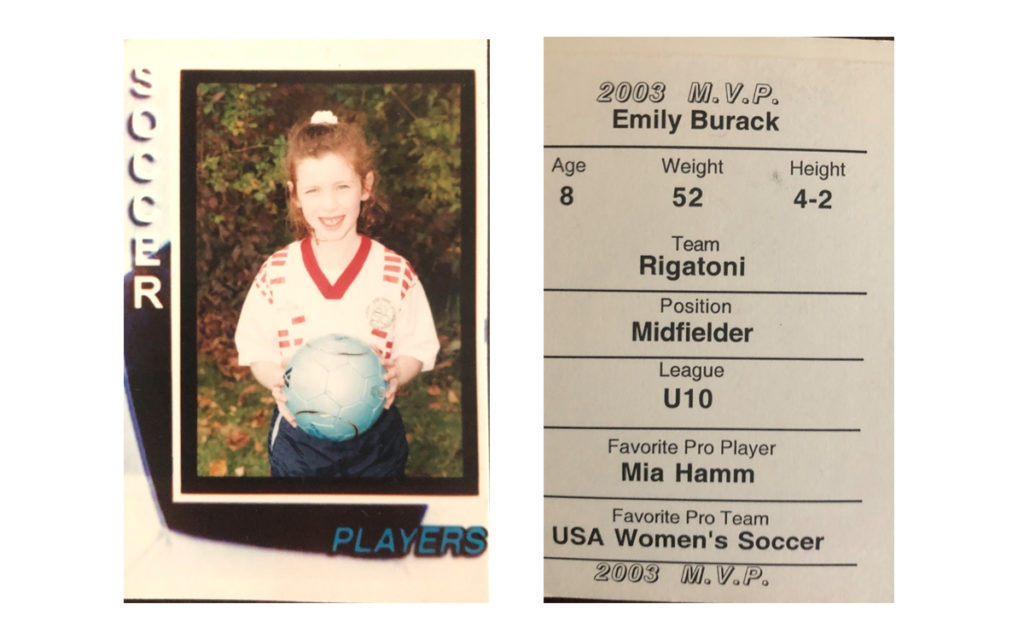 May I also present my fourth grade yearbook, where we were asked to fill out our favorite things. Sports obviously were the “Woman’s US Soccer Team” and Mia Hamm. 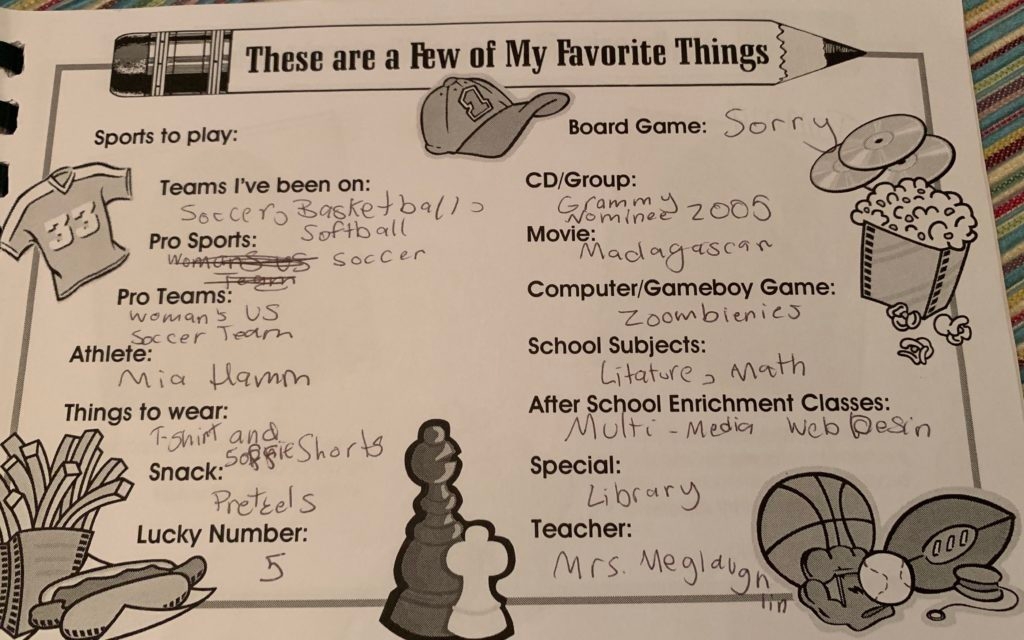 (I’d just like to note my favorite special was Library. As my dad said, I cared more about reading than sports. Perhaps that’s why I am a writer now, and not on my way to France.)

A diary I filled out at some point in elementary school asked about my perfect birthday. Not only was I very specific about asking for the type of cake I wanted — but my dream “famous person” to attend my birthday? That’s right: Mia Hamm. 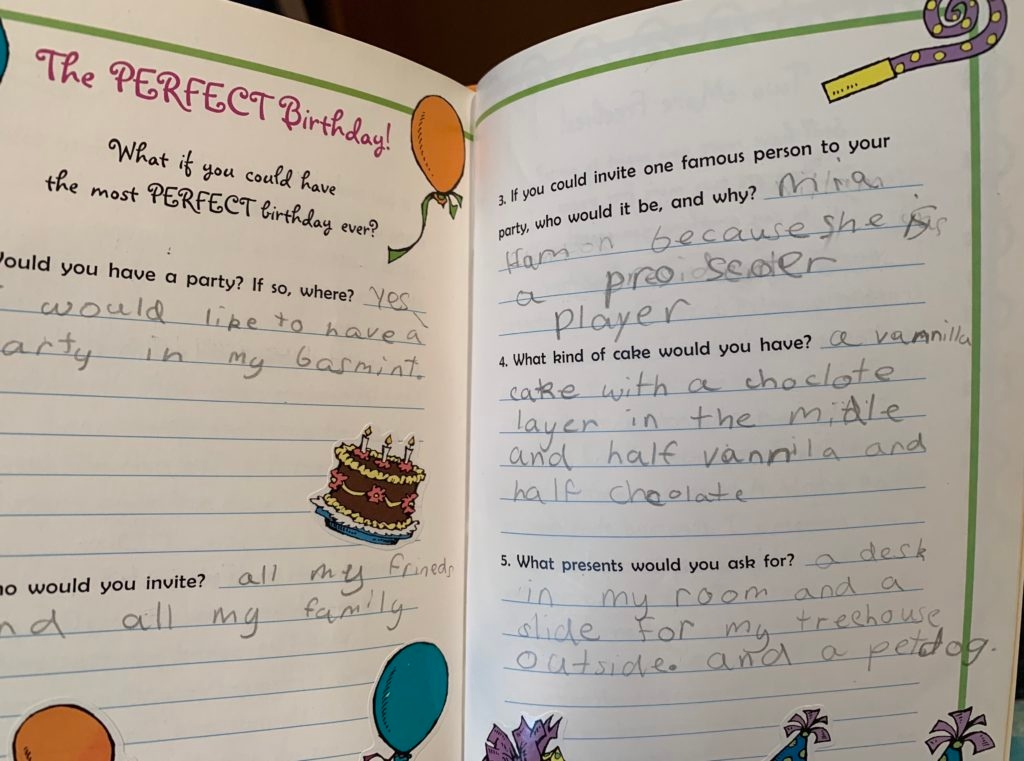 I was — I am — remarkably consistent.

I’m lucky that I grew up at a time when the U.S. Women’s Soccer Team even existed. The team formed in 1983, but didn’t play its first game until 1985, and the first World Cup wasn’t held until 1991. Women’s soccer wasn’t included in the Olympics until 1996. As frustrating as this lag is, the truth is, I got to grow up watching women play soccer.

In a survey on soccer participation in the United States from June 2018, the Sports and Fitness Industry Association found that there are 11 million soccer participants in the U.S., and 42.3% of all female soccer players in the U.S. are between the ages of 6 and 12. That’s a lot of little girls playing soccer. (Raise your hand if you played soccer as a kid! Raise your other hand if your daughter plays soccer!) While basketball remains the most common team sport for children, soccer comes in a close second for kids ages 6 to 17.

And yet, youth soccer participation, is declining in America. This is perhaps due to the pay-to-play nature of the sport. “My family would not have been able to afford to put me in soccer if I was a young kid today,” Hope Solo, the former USWNT goalkeeper said last year. “That obviously alienates so many communities, including Hispanic communities, the black communities, the rural communities and underrepresented communities. Soccer, right now, has become a rich, white-kid sport.”

To be blunt: Soccer in the U.S. has a lot of problems, from the recreational youth leagues all the way though the national teams.

Yet, the women’s national team is trying to fight for change. Women soccer players are at the forefront of a fight for equal pay in the sports world. In March, the team sued U.S. Soccer — the sport’s governing board — for institutionalized gender discrimination.

“This isn’t what champion athletes normally do — launch a public fight with their boss at the most critical stage of their athletic preparation, when their focus is on shutting out distractions, rather than actively creating them,” writes Liz Clarke in the Washington Post.

In the U.S., the women’s soccer outperforms men constantly. They’ve won three World Cups and four Olympic gold medals — the men have won zero. They didn’t even qualify for last year’s World Cup in Russia. The men get paid $75 a day; the women $60. As forward Carli Lloyd wrote, “If I were a male soccer player who won a World Cup for the United States, my bonus would be $390,000. Because I am a female soccer player, the bonus I got for our World Cup victory [in 2015] was $75,000.”

All this is to say: the women’s team, in the U.S., is clearly superior to the men’s team, yet their pay — and institutional support from U.S. Soccer — doesn’t reflect that.

Earlier this year, at an invitational tournament, USWNT players wore jerseys emblazoned with inspirational women. Defender Crystal Dunn chose to wear Serena Williams on her jersey, and in possibly the coolest move ever, defender Becky Sauerbrunn chose to wear Ruth Bader Ginsburg’s name. USWNT actually sent RBG the jersey, and she responded that she’s honored to be among the women chosen for recognition and plans on wearing the jersey for her biweekly workouts (!!!).

The USWNT deserves our support this summer. These are players who are not only dominating at their sport; they are fighting to be seen, respected, and paid equally. For women in sports, for soccer-loving little girls everywhere, and for the 8-year-old Jewish kid inside of the feminist, adult me who still adores Mia Hamm: Let’s cheer them on.