The Ultimate Guide to Mah Jongg 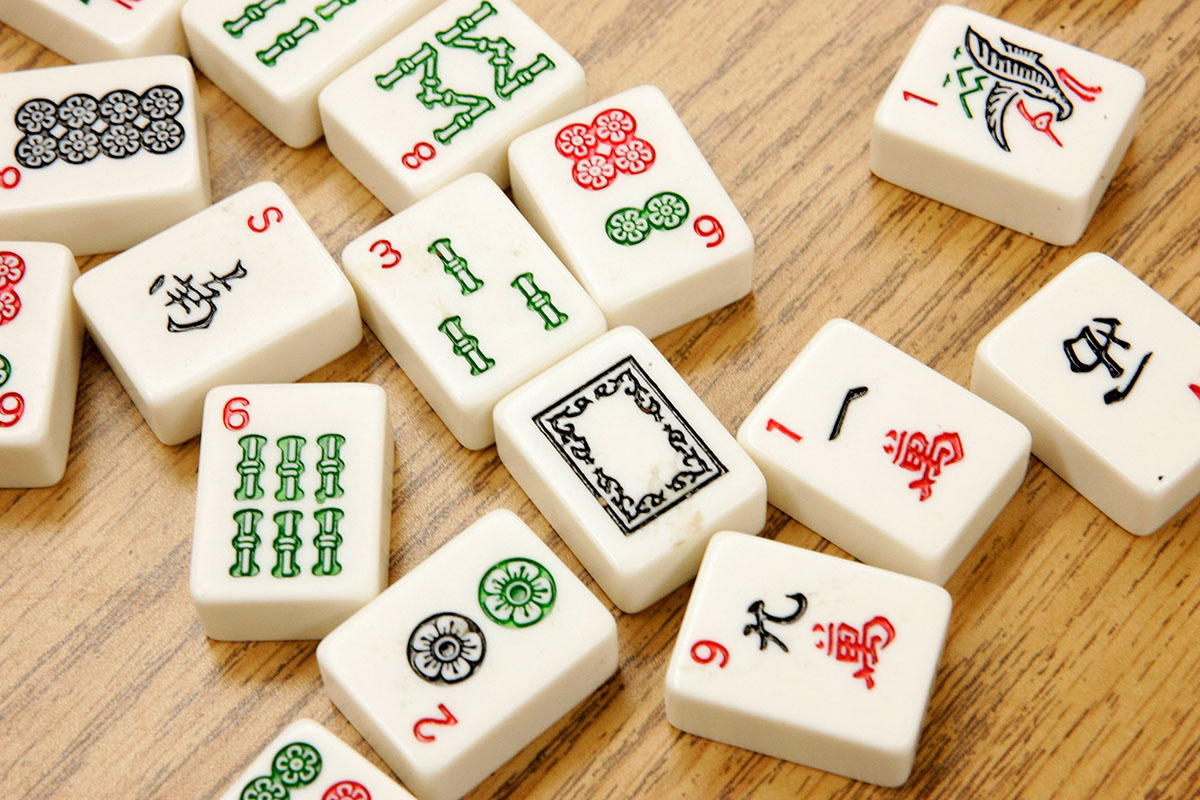 I never thought I’d understand how to play mah jongg.

I grew up watching my mom play the American style of the game. I’d hide in my room, planning my opportunity to steal some snacks, and listen the echoes of “one bam,” “three crack,” and “nine dot” carry up the stairs.

Over the years, my mom, along with so many of my relatives, tried to teach me. They’d lay out the racks and tiles, but I’d take one look at the American mah jongg card and think, “Oh, hell no.”

As someone with ADHD, focusing, seeing patterns, and linking concepts in my brain is difficult. I assumed I’d never understand the game — there were so many rules, the card was overwhelming, and, frankly, I didn’t think I had the brainpower.

Even if you don’t have ADHD, I understand how mah jongg can seem intimidating, especially if you have no prior knowledge of it, or its history outside of pop culture.

Luckily, when I found myself back home during Covid, I realized I had nothing but time to learn how to play — ADHD be damned. Of course, the first time I sat down in front of the tiles, I issued a disclaimer to my mom, saying, “I’m warning you now: I’ll have a lot of questions and I probably won’t get it.”

She was right, of course. Less than an hour later, I had found my new hobby. And when I say hobby, I mean passion. Obsession. My one true love.

And now, we’re here to help you, too. My mom and I had the opportunity to host a Mah Jongg 101 class here on Kveller (which you can watch in full here). But, of course, it’s nearly impossible to learn everything about the game over Zoom.

That’s why I compiled this guide of everything you need to know about mah jongg, from its roots, to how it’s played, to where you can play online. Let’s get started!

The History of Mah Jongg

Mah jongg has always been a way to find community.

Developed in the 1800s around the Yangtze River Delta in China, mah jongg was mostly,  but not exclusively, a male gambling game. However, it quickly spread to larger cities in China and became a way for Chinese people to socialize and bridge generational gaps.

In the early 1920s, marketers, tourists, and businessmen helped popularize it with American ex-pats living in China. They soon marketed it abroad, and it spread like wildfire among metropolitan American women. (Even problematically so.)

Notably, even in America, it was still deeply rooted in the culture of immigrant Chinese families in the early 1900s. It gave Chinese Americans a cultural bond at a time when racism was rampant, and many other Americans saw them as “perpetual foreigners.” Even to this day, mah jongg remains a cherished tradition for many Chinese Americans.

Over time, the game, and the tile set itself, have been changed to fit into different cultures and regions. Today, mah jongg doesn’t have just one “correct” form. The game has evolved into different variations played in different communities — especially among Jewish communities.

Mah Jongg and the Jews

In the decades during and after World War II, mah jongg became an important community builder among American Jewish women.

As families moved away from cities, they encountered feelings of isolation in the suburbs. Young Jewish mothers turned to mah jongg as a way of building new social networks.

In the 1930s, however, a group of Jewish women decided to codify what “American mah jongg” really was. In short, these women wanted to ensure that they were all playing the same game, with the same rules and winning hands.

The group developed a card that detailed the winning hands. As they traveled, they took the card with them, and they shared it with other (mostly Jewish) women across the country, most notably in the Catskills and  Miami. The card soon went “viral” among Jewish women, inspiring the original group to meet in New York City and form the National Mah Jongg League in 1937, and the official card was born.

Now, every August, a group of women come together with their thoughts on what the new card — which details the winning hands — should be. With over 500 years of combined mah jongg experience, they “play out variations and tweak the winning hands until November when they finalize the card for the coming year.”

Mahjong isn’t American. But the Americanized version is what both my mom and I — and generations of Jewish women — have come to learn. That’s why this guide will include both the traditional Chinese game and its American version. Here’s everything you need to start playing:

For the American version, you’ll need the National Mah Jongg League (NMJL) card — here’s where to get it.

From the National Mah Jongg League

Where to buy sets

There are many places to buy mah jongg sets, and even more styles to choose from.

Before you buy, however, I urge you to purchase sets that respect and honor the game’s traditional Chinese characters. Many modern attempts to “refresh” the tiles contribute to whitewashing and appropriation, when the goal should be appreciation of the game and its roots.

You should choose your set based on a few things: the version of mah jongg you wish to play, whether or not you can read the Chinese characters without Western numbers, and what looks and feels nice to you.

Also, remember that traditional Chinese mahjong sets have 144 tiles, while the American versions have 166, as they will feature more tiles in the form of flowers or jokers. American versions typically come with four or five racks, dice, chips, and wind indicators, as well.

You can get sets on Amazon, of course. And some, like these, come with storage/carrying bags.

This set from Pearl River, the first Chinese American department store in the world, is available in a “Western” option, which comes with numbered tiles, and an “Asian” option, which features Chinese symbols.

Yellow Mountain Imports has some beautiful and unique sets to choose from.

Many vintage sets can be found on eBay, and Etsy also has a great selection of both vintage and new sets.

Speaking of Etsy, I love this set, which you can get customized from Hong Kong-based illustrator Karen Aruba and her father, who carves each tile by hand.

How to play mah jongg

Don’t like videos? That’s ok! Here’s a how-to with pictures and diagrams.

And now, the American version

You’ll want to start by learning how the game is set up, how to read the card, and how to pass tiles (also known as the “Charleston”). This video does a great job breaking it down.

Need more help understanding the Charleston? Here’s another video that’s helpful, as it includes mnemonic devices to help you remember the passing order.

More of a visual learner? I got you! Here are some resources with visuals to learn both the Charleston, and gameplay.

How to Play American Mahjong, from Yellow Mountain Imports

Once you understand the card and the Charleston, you’re ready to get into gameplay! Here’s a video that clearly and easily explains how American mah jongg is played.

Got gameplay down? Nice! The next step is to start thinking about strategies.

Here are 5 Mahjong Strategies for Beginners, from Bar Games 101.

This guide from Sloperama has strategies for beginners, as well as strategies for the different styles of mah jongg, including American. It also has an index that makes for easy navigation.

Ready to play for real?

There are several places you can play online, either with real people or computers. For example, on Real Mah Jongg, you can coordinate with friends to play at the same time together, or you can play with strangers and/or computers. It does require a subscription of $5.99 a month. (In the workshop my mom and I led, you can watch us play a game on the site above.)

Mahjongg Time lets you play several styles of the game, including Chinese, American, Riichi, Hong Kong, and Taiwanese for free.

Also, there’s another game being released in June, with both other players and the computer. It can also be played on your phone. We’ll be keeping our eyes out for it!

If you want to play in person, there are so many leagues out there to join, regardless of if you know any actual players. Modern Mah Jongg has a whole list of leagues across the country you can check out! They also have a wonderful Facebook community to join.

And, as a reminder, my mom and I are rooting for you! We promise you’ll be able to pick it up in no time. You can watch us lead our Mah Jongg 101 workshop below.

Last but not least, you can win a pair of mah jongg dice!

In partnership with the lovely folks at Modern Mahjong, we are giving away a free pair of mah jongg dice. Follow this link for more information and to enter the giveaway.