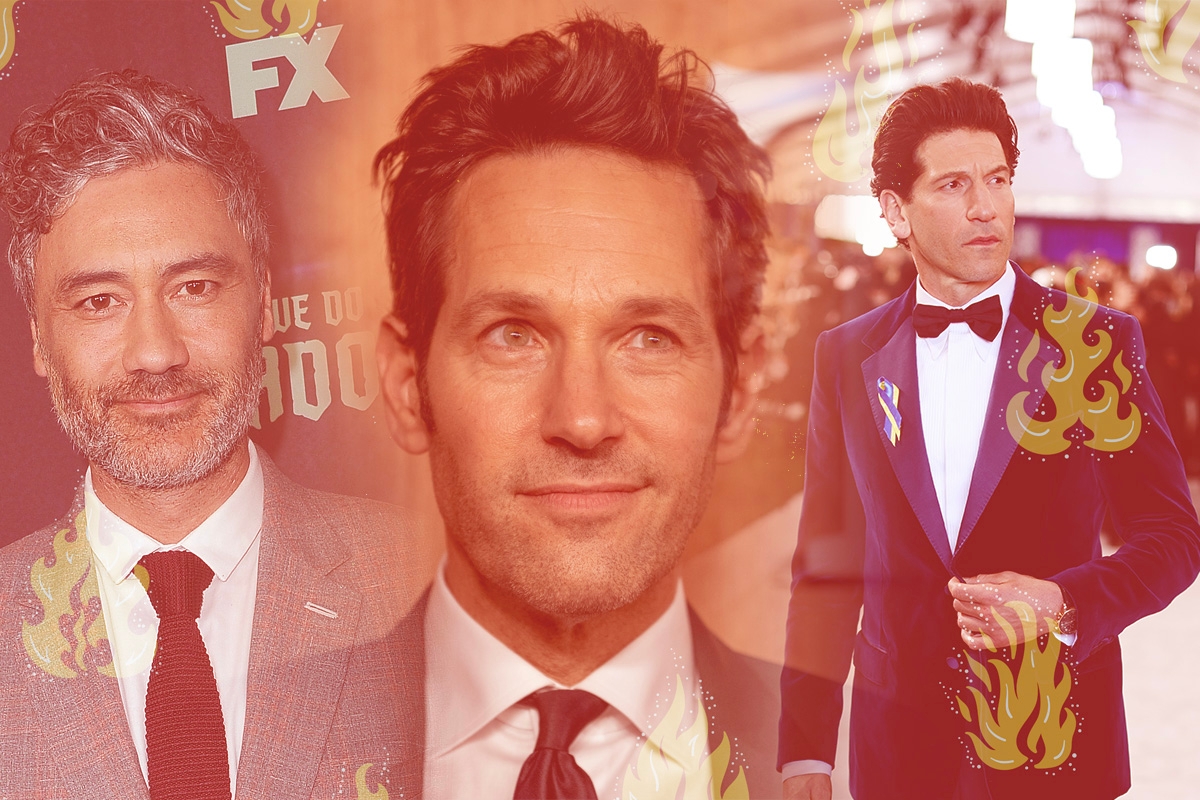 Father’s Day is once again upon us and we thought, what better occasion to celebrate hot Jewish dads? What makes one a hot Jewish dad? Well, as beloved TikTok phenomenon Elyse Myers says, “hot is a choice, I’m hot because I say so.” These Jewish dads, they’re hot because we say so. (My apologies to anyone on this list who doesn’t identify as hot, but also, maybe reconsider?)

We’ve assembled a non-comprehensive list of jaddies, (a term coined by actor Brett Gelman, who defines the term thusly: “It’s a Jewish zaddy! Elliott Gould’s a Jaddy, but so is Adam Sandler. Especially like an ‘Uncut Gems’ Adam Sandler. The Sandman is a major Jaddy. It’s like a sexy, Jewish, masculine man.”) and hot Jewish dads. Is this list an excuse to salivate over some Jewish hotties? Yes, of course, we’re only human! But it’s also an opportunity to celebrate Jewish dads that we think are hot stuff for reasons beyond physical attractiveness.

With that being said: let the ogling begin!

Born Taika Cohen, the Jewish Māori actor, director and father of two is honestly a level of hot that makes me a little uncomfortable. Like he silver-foxed too close to the sun. This man oozes sexy energy at a level that feels unsafe and possibly hazardous to the environment.

Aside from his looks, his next-level charisma, and his talent as an actor and a creator, I think Taika Waititi is a hot Jewish dad because he stars in a show that made so many LGBTQ+ people feel seen, validated, and celebrated this year — “Our Flag Means Death.” The show, in which Waititi plays Blackbeard, features gay and nonbinary characters and actors and became a total cult hit thanks to TikTok. (P.S. in case you’re looking for more pirate representation in your life, yes, there were Jewish pirates).

Um, we love a man who can sing and act like nobody’s business and also plays tiny Uno with his daughters. Gad is a total Jewish hottie, and yes, a mensch. He spoke out against antisemitism, helped people parent through the pandemic, and is generally a provider of much Jewish joy. This is a man who says his Jewish mother’s birthday should be a National Holiday.

Here he is inadvertently giving us some Anthony Bridgerton vibes:

Paul Rudd is People Magazine’s sexiest man alive and honestly, I concur, I concur a million times. Not only does this man look like he made some Dorian Grey-ish deal for eternal youth but also he is funny and quirky and doesn’t seem to take himself too seriously. The Jewish dad of two says dad is his favorite role (cheesy but aw) and he loves his wife Julie Yaeger.

I’ve absolutely had a crush on Andy Samberg since his early SNL days and I know I’m not the only one. Samberg exudes genuine nice Jewish boy energy. He also gave us such lovely Jewish representation as Jake Peralta in the cult hit “Brooklyn Nine-Nine” (we miss it so much). Samberg is married to incredible harpist, actress and singer-songwriter Joanna Newsom and we love that he knows just how lucky he is. The two had a daughter in 2017.

Samberg embodies the eternally young dorky Jewish dad look and if that’s not a type I don’t know what is.

We love us a tattoo-ed popstar with the voice of an angel who features incredible Jewish women in his videos. The Maroon 5 frontman is a Jewish dad of two and also a man who looks at his Jewish mom like she hung the moon, and we love him.

Lenny Kravitz rhymes with schvitz (the yiddish word for sweat!) because that is what he makes us do when we see pictures of him (you thought an article about Jewish dads would not have lame Jewish dad jokes? Well, joke’s on you). Seriously, the musician and actor, who was named after his Jewish uncle, is the definition of dreamboat.

Kravitz is also so sweetly supportive of his daughter Zoe Kravitz (whose mother, Lisa Bonet, is also Jewish). Here he is watching her host SNL, kvelling about seeing her “shine” in “the building where [her] grandparents met and work.” Love that so much.

Bryan Greenberg became a dad of twins this year when he and wife Jamie Chung welcomed their babies via surrogacy, a thing which, in my eyes, made the very dreamy Jewish actor and musician even more indescribably attractive. I mean, look at this dad dad-ing.

Greenberg also recently talked about his Jewish identity in the great YouTube special “Recipe for Change: Standing Up to Antisemitism.” We love a thoughtful Jewish dad.

Does it feel weird to thirst about Andy Cohen? He is the sweetest, wholesome Jewish dad of all, and we love seeing pictures of him and his kids. But also, let’s face it, this is a handsome Jewish man we are talking about.

I mean, can we talk about this picture of young Cohen, please?

The internet loves Adam Sandler, and his recent film, “Hustle,” is actually getting really good reviews. We love Sandler for being this incredible Jewish dad who will do anything to lift up his daughters, bringing them on stage to sing a Jewish version of Taylor Swift’s “Lover” and throwing them opulent birthday bashes that are tailored to their interests. We also love that he’s known for just being a really supportive, generous person to work with. And let’s face it, nobody wears basketball shorts quite like him.

Jaddy energy all the way.

Ugh, the brooding energy of Tsahi HaLevi is legendary. The “Fauda,” “Hostages” and “Mossad 101” star recently became a father for the second time when his wife, Arab-Israeli TV anchor and actress Lucy Aharish gave birth to their son Adam (he has an 18-year-old son from a previous marriage.)

HaLevi and Aharish’s wedding did draw some controversy, as marriage between Jews and non-Jews in Israel is still, so very unfortunately, a hot topic. And while that’s infuriating, it’s also undeniable that their union helped further normalize marriages like theirs. These two are absolutely adorable together, HaLevi is just a darling dad, and yes, also very hot.

We love a hot Jewish man who also gifts us with cerebral quality TV. Raz is the creator and the star of the cult hit “Fauda” and the, honestly not-so-great but still bingeable Netflix show “Hit & Run.” He’s currently about to star in the Apple TV+ anthology series “The Crowded Room.”

He’s also a Jewish dad of three. Look at him being cute with his youngest:

Design daddy! We love Berkus for being able to make any room look fab and any cardigan look the height of fashion. The Jewish dad of two is so stylish and we love it.

Well, this list has serious silver fox energy, but I couldn’t possibly not include the very, very easy on the eyes and ears Lior Ashkenazi. The 53-year-old Jewish dad says his first language was Ladino. He’s acted in countless films and TV shows, and he’s also outspoken about his politics and not afraid of being cast in controversial roles. And yes, he is, in the word of another Jewish dad “really, really, ridiculously good looking.”

The Jewish dad of three who rose to fame in “The Walking Dead” and “The Punisher” and who is currently starring in the HBO miniseries “We Own This City” can be our daddy, please and thank you.

This man is like (kosher?) wine — he just gets better with age. Goldblum, who has two kids with wife Emilie Livingston, is a fashion icon, a gorgeous male specimen, and possibly the quirkiest man alive, and we love him for it.

Happy Father’s Day to all the hot Jewish dads! Remember, hot is a state of mind.