This Adorable PBS Show Will Teach Your Kids About Golda Meir 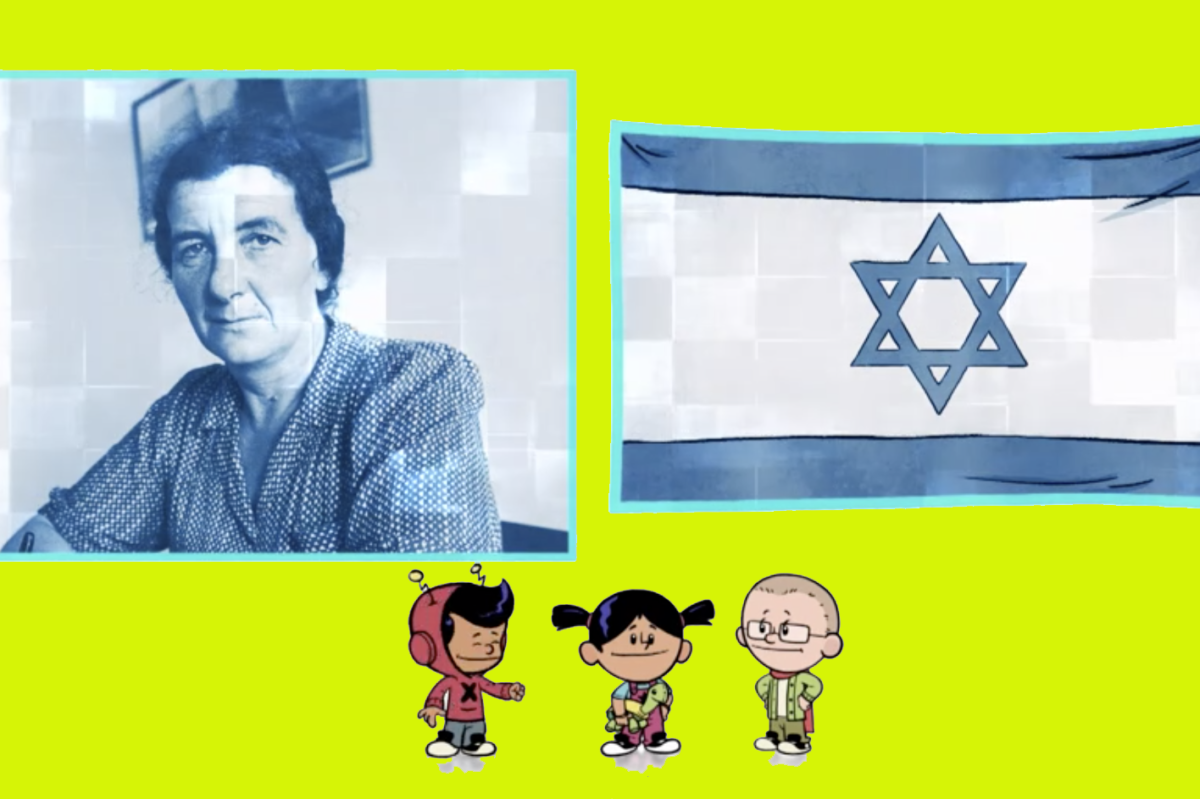 If you think Israel’s first (and only) female prime minister, Golda Meir, would make for inspiring TV show for kids, well, you’re not wrong! The PBS series Xavier Riddle and the Secret Museum dedicated an episode to the Jewish leader, who grew up in Milwaukee, and it is seriously super cute.

If you’re not familiar with Xavier Riddle and the Secret Museum — and, hey, no judgements; it just started this month! —  the show follows one Xavier Riddle (duh), plus his friend Brad and sister Yadina, as they solve problems and challenges in their own lives with the help of a time machine. This incredible machine is located in a secret museum, which takes them to meet some of history’s most iconic figures — when they were kids!

As the show’s tagline says, “Every boy and every girl has what it takes to change the world!” It’s exactly the endearing and empowering messaging our kids need.

As it happens, Meir isn’t the first Jewish historical icon Xavier and pals meet. In one episode, Jewish magician Harry Houdini teaches Brad to get over his fear of spending a night at the museum. (Cute!)

But back to the Golda Meir episode, which you can watch with your kids on the PBS website!  This one centers on Yadina, who is obsessed with turtles. She finds herself in a quandary: She wants to protect turtles crossing the bike lane in the park from errant bikers (and trikers!) but she is only one person! What can she do?

To find a solution, Yadina, Xavier, and Brad go to the museum. The museum sends them to Milwaukee in 1908, where they meet 10-year-old Golda (who, back then, was known as Golda Mabovitch — no word as to whether she had a pet turtle).

When the friends meet Young Golda, she is upset — her friend can not afford to get school textbooks, and she is not the only one in need. So, Yadina, Xavier, and Brad join Golda in helping her find a solution. After snacking on rugelach at Golda’s family’s grocery store (lucky ducks!!), young Golda comes up with an idea: In order to help those in need of books, she starts the American Young Sisters Society. She lets her whole neighborhood know about the problem — and manages to raise the money necessary for the textbooks with the help of her community. 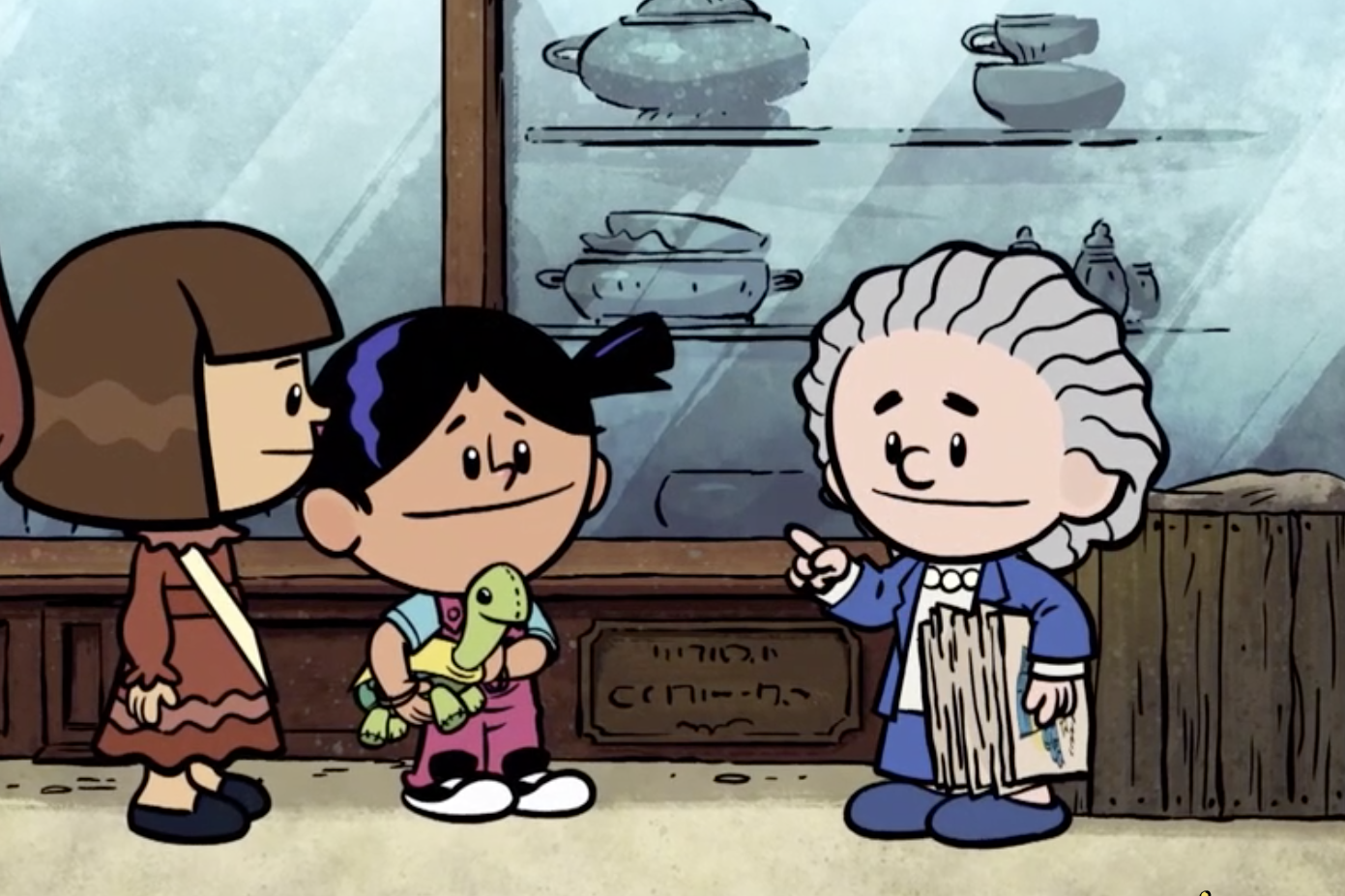 Golda’s resourcefulness inspires Yadina to find a solution for her turtle troubles. Drawing on the same themes of community and teamwork, she tells everyone about the problem with the turtles and the bike path. What happens next? The local ranger creates a sign drawing attention to the turtles, and the problem is solved.

Golda’s charity story is incredible and, of course, totally true! Golda Meir had only been the U.S. for two years — her family came from Ukraine — when she started the American Young Sisters Society. She threw a fundraiser where her improvised speech helped raise money for textbooks for local kids. As one newspaper wrote at the time: “a score of little children who gave their play time and scant pennies to charity … on their own initiative.”

Golda, who went on to help others as a teacher and a Jewish aid volunteer in WWI, later used her improvisational skills when she gave an off-the-cuff speech in front of the General Assembly of the Council of Jewish Federations and Welfare Funds in 1948 and managed to raise $50 million for military aid for Israel’s Haganah.

After working tirelessly for Israel, Golda was about to retire from her political career when Levi Eshkol, the country’s prime minister, died. She then became Israel’s fourth prime minister, and one of the first female heads of state in the history of the modern world.

We love how this show tells Golda’s origin story in a fun and accessible way. In the episode, the kids also discuss the fact that she was Jewish, as well as her historic role as the prime minister of Israel, a country that she helped establish! As Yadina says in the episode, Golda “is totally [her] hero.” And we hope her heroism will inspire even more kids, thanks to this adorable show.

Image via screenshot from PBSkids.org