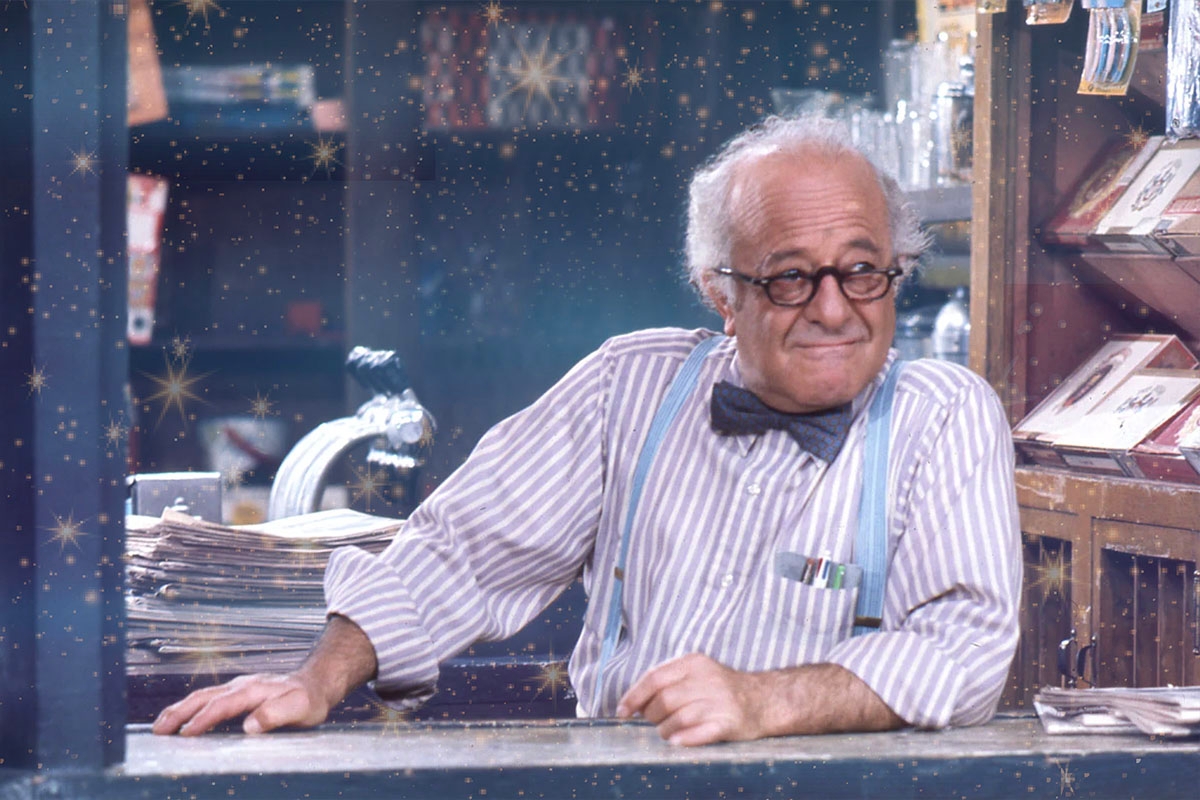 I grew up on “Sesame Street” in Israel (Moishe Oofnik FTW!) so I know that Jewish languages and the classic kids’ show go together very well.

Yet, a 1974 sketch from the show that features Yiddish — as well as American Sign Language and Spanish — has me feeling all kinds of feelings.

The video was recently shared on twitter by Joshua Raclaw, who said he was “losing it” at the lovely video, which takes place in the shop and diner of Mr. Hooper, the street’s resident greengrocer played by Will Lee, one of the show’s original cast members.

Losing it at this adorable video from 1974 of Yiddish, ASL, Spanish, and English all being used alongside each other on Sesame Street 😭 pic.twitter.com/ksyoCwHGsX

In the sketch, three groups of people are seen chatting — one in ASL, the other in Spanish, and Mr. Hooper and Big Bird chatting in English. Then the phone rings and Mr. Hooper excuses himself to answer.

He then starts speaking in a language it’s clear no one at the shop recognizes. They all look at him quizically as he animatedly talks on the phone. Mr. Hooper then pauses to briefly explain that the language is Yiddish.

Those with peripheral Yiddish knowledge can make out what Hooper is saying — greeting his Aunt Sarah (Tante Sore), telling her it’s good to hear from her, and asking her how she is (you can find the whole translation here, courtesy of the Yiddish Book Center).

After informing his friends of the language he’s speaking, he tells his aunt on the phone that the whole mishpokhe is there‚ using the Yiddish word for family, and starts naming everyone at the shop. It’s just so incredibly sweet.

It’s also a gorgeous moment of co-existence, a celebration of languages and diversity — and more importantly, of community. Honestly, everyone needs to watch this sketch.

Those who grew up on the original “Sesame Street,” which first aired in 1969, should have intimate knowledge of Mr. Hooper. He was not only one of the first non-puppet cast-members of the show, but also one of its most popular and most well-liked ones, with his white hair and widow’s peak, his half-moon glasses, his bowties, suspenders and white apron, and his gruff yet friendly demeanor.

Lee, himself, was a product of New York City. Born to a Jewish family in Brooklyn, he was the son of a bookbinder who lost his job during the Great Depression. He found his artistic home in Greenwich village, where he became part of the city’s theater scene, including as a member of the Group Theater and co-founder of Theater in Action. During his military service in the Army Special Services in WWII, he put on stage shows for troops overseas.

He appeared in many Broadway shows, including “The World of Sholom Aleichem” on Broadway. Lee was also blacklisted for half a decade during the McCarthy era for being a member of the Actors Workshop and being an “unfriendly witness before the House Committee on Un-American Activities” hearings.

Lee was proud of joining “Sesame Street” — he said that “the show has something extra, that sense you sometimes get from great theater, the feeling that its influence never stops.”

Lee had a lot of latitude in creating his character for the show, and he brought his Jewish identity along with him to play Mr. Hooper. That 1974 skit was not the first or last time Hooper brought Yiddish and Judaism to the show, peppering his speech with words in the Jewish language and even reading a Yiddish paper in one episode. In the show’s Christmas special, he gets wished a “happy Hanukkah.”

It’s so beautiful to hear him with that gruff, kind and patient voice both sing and explain the Yiddish.

Lee was on “Sesame Street” for over 13 years. He died of a heart attack in 1982. After his death, Joan Ganz Cooney, president of the Children’s Television Workshop, said that Lee “gave millions of children the message that the old and the young have a lot to say to each other,” which truly was his legacy.

Yet that legacy didn’t end with his death. After he died, the show decided not to explain away his disappearance in some fantastical way, but instead, take it as an opportunity to talk to kids about death in an age-appropriate and honest way. In writing the episode, the show consulted with psychologists and other experts to make sure they treated the subject with the reverence it deserved. It made for one of the show’s most memorable — and important — episodes.

All these years later, Will Lee and Mr. Hooper’s memory remains such a blessing for an entire generation of kids who grew up on “Sesame Street.” And for those of you raising young kids, maybe it’s time to introduce them to the magic of Mr. Hooper!