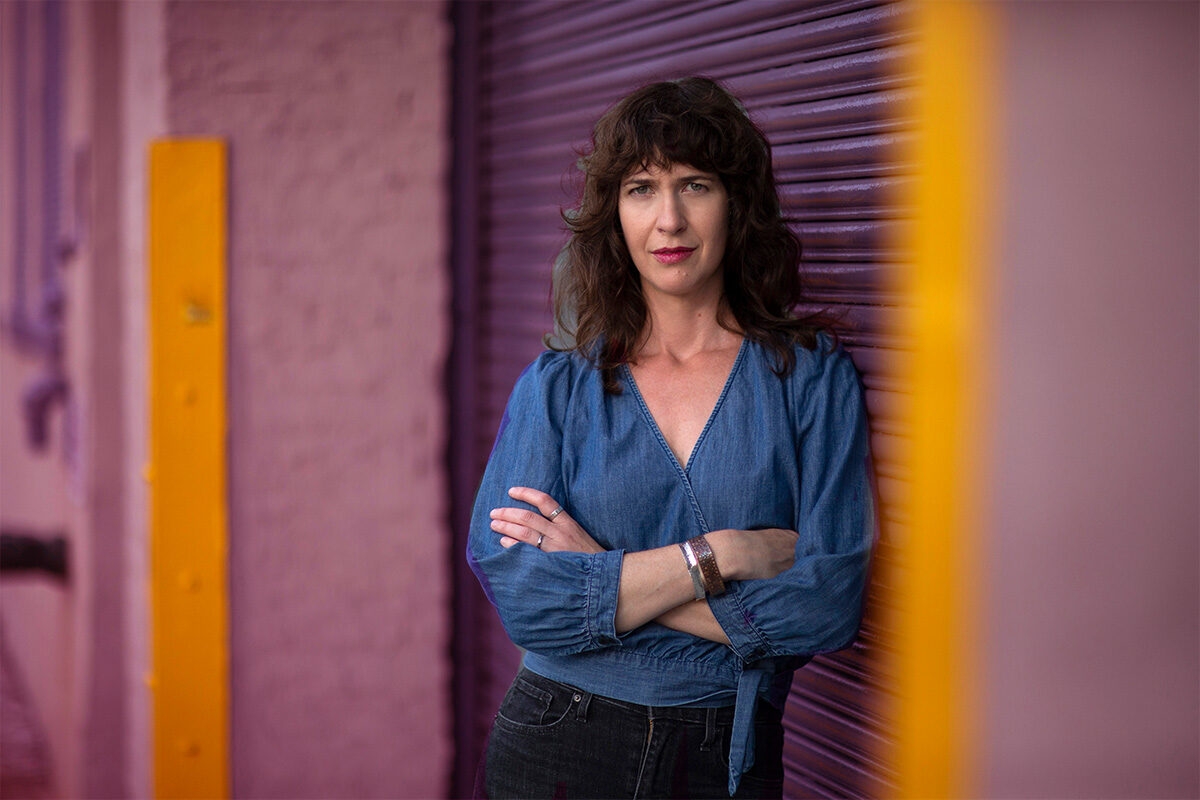 Like so many of us, writer Anna Solomon is getting through quarantine as best she can. She’s finding small joys in dance parties with her kids, a 12-year-old daughter and 7-year-old son, and spending a lot of time outdoors in Cape Ann, Massachusetts, where Solomon grew up. (Normally the family lives in Brooklyn; you can read her quarantine diary here.)

Solomon is gearing up for the publication of her third novel, The Book of V., which is an inventive “remix” of the Book of Esther, the story of Purim. At its heart, the wide-ranging novel is about the relationships between women, and it covers three different timelines: there’s Ancient Persia, where we get Esther and Vashti like you’ve never read them before; 1970s New England, where Vivian, a senator’s wife, flees to her friend’s house after a disastrous night; and modern-day Brooklyn, where Lily is navigating being a mom to two young daughters.

“As a kid, I believed that Esther was the hero,” Solomon explains to me over the phone. “And I dressed up as Esther like all the other girls and I bought that story. But there was always this sort of niggling voice in my head, like, What’s the deal with Vashti?  What’s so bad about her? And why do they think she’s a leper? Also, Where does she go? Those questions stayed with me.”

Over the course of our conversation, we chatted about how her perception of Vashti changed as she got older, her decision to structure The Book of V. like she did, and how she talks to her kids about the tough parts of the Purim story.

What has releasing, and promoting, a book been like for you in the middle of all this?

It has been a ride. It’s always an intense time when you have a book coming out — and then to do it in the middle of a pandemic, when there are so many things for everybody to be concerned about that are much more important than a book! [But I] still believe in the book, and believe in the power of stories to bring people together and connect people. Especially in tough times.

And so to continue the work of promoting it, and doing all these events and interviews with children underfoot  — all of which I’m so grateful for, but it’s really challenging. Even on a purely like logistical level, figuring out how to find quiet spaces, how to light oneself. It is definitely many challenges that I think most of us authors have never really faced before.

The story of Lily, the present-day character in the book, focuses on her trying to balance everything. Do you find her especially relevant right now?

Yes, it’s so relatable. Someone asked me, What would Lily be like in quarantine? And I was like, Oh, my god, she would maybe jump out the window. I mean, she wouldn’t. But I think that all of the the minutia, and the questions of what it means to be a mother and a wife and somebody who’s balancing your intellectual life with homemaking and with meeting other people’s needs — those questions are really pulsing right now for everyone. Not just women, for men, too, maybe in ways that they haven’t even experienced before.

What drew you to the story of Vashti and Esther in the first place?

Since I was a girl, I’ve always been really intrigued by Vashti, sort of as this mystery character. What happened to her? In the Purim spiel, she makes a very brief appearance — usually the person who played her was dressed like a prostitute — and it was always like, oh, she’s clearly bad. And then she disappears, and Esther is introduced. She’s a vehicle for Esther to enter. But as I looked at the story as an adult, and — wait a second — I don’t understand why her refusing to appear naked is “whorish.” And, wait a second, Esther is actually in a harem! The story is traditionally told with very clear dichotomies; the story is meant to be about good and bad. But looking at it again, from a feminist lens, what if, maybe, good/bad and virtuous/wanton and aggressive/meek are, in fact, not as straightforward as they appear.

What made you decide to transpose it onto the 70s and our current day?

I was born in the 1970s, and raised at a moment when I think a lot of us were kind of being promised that the need for feminism was over. Like, this is it — and now our lives would look however we wanted them to look, and that they would be equal to men’s lives. As I came into my own own marriage and then into motherhood, it was recognizing, well, yes, there are so many ways in which we’ve made progress, but then there are so many ways in which my life — especially my internal life, my experience of my life — is not so different from my mother’s and my grandmother’s and the women who came before them. So that was another key point of questioning that I brought into the story, and why I wanted to tell a story that stretched across generations and millennia.

I loved the decision to structure the book as the biblical story, then overlay two more modern tales. Did you know going into writing it that you were going to have these three narratives?

I did go into it with those three different stories. I knew pretty early on how I wanted to structure it. It was kind of like writing a symphony to actually do the structuring; the first time through, it wasn’t like the pieces all braided together in the right way. So there was a lot of revision. I do a lot of use of index cards up on the wall in different formations to figure out what shape it was going to take — it was a real structural challenge.

One book that was really influential to me, other than the Book of Esther, was The Hours by Michael Cunningham, which does a kind of similar thing with Virginia Woolf’s Mrs. Dalloway. in that there’s this one story that is about the creation of that book, and then the other storylines are women living out and reckoning with that story. It helped me see that there was a way to do it, in this case with the Book of Esther. I realized that part of what I was doing was creating my own version of the question, How did this book come to be?

I went to Hebrew school and I work for a Jewish media company, but I was like, wow, this story of Vashti and Esther is so interesting! It felt so new. What are some of the challenges you faced in writing a story that people, particularly Jews, know so well?

There’s a very Jewish word to answer that question, which is chutzpah. It took fighting off the voices that said, You’re not allowed to do this. Or, What if people are offended by your take on this story. One of the great things about fiction — at least myself in fiction — is that I’m not making an argument. I’m not saying, This is what really happened. Or, This is how you must think about the story. I’m asking questions, my hope is that I’m opening up possibilities for people to consider.

I chose to make the Ancient Persia parts very explicitly full of magic [to] make it very clear that I was not attempting to try to describe an accurate version of what life was like in ancient Persia. One of the things that was very thrilling, as a novelist working on this book, was that the more research I did, the more I understood that nobody has any idea how the Book of Esther came to be. It’s very unclear for the most part what it was like to be Jewish in Ancient Persia. And for the most part, the resources, when you look into this question — what was it like to be Jewish in Ancient Persia — everything leads back to the Book of Esther. As a novelist, that’s like, all right, so nobody knows!

Do your kids know the story of Vashti and Esther? Have you told them your own version?

They do, they know it. I actually published a piece wrestling with teaching my kids the story. One of the things that happened over the course of writing this book is that I came to be able to talk with them much more openly about the darker parts of the story. It’s full of sexism, there’s genocide — the happy ending of the story is basically that the Jews kill all the Persians! In the course of really coming to re-invent this book, it helped me open up that conversation with them, and it’s actually helped me understand better how to talk with them about all sorts of stories.

What draws you to writing Jewish characters in fiction?

Honestly, it’s not something I’m very conscious about — it’s very natural, because it’s who I am. I wind up writing about a lot of characters who aren’t Jewish, as well. That balance reflects how I was raised; I was raised Jewish in a place that there weren’t very many Jews. And so I do have both a very Jewish sensibility and a New England, very not-Jewish perspective and consciousness. Both of those things are brought to bear in all my work, whether I’m writing about Jewish characters or not.

Do you consider yourself a Jewish writer?

I mean, I am a Jewish writer. I’m a writer and I’m Jewish, in the manner that I’m a woman, so I’m a woman writer. Ideally, we would all be writers, and then we write the things that we write. I think of myself first as a writer, second as a woman, and maybe then American and Jewish are vying for the next spot!

Who is your dream audience for The Book of V.?

Oh, gosh. I mean, I hope that it finds a really broad audience! The women in this book are everywhere from 17 years old to their late 70s. I hope that different generations of women will be drawn to this book. I would love it if men read this book as well! But I do see this as a book for my mother and for my daughter and all the others in between.