This ‘Star Wars’ Hanukkah Parody Is Out of This Galaxy 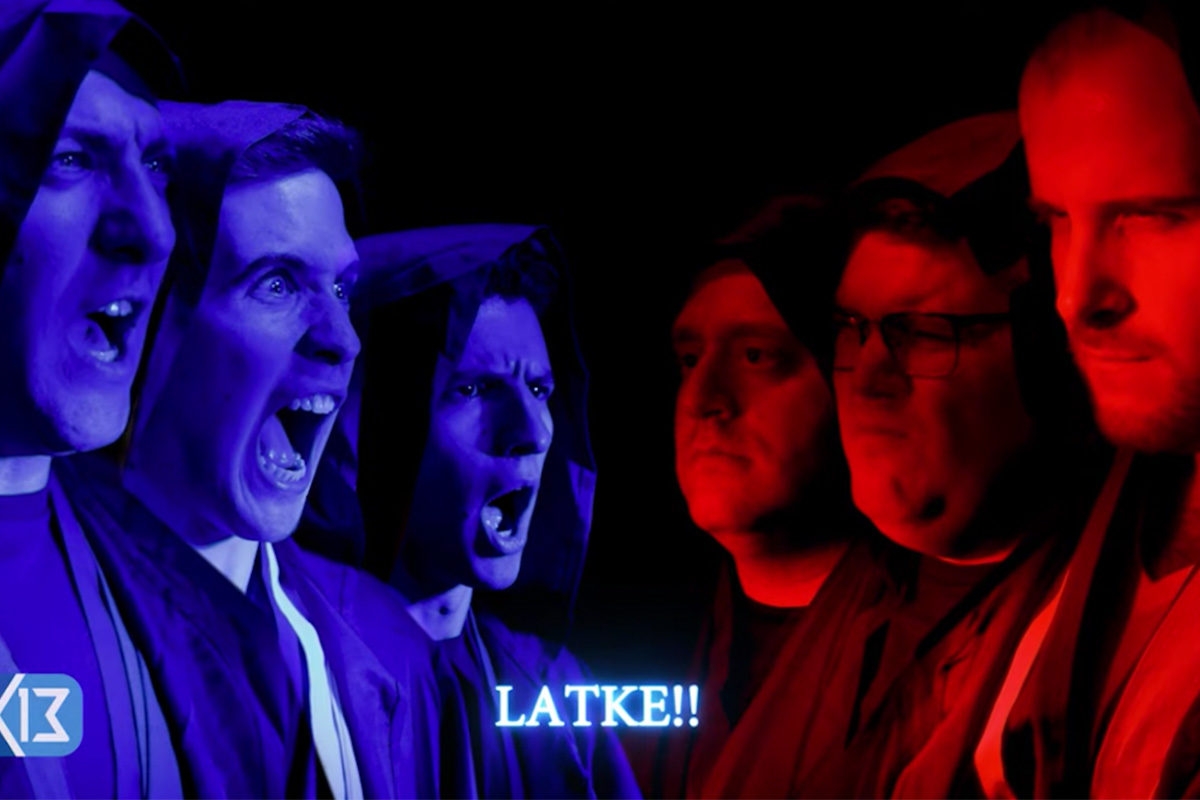 Jewish a cappella band Six13 have done it again — without even trying! (Because, as our sage Yoda himself says: Try not. Do or do not. There is no try.)

Just why are we dropping some Star Wars knowledge here at Kveller? Here’s the scoop: Last year, Six13 blew our minds with their amazing “Bohemian Rhapsody” Hanukkah parody. This year, they’re back with a vengeance with this most excellent Star Wars Hanukkah parody. It comes just in time for the release, on December 20, of Star Wars: The Rise of Skywalker (and riding on the coattails of The Mandalorian series on Disney+.)

It’s hard to decide what the best part of this video, which is an A+ medley of our favorite Hanukkah songs and prayers set to the epic tunes John Williams composed for the Star Wars films. This video is true Jedi mastery. Love it, we do!

The video opens with the trademark Star Wars opening crawl, depicting the story of “Episode DCXIII: The Rise of the Maccabee!” The text is, of course, accompanied by the iconic Star Wars opening theme, sung here in a delightful a cappella style.

Then, there’s an excellent rendition of “Sevivon, Sov Sov Sov,” the Hebrew Hanukkah song about a spinning dreidel, to the tune of “The Imperial Death March.” It’s sung, a cappella, of course, by singing Jedis — whom, we believe are meant to stand in for the Maccabees. Two of them are reading Torah when Darth Vader (whom we assume is a stand-in for Greek emperor, Antiochus) walks in. They then hide their prayer books (which were outlawed by the Greeks) and play a game of dreidel, to an approving Darth Vader (some rabbis believed that Jews did this to fool the Greeks, but it’s actually a myth!)

We then witness a Jedi fight between latkes and sufganiyot (Hanukkah jelly donuts) set to “The Duel of the Fates” from Episode I, The Phantom Menace. (Some argue this song is the best thing about that movie. But, haters, don’t worry: There’s not a Jar Jar of applesauce in sight.) Instead of the employing traditional light sabers, our daring fighters duke it out with a neon red pan (for team sufganiyot) and neon green tongs (for team latke). Which makes us wonder: Do the sufganiyot represent the dark side?! (If they do, we’re signing up to be Storm Troopers right now!) Alas, no word yet about which oily side won this delicious battle!

The video concludes with the Jedis/Maccabees victorious as they enter a synagogue with a glass oil candle meant to serve as the shamash. They’re singing the Hanukkah blessings to yet another excellent Williams tune, the victorious ending theme from Episode IV.

The Jedis’ families are waiting for them in the shul, including a Jewish princess Leia with challah buns in place of an elaborate twin-bun hairdo. (Leia — or is it Leah? — then hilariously bites into one of the buns. We seriously LOLed at this part.) The Jedis then light the menorah with the light saber (of course!) and the video ends with a hearty, “chag shameach!”

This incredible — and incredibly fun — video is a wonderful reminder of just how epic the Hanukkah story really is. We plan to watch this video at least as many times as we plan to see The Rise of the Skywalker this season! May the force be with you, and yours! Happy Hanukkah!