All the Jewish Things to Stream on Disney+ 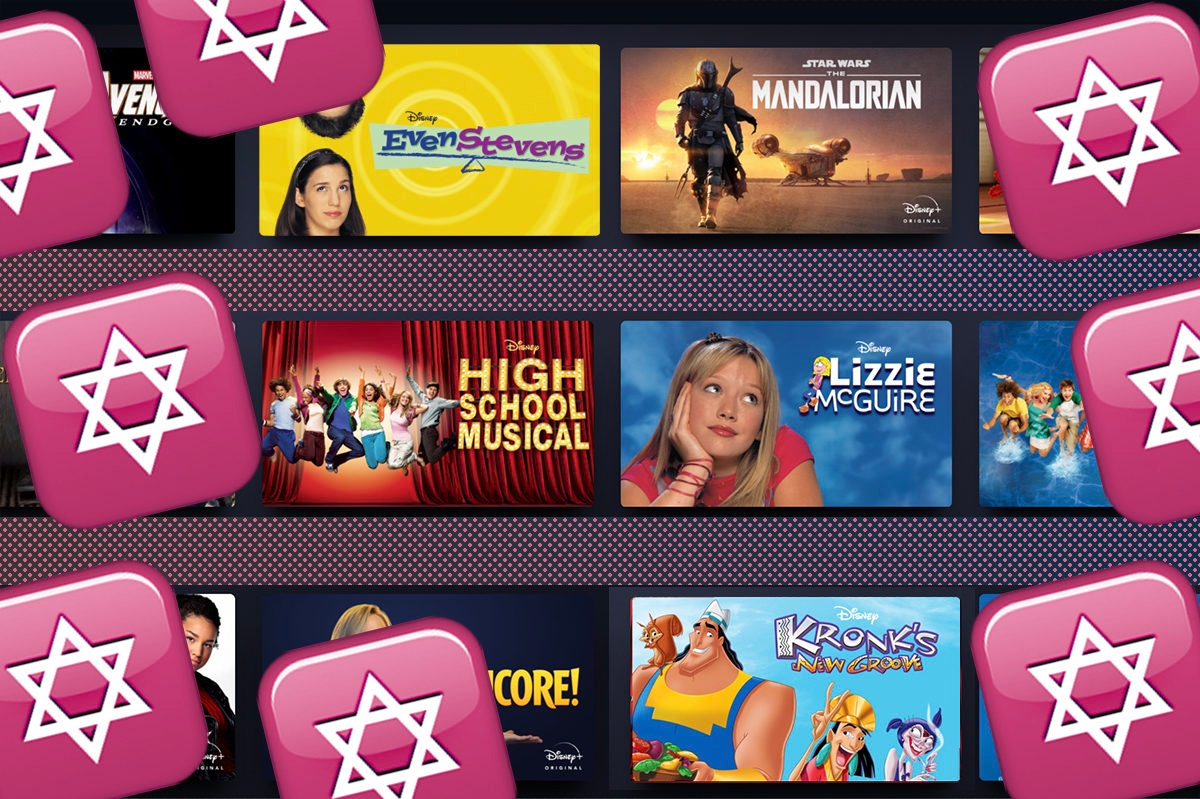 Despite some initial glitches, the much-awaited Disney+ streaming service is here! And if you have kids, this service has so much going for it. There are some exciting new offerings — including a new Star Wars series and a fun Sunday craft show — and there are, of course, the classics that will bring back so many memories, such as Robin Hood, The Sword and the Stone, and The Parent Trap, to name but a few.

In that boon of new (and old) programs, there are some surprising Jewish characters and stars! So if you’re struggling to figure out what to watch out of all this wealth of programming, consider one of these Jew-ish or Jewish shows and movies:

The following shows and movies have no real mention of Judaism but feature some really exciting Jewish stars.

OK, so the new Star Wars series most likely doesn’t have anything Jewish about it, content-wise (though ICYMI, there are a few Jewish things about Star Wars lore), but it is directed by Jewish director Jon Favreau and does star one of our most favorite Jewish dads, Taika Waititi, in a very special role, a robot! He plays IG-11, naive robot who does not understand sarcasm… so, um, likely not a very Jewish robot at all? Still, we are very stoked for this show, which is already getting rave reviews.

The World According to Jeff Goldblum

Jewish dad Jeff Goldblum hosts this show, a deep exploration of all the things he’s fascinated by, including sneakers and tattoos. The show is hosted by Goldblum (duh!) who manages to be both enthusiastic and deadpan at the same time, and it’s actually delightfully informative.

Ant-Man & Ant-Man and the Wasp

We have to put everything starring Jewish dad and ageless actor Paul Rudd in all Jewish lists. It’s just the rule. Plus, in this movie series, he plays a very (very, very) diminutive character, a trait some Jewish men (and women) may be familiar with. Here’s to Paul Rudd and short Jewish men!

No, there’s nothing Jewish about these classic and amazingly popular (at the time) Disney movies, but they do star Zac Efron, a very notable Jew!

This classic, campy horror movie about witches stars Bette Midler and Sarah Jessica Parker, some of our favorite Jewish moms around. It also stars retired Israeli American actor Omri Katz as Max, the young protagonist. Plus, Disney+ has a reboot in the works. It’s spooky and exciting stuff!

The following shows and movies have some minor and major Jewish characters.

One of my favorite shows from the 1990s is finally available to stream for the first time. Gargoyles is a dark show about living, breathing gargoyles and does have some Jewish characters, notably the Golem, and Matt Loews, who reanimates him. Then there’s NYPD detective Matt Bluestone, apparently also a member of the Tribe.

The fun Disney show from the early 2000s stars Shia LaBeouf as Louis Stevens, the up-to-no-good youngest son of the Jewish Stevens family. The family matriarch, Eileen, is a kickass, empowered state senator. Heck, there’s even a Hanukkah episode!

David Gordon, aka Gordo, is one of the main characters from Lizzie McGuire. He is an adorable filmmaking geek — and, wouldn’t you know it, he’s Jewish! Gordo had a bar mitzvah in episode 31 of the first season of the show.

During the course of the series, Gordo develops a crush on Lizzie, and in the Lizzie McGuire Movie, the two eventually get together (much to the celebration of longtime fans!). However, in the much-anticipated series reboot, they are no longer an item, according to Hillary Duff (who plays Lizzie herself, in case you didn’t know). Still, we are hoping that Adam Lamberg —  who plays Gordo and is Jewish IRL — might have a cameo or two!

Phineas and Ferb’s good friend and neighbor, Isabella Garcia-Shapiro, is an important part of the show — and a Latina Jew! Her mom — who has a surprising Yiddish accent — runs a restaurant calls Nosh Olé, and the family celebrates Hanukkah.

Ron Stoppable, Kim Possible’s sidekick (and eventual boyfriend, ooh-la-la) is a Jew. In season 3, he gets a bar mitzvah certificate from his rabbi.

Did you that Kronk, the loyal sidekick from The Emperor’s New Groove (a lovely and underrated Disney film!), is a member of the tribe?! The character, voiced by Patrick Warburton, reveals his Hebraic roots in Kronk’s New Groove, where he fantasizes about marrying the object of his affection, Ms. Birdwell, in a Jewish ceremony, and breaking the glass! Mazel tov!

Sarah Silverman is the first Disney Jewish princess! You see, the character she voices in the Wreck-It Ralph movies, Ralph’s BFF Vanellope von Schweetz, is actually a royal in exile (as she reveals at the end of the first movie). You gotta kvell about that! Also, Ralph Breaks the Internet features a character voiced by our fave, Gal Gadot.

While Elena of Avalor‘s Hanukkah episode (!) starring Jamie-Lynn Sigler as a princess from a “Latino Jewish kingdom” (!!!) isn’t out yet, now is a great time to enjoy the series as a family in anticipation of this very Jew-y holiday episode! Hanukkah starts on December 22nd, so we assume the episode will air sometime around then. Exciting!

How could we forget this Hanukkah Disney classic (reader — we did). The 2003 film is based on a true story and is full of references both to the Hanukkah story and to Jewish rituals and beliefs. The main character Alex Schlotsky, played by the Jewish Alex D. Linz, is looking for a Hanukkah miracle for his Philadelphia Hebrew Academy basketball team. His search for a real life Judah Maccabee, if you will, leads him to find retired basketball player Lamont Carr and recruiting him to coach the failing team.