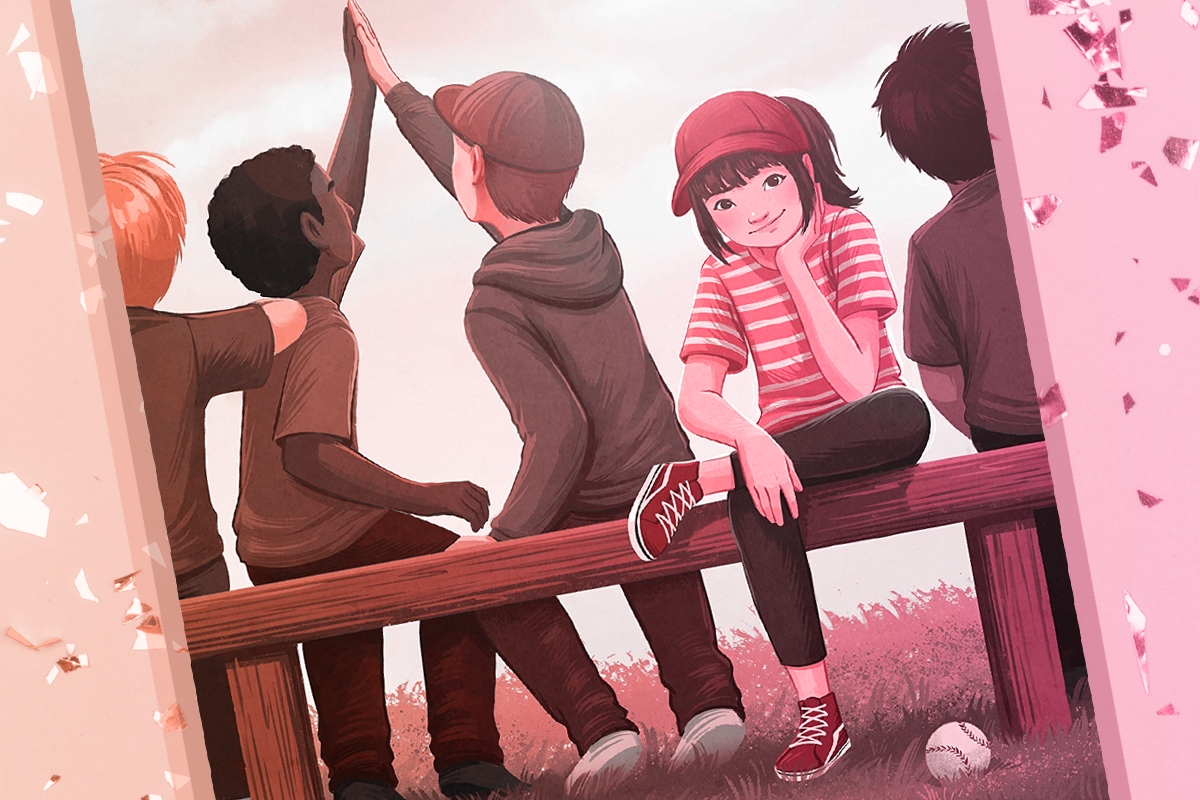 Sometimes, it’s just thrilling to find out that a book exists. That’s how I felt when I found out about Get a Grip, Vivy Cohen, a middle-grade novel about a young autistic Jewish girl who has a passion for baseball. Specifically, she’s determined to master a truly difficult pitch: the knuckleball.

The book, written by Sarah Kapit, an autistic Jewish author, is delightful. It is written as a series of letters between Vivy and VJ Capello, a fictional MLB pitcher whom Vivy admires. “I wanted the book to be epistolary because Vivy, like many autistic people, communicates better in writing than through verbal speech,” Kapit explains to Kveller over e-mail.

Vivy’s tale is wonderfully feminist — she is determined to make it as the only girl on a baseball team — and much of the book is focused on Vivy’s changing relationship with her family and the new friendships that she forms. “It is definitely significant that her relationships with other people are at the center of the book,” Kapit says. “So often autistic people are stereotyped as not caring for other people, and it just isn’t true.”

I asked Kapit about how she came up with the idea for the book, the importance of inclusion in baseball and representation in literature, and why it’s important to her to write stories about Jewish families.

How did Get a Grip, Vivy Cohen come to be?

For me, the book was really a culmination of a bunch of different things. I am, as you might guess, a lifelong baseball fan. A few years before I started writing Vivy, the TV show Pitch came out. Although the show was tragically canceled after the first season, for me just watching the preview was an awe-inspiring experience. As a woman baseball fan, watching a woman take the mound — even in a TV show — just felt so special to me.

Why was it important for Vivy to be Jewish? What does being Jewish mean to you?

To me, it’s always been natural to write Jewish characters because being Jewish has been such a critical part of my identity. It’s not always something I can easily articulate, but being Jewish is just such a part of me that it’s difficult to separate it from everything else.

Vivy is up against so much in this book — challenges stemming from her disability, yes, but also bullying, a controlling parent, and trying to break into a sport that’s usually reserved for men. Did you conceive of it as a feminist tale?

Yes! I didn’t want to be preachy about it or anything, but I am a feminist and my feminist sensibilities are definitely incorporated into the book.

Obviously, we’ve made great strides when it comes to getting girls into sports and other activities. But there are still spoken and unspoken restrictions on what a girl should do. For many disabled girls, especially, there can be an expectation that they should participate only in gender-normative activities. Oftentimes this is done with good intentions. Adults want disabled girls to fit in with their peers, and that supposedly means gender conformity. But it is actually really harmful because it tells disabled kids that they need to conform to gender norms instead of being whoever they want to be. I wanted Vivy to explicitly challenge those expectations.

Vivy’s mother, specifically,  doesn’t believe that her daughter can handle playing baseball. I think these tensions are felt in all parental relationships — the tensions between what our parents think we should do, and the passions and goals we have for ourselves — but disability adds another layer to that. It’s a world where parents are often the ones advocating for their children’s needs. Why was it important to you to show that dynamic from the other side, and what are you hoping readers will learn from Vivy’s evolving relationship with her parents?

Middle school is a tough age because you want to do more things and be more grown-up. At the same time, parents still (understandably) want to make sure that their kids are safe and thriving. For children with disabilities, this dynamic really is magnified.

I strongly believe that parents, including parents of disabled kids, need to help their children become gradually more autonomous. In the U.S., many schools ask that children become more involved in the IEP (Individual Education Plan) process as they get older and I think that’s great. So it was important to me for Vivy to learn how to advocate for herself.

I hope that kids can read Vivy and feel empowered. It is okay to have your own dreams and to chase them. Vivy eventually learns how to communicate with her parents in a way that works for her, and I hope that’s inspiring.

Who’s the personal hero with whom you’d like to correspond?
It’s really hard to pick just one. But if I had to pick just one, I think it would be Ed Roberts, who played a major role in kicking off the modern disability rights movement.

There’s a lot of diversity and representation in the book — Alex is Mexican American, VJ is Black, we also find out later in the book that one of the characters is gay. Why was that important to you?

Since Vivy is inherently a story about succeeding in spite of bigotry, it just made sense to me for the supporting cast to be diverse. Even though the other people in Vivy’s life aren’t autistic girls who play baseball, they can empathize with her in different ways. Although racism is different from sexism or ableism, VJ’s experience of racism allows him to understand Vivy’s experiences in a way that a white, non-disabled man probably could not. Comments about racism in MLB from Black baseball players like Doug Glanville and CC Sabathia helped shape the way I wrote VJ’s experiences.

I specifically wanted Alex to be Mexican American because the book takes place in California and Latinx people are so critical to the game of baseball today. Although there has not yet been an openly gay MLB player, I certainly hope that we’ll get to the point where LGBTQ athletes can be out. I wanted to show the diversity of people who love baseball while also acknowledging the ways in which the game still falls short.

Were there any books that made you feel seen and represented when you were Vivy’s age? Or is this the book you wish you had?

There were quite a few characters I related to as a kid: Meg Murray in A Wrinkle in Time, Harriet of Harriet the Spy, and Tobias of Animorphs. So I wouldn’t say that that I never saw myself in books. However, I do think there is a paucity of quality representation of autistic characters that are explicitly identified as autistic. Oftentimes we end up finding ourselves in characters who are not described as autistic, while the official autistic characters are stereotypes.

I feel like a lot of the books I grew up reading with disabled or autistic characters were definitely not #ownvoices. What do you feel are the main things that non-autistic writers get wrong when it comes to autistic representation? Do you have a favorite #ownvoices book with autistic characters?

I think a lot of non-autistic writers get things wrong. Oftentimes, the autistic character is basically a laundry list of every possible autistic trait. So, you don’t have a lot of individuality. These characters are usually male and obsessed with science. They don’t seem to experience emotions intensely, if at all.

My favorite #ownvoices book with an autistic character is On the Edge of Gone by Corinne Duyvis.

What are you hoping that readers will take from this book?
I hope kids take away the fact that they are OK just the way they are, even if the world tries to tell them they are not.

Image from Get a Grip, Vivy Cohen cover via Dial Books/Penguin Random House