You Need to Watch This Video of a Unicorn Doing a Yom Kippur Prayer. Trust Us. – Kveller
Skip to Content Skip to Footer 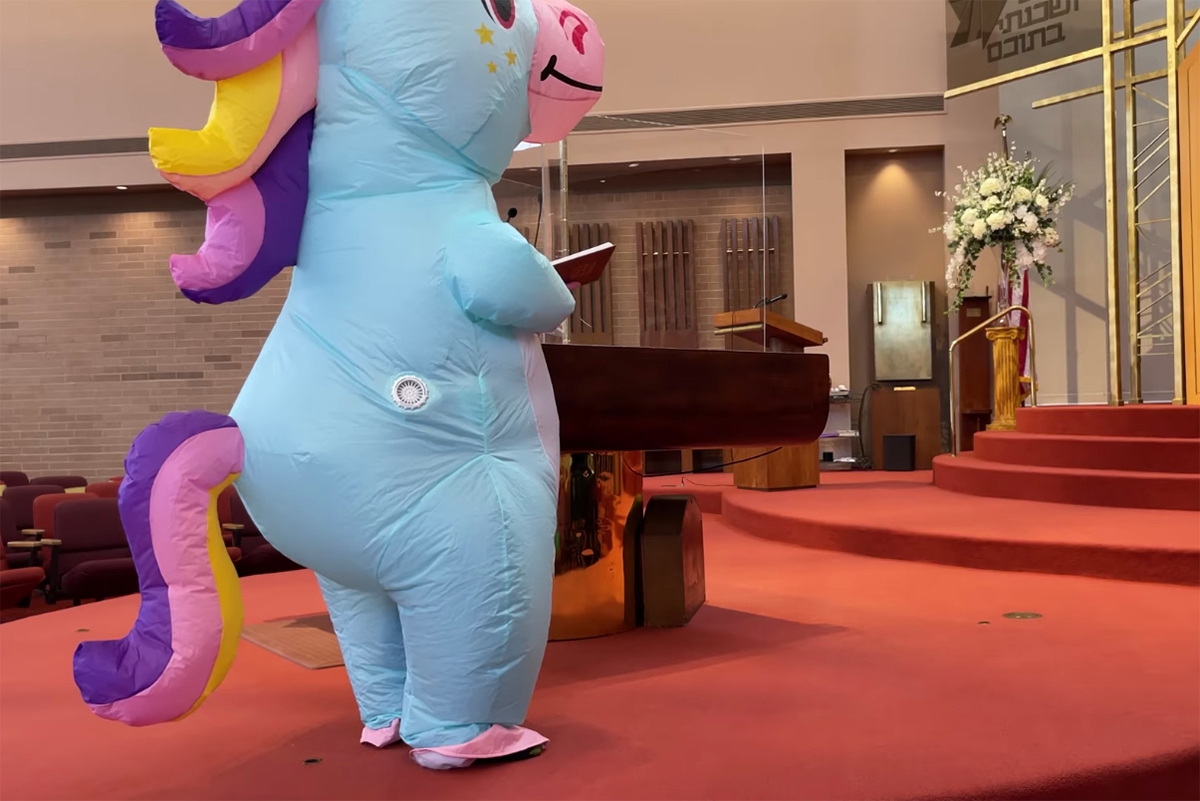 What do you do when your Jewish congregation experiences an extraordinary amount of loss in a short amount of time? Well, for one Florida-based cantor, the answer seemed obvious: You put on your unicorn costume and chant!

On Monday, Hazzan (Cantor) Jesse Holzer uploaded to Facebook a wonderfully entertaining video of himself chanting the “Aleinu” prayer while wearing an oversized unicorn costume. Holzer filmed the short video “on location” during lunch break at his workplace, the Jacksonville Jewish Center. When we saw it here at Kveller HQ, we just couldn’t help but watch it over and over again — it’s just that delightful. In fact, we would suggest not waiting another moment, and watching it right now:

We reached out to the father of three to learn how it came about.

“This year our community has been inundated with loss in the past few weeks (10 funerals in two weeks),” Holzer told Kveller, “so in between two funerals I went into my shul costume closet (yes that’s a thing) and got to work.”

The costume itself was procured in March 2020, before the pandemic hit Florida — Holzer managed to use it for an in-person celebration on Purim of that year. Then a year ago, during the High Holidays, he whipped it out to perform the “Avinu Malkeinu” prayer for Yom Kippur at his empty shul. In a video he filmed back then, he chants solemnly while wearing a tallit (prayer shawl) around the oversized costume.

“I figured out how to not wear a mask for the holiest days the Jewish year,” he wrote in the caption for that video. “I guess we all could use a unicorn in our lives anyways!” Holzer has since realized that the costume is not, in fact, Covid safe, and he now wears a mask underneath it.

In this newest video, Holzer chants the “Aleinu” — the short prayer that marks the end of all three daily prayer services — and prostrates himself before God at the end, as it is customary to do when chanting the prayer during Yom Kippur services. What happens after that is, arguably, the best part of the video.

As Holzer bends to prostrate, he topples over — planting the unicorn face-down into the hard floor of the bima. The fall was a happy accident: “It really was a full prostration, as planned, but the unplanned was how the costume would react,” Holzer explained.

I truly can’t stop laughing at how completely Holzer face-plants into the floor every time I watch this, and I delight in the few seconds at the end where the costumed cantor just lies on the ground, the tail on his costume bouncing softly. The mood of those final seconds is very, very 2021.

“I’ve been reflecting on this idea of clergy/Jewish professionals that have to be superheroes/unicorns when sometimes we just want to plotz (or prostrate),” he confessed.

As humans who are parenting through a pandemic, we all very much relate.