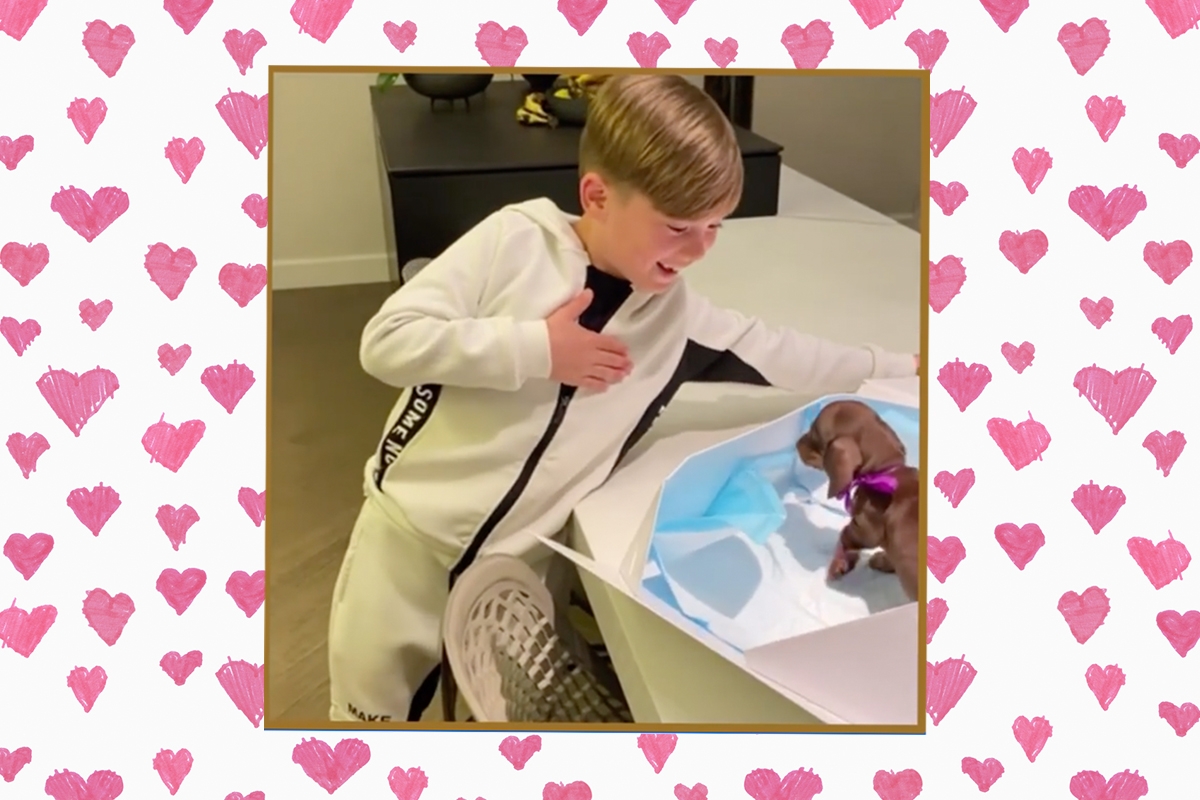 For three years, the adorable Roy Fryszer Guttman has been asking for a puppy. Last week, he finally got the coveted pet. His father, Yanai Fryszer Guttman, posted a moving video of that moment on Instagram. It has since been shared far and wide on Israeli social media.

The video shows young Roy gently opening a white box — a gift for his 8th birthday. Inside is what appears to be a dachshund puppy, tail wagging. “Oh my god,” he exclaims in Hebrew. “I got really frightened,” he says, after he opened the white box and realized the present inside was alive.

Roy hesitantly touches the puppy, who has a purple bow around his neck, until a parent encourages him to pick the animal up.

As he cuddles the excited pet, his face turns red and he starts tearing up. “We love you so much, you deserve all the good in the world,” you can hear one of his parents say in the background.

“Thank you,” Roy says, his voice heavy with tears and emotion, as he puts the puppy down on the floor. “You’re the best parents in the world.” Cue: tears from us all. Literally, you can not watch this video with dry eyes.

Of course, a moving puppy video is enough to give us all the feels, but this video has way more behind it than the uninformed viewer might imagine.

You see, three years ago, Roy tragically lost his father, Amir Fryszer Guttman, who was a member of a popular Israeli boyband, Hfive; a choreographer; and a theater director.

Amir, an LGBT activist, came out of the closet in 2007, and married his husband and Roy’s father, Yanai Fryszer, in 2009 — it was one of the first high-profile same-sex LGBT weddings in Israel. After the wedding, the couple took each other’s last names. In February of 2013, the couple had Roy via surrogate.

In 2016, Amir was diagnosed with cancer, from which he recovered. In a video in which Amir returns from medical treatment abroad, you can see young Roy greeting him in the airport, and wiping away his dad’s emotional tears. “We’ll go to the beach together,” Amir tells his young son while hugging him.

A year later, in the summer of 2017, Amir was at the beach, celebrating a year of recovery from the disease. The beach was one of his favorite places — Amir was a former professional swimmer and he swam every day. But this particular beach did not have a lifeguard, and as Amir went into the water with a friend and his niece, the three got carried away. After Amir managed to save his niece, he lost consciousness and never recovered. He was pronounced dead the following day.

Yanai remembered telling Roy about the death of his father as he was giving him a bath: “So I told him that they took him to the hospital, and the doctors did all they could, but they couldn’t save Dad. And that Dad has passed away, Dad is dead. I didn’t have to explain anything more. At that same moment, he just cried up to the sky. I will never forget that.”

That loss has marked the family’s lives since then. Roy has been raised with his music and memories (much of Amir’s last year was recorded in the Israeli reality series Mehubarim, including many adorable scenes of Roy and his father).

But things have been looking up for the family lately — for the past two years, Yanai has been in a relationship with lawyer Peleg Levy, who now lives with the family and helps parent young Roy. You hear both of their voices in the adorable puppy video, lovingly encouraging the 8-year-old.

Happy belated birthday to Roy! We wish him all the joy in the world.