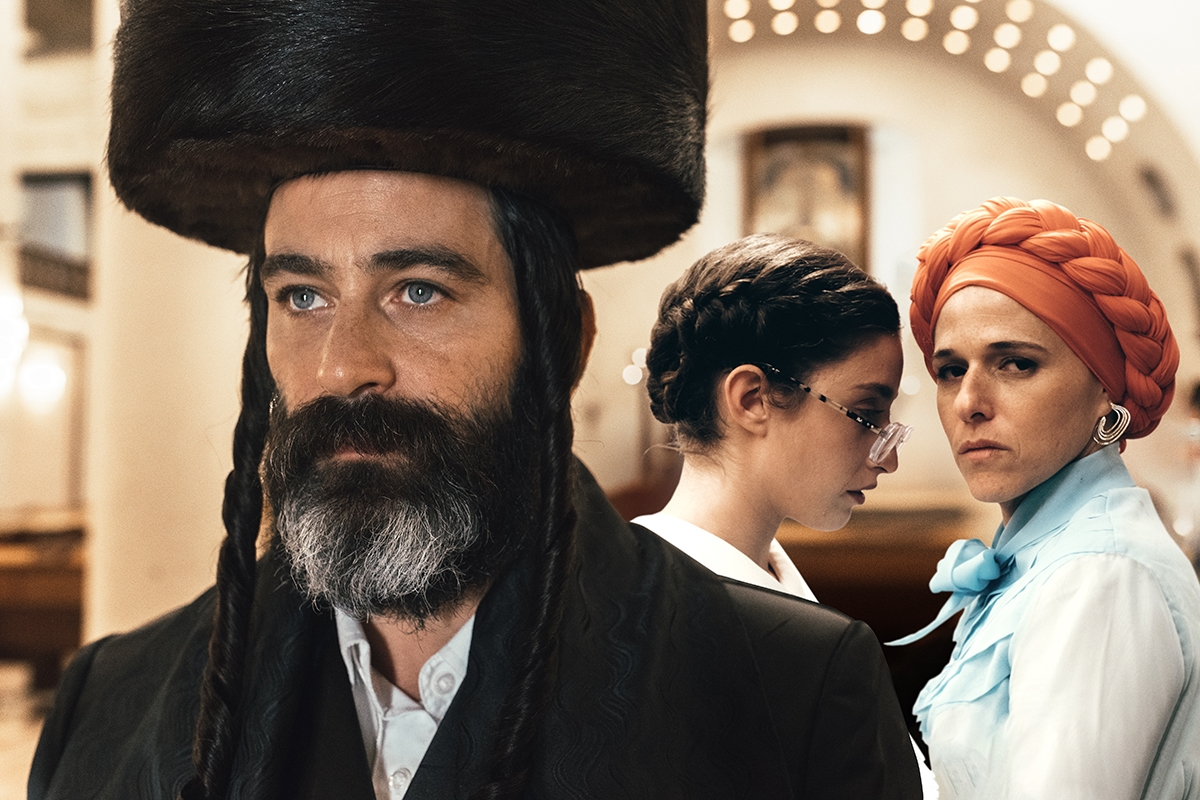 There’s absolutely no show that I’ve been jonesing for more than “Fire Dance.” The Israeli series from Yes Studio tells the story of 18-year-old Feigie, who lives in a tight-knit ultra-Orthodox Jewish community. The first international trailer was finally released this week, ahead of it vying for best series in the Series Mania TV competition in France.

First of all, this show is directed by Rama Burshtein-Shai. If you haven’t watched her movies “Fill the Void” and “The Wedding Plan” yet, you are absolutely missing out, because the Orthodox Jewish director tells female-centric stories about Orthodox Jewish women where religion is not the source of conflict. Instead, they’re touching, heartfelt stories about love and grief and passion that leave their viewers entranced and breathless.

“Fire Dance” will be Burshtein-Shai’s TV debut, and the prospect of eight episodes directed by one of the best film directors to have come out of Israel is absolutely irresistible. But it’s not just Burshtein-Shai that makes this show so exciting; it’s the cast.

The show stars Yehuda Levi, an Israeli powerhouse, as Nathan, a rabbi who runs a sewing workshop. Nathan is the object of Feigie’s forbidden affections, a 35-year-old married man who takes her under his wing after a suicide attempt. He brings her into his home to help with the housework, as his wife is pregnant with their second child almost two decades after giving birth to their eldest son, Shalom. Nathan, whose father, the religious head of the community, recently passed away, is also a controversial figure as a bit of a guru among female followers — a “women’s rabbi.”

Levi is perfect for the role, not just because of his incredible acting chops, but because of his decades-long status as the ultimate Israeli heartthrob (I mean, seriously, look at those blue eyes). One of Levi’s first roles was a guest spot in the iconic Israeli soap “Ramat Aviv Gimel” in 1996. But his biggest breakthrough was in the dreamy and tragic gay army drama “Yossi and Jagger.” He’s acted in countless soaps, starred in many a fashion campaign and he even previously played a rabbi in the Avi Nesher movie “Wonders.”

Levi has reached such mythical status in Israel that his roles in recent years directly address how iconic he is — he starred as a slightly fictionalized version of himself in the show “Very Important Person,” as a famous actor trying to rejigger his career following a break-up (Levi has been in several high profile relationships). He even guest starred as himself in the Orthodox comedy Israeli “The New Black,” as an actor researching a religious role (so, so meta).

Then there’s Noah Koler, who plays Feigie’s temperamental mom, Rayzee. Koler is an absolute Israeli powerhouse. She’s the creator and the star of the Israeli show “Stage Crush” and the hilarious star of the Israeli supermarket comedy “Checkout.” She’s been part of too many incredible Israeli TV shows and plays to name, from comedies to dramas — including the recent “Possessions” and “Our Boys” which are both available on HBO — and every time, she’s absolutely magnetic.

This isn’t Koler’s first collaboration with Burshtein-Shai, whom she recently called on Instagram the “love of my life.” She played the main character in “The Wedding Plan,” a woman looking to plan her own wedding despite the fact that she doesn’t have a groom — her winning charm and humor carried deftly. There’s absolutely no doubt that she’ll be just as phenomenal in this show.

The series also stars Naomi Levov, of the Israeli series “On the Spectrum,” and other exciting young Israeli stars, like Naya Beinstock and Ido Bartal.

Feigie is played by a promising new talent, Mia Ivrin, who looks enchanting and haunted in the first trailer for the show, which is oh-so-intense, full of drama, tension and longing. If I thought I was looking forward to this show before the trailer, after watching it, my anticipation feels absolutely impossible to contain. Please send help and also fans because whew, the steam.

“What do you do when you have no strength?” Feigie asks Nathan at the opening of the trailer, her face reddened with scratches, thick spectacles on her nose.

“I know how hard this is for you,” Nathan tells her, “but I need a promise, you don’t try to die.”

We also see Feigie’s mom trying to get her to marry “a young man from a great family.”

“Do I look like someone who is ready to get married? I’m messed up,” Feigie tells her mother. It’s clear how fraught and abusive their relationship is, with her mother later telling Feigie, “You’re nothing.”

We get glimpses into the sewing workshop and the draw Nathan has on his followers (“Meeting the rabbi can change lives, he saves souls,” Feigie says in the trailer), as well as the great conflict that his work with women brings to the community — “there will never be a women’s rabbi,” someone says in the trailer says. “There’s no such thing in our Torah”.

When Nathan is warned that meeting with these women is “like putting your head into the lion’s mouth,” he responds with an audacious, “You forget that I am the lion.” Um, roar?

I’ll be honest, on a personal note, I have trepidation about age gap relationships and forbidden love, but I have high hopes that Burshtein-Shai will deftly deal with these charged themes.

“’Fire Dance,’ through the talented creator, Rama Burshtein-Shai, gives us, the viewers, an honest and bold glance into one of the most intriguing and closed off ultra religious communities,” Sharon Levi, the new Managing Director of Yes Studios, said in a statement. “The series deals with an impossible love story from an authentic and honest point of view. Yes Studios is proud and excited to introduce this fascinating drama to international audiences.”

“Fire Dance” is set to premiere in Israel in the spring of 2022, and doesn’t have an international release yet. I don’t know where I will find the patience to wait for this show, but hopefully, it will all be worth it in the end.