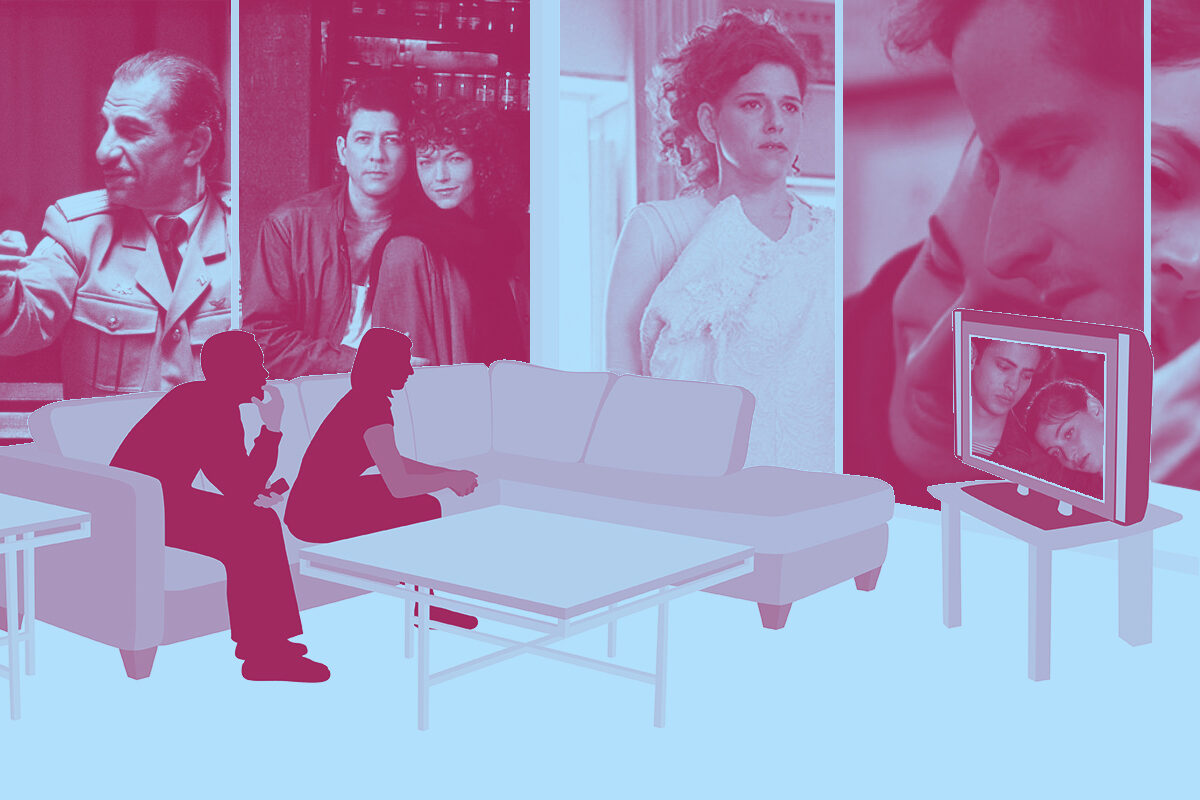 Editor’s note: This piece was originally written in August 2020, in honor of Tu B’Av, the Jewish day of love. This year, 2021, Tu B’Av begins on the evening of Friday, July 23. The following romantic movies are all still available on streaming services as described.

Date night? Who remembers what that even is? Movie theaters are still shuttered in much of the country. Many restaurants have reopened, sure, but going to them is still quite a daunting task, and even if you feel brave enough to do that, you have to tackle the hardest part: finding childcare. If that wasn’t a hard and expensive enough feat before the pandemic, it’s practically an impossible one now.

And so, most of us have taken our “romantic” evenings at home, trading a restaurant table for our couch or kitchen table; our TV or computer screens a substitute for a movie screen. The only problem is that, with so many streaming options, many of these indoor “date nights” just end up being an evening of endless scrolling through Netflix.

Fortunately, I’m here to make things a wee bit easier for you. Tu B’Av, the Jewish day of love, begins tonight — so why not make the most of it? With the end of this pandemic nowhere in sight, I’ve assembled a list of fun, romantic Jewish movies to watch during this love-filled day.

“Crossing Delancey” is the ultimate Jewish romantic movie, in my opinion. The 1988 film, about a successful single woman whose grandmother hires a matchmaker for her, has everything: pickles, empowerment, a Jewish matchmaker, a bris scene, a dreamy and actually nice “nice Jewish boy.” It also has the best line ever: “Let’s put bubbe to bed.”

Romantic? Yes! “Fiddler on the Roof” is ultimately Hodel’s and Tzeitel’s great love story. And if you miss seeing musical theater IRL, you can recreate the experience at home by watching the 1971 film adaptation of the movie starring Chaim Topol. It’s three whole hours long — you might need an intermission for this date night!

Gotta love some Babs and Mandy Patinkin for our date night! The Streisand-helmed musical sensation, based on an Isaac Bashevis Singer tale, is always fun to revisit, especially for scenes with young Patinkin.

Ben Stiller plays a hot rabbi in this classic ’90s movie about a love triangle between Stiller, a priest (yes, who is played by Edward Norton), and their high school crush, Anna, played by Jenna Elfman. Rabbi Jake’s love for Judaism is fun to watch — the caricature of an overbearing, over-the-top Jewish woman rabbi Jake gets set up with, played by Lisa Edelstein, is not so great — but she does bring some surprising comedic chops to this role.

“The Band’s Visit” is not strictly a romance movie, but it does have some romance and is a totally great date night movie. The popular film turned incredible Broadway musical is about an Egyptian band that travels to perform in the Israeli city of Petach Tikvah, and due to a mix-up, they end up stranded in the small town of Beit Hatikvah — where they form surprising connections with the local residents. It starts Sasson Gabai, whom you may know as Nuchem in “Shtisel,” and the amazing and fierce Ronit Elkabetz.

This charming romantic comedy from Israeli Orthodox director Rama Burshtein is a funny and heartening story of an Orthodox woman, played by the incredibly talented Noa Koller, whose husband-to-be leaves her before the wedding. Instead of canceling the wedding, she decides to keep the date and venue — and find a different husband instead.

Looking for a sensual indie romance? “Don’t Let the Night End” may be your fix. This film, directed by and starring Galia Barkol, is about an ambitious Israeli dancer whose career is stalled by injury. She escapes Tel Aviv and heads to Brooklyn — where she falls in love with the man whom she’s cat-sitting for. It’s quite lovely.

Yes, “The Goal” is a flawed movie, but it has one thing going for it: Gal Gadot! This 2014 film, originally translated as “Kicking Out Shoshana,” uses a somewhat common film trope — its main character is forced to fake coming out as gay, despite being straight. In this particular case, the star of the movie is Oshri Cohen, who plays Ami Shushan, a soccer player in Israeli’s notoriously macho soccer scene who falls in love with Mirit (Gadot). Mirit’s mafioso boyfriend forces Ami to come out — a move that he hopes will sabotage Ami’s team and his sports career —  but instead, Ami is embraced as a gay icon. While this movie has many cringey, non-PC moments, it’s also super campy and can make for a fun date night.

A semi-autobiographical movie by prolific Israeli director Avi Nesher, “The Matchmaker” is a comedy about a young boy who starts working for the local matchmaker, a Holocaust survivor, in 1968 Haifa. It’s a quirky and colorful coming-of-age tale.

“Longing” is a movie about missed love and obsession for things that are beyond your reach. The movie’s protagonist discovers that when he broke up with his girlfriend — 20 years before the events of the film — she was pregnant. He discovers the story of the life of his sons and his loves. It’s a poetic film about longing and missed opportunities, co-starring Neta Riskin, whom you may know as Gitti from “Shtisel.”

Again, this one isn’t a romantic comedy per se, though there is romance and comedy. It’s a really enjoyable and surprisingly sharp commentary about the Israeli Palestinian conflict, whose protagonist accidentally ends up working for a “Fauda“-like show that’s popular both in Israel and the Palestinian territories. Despite having no writing experience, he manages to snag a job penning scripts and stories for the popular program — and he has his loyalties tested when he tries to pen a controversial season finale.

Aaaah, this movie. It’s a gorgeous dream. If you’re looking for that Jane Austen feel, this is the movie for you. Rama Burshtein’s debut, starring Hadas Yaron as Shira, a young Orthodox woman whose sister tragically dies in childbirth, leaving her husband widowed. Shira delays her engagement to deal with the tragic loss of her sister — which ends up upending her love life dramatically.

The forbidden love between a Palestinian and Israeli person is a common trope in many Israeli movies. It’s also one that’s hard to do sensitively, so I’ve chosen not to really include them in this list. And while it is a trope in this movie, too, “A Borrowed Identity” is far more than that. Based on the semi-autobiographical Sayed Kashua novel “Dancing Arabs,” it’s about finding your identity and being stuck in between two worlds.

This Zionist love story, which takes place in Palestine in the ’40s as it becomes the state of Israel, is a love story between a young girl and a Palmach soldier. It’s based on the real story of Pnina Gary, an Israeli theater director, who originally conceived it as a play. The movie tells the story of the beginning of the state of Israel — as well as Gary’s love story with the son of Israel’s first prime minister. It stars Aviv Alush from the delightful “Beauty and the Baker.”

“Out in the Dark“ (Amazon Prime)

Yes, this is also a forbidden love story between a Palestinians and Israelis — this one starring everyone’s favorite “Shtisel” protagonist, Michael Aloni. Aloni plays a lawyer, Roy, who falls for Palestinian student Nimr. It’s a passionate love affair that has some painful consequences for Nimr, who can never fully fit in in either Palestinian or Israeli society.

A Palestinian man who lives in the Israeli city of Lod, known by some as the crime capital of Israel, works a desk job by day but dreams of becoming a successful rapper at night — and in that world, he finds romance with a fellow Palestinian rapper. It’s based on the real-life story of Palestinian rapper Tamer Nafar.