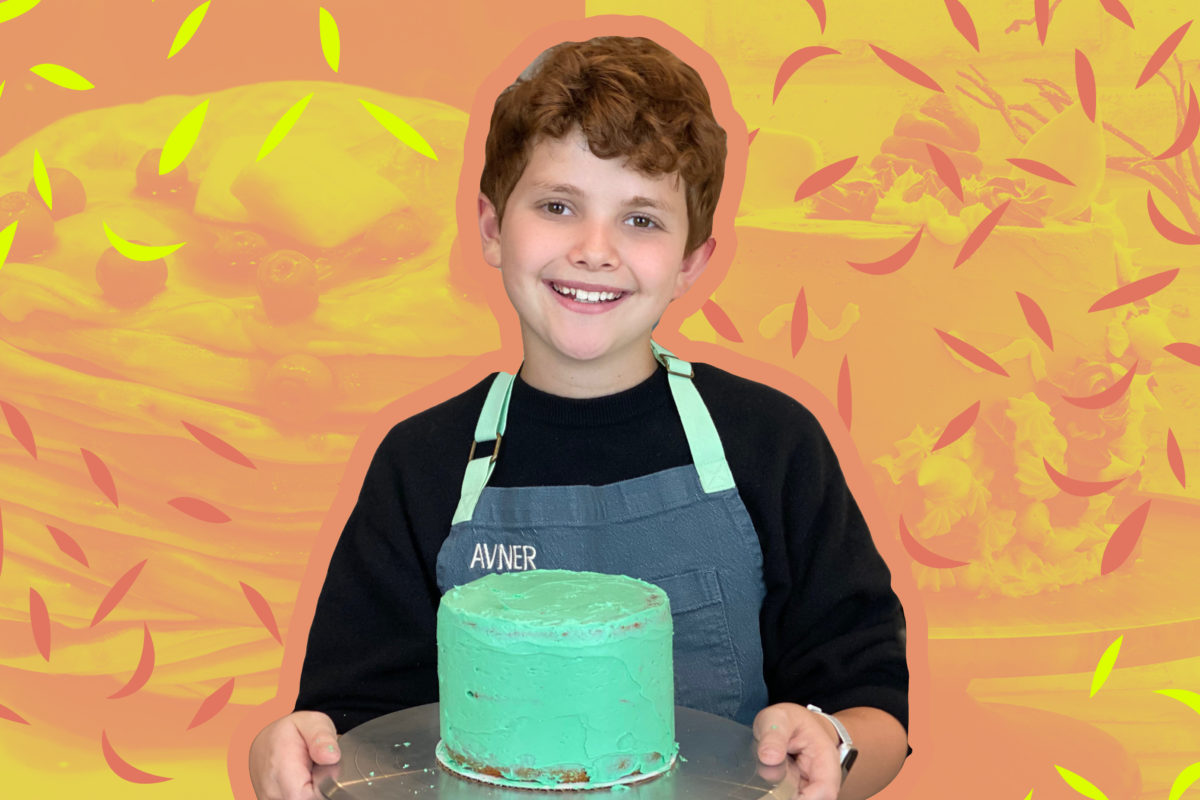 Avner Schwartz’s baking company is called Gingee Says, and honestly, that’s all it took for this incredible young Jewish baker to win me over. Gingee refers to the red curls atop the head of this super-talented 13-year-old baker. (Pronounced “jin-gee,” it derives from the word “ginger” and is a paticularly popular nickname in Israel.) Avner uses the adorable moniker to sell soaps, candles, and, of course, cakes.

Avner is now a contestant on the eighth season of the Food Network’s Kids Baking Championship, the adorable, hilarious, and mouthwatering kids’ baking competition hosted by Valerie Bertinelli and Duff Goldman (the Jewish baker extraordinaire behind Charm City Cakes). Avner, who lives in suburban Philadelphia, landed a spot on the show after he tagged Kids Baking Championship in a photo he posted on Instagram of his amazing (and literal) carrot cake.

Avner is now competing against other talented young bakers from across the country to win $25,000.

Spring has sprung! 🐰 Fresh carrots picked straight from the garden… just kidding, more like straight from the oven! 🥕 Carrot cake with cream cheese frosting, vanilla fondant and Oreo dust. Thanks @yolanda_gampp for the inspiration! Stay tuned for my YouTube channel to see a full tutorial…

“It was really amazing to meet all these cool kids who all love baking, all in the same room,” Avner says.

He tells Kveller just how impressed he was by the show’s kitchens: “It’s surreal!” he says.  “It’s a huge kitchen. It looks just like it does in the show.”

On his first episode of the show, Avner was tasked with making a chocolate shag cake. (On the off chance that term is new to you, that’s a ’70s-inspired cake with a shag textured buttercream frosting. YUM.) He cleverly added cold brewed coffee to make the flavor of the chocolate cake even richer (double YUM). His shag decoration was honestly one of the prettiest in the episode, with a colorful tie-dye pattern, and Avner, who finished his cake ahead of the other contenders, even took a moment to help fellow contestant Naima when her cake fell apart. What a mensch! 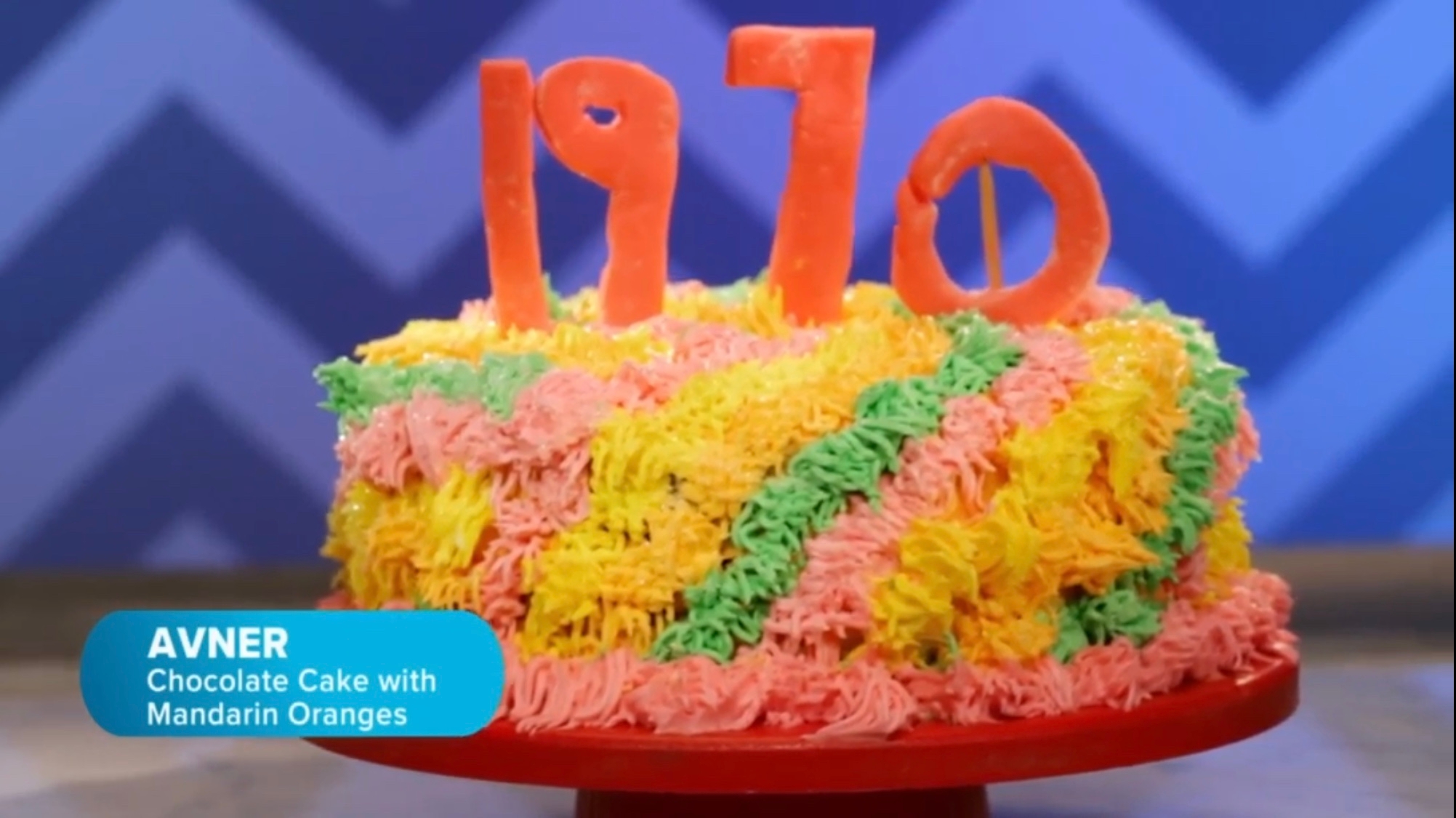 The kid’s got serious skills, so it’s no surprise that he started cooking at a young age — 4 years old, to be exact. “I started actually cooking with my mom, and we were making these meatballs,” he says.

He then advanced to baking, and nowadays, his favorite thing to make is a cake. “I like frosting cakes, I love looking at cakes, they’re so pretty,” he says.

When it comes to Jewish food, his favorite is “definitely challah,” he says.

“My mom has this famous challah recipe that I love. It’s sweeter than your average challah and I’m just obsessed with it,” he adds, adorably.

And while his busy school schedule doesn’t permit him to bake challah regularly for Shabbat, Avner did recently get to do a bunch of baking for his bar mitzvah’s mitzvah project. (Avner turned 13 this month, mazel tov!) He served freshly baked challah, oatmeal chocolate chip cookies, and apple cake (he got the recipe from a family cookbook) to Holocaust survivors at the JFCS – Barbara and Harvey Brodsky Enrichment Center, in honor of the 75th anniversary of the liberation of Auschwitz.

As it happens, Avner is no stranger to baking for a good cause. Last year, he baked 300 pink cupcakes for Philadelphia’s Butterfly Ball, an annual benefit for Living Beyond Breast Cancer, a nonprofit that supports those diagnosed with breast cancer, as well as  their caregivers. He said he got compliments for his work and learned a lot from turning his home into a cupcake factory for a week. And of course, it was for a good cause!

Avner also loves cooking for the Jewish holidays. “Last year me and my mom made these amazing latkes with duck fat in them — they were the best latkes I’ve ever had,” he tells me.

And last Passover, inspired by a photo on Instagram, Avner challenged himself to make 10 adorable cookies for each of the 10 plagues. After posting a picture of his inventive creations, the teen baker opened up himself up for orders. Soon, he was making 150 plague-themed cookies, he tells me. Then, he says, “My house became a 10 plague cookie factory.”

When it’s not Passover time, Avner takes orders for cakes, cookie dough and other baked goodies on his website. His most popular products, he says, are his homemade cookies ($15 per dozen) which come in delectable flavors like pumpkin spice and salted caramel. (And, in case you’re wondering, Avner and his mom came up with the business name, Gingee Says. She calls him Gingee, he says, and so does his grandmother and his friends.)

Avner also teaches baking to other children, so I asked him whether he has any advice for other kids who’d like to get into baking. “I love to watch YouTube,” he says. “It gives me so much inspiration, and a lot of the videos show what you can and can’t do.” His favorite YouTube shows, he says, are Rossana Pansino’s Nerdy Nummies and Yolanda Gampp’s How To Cake It.

We’re rooting for you, Avner! We can’t wait to what you do (and bake!) next.