What's the Deal With People Using Cohen as a First Name? – Kveller
Skip to Content Skip to Footer

What’s the Deal With People Using Cohen as a First Name? 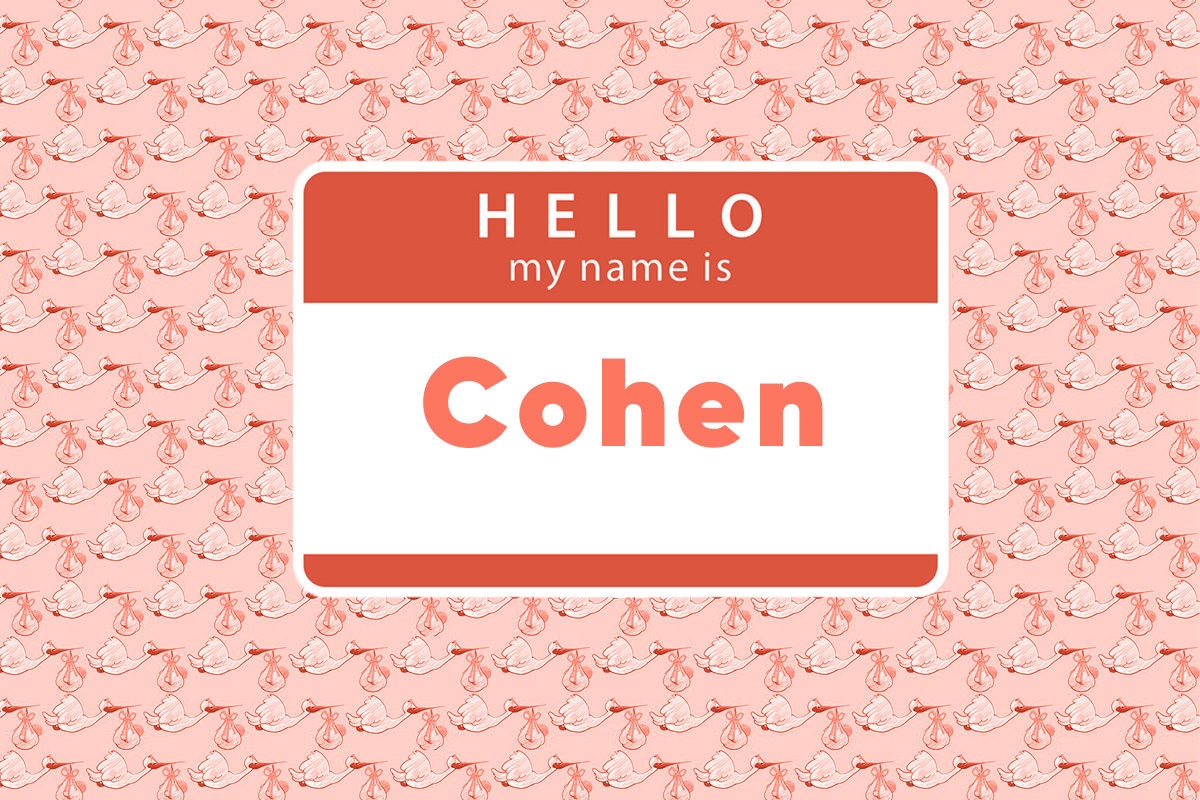 As a self-professed “name nerd,” I probably spend a bit too much time reading through name forums and articles about names, their meanings, and international trends. Both of my sons’ names were very carefully chosen and, admittedly, they each have three names (yes) largely due to this passion of mine.

If you’re Jewish, I’d wager there’s a 99.9 percent chance that you know the name as one of the most common Jewish last names, which refers to the priestly class back in the Temple days (also sometimes, historically, used by Jews who were not actually descendants from the priestly class). The debate I stumbled upon centered primarily as to whether it was offensive for parents to use Cohen as a surname for their baby, especially among non-Jews.

Before delving a bit more into the Cohen controversy, here’s a very brief summary of the recent usage of Cohen as a boy’s name in the United States. According to the Social Security Administration’s name database, Cohen ranked #652 in popularity as a first name in 2004. As of 2018, sits at #305 — which means that last year, Cohen was a more popular name than Spencer, Emanuel, or Seth! What’s more, the popularity of the name Cohen is also expected to increase… as is the name Messiah, which happens to be at #203.

So, what’s the deal with the name Cohen? It’s hard to precisely pin down the exact reason for its increasing popularity, but it fits into a few current American naming trends: the continued use of surnames as first names (think Jackson and Mason), as well as the popularity of boys’ names ending in “-en” (Aiden, Brayden, Jayden, and so on). It also experienced an uptick in usage after the show The O.C. premiered in 2003, which featured a character named Seth Cohen, who was known to many of his on-screen pals simply as Cohen. It seems that many parents using the name simply like how it sounds and have little to no idea of its meaning or usage. (And yes — I’m fully aware that the majority of people in the world don’t obsess or over-analyze names the way I personally do, so not everyone does research on names before they decide to use them for their children.)

Why might Cohen be a controversial name for first-name usage for Jews? Well, there’s a few factors at play. I asked on a few Jewish parenting forums, as well as some Jewish parent friends, for people’s thoughts and opinions about the name. Alisa, a Jewish parent from Ohio, remarked, “This is akin to naming a child ‘priest’ or ‘shaman’ or ‘holy man.’ I guess it is OK, if the people really understand what the name means, but also it feels somewhat appropriative.” (Cohen, unlike other globally popular Jewish names like Isaac or Levi, is a noun meaning “priest.”)

An anonymous parent in New York  — whose last name is Cohen — said in a Jewish parenting forum, “it’s ironic that people are going to use a name that makes me a potential target of discrimination or anti-Semitism as their child’s first name.” And Sarina from California added, “It is such an odd choice for a first name in general, but especially for a non-Jewish person.”

Some parents of children with the name Cohen — when asked if they had known about Cohen’s traditional use as a Jewish last name — said they didn’t see it as an issue because they didn’t really know many Jews. Perhaps not surprisingly, in these internet forums, that sort of sentiment made some Jewish parents feel uncomfortable. In a few instances, the discourse veered towards borderline anti-Semitic, with statements such as: “If Jews are offended by someone using it, they need to get over it, I don’t care if Jews are offended.”

But that’s not all when it comes to the Cohen conundrum! On various naming forums, it seems that some have chosen the name as a tribute to singer Leonard Cohen, who died in November 2016. In other instances I notices online, the baby’s family is Jewish, or has some Jewish ancestry and choose the name Cohen as a nod to their heritage. It also appears that a few parents were actually utilizing it as an Irish name, with an alternate spelling of Cowen or Cowan.

For the record, still other Jewish parents seemed to have no problem whatsoever with Cohen being used as a first name. Ashley from New York commented, “I don’t think this has anything to do with appropriation or an offensive attack on Jewish culture. It’s just a name!” An anonymous Jewish father from Maryland put forth that “my gut reaction is to think, ‘Huh, these parents didn’t even bother to Google the name first.’ But the name usage itself doesn’t bother me at all, though I find it a bit of a strange decision as a Jew.”

So is there a right or wrong answer in the quandary of Cohen being used as a first name for children? Just like with any other name, that answer is no! Discourse on cultural appropriation is undergoing a very rapid transformation, and naming trends, as always, come and go  — take so many of the names that fell out of favor from our grandparents’ generation, like Max or Rose, that have made such an incredible comeback in recent years that they’re probably on their way to being passe again.

Still, it will be fascinating to see how these young Cohens will grow up viewing their name in the coming years.  And if you happen to know — or have — a baby with the full name Cohen Cohen … well, that’s probably worth its own article.