When I Started Losing My Hair, I Embraced These Jewish Headscarves – Kveller
Skip to Content Skip to Footer

When I Started Losing My Hair, I Embraced These Jewish Headscarves 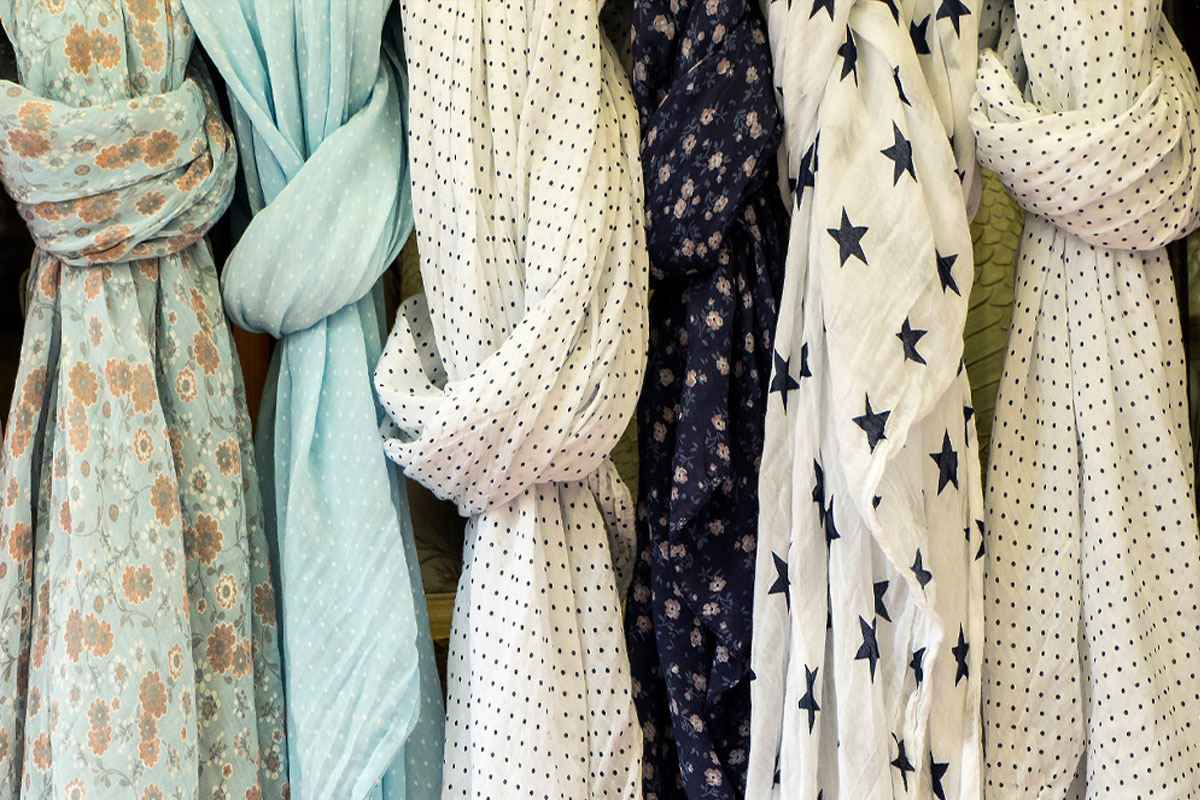 I used to have weird hair. It was a perpetually tangled mop of frizz and single-strand knots, completely under the influence of the weather, always unpredictable, generally untamable, and nothing like my childhood friends’ straight tresses that slipped effortlessly over their shoulders like strands of spun gold. My hair grew up and out, and my bangs were like a visor that, along with my coordinating giant monobrow, shielded my eyes from the sun.

My straight-haired mother tried her best. Maybe a cute pixie slicked down with Dippity-do and occasional spit. By age 9, I took over my own hair grooming, pinning the sides back with gold Goody barrettes in order to make it look less poofy. I still hated it. The color was all wrong: not the shiny black of my cousins who had perfect smooth curls, or the golden light brown of the Faberge commercials, that honey-wheat, sun-kissed meadow shade. It was somewhere in the middle, a medium mediocre brown.

My efforts to mainstream it devolved into torture. There were the box-dyes, the children’s relaxers for fine hair, all kinds of hair gels, mousses and pomades, highlighting caps with intricate circles that allowed me to fish out pieces to bleach, flat irons, round brushes, blow-dryers, and keratin treatments. Rarely, did I control it, and more often than not, I found myself in an ongoing cycle of wreck it-cut-it-grow-it-wreck-it-repeat.

By the time I reached my mid-40s, I was ready for a change. Also, there were options for people like me, overly specific shampoos and ridiculously expensive individual-curl haircuts. I got the dead ends removed and my spirals sprung to life as if they had been dragged down by expectations their entire existence and were finally free. As my hair grew, it became something I never anticipated: beautiful. I learned what it needed to thrive in its naturally curly state. I started writing about textured hair, and met other curlies who were finally embracing their hair after decades of destroying it.

Then it started falling out.

I was nearing menopause, and had endured a particularly difficult year. I saw a dermatologist who diagnosed me with Androgenic Alopecia based on my age, a speedy visual inspection, and family history. I was told to use Minoxidil and sent on my way. I quickly learned that less than half of all users of this medication respond to it. It didn’t work for me, and it would be several years before I found out why.

My hair loss has been violent, dramatic and heart-wrenching. I’ve slathered my scalp in snake oil. I’ve stood in front of the mirror and yelled, “I want my hair back!”. I’ve heard stupid, insensitive things from other women about how they have too much hair. I’ve told myself it doesn’t matter. I’ve strategically parted my meager strands to cover the bald spots. I’ve gone to subsequent doctors.

I recently, finally, was given a scalp biopsy which revealed that I was misdiagnosed. I have a diffuse form of Alopecia Areata. Unlike my initial diagnosis, which is caused by a sensitivity to the hormone dihydrotestosterone (DHT), Alopecia Areata is an autoimmune disorder. Steroids or immunosuppressive drugs are often used to reduce the inflammation around my hair follicles. I was prescribed a steroid foam which I carefully apply with a cotton swab every night.

In the last two years, I have tried several wigs to cover my hair loss. The irony is that I can now have that straight bronde hair of my childhood dreams (well, with a lace front and mono part). But now I don’t want it. I want fake hair to match my own natural texture, and I want it without the chunky highlights and shadow root. I want a fuzzy layer of frizz, and for one curl to go this way and the next to go that way, and maybe a few silver strands sparkling throughout. I want that hair that predicts the rain and then swells to protect me from it. Really, I want the old me back. That me had wild, relentless, feral, stubborn curls.

My other struggle with wigs is that they irritate my inflamed and sensitive scalp, and I can only stand to wear them for an hour or two at a time. Hoping to improve my comfort, I tried various caps, wig grips, sizes and materials without success.

Then I finally considered a tichel, a headscarf traditionally worn by married Orthodox women. I had never worn one before. Women in the Reconstructionist shul where I am now a member generally do not cover their hair with tichels, nor do I see tichels worn frequently within the larger Jewish community in the city where I live. I had no idea how to properly wear one without it sliding around. I also feared it would make me look dowdy, my balding would be made more obvious, and I would just stand out in general.

I suppose I could have gone to a kosher wig store for assistance with wrapping, but I was embarrassed about my hair loss, so I turned to YouTube for inspiration instead. There I found Rivka Malkah Perlman’s instructional videos on how to select, combine, and tie tichels. As an Orthodox Jewish woman, she observes the rules of tzniut, or modesty, which I do not. But her enthusiasm for layering and twisting tichels into magnificent headcovers is truly an art. In some videos, she shows new brides how to cover their hair, a beautiful cultural tradition passed from woman to woman.

While I haven’t created anything complex, my tichels are a very practical solution to my hair covering needs. They help me through the many ups and downs on my alopecia journey. And my fears of wearing them were completely unfounded. To be honest, the only person who has ever commented is my non-Jewish husband. He tells me I look beautiful.

Although I may feel like I am crumbling into dust hair-first, I’m trying to be optimistic about my new (and now appropriate) treatment regimen. In the meantime, the centuries of tradition woven in one little cloth help me hold onto my identity as a Jewish woman.