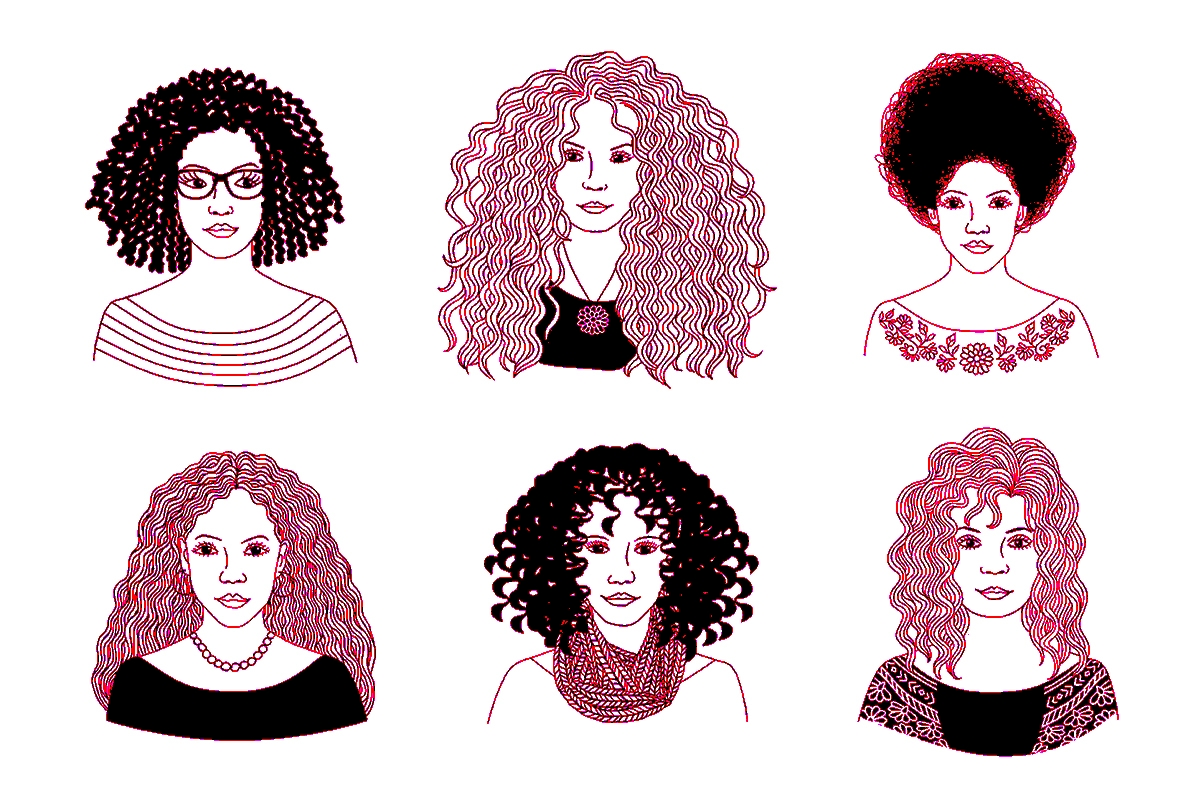 As a white, Ashkenazi Jewish girl growing up in the ’80s and ’90s on Long Island, straight hair was always the goal. Unfortunately, it was always just slightly out of reach.

Of course, in my suburb, there was no shortage of salons offering blowouts as well as semi-permanent to permanent chemical straightening — all of varying and questionable levels of safety. There were also countless, expensive at-home contraptions promising to transform naturally curly hair into a glossy, swingy, run-your-fingers-through-it mane.

And while I tried many of these options (although stopped short of chemicals), to my dismay, my very thick hair seemed to get curlier as I got older, transforming from subtle waves to a coarser, frizzier texture in middle school. Starting in 7th grade, I woke up at 6:11am (yes, I remember the minute) to spend an hour blow drying it straight every single day. Without the benefit of YouTube beauty tutorials or Instagram influencers, I had no idea that this regimen was counterproductive: My daily blowout was frying my hair. And yet, my fellow curly-haired friends and I — we were all Jews, though of course not all my Jewish friends had curly hair — would obsessively monitor humidity and precipitation levels every day, so as to prepare against what would inevitably be the atmospheric undoing of our extensive, hair-straightening efforts.

I suppose I always understood that straight hair was associated with a particular form of country club whiteness. My theory was reinforced when my family moved, when I was halfway through high school, to a preppy suburb north of Boston, complete with an actual prep school campus anchoring the picturesque downtown. There, as one of a much smaller group of Jewish students, my curly hair — which, until that point was merely one curly head in a crowd of many — became an object of utter fascination.

By this stage in my hair journey, thanks to the encouragement of curly-haired bunkmates at my Jewish summer camp, I had finally learned to embrace my hair’s tendencies and had adopted a curl-positive hair regime. In my new patrician environs, however, where the look de rigueur was a blonde high ponytail cinched with a perfect pastel grosgrain bow, my curly hair drew well-meaning but uncomfortable reactions. Strangers would touch my hair in public places, pulling on my curls to see them bounce back. Friends’ parents would remark with surprise that my hair was so “ethnic.” (I assume that sentence, in their head, ended with, “for a white person.”) The coup de grace was when I was voted “best hair” for the senior yearbook, which I took as less of a compliment and more of a winking recognition that my hair was, well, different. (It wasn’t totally lost on me that my co-awardee in the best hair category was one of the very few Black students in our class, who wore his hair in a proud Afro.)

I continued to wear my hair curly throughout college. By my mid-20s, however, as a young lawyer, I chopped my hair off, seeking a more grown-up and androgynous look. I made no effort to encourage my curls, nor did I attempt to straighten them. This latest act of defiance was an effort to reject the feminine ideals of long hair entirely, and I stopped thinking much about curly hair at all.

This all changed dramatically about 10 years later, in 2019. Through my job as a civil rights government lawyer, I was part of a multi-racial group of coworkers drafting a policy document for New York City that would explicitly clarify that discrimination on the basis of natural hair — specifically, hairstyles most commonly associated with Black people — is unlawful race discrimination under local law.

As we worked on the policy document, friends and colleagues shared personal stories about being forced to straighten or chemically alter their natural hair to appear more “professional” —  an experience all too common among Black women. And hair discrimination is not limited to the workplace; heartbreaking stories were cropping up in schools, too. Students were being told they can’t participate in school sports, go to prom, walk in graduation, or even start the school year with their peers because of their hair.

These children, in most circumstances, were turned away because their school’s grooming standards explicitly prohibited Black hair styles, or because certain “neutral” grooming standards were applied unequally to Black students. Regardless of the details, these grooming standards exist in the first place because we have, as a society, internalized what the ideal student, and the ideal worker, should look, sound, and dress like — and that is white.

Fortunately, formal recognition of hair discrimination as a civil rights issue seemed to be swift; after my office published its policy in February 2019, two dozen cities and states passed laws doing the same. In 2020, the House of Representatives passed a federal ban on hair discrimination and it was introduced in the Senate.

This movement to recognize hair discrimination didn’t originate at my government agency — it is the result of years of tireless efforts of Black natural hair advocates, legal scholars, documentarians, beauty experts, and others who demanded recognition and celebration of Black natural hair and Black hairstyles. (The natural hair movement has an incredible history and I encourage you to read more about it here.)

Of course, my experience as a white curly-haired Jewish woman is nothing like that of so many Black people, including, of course, Black Jews and biracial Jews. For example, I never feared being suspended from school or losing a job because of my hair texture. Nonetheless, when I was young, I spent so much time, energy, and money to conform — and then, when I chose not to, I felt like I needed to explain my decision to keep my hair in its natural state. But the natural hair movement — which has been bolstered considerably in recent years, on platforms like YouTube and Instagram —  has helped empower me to celebrate my curly texture again.

This is important because it isn’t just about personal style — it’s about changing attitudes and combating oppressive standards of beauty and professionalism for future generations. In addition to being a lawyer, I’m a mom of two: a 4-year old with mythically stick-straight hair, and a 2.5-year old with a cacophony of curls. My toddler often refuses to let me pull her hair up, and when it’s “down” it goes in all directions, framing her face with a halo of tight ringlets and adorable frizz.

I am working hard to have her embrace her curls. So much so that she’s started to introduce herself by saying: “My name is Frida. I have curly hair.” I have no doubt that the natural hair movement has given us curly-haired white folks greater permission and confidence to embrace our curls and diverge from white, Eurocentric norms of beauty.

Inspired by my daughter, 13 years after I chopped off my own curls, I’m growing them out again. I’m extremely grateful to the natural hair movement for celebrating curly hair textures, encouraging me to celebrate my curly texture; and for inspiring me to model curl-positivity for my toddler, to learn to embrace one’s own authentic and unique beauty, and to reject the Eurocentric restrictive norms of the past. And these are the lessons I hope we can all instill in our children, one ringlet at a time.