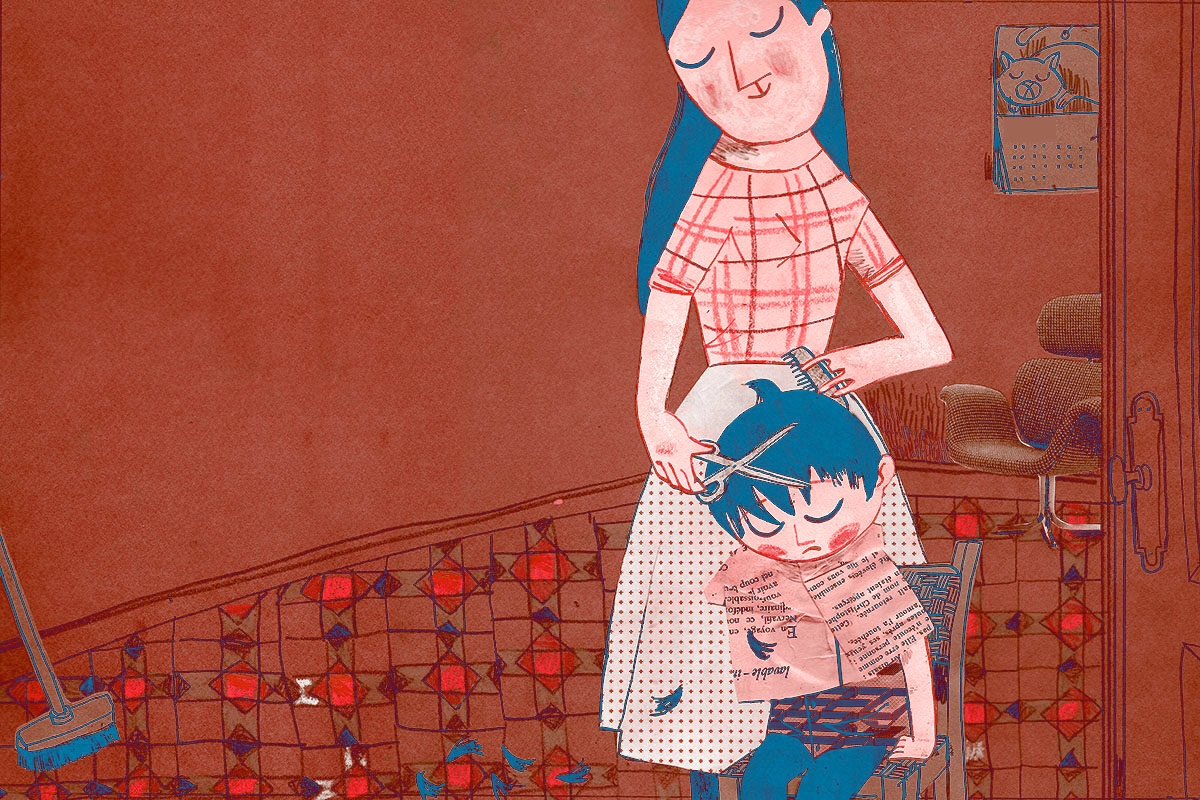 “I think Judah lost some of his manners when he lost his hair,” my 5-year-old daughter, JoJo, commented a few days after her little brother, Judah, had his Jewish ritual haircutting ceremony, known as an upshern. She reflected on how, since Judah’s first haircut, he was using more potty talk, being more aggressive, and calling her names.

I thought about this comment and realized that perhaps she was right — I had noticed him doing these things more since we cut his hair. Later that evening, I brought up this idea with my husband, Jason. He disagreed, stating that Judah had been doing all of these behaviors for a while, and perhaps I had just missed them until this moment.

One of my favorite job responsibilities as a rabbi is officiating life cycle ceremonies. The language I usually use to describe these rituals to families is that the ceremony elevates the moment — we take something that could be otherwise mundane and transform it into something sacred.

But the wisdom of both my husband and my daughter inspired me to think about rituals in a new way. Instead of viewing ritual as a vehicle to creating sacredness, I began to think about how the sacred was already present —  I just needed the ritual to open my eyes to it.

In this case, Judah had already been growing up, of course. Every single day, he moved a little more away from babyhood and transitioned more into boyhood. And yet, too caught up in the day to day, I had overlooked this sacred passage. But when we took the time to ritually cut his hair, I started to see this holy transition.

The word upshern means “to shear off,” and it is a Jewish tradition dating to the 17th century, primarily among Hasidic Jews. In most Hasidic communities, a young boy’s hair is not cut until the age of 3, a tradition attributed to Leviticus 19:23, which teaches that one should not eat fruit from a tree until a tree has grown for three years. Since people are compared to trees in the Torah, the idea is to wait until 3 years of age before cutting a child’s hair.

There is some variation among different Hasidic communities in terms of the age of the ceremony and how it is celebrated — customs range from a ranging from a quiet, private affair at home to a public celebration. Many times, the ceremony is connected to the child beginning to wear a kippah and tzitzit, as well as beginning his Jewish education.

More recently, the upshern has been adopted by Jews outside of the Hasidic world, like my family. Though this tradition was originally intended only for little boys, we waited until my daughter was 3 years old to cut her hair, too. (And, truth be told, we actually cut my son’s hair prior to his third birthday because he was getting eye infections from his hair falling into his eyes.)

Though Jason may have been more aware of Judah’s growth — and therefore, perhaps, didn’t need the ritual in the same way I did — Jewish sources indicate that at least I’m in good company when it comes to being oblivious to being surrounded by sacred moments. For example, in Genesis 28:16, the patriarch, Jacob, awakens from a dream in which he is visited by the God, and declares, “Surely the Divine was in this place and I did not know it!”

Similarly, Moses, when he approached the burning bush, was told by the Divine to take off his shoes, for he was standing on holy ground — something Moses did not appear to be aware of before receiving this memo. One of the blessings of the morning service praises the Divine for opening the eyes of the blind. Judah’s upshern helped me realize how life cycle rituals are one of the tools that allow the Divine to open our eyes to sacred moments we may have otherwise missed.

Another, perhaps more mainstream, example to illustrate this idea is a Jewish wedding. According to the Talmud, a Jewish wedding requires the presence of a minyan, 10 people, in order to recite the sheva brachot, the seven blessings for marriage.  Beginning with our sages thousands of years ago, there was an insistence on having community present at a wedding. I would argue that one critical component of having loved ones at a wedding is to open their eyes to the sacred nature of the relationship being sanctified.

As a rabbi, almost all of the wedding couples I work with have been together for years. Most already live together; many have seen each other through life-threatening illnesses or the deaths of family members; some even already have children together.  Yet something shifts for those who witness a couple standing together under the chuppah, from seeing the relationship as one of a committed couple to that of a sacred union. This relationship was already sacred, of course, yet the ritual allowed all of the loved ones present to see that reality. For those beloveds who make the choice to elope or marry through common law, often family members and friends struggle seeing the couple in a new light, since they were not there to witness the ritual transformation.

One of the many fabulous things about rituals is that they can be relatively simple, and Judaism has so many amazing templates from which to draw. Returning to Judah’s upshern: I had hoped to craft the perfect ceremony, by asking friends and colleagues for ceremony templates, and, perhaps, even writing some of my own liturgy and then celebrating with a large group of friends and family. But then Covid-19 happened, and not only did we lose the possibility of bringing together a large group, I also lost the free time to plan the ceremony thanks to the our new work-from-home, school-from-home reality.

What the ceremony ended up comprising were simple things I could easily access: a blessing over haircutting from ritualwell.org; the Priestly Blessing, an ancient prayer found in the book of Numbers that asks for the protection and light of the Divine; Shechechyanu, a gratitude blessing for having reached a specific moment; singing “Simon Tov u’Mazel Tov;” a celebratory song; and a festive “meal” consisting of cupcakes with pink frosting, Judah’s favorite.

Though I can’t be certain, I would like to think this ritual would have been just as eye-opening if we simply marked this important “first” by just saying the Shechechyanu and eating pink cupcakes. After all, ritual is less about the precise words recited and more about the intention of the moment, allowing us to have our eyes opened to the sacred, which is all around us. Baruch atah Adonai Pokayach Evrim, Blessed is the Holy One who opens the eyes of those who do not see.