Yes, Jewish Identity and Mental Health Struggles Are Suitable Topics for a YA Romance – Kveller
Skip to Content Skip to Footer

Yes, Jewish Identity and Mental Health Struggles Are Suitable Topics for a YA Romance 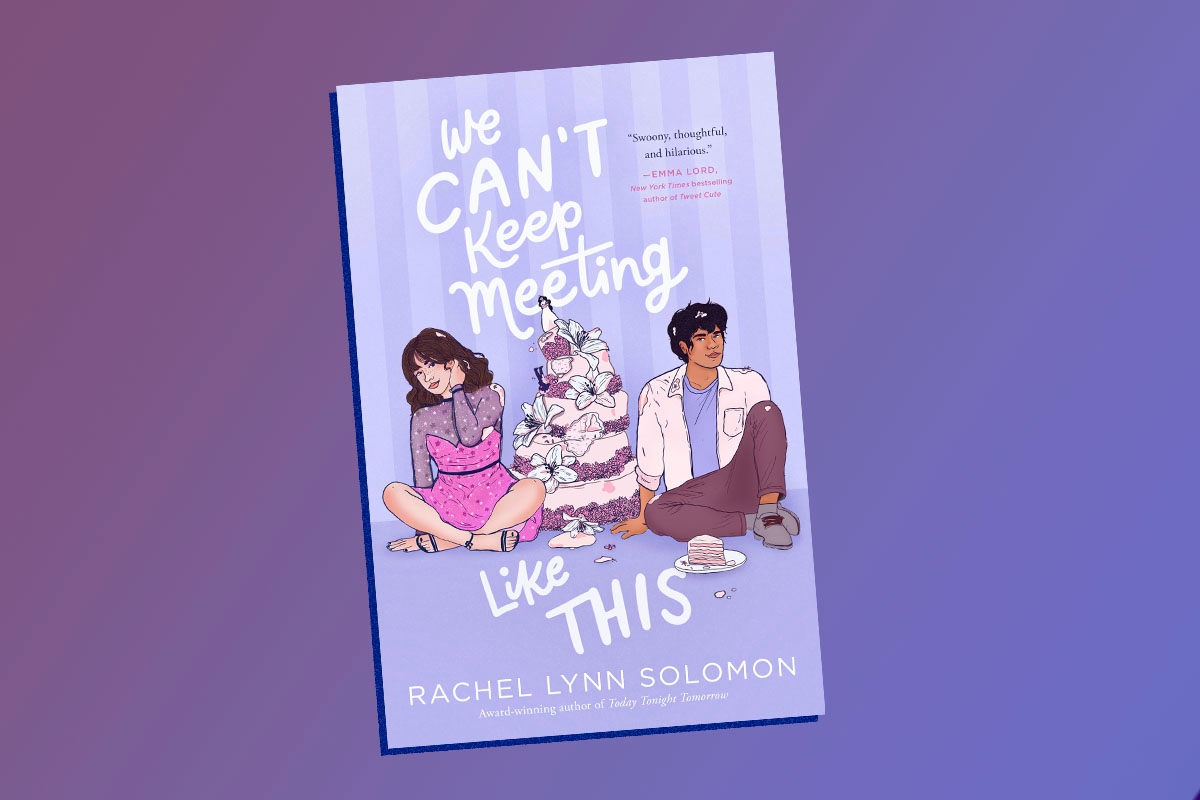 Rachel Lynn Solomon’s new YA novel, “We Can’t Keep Meeting Like This,” is a romantic comedy that takes place during a busy wedding season. In other words, it’s perfect for a summer read. The main character, Quinn Berkowitz, is a wedding harpist who works for her family’s wedding planning business, but she’s not sure she wants to join the family trade after college, as is expected of her.

Meanwhile, she’d like to avoid her former crush/friend, Tarek Mansour —  but that’s difficult when his parents are caterers who work with her parents. This book features boat rides on luxury yachts, grand romantic gestures, and plenty of cake, but it doesn’t shy away from serious topics, such as depression and OCD.

“I feel like it’s really important for teen readers, in particular, to see characters with mental illness, who are thriving and who have a healthy relationship with whatever’s going on in their brain, even if they’ve struggled with it in the past or even if they’re not 100% thrilled that they are this exact way every single day,” Solomon, 31, tells Kveller in a recent interview. “All of the characters that I’ve written so far are on medication, they’re in therapy, and, I think most importantly, they talk about it with other people, which is not something I was ever comfortable doing as a teen.”

The Seattle native and author of numerous novels, including “Today Tonight Tomorrow,” “Our Year of Maybe,” and “You’ll Miss Me When I’m Gone,” spoke to us about Jewish identity, writing sex positive female characters and more.

You always include Jewish characters in your books. Is that something you set out to do and why is that important to you?

It wasn’t something that I did until my first published book, which was not my first completed book. I had four books before that that were in various stages of going somewhere, but never quite made it. There was some core piece missing in those other books. I really think that writing Jewish characters helped me write more honestly and openly. And then, after the reception to my first book, and hearing from Jewish readers who were not used to seeing themselves in contemporary young adult novels — and [who were] really only used to seeing themselves in Holocaust books, for the most part, which is what I grew up reading, too —  I made a vow to myself that I would only write Jewish main characters going forward.

You mentioned reading Holocaust books. Growing up, were there any Jewish characters in books that you could relate to?

Aside from Holocaust books, I really cannot remember that many. I know there was the “All-of-a-Kind Family” series, which I didn’t read. I did read some Judy Blume, but I was probably too precocious for my own good in that I was reading books that were not appropriate for me at a very young age. The characters that I remember the most were secondary characters, and those were the love interest and the best friend in the Princess Diaries books.

My family was pretty secular. We were kind of High Holiday Jews. I also grew up in a place that didn’t have a big Jewish population, so I was used to being the only Jewish kid in my class.  I swear, every year in elementary school I had to go up in front of the class and tell them what Hanukkah was and, as a chronically shy kid, it was just the absolute worst thing.

I did start making more Jewish friends as I got older, but I still really lacked that Jewish community that a lot of people have been fortunate enough to grow up with. And it took me a while to find that. It wasn’t until college, when I started being part of Hillel and I actually took Hebrew classes in college — and then also as an adult, when I connected with other Jewish writers, that I found some of that community.

Are there other ways your Jewish identity inspires your work?

I think that all of my characters are trying to figure out what their Jewish identity means to them. All of them are almost trying to defend it to themselves, or maybe even to other people, in the sense of being “Jewish enough,” which is something that I struggled with growing up and as I met more religious Jews as an adult. And it’s also a way that my characters connect with other people, so I write a lot of Jewish main characters and then Jewish love interests or Jewish best friends. I have not written a book where there’s only one Jewish person in the book. We tend to find each other, so it just doesn’t make sense otherwise.

You’ve said that you wanted to write a character with OCD in a book that isn’t about OCD. Why is this important to you to portray, especially in a romantic comedy?

One of the reasons that I love writing romance is I feel like it gives us this really safe framework where we can explore some of these darker topics. I really take issue with anyone who would say that romantic comedies are only fluffy, light, and don’t deal with any dark topics. It’s very rare to meet someone who isn’t dealing with something difficult and, yes, romance is escapist, but I think it can still be escapist while incorporating some of those tougher real-life issues. It just makes it feel more relatable and realistic. I think a lot about realism and escapism in romance and trying to find a balance between the two of them. I think I’m often putting my characters in slightly unrealistic, wild situations, but giving them these relatable traits that ground them a bit more.

You often write Jewish love interests, but in this book, it’s an interfaith Jewish/Muslim relationship. Was something you consciously wanted to portray?

That was definitely intentional. And part of that comes from my own upbringing — I think I was fed a lot of harmful messaging about Jews and Muslims not really being able to be friends. I had a close Muslim friend in high school, and I remember asking my parents if it was OK that we were friends and I was so nervous about our parents meeting. I just didn’t realize that all of this stuff was completely manufactured and it took me longer than it should have to realize that that is not a thing, and that does not need to be a thing.

It was really important to me to show a casual relationship between not just a Jewish character and a Muslim character, but a Jewish family and a Muslim family where that’s just a complete nonissue. And I show varying degrees of faith in all my stories as well. This particular Muslim family was based a little bit on a friend in high school.

You’ve talked about how it’s important for you to have sex positive female characters. Is that something that you had when you were growing up?

No, and I really think so much of my writing is trying to combat all of this harsh and really negative messaging that I received as a teen. Every book that I read as a teen, if it had sex in it, it was 100% for the male character’s benefit. The girl usually did not want to be there, it really felt like. It’s another thing, kind of adding to that list of things that people were just kind of uncomfortable talking about, and that is definitely not the case today!

I really feel it’s so important for young women, especially, to see characters that feel confident and unashamed of experiencing desire, and are unafraid of asking for what they want in relationships, emotionally or physically. Obviously in adult [fiction] it gets a little steamier, but in my YA it’s definitely still age appropriate. It focuses more on the emotional connections even when there are physical connections happening on the page.

What books have you read lately that you’ve loved?

I would highly recommend both of Rosie Danan’s romance novels “The Roommate” and “The Intimacy Experiment” — “The Intimacy Experiment” has a rabbi love interest and it’s really wonderful. And then a book that is coming out this fall that I read a while ago and I’m just absolutely head over heels for is “The Charm Offensive” by Alison Cochrun and it basically asks the question what if the bachelor were gay and fell for his producer and it is just so much fun. Loved it.