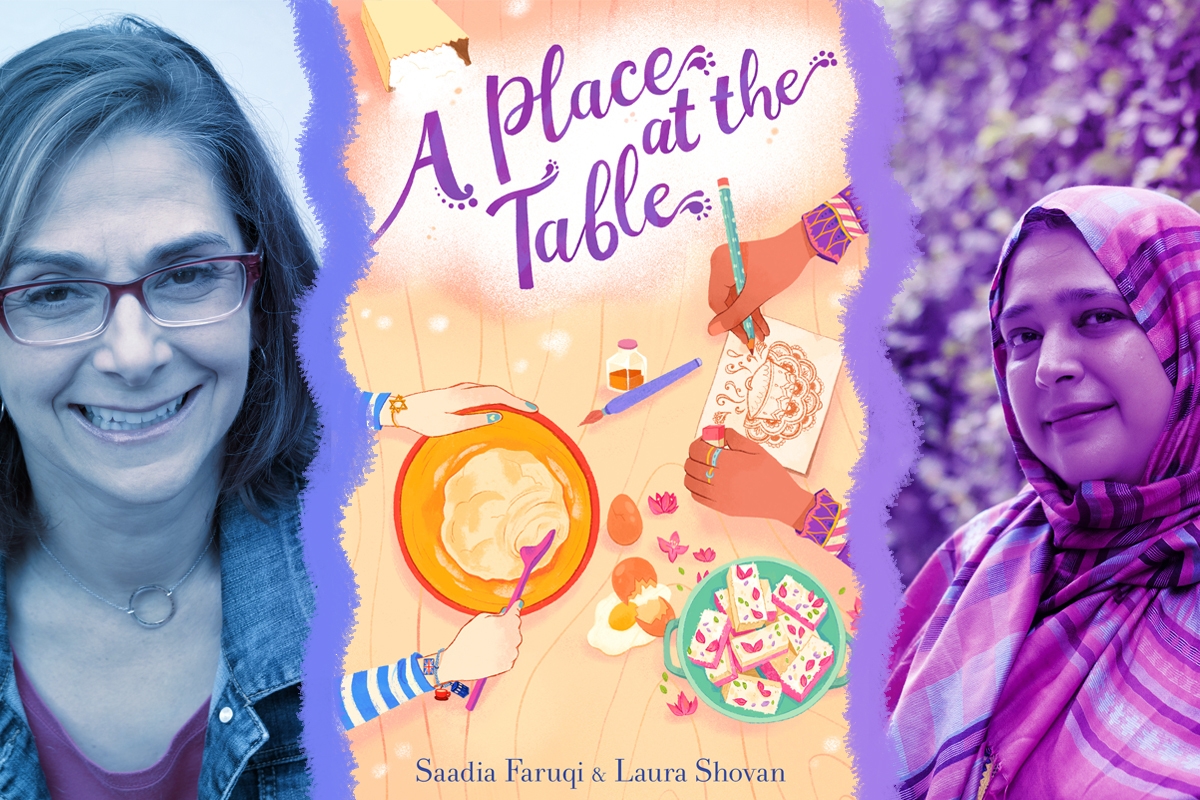 A Place at the Table tells the story of two middle school girls, Elizabeth and Sara — one Jewish and one Muslim — whose friendship begins in a South Asian cooking class taught by Sara’s mother. Elizabeth is a budding chef and Sara is the new kid in school. Both girls have mothers who are studying to become American citizens, and as the girls gravitate towards each other, they must learn to ask awkward questions, be open to honest answers, and be comfortable standing up for each other even at the expense of other relationships.

While, at times, it seems our country is struggling with deep divides that appear insurmountable, this delightful book teaches its readers that difference does not inherently mean discordance. What’s more, it provides a positive example for its readers on how to navigate the very differences that make us each and every person unique.

This timely middle-grade novel is co-written by Saadia Faruqi, an immigrant from Pakistan who has two kids, and Laura Shovan, who is also a mom of two and the daughter of a British immigrant. In a wide-ranging interview with Kveller, the authors discussed  parenting, allyship, identity, and more.

How did you decide to write this book together?

Laura: I had a loose idea for a middle-grade novel called Citizen Mom, about a girl who wanted to help her mother through the citizenship process. But I realized that my view of being first-generation American didn’t include the experience of someone not born in the U.S. Saadia was my first choice of authors to partner with on this story. Not only is she raising first-generation American kids, I admire her writing and activism. I pitched the idea to Saadia and we began to develop the characters and plot together.

Saadia: Writing stories about first-generation kids and the citizenship experience was important to me, especially since it’s my own story. I became a U.S. citizen in 2016, a few months before the presidential election that year. It was a milestone for me and my family in many ways.

Throughout the book, while grappling with the reality that there are those around her who are blatantly anti-Muslim, Sara herself exhibits some shame and embarrassment at being Muslim. Saadia, did you have a similar experience when you were her age?

Saadia: I grew up in Pakistan, where almost everyone was Muslim. I never felt out of place or attacked in any way. It was only when I came to the U.S. as an adult that I saw the world with different eyes. I saw racism, Islamophobia, xenophobia, and so much more all around me. I’m not saying it doesn’t exist elsewhere, but rather that I’d never been the brunt of it until then. Sara’s experiences in A Place at the Table are more reflective of my children’s lives than my own.

What are some ways that someone who is a minority can feel pride in their heritage without feeling alienated by it?

Laura: Sharing that heritage with friends or a community is important. Going to Hebrew school with a handful of school friends made me feel less alienated as a kid.

Saadia: As an author, I make myself available for many school visits throughout the year, in-person and virtual. This allows me to engage with my readers of all backgrounds, but in particular allows me to connect with readers who identify with me in terms of religion or culture. Muslim kids or immigrant kids can talk to me and feel a sense of pride, self-confidence, and happiness.

There’s an intense scene in the book when a character says something racist. But another character, Stephanie, steps in and says, “You can’t say stuff like that.” This really struck me — it’s hard to stick up to bullies, especially ones you are friends with. What advice you can give kids who are in a similar situation? How can they find the courage to do what Stephanie did?

Laura: The character of Stephanie is popular, well-liked, and has all of the privilege that comes with being of the dominant culture. Because Stephanie is a girl with social currency, she has the power to speak up and correct Elizabeth’s friend, Maddy. Without sharing any spoilers, it isn’t until Maddy begins to appreciate Sara’s mother — as a person, not a stereotype — that she begins to change.

Saadia: It’s definitely hard to stick up for someone against a bully, whether they’re a child or an adult. That’s one of the reasons we wrote this book: to offer a roadmap to readers about allyship. It’s really important in this day and age to not stand by quietly when something terrible is being said, because it escalates the situation and makes the bullying worse. My advice to kids is to talk about these issues with each other, have a plan about what you’re going to say, and tell adults when bullying is happening.

There are several occasions in the book in which well-meaning people say the wrong thing that ends up being insulting. How do you suggest kids address other kids, and even adults, in this kind of situation?

Saadia: I think we can get a little more educated about what is hurtful or not, and that comes through reading, asking questions, and learning from each other. It’s always OK to ask why something is offensive, as long as you do so in a respectful manner.

Laura: We tried to model handling these unintentional microaggressions in a number of scenes.

In today’s political climate, when xenophobia and antisemitism are on the rise, how do you suggest kids address their friends who parrot such beliefs from their own parents?

Laura: That’s a tough question. I had a friend in high school who, for religious reasons, believed I was going to hell. No matter how many conversations or arguments we had about it, he clung to that belief. So, I’d say that kids can be very clear that hateful rhetoric like antisemitism is not only wrong, it’s also personally harmful. But I’d also say that it’s OK for kids to put up a boundary there if the other person continues to use hate speech.

Saadia: I always suggest talking to your friends and explaining why something is harmful. If nothing else works, it may be time to remove yourself from a friendship. Sara and Elizabeth in the book offer a great way to do this tactfully in the way they treat Maddy.

What advice do you have for parents reading this who want to raise thoughtful, kind, and open-minded children?

Saadia: Parents should first have that mindset themselves. Read about the issues that affect the world today, and work on yourselves first. If you’re trying to be thoughtful and kind yourself, your children will follow your footsteps without any preaching. I make it a daily practice to talk with my kids about important topics. We watch the news together, discuss politics and social topics, and much more. This allows my children to learn about what’s important to me, and make up their minds about how they want to live their lives.

Laura: My best advice is to model being thoughtful, kind, and open-minded. But also to talk with your kids when you make a mistake and say or do something that’s hurtful to another person. Discuss what happened, how you attempted to fix it, and what you learned from the experience.