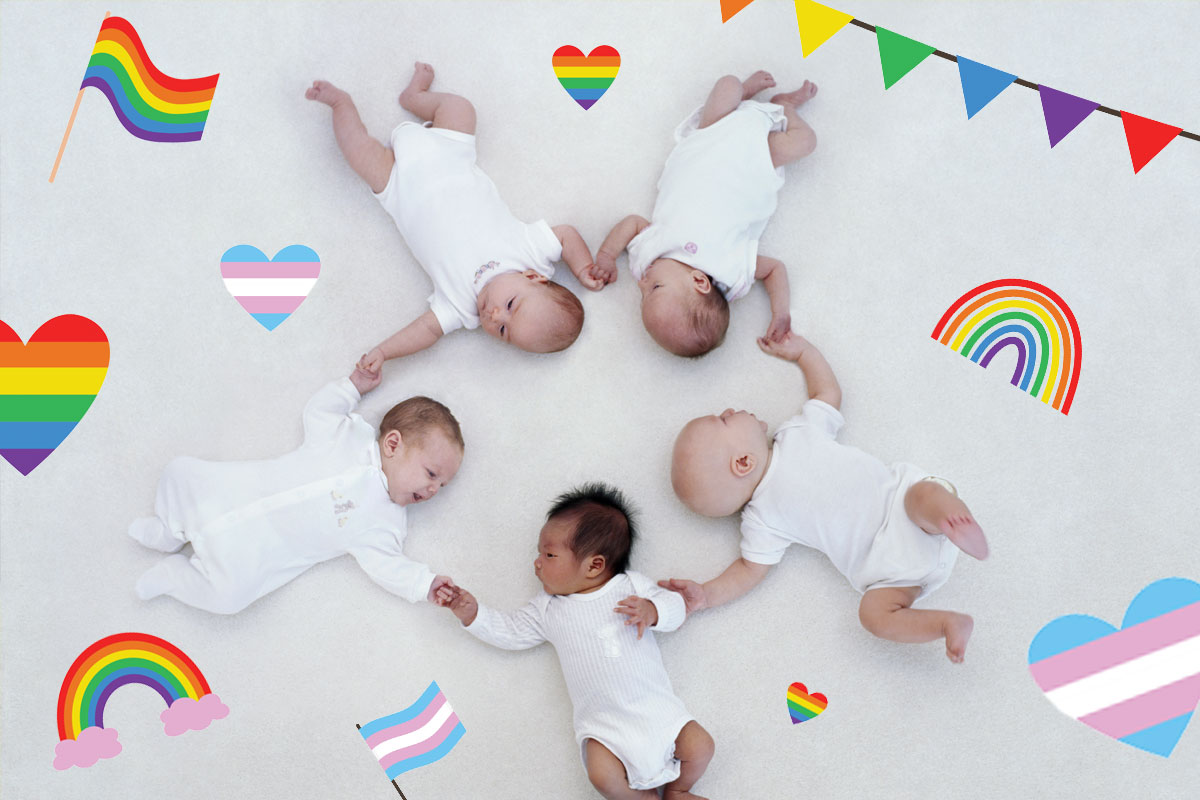 Motivated by the teaching of tikkun olam, or repairing the world, Jews have always been at the forefront of social justice movements. For example, look at the sheer number of queer Jewish activists who have pushed for LGTBQ+ rights. In the United States alone, the list of queer Jews include the first openly gay man elected to major public office, a bisexual activist whom some call “the mother of Pride” and a transgender reality TV star and author changing the way society views the trans community for the better.

So whether you’re starting a family with two moms, two dads, two non-binary parents, two allies or any combination thereof, one meaningful way to celebrate the work of LGBTQ+ mensches is by naming your baby after one of them.

Coincidentally, this action falls in line with multiple Jewish baby naming traditions. In the Sephardic tradition, naming a baby after either a deceased family member, a living one or just someone admirable is considered an honor. Meanwhile, the Ashkenazi tradition adheres to naming babies after someone who has passed.

Without further ado, here are 13 Jewish baby names which honor queer Jewish activists who moved, or are continuing to move, the LGBTQ+ rights movement forward.

Harvey Milk is an LGBTQ+ icon for Jews and non-Jews alike. The first openly gay man elected to major public office in the United States, he served on the San Francisco Board of Supervisors from January 1978 until November 1978. During that short time, he sponsored a bill that banned discrimination on the basis of sexual orientation in public accommodations, housing and employment, which was passed in March 1978. Tragically, he was assassinated in his office at the age of 48. Even so, his memory is both a blessing and a revolution. In his most famous speech, given during a Pride March, Milk spoke on the importance of queer visibility and representation, saying, “You have to give people hope.”

Known for his righteous anger, Larry Kramer was an activist and author best known for his work during the height of the AIDS crisis. In 1987, Larry co-founded ACT UP (the AIDS Coalition to Unleash Power), a grassroots political organization that still uses direct action to combat the AIDS crisis. At the time, and in the previous decade, Larry and other ACT UP members found that the United States government and medical establishment were negligent and complacent in their response to the extreme number of cases of HIV/AIDS in the country, particularly in the LGBTQ+ community. Thanks, in part, to the protests of ACT UP, stigma surrounding HIV/AIDS is far less prevalent, and antiretroviral treatments are now standard practice in treating HIV.

Meaning “earth” in Hebrew, the biblical Adam was the first man God created. In contemporary times, Adam Eli (he/they) is using social media and his own writing to make our Earth a better place for everyone. They are best known for founding Voices4, a nonviolent direct action activist group committed to advancing global queer liberation, and for their 2020 book “The New Queer Consciousness.” Queer Jewish singer Troye Sivan described the book as “the new manifesto for how we as queer people could and should navigate the world. It’s the holding hand I never had — but wish I did.”

If you’ve turned on a TV in the last seven years, you’ve probably heard of Jazz Jennings. The transgender activist gained notoriety in 2015 for her reality TV show on TLC called “I Am Jazz.” Yet somehow that accomplishment already seems to pale in comparison to the long list of other things she’s done. Namely, by age five Jazz had already come out as transgender. A few years later, the Jennings family (Jennings is actually a pseudonym for “a very Jewish, long last name”) founded TransKids Purple Rainbow Foundation. This amazing organization works to “enhance the lives of transgender and gender non-conforming youth and their families.” Additionally, in 2016, Jazz published a memoir called “Being Jazz: My Life as a (Transgender) Teen.” After taking some time off after graduating high school in 2019, Jazz is now set to attend Harvard for college!

Meaning “little bird” in Yiddish, Faygele is a beautiful name that works for any gender. It also honors the American activist Faygele Ben-Miriam. Ben-Miriam, who was born John F. Singer but later changed his name to honor his gay, Jewish identity, was part of one of the first same-sex couples to apply for a marriage license in the United States. He and fellow activist Paul Barwick did so in the state of Washington in 1971, when gay marriage was still illegal; funnily enough, their motive wasn’t actually to get married, but rather to make a point about having the same rights as heterosexuals. They were denied a license, which eventually led to a lawsuit. Though nothing came of it, Ben-Miriam is still remembered for spotlighting the issue of gay marriage. Other accomplishments include working with with the National Board of the New Jewish Agenda, the International Jewish Peace Union, the Jewish youth group Kadima — and producing the first gay country music album, “Lavender Country.”

Note: Faygele has historically been used as a slur against gay men, but in recent years queer Jews have reclaimed the term.

If disability activism is also near and dear to your heart, you might consider naming your child after Jewish-Chinese, dear and genderqueer activist Chella Man. He first gained notoriety around 2017 when his social media documentation of his transition went viral. Now, as an actor, model and artist, Chella has used his platform to discuss his identity. “There is an extreme lack of representation for young, Deaf, queer, Jewish, Asian, transgender artists…So, I decided to be my own representation,” he told Teen Vogue in 2018 after signing as IMG’s first Deaf Jewish-Asian model. In 2021, Chella published “Continuum,” a book in which he discusses his life.

The books “Stone Butch Blues” and “Transgender Warriors” are essential parts of the LGBTQ+ literary canon, and their author is none other than Jewish butch lesbian Leslie Feinberg. Through hir work, ze popularized the usage of the gender-neutral pronouns “ze/hir,” and used them hirself (in addition to she/her pronouns). Ze also described hirself as “an anti-racist white, working-class, secular Jewish, transgender, lesbian, female, revolutionary communist” and that’s just plain cool.

Naming your child Nitzan, a Hebrew name meaning “bud,” would honor Nitzan Horowitz, the first openly gay leader of an Israeli political party. Horowitz’s political career began in 2009 when he left his job as a journalist to become a candidate for the left-wing party Meretz. He won a seat in the Knesset that election, making him only the second openly gay member of the body. That year, he announced a plan to bring forward a bill that would legalize marriages or civil unions between two partners regardless of religion, ethnic background or gender; however, this never came to pass. In 2019, he became head of Meretz, but resigned his position in 2021 to become the Minister of Health in Naftali Bennett’s cabinet. Through this position, he was responsible for the circular which banned conversion therapy in Israel.

A Hebrew name meaning “praised,” Judith or Yehudit honors the biblical figure most well-known for beheading the invading general Holofernes. It’s a story that is extremely badass, as is the name’s queer Jewish namesake, Judith Butler. The philosopher and gender theorist is most well known for their writing, including the book “Gender Trouble,” which emphasizes the fact that gender is a performative social construct. These theories are now extremely influential in feminist and queer theory. Butler has also engaged in political activism, having served as on the board of the International Gay and Lesbian Human Rights Commission for a time.

Many remember activists Marsha P. Johnson and Sylvia Rivera as the driving forces behind Pride. As they should! However, another activist that deserves some recognition is bisexual Jewish activist Brenda Howard. In 1970, Brenda played a key role in organizing the first ever Gay Pride Week and the Christopher Street Liberation March, which would later be recognized as the first ever Pride parade. As an alternative to the name Brenda, this queer activist’s Hebrew name was Brana.

Over the last few years, transgender author and rabbi Abby Chava Stein has become a driving force in queer Jewish activism. Her 2019 memoir “Becoming Eve” chronicled her journey from growing up in an ultra-Orthodox community as a direct descendant of the founder of Hasidism to coming out in 2015 at age 20. Since coming out, she has worked closely with Footsteps, an organization which helps people leave ultra-Orthodox Jewish communities. Additionally, in 2018 she founded Sacred Space, a multi-faith organization which celebrates women and nonbinary people of all faith traditions. In Hebrew, Chava means “Living” and is the name of the first woman God created.

A common Hebrew name for baby girls born around Tu Bishvat, Ilana also honors Black Jewish queer activist Ilana Kaufman. According to the Jewish Women’s Archive, “Kaufman has facilitated trainings for communal professionals and community members to recognize and address racism in the Jewish community through reflection, programming and policy changes. Her public speeches and published writings provide visibility for Jews of color and LGBTQ Jews in Jewish institutions.” Currently, Ilana is the director of the Jews of Color Initiative, which “works to build a truly multiracial, anti-racist Jewish community in which Jews of Color can experience joy and reach their full potential and belonging as leaders and community members.”

Edith Windsor, better known as Edie, is best known for being the lead plaintiff in the 2013 SCOTUS decision which overturned part of the Defense of Marriage Act; before gay marriage was legalized in 2015, this was considered the largest win for marriage equality in the United States. Additionally, Edie volunteered with Gay & Lesbian Advocates & Defenders, the East End Gay Organization and Israeli LGBTQ+ rights group A Wider Bridge.