The Best Jewish LGBTQ Books for Kids of All Ages 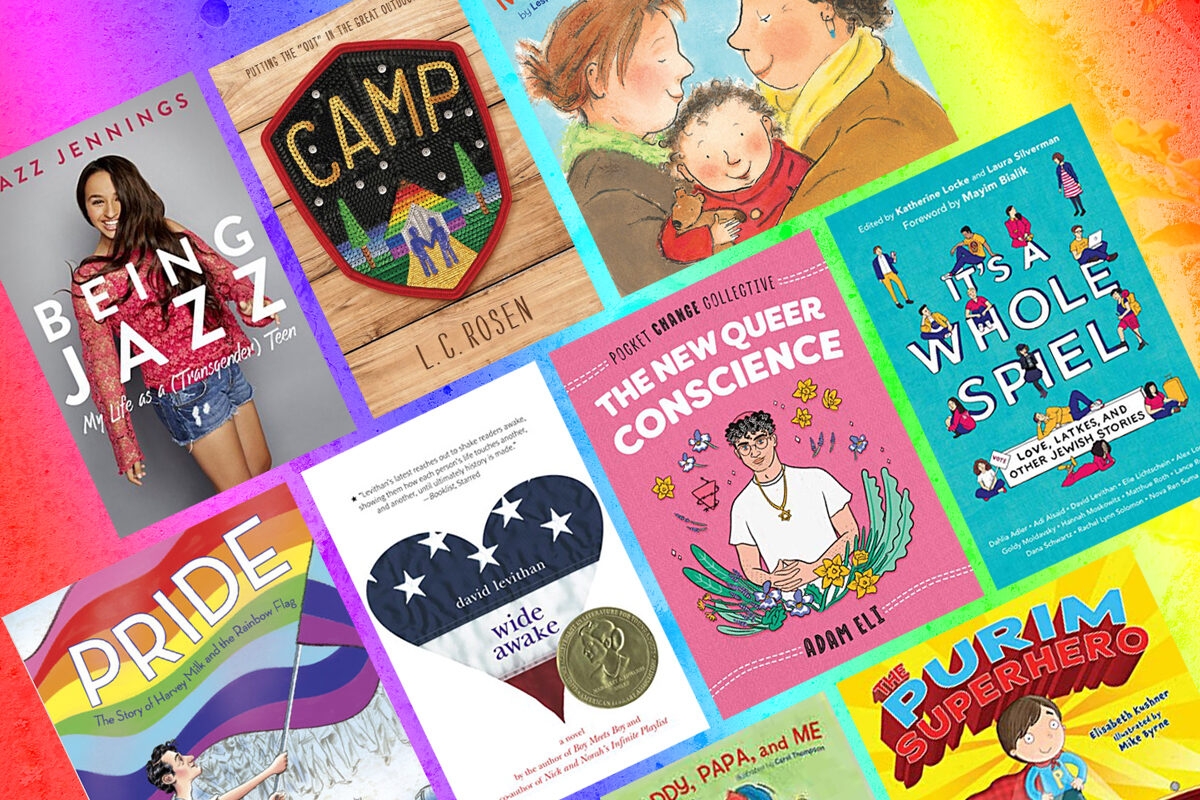 Editor’s note: This piece was originally published on June 29, 2020. We are republishing it today in celebration of Pride month.

Pride month — June — is almost over, but celebrating Jewish LGBTQIA+ voices should be a year-round thing! So we’ve collected some terrific Jewish and Jew-ish LGBTQ children’s books for all ages.

Honestly, I’m a bit sad at how sparse and not Jewish this list is when we have so many amazing queer Jewish icons to look up to. From Magnus Hirschfeld to Harvey Milk to Edith Windsor, Jews have been intricately tied to groundbreaking LGBT activism. I’d love some books celebrating these Jewish icons.

And, while we’re at it, how about some diverse and queer Jewish children’s books? I’d love for my son to have something read to him about the Jewish wisdom of Rabbi Sandra Lawson. Or how about a beautiful, educational, and appetizing Jewish children’s book about Jewish food historian Michael Twitty? There’s just so much good material out there for more literature to inspire our Jewish kids — and they deserve it.

Until that day comes, here are some books celebrating Jewish icons and Jewish queer kids and families. Happy Pride, and happy reading!

Heather Has Two Mommies, Daddy, Papa, and Me and Mommy, Mama & Me by Leslea Newman

Jewish children’s book author Leslea Newman was the first to create a children’s book with lesbian characters — in 1989. Heather Has Two Mommies is an iconic piece of LGBTQ children’s literature history. However, Newman’s other books about queer parents and kids are equally worth checking out. While none of these are Jewish, they are a great way to add diversity to your kids’ library, from very early on.

Harvey Milk and the Rainbow Flag by Rob Sanders, illustrated by Steven Salerno

With gorgeous, bright illustrations, this book celebrates the genesis of the Pride rainbow flag and of Jewish gay rights activist Harvey Milk. While it doesn’t mention Milk’s Jewishness, you, as a parent most certainly can — as writer Marjorie Ingall suggests in this great review.

What Makes a Baby by Cory Silverberg, illustrated by Fiona Smyth

Jewish sexuality educator Cory Silverberg wrote this great book about where babies come from — whether its adoption, IVF or, you know, sex. It is also gender-neutral and inclusive. It’s truly the best way to have that birds and the bees talk in a way that really reflects the myriad ways families are made.

The Purim Superhero  by Elisabeth Kushner, illustrated by Mike Byrne

This delightful kid’s book is about a child struggling with a Purim costume dilemma — should he dress up like an alien, which is what he wants to do, or like a superhero, which is what all of his friends are doing? In the end, he makes a surprising decision, with some help from his two dads. This Jewish children’s book was part of a Keshet-sponsored initiative.

Emma is excited to celebrate her cousin Hannah’s wedding — but everything she imagines the wedding to be (including expecting an actual bear to be the ring bearer) is not at all so. That also includes the groom — who turns out to be a bride. This Jewish children’s book was part of a Keshet-sponsored initiative.

I Am Jazz written Jessica Herthel and Jazz Jennings, illustrated by Shelagh McNicholas

This lovely children’s book tells the childhood of the story of Jazz Jennings, the iconic Jewish YouTuber, TV personality, and trans activist, and is written by Jewish author Jessica Herthel. It’s not Jewish, but it does celebrate an amazing Jewish girl (now woman!).

The family Fletcher has two dads, four kids, and the six of them (plus their pets!) celebrate their diverse religious and cultural backgrounds. One of the dads is Jewish, the other Episcopalian and the Fletcher kids’ Hindu and African American birth backgrounds are all honored in this loving, mutli-cultural family, whose adventures are truly a delight.

Lily and Dunkin by Donna Gephart

This story of a friendship between a bipolar Jewish teen, Dunkin, and Lily, who is trans. The two become the keepers of each other’s secrets in this moving middle reader tale.

Being Jazz: My Life as a (Transgender) Teen by Jazz Jennings

The trans activist’s autobiography isn’t super Jewish, but it does mention her family’s battle with her Jewish day school to use her preferred pronouns and mentions Jewish holidays.

You Asked for Perfect by Laura Silverman

Ariel Stone, is bisexual, very Jewish, and a total over-achiever. After a failed calculus test, his classmate, Amir Naeem, who is gay and comes from a Pakistani Muslim family, agrees to tutor him. The two teens quickly fall for each other — but between the pressures of family, school, and newfound romance, something has got to give.

Gay Jewish writer David Levithan has plenty of Jewish characters in his many novels, but Wide Awake is probably the most Jewish of them all. After Abraham Stein (who may or may not be inspired by Jewish queer icon Gertrude Stein) wins the U.S. presidential elections — making him the first Jewish and gay U.S. president — 17-year-old gay and Jewish teen Duncan Weiss rejoices. But then the governor of Kansas calls the results of the election into question, and Weiss and his boyfriend Jimmy decide to go out there and protest. It’s a book about the power of political activism, which seems especially relevant nowadays.

This anthology features 14 stories about modern Jewish teens — and quite a few of them are about queer teens. “It’s a great and diverse group of Jewish voices,” according to writer L.C. Rosen.

Adam Eli, a Jewish queer organizer who founded the activism group Voices4 wrote this essential pocketbook for queer teens, all about queer responsibility and activism. He leans on his Jewish faith to explain the importance of kindness, support, and social justice.

This coming-of-age story about Suzette, who is Black, Jewish, and bisexual, and her relationship with her stepbrother, Lionel, who has bipolar disorder, is a phenomenal and important read.

Jack of Hearts by L.C. Rosen

Jack Rothman, the hero of Jack of Hearts, is Jewish — but that’s not really part of his story. For Jack, who is hardly the only openly gay student in his private Manhattan high school, having sex is just an important and (usually) joyful part of his teen life — that is until a mysterious and cruel anonymous blackmailer tries to get him to stop sleeping with other people. Jack of Hearts is a wonderfully sex-positive book, and truly a great book for all queer Jewish teens. In the book, Jack writes and anonymous sex advice column as “Jack of Hearts”, and his sex advice is spot on. As author Rosen told me: “Queer kids need to see healthy, realistic sex scenes and also need to get their sex ed from somewhere.”

A queer book about camp — does it get any more Jewish than that? Three of the main characters in Camp are incidentally Jewish, though the book takes place at a queer camp. It’s an amazing exploration of how toxic masculinity can enter even the safest of safe spaces, and it’s also a beautiful romance.

The Frog and Toad books by Arnold Lobel

One can not write a queer reading list without mentioning Frog and Toad, written by iconic Jewish writer and illustrator Lobel. The books — which chronicles the beautiful relationship between a frog and a toad and their many adventures —  are possibly (or, in my opinion, definitely) about gay love. Lobel’s daughter agrees: “[They are] of the same sex, and they love each other. It was quite ahead of its time in that respect.”