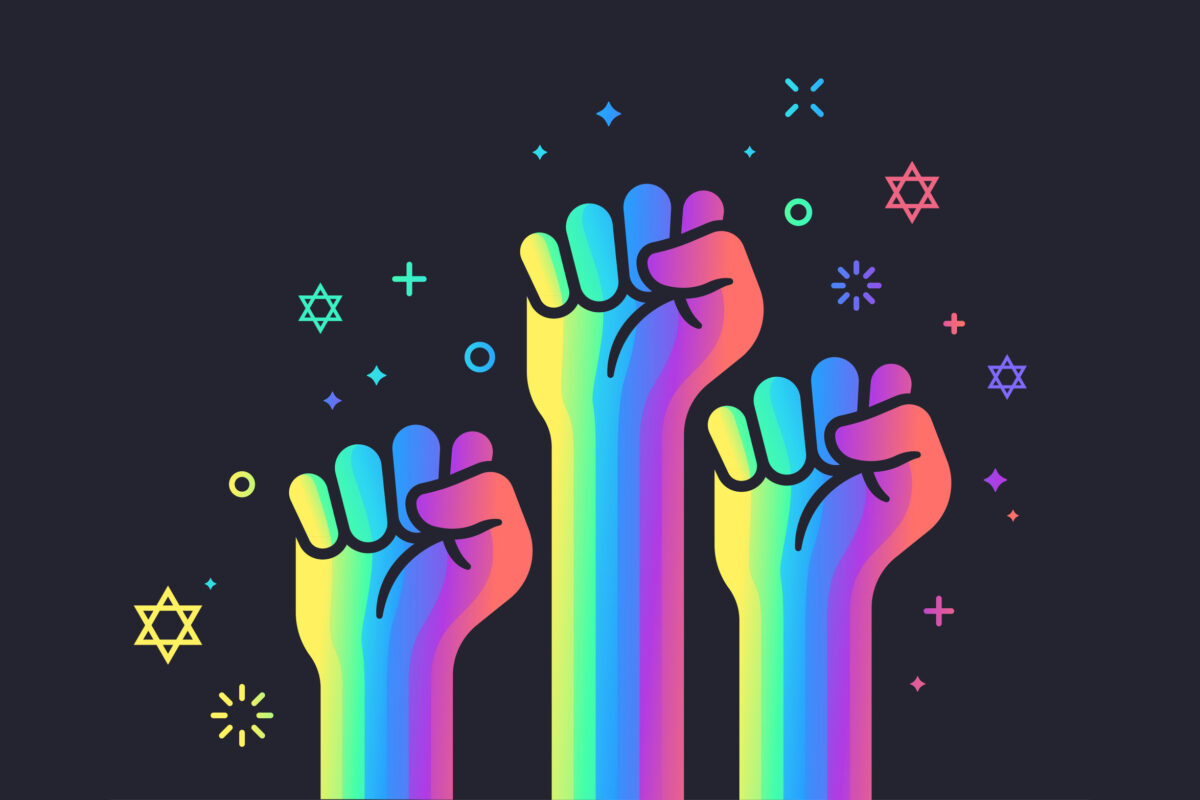 As this pandemic-era Pride month comes to a close, many of us are mourning the loss of the in-person celebrations that were cancelled due to Covid-19. True, many events went virtual — the 50th anniversary of New York City’s Pride March was celebrated with multiple online events, including a “brunch” hosted by Jew York Pride. But there’s no substitute for the real thing.

At the same time, however, social distancing has highlighted just how crucial social media is as a tool for elevating marginalized voices. As Instagram and Twitter have become essential forums for sharing racial justice resources through the Black Lives Matter movement, it’s important that we all check our privilege and biases and ensure the breadth of human experience is reflected in our social media feeds.

So, just as Kveller recently highlighted Jews of Color we should all be following on social media, we are also spotlighting some remarkable Jewish LGBTQIA+ activists to add to your feeds. Our Jewish communities are blessed with diversity and variation of experiences, including amazing trans and queer activists. Here are 13 people you should follow, support, and learn from, starting now.

Author of The New Queer Conscience and founder of Voices 4, a New-York based LGBT advocacy group, Adam Eli uses his own queer identity and Jewish values to advocate for community responsibility and unity.

I wrote a book for young adults about the idea that queer people anywhere are responsible for queer people everywhere. Coming soon thanks to @PenguinTeen!

Raised in a Hasidic family in Williamsburg, Brooklyn, Stein learned about queerness through her own research. Upon coming out as a woman of trans experience, Stein left her community and forged her own way as an author and an advocate. She is the author of Becoming Eve: My Journey From Ultra-Orthodox Rabbi to Transgender Woman, and actively supports and uplifts trans narratives on social media. Follow Abby for uplifting content about Jewishness, queerness, and even gefilte fish! Check out Alma’s video profile of Abby here.

"Know that you're not alone."

Full video (minus the pre recorded part) if today on @TODAYshow, with @alroker, @SheinelleJones, and @craigmelvin!

Founder of Beyn Kodesh L’Chol, a “community in formation for Jews and Jewish adjacent folks,” Rabbi Becky creates an explicitly anti-racist and LGBTQ-embracing community for all who seek it. Along with multiple advising roles in the Boston area, Rabbi Becky is a queer and trans activist in all corners of his work, including social media.

A co-host of Be’chol Lashon’s groundbreaking Juneteenth Shabbat celebration, Rabbi Sandra weaves joyful guitar music and advocacy for fellow queer and Black Jews into her role as a social media savvy rabbi. Trust us when we say you need more voices like Rabbi Sandra’s in your feed.

Rabbi Mike Moskowitz combines his values of traditional Judaism with advocacy for trans rights and LGBTQ inclusivity as the scholar-in-residence at New York’s Beit Simchat Torah, the world’s largest LGBTQ synagogue. Through the perspective of a staunch ally, he writes for different publications about the intersections of Jewishness and queerness, and has also published Textual Activism, a book that centers Jewish texts as foundations for advocacy.

Getting ready for Pride Shabbos! pic.twitter.com/8QYUaZbuPU

Rabbi Ruti is a queer activist who works “at the margins of the Jewish community” to advocate disability inclusivity. She is the Rabbinic Disability Scholar in Residence at Matan, an organization that works to empower individuals, families, and professionals with disabilities to find a meaningful space in Jewish life.

A thread about where I’m coming from as a rabbi: My starting premise is that Jews are good at being Jewish.

Author and culinary historian Michael Twitty will bless your feed with humor, lessons, and Black and queer activism. Follow for wisdom, advocacy, and yummy food inspo!

Rabbi Ruth founded the website Coffee Shop Rabbi, a forum for discussing Jewish topics and Jewish identity. On Twitter, she self-identifies as a fat, lesbian, and disabled Rabbi, and she centers conversations about social justice and queerness.

The Christian Right, the Bostock decision, and the struggle to define religious freedom | The Conversationalist https://t.co/UHiQYPndcM

Through her art and photography, Yael Malka tells stories of identity, self-expression, and history. Some of her most recent work includes a photo series of the Black Trans Lives Matter protest at the Brooklyn Museum, while her past work includes portraits of queer couples and a photo project with Holocaust survivor Ruth Muschkies Webber for ZEITMagazin.

I believe in BLACK TRANS POWER, I believe BLACK TRANS LIVES MATTER. An estimated 15,000 folks showed up at today’s march, everyone dressed in white. Black (+ Brown) trans femmes are the reason we have queer liberation — it must INCLUDE THEM!!!

Amichai Lau-Lavi is the Founding Spiritual Leader of Lab/Shul, an experimental community for Jewish gatherings based in NYC. Working with both Keshet and SAGE USA, he serves as a staunch advocate for Jewish and elder LGBTQ communities, in particular .

#nojusticenopride! Today @labshul – we rise with PRIDE. Whether you are taking action at home or in the streets, we see and celebrate you. 🏳️‍🌈 Heading to the March? Lab/Shul will be meeting at 26 Federal Plaza at 12:30pm. You can spot us easily because we'll be holding our Queer Saints! 🏳️‍🌈 Taking action at home? Join us virtually for Step Out/Up, our multifaith Pride kickoff >>> http://labshul.org/event/step-out-up/

Kate has written about nonbinary gender identity for more than 30 years, in her four books and beyond. Kate has advocated for trans issues since coming out as a transgender woman in 1984 and later coming out as nonbinary in 1988. She now advocates for teen suicide prevention, and speaks at school events regularly to discuss gender identity.

In the late 80s/90s, many trans folks going on daytime talkshows weren’t adverse to talking about our bodies in transition. We were trying to increase visibility, and it was our key to air time. I carried that over into my book Gender Outlaw. https://t.co/8kgc5AMPQn

As Jewish programming director at New York’s 92nd Street Y and coordinator of social media at ACT UP NY, Jason Rosenberg uses both his personal and professional social media presence to engage with both human rights issues and Judaism. His fight for an end to AIDS through ACT UP includes advocating for universal access to PrEP, an HIV prevention pill, and taking an active role in the Queer Liberation March at Foley Square.

Pretty stoked to be recognized on the #Logo30 list on what would have been Larry Kramer’s 85th birthday. We will continue to invoke and honor your name with action. I still find it necessary to call attention to the 60% of @logotv employees that were laid off during a pandemic via @viacomcbs just a few months ago. If these large media corporations wish to unveil these large-scale pride campaigns, the least they could do is protect their queer staff. Our continued fight for liberation has always been rooted in labor justice. @logotv @viacomcbs do better. also original photo by @hunterabrams !!

Rafi is a queer trans dad who works as a family and couples therapist while remaining a stalwart advocate for trans rights. As we learned on Kveller’s Call Your Mother episode, Rafi has a unique perspective on parenting as a single trans dad and speaks publicly about his experiences.

Oh hi! I get to be famous again for a day! Happy Trans Day of Visibility and don't ever let someone convince you that you cannot have your cake and eat it too. Why the hell else would you have cake? https://t.co/57KORnJUUP