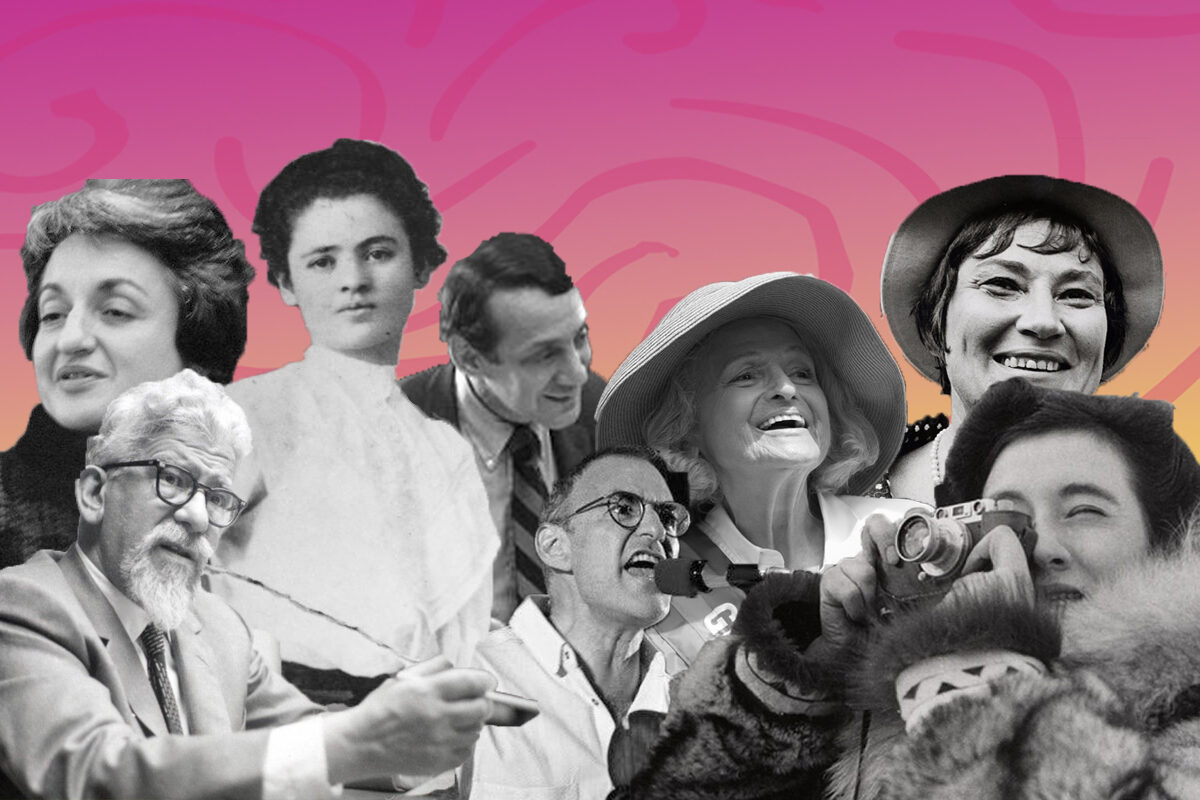 2020 has brought many, many unexpected changes to our lives — and not all of them as awful as the Covid-19 pandemic. Many Americans and communities around the world have renewed their commitment to social justice as the Black Lives Matter movement gains international traction.

As we reflect upon how we can best use our voices and actions in this moment, it’s important to remember the strength and chutzpah of Jewish activists who were pioneering in their commitment to tikkun olam. One meaningful way to honor the legacy of someone who fought for so many? Name your child after one of these Jewish heroes!

In Hebrew, Ruth means “friend,” and Supreme Court Justice Ruth Bader Ginsburg is a true friend to the marginalized — she’s fought for women’s rights and civil rights for the entirety of her storied career, including pioneering the ACLU Women’s Rights Project in 1972 after facing discrimination in the hiring process at Rutgers Law. The second-ever woman to serve on the U.S. Supreme Court, Ginsburg’s commitment to gender equality can be seen in important decisions like United States v. Virginia, which ruled that the Virginia Military Institute could not refuse to admit women.

Choosing the name Ruth can also honor Ruth Gruber, a heroic Russian Jewish journalist in the early 20th century. After writing about the diversity of Brooklyn’s neighborhoods and winning a fellowship to write about women under fascism, Secretary of the Interior Harold L. Ickes recruited Gruber to cover and assist a rescue of Holocaust refugees from Europe to upstate New York. She wrote about the experience in a book Haven: The Unknown Story of 1,000 World War II Refugees, which was made into an exhibit at the state museum in Albany, as well as a television miniseries.

Avital Sharanksy’s husband, Natan Sharansky, is an Israeli politician, activist, and author who was sentenced to 13 years of hard labor in a Soviet gulag after being accused of spying for the U.S. due to his involvement in human rights activism in Moscow. After a nine-year public campaign to free her husband from Soviet imprisonment, Avital Sharansky sparked a global movement that led to the eventual release of over a million Jews.

While many are aware of Rabbi Joshua Heschel’s contribution to the Civil Rights Movement (see below), he wasn’t the only rabbi who came to the forefront to join the fight. Before coming to the United States, Rabbi Joachim Prinz — who was the rabbi of Berlin’s independent Friedenstempel synagogue for 11 years before he was expelled from Germany in 1937 — helped thousands of Jews escape Germany before the Holocaust. He became a leader in the American Jewish community, serving as president of the American Jewish Congress from 1959 to 1966, during which time he championed civil rights. In 1963, Prinz made a speech at the March on Washington to express the “disgrace of silence in the face of injustice” by those choosing not to join the movement.

A founding mother of the second wave feminist movement, Betty Friedan was the author of The Feminine Mystique (1963), a book that spoke to thousands of American middle-class (white) women in the mid-20th century, discontent with their comfortable yet unfulfilling roles as housewives. She reflected upon the patriarchal systems that shaped her own Jewish family, shedding light on gender roles and disparities within the Jewish community and beyond. Friedan is a key player in FX and Hulu’s limited series Mrs. America, which features other Jewish feminists like Gloria Steinem and Bella Abzug. The name Betty evokes the bravery and eloquence of this foundational feminist who dared to articulate “the problem that has no name.”

A lawyer in the 1960s and ’70s, Bella Abzug was a fierce advocate for women’s rights, environmentalism, and other social causes. Abzug is known for her famous line: “This woman’s place is in the House — the House of Representatives.” Naming your child Belle or Bella can also invoke the work of another great (non-Jewish) feminist of this era: Black theorist and scholar bell hooks, who championed intersectional feminism and urged white feminists to include women of color in works like Ain’t I a Woman: Black Women and Feminism and Feminism Is for Everybody: Passionate Politics.

Rabbi, scholar, and author Arthur Waskow wrote the famous book The Freedom Seder (1969), which brought modern themes of civil rights and nonviolence to the traditional Passover seder. This haggadah invites the rhetoric of liberation through civil rights, feminist, and other movements to intersect with Judaism, bringing a new social justice lens to a beloved Jewish tradition. Waskow founded the Shalom Center, which “works to promote peace in the middle east, interfaith dialogues, and interfaith responses to global climate change.”

Choosing this name can also honor Rabbi Arthur Hertzberg (1921-2006), a 1960s-era rabbi and advocate famous for his active role in American civil rights, participating in the March on Washington with Dr. King, as well as his initiation of Catholic-Jewish dialogue during the papacy of Pope XXIII. With Hebrew origins meaning “brave and strong,” the name Arthur could also inspire the gender neutral names Artie or Art.

While Abraham is a foundational biblical figure in Judaism, Rabbi Abraham Joshua Heschel lived out this legacy by advocating for peace and civil rights in 1960s America. Heschel was a Polish rabbi who came to the United States in 1940 to teach at Hebrew Union College, later becoming a professor of ethics and mysticism. Called a “great prophet” by Martin Luther King Jr., Heschel answered the call for allyship in 1965 when he marched from Selma to Montgomery with Dr. Martin Luther King Jr. In a later text, he notes that he felt his “legs were praying” as he marched for racial justice.

Abie Nathan, born to a Jewish family in Iran, was living in India when he became an aircraft pilot during WWII. Though he lost his bid for the Knesset in 1965, he offered to fly to Egypt, an enemy country, with a message of peace. After being labeled a peace activist, Nathan fundraised for and founded refugee camps all over the world and contributed to cancer research foundations and campaigns for the elderly. He was imprisoned twice for advocating for the repealing of a law that prevented Israelis from meeting with the PLO, but his messages of peace and love remained abundant through his Israeli radio station, Voice of Peace.

These two Jewish New Yorkers served as voter registration volunteers in Meridian, Mississippi with James Chaney (1943-1964), a young Black Mississippian. The three volunteers were killed by the KKK. The publicity of their deaths is thought to be a tipping point in the passing of the Voting Rights Act of 1965, which aimed to eliminate barriers that prevented African Americans from exercising their rights to vote at a state and national level. Any of these three names could honor their lives lost too early, and serve as a reminder that hate will never prevail.

Unlike the corrupt Roman emperor named Julius, Sears Roebuck CEO Julius Rosenwald used his great monetary power to give back to the marginalized. Rosenwald is known to be the greatest single contributor to Southern Black causes in America in the early 20th century. After reading Booker T. Washington’s Up From Slavery, Rosenwald became a board member of the Tuskegee Institute and bestowed a grant to build rural schoolhouses across the South. Modern versions of this name could be Julie, Jules, or Julian.

With a first name meaning “battle worthy,” gay Jewish activist Harvey Milk lived up to his legacy as one of the first openly gay elected officials in the United States. After running for multiple San Francisco city council positions, Milk won his third bid for San Francisco City-County Supervisor on January 9, 1978. He launched a progressive agenda advocating for working mothers, gay rights, and low-income individuals, speaking frequently and using his charisma and passion to unite his San Francisco community before his assassination in 1979. If you’re a fan of Milk but the name doesn’t do it for you, consider Bernard instead, or even Millie!

In Hebrew, the name Rebecca means “captivating” — and Black Jewish feminist writer Rebecca Walker lives up to her namesake.The daughter of famous Black author Alice Walker (from who she is now estranged) who wrote The Color Purple and white Jewish civil rights lawyer Mel Leventhal, Walker is a co-founder of the Third Wave Direct Action Foundation which helped register up to 20,000 new voters in inner cities across the U.S. She’s also the author of books championing intersectional feminism, including her memoir Black, White and Jewish: Autobiography of a Shifting Self.

After fleeing pogroms in her home city of Gorodok, Ukraine Jewish immigrant Clara Shavelson was a key figure in International Ladies’ Garment Workers’ Union, speaking in Yiddish at the Triangle Shirtwaist factory strike of 1909. Following the deadly fire, Shavelson played a key role in labor union work, women’s suffrage, and consumer advocacy. Name your child for this outspoken leader of worker’s rights.

Larry Kramer was a leading activist for those living with HIV in the 1980s and throughout the AIDS epidemic. He advocated for the U.S. to treat the AIDS crisis as a public health emergency, founding both the ACT UP advocacy group and Gay Men’s Health Crisis, now one of the biggest AIDS service organizations in the world. Kramer also crossed paths with Dr. Anthony Fauci earlier in his career, calling Fauci a killer and inspiring him to take more concrete steps to fight the AIDS crisis in America. The two later became friends.

Edith Windsor was a groundbreaking advocate for LGBTQ rights — as the lead plaintiff in the 2013 case United States v. Windsor, she overturned Section 3 of the Defense of Marriage Act, an essential step toward same-sex marriage rights in the United States. Renowned as a national icon, Windsor was called by President Obama and named a runner up for Time magazine’s person of the year in 2013.