20 Jewish Superstitions That Will Absolutely Ward Off the Evil Eye 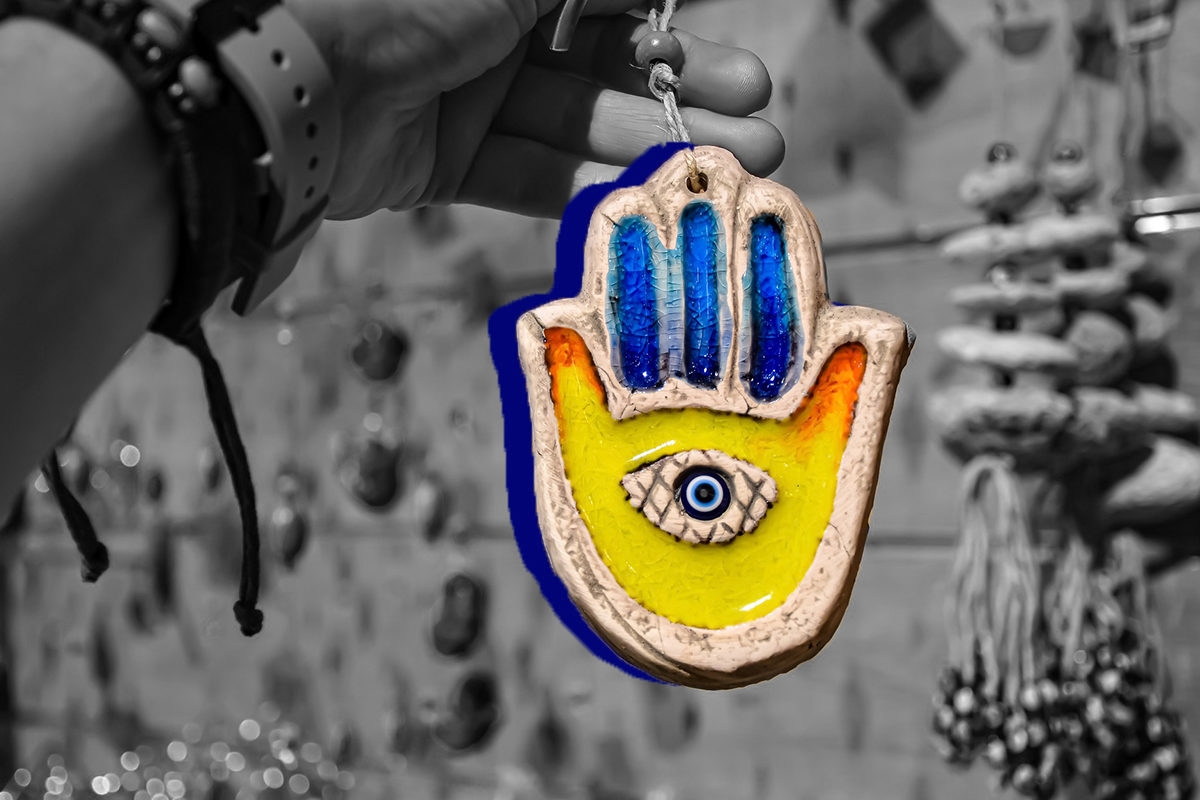 Why do our bubbes spit three times after something amazing happens? And why do Jews cover all the mirrors in the house when they sit shiva after somebody dies? Close your eyes and imagine Jerry Seinfeld asking, “What’s the deal with Jews and superstitions!?”

It all comes down to one thing: the evil eye. Called ayin ha’ra in Hebrew, the evil eye is the idea that a demon or a person can bewitch someone just by looking at them. (Eeek!) This superstitious belief isn’t just folklore — the evil eye is mentioned in rabbinic texts, too.

In a piece of Midrash, rabbis suggest that the evil eye played a part in several chapters of the Torah. Remember when Hagar, Abraham’s baby mama, had a miscarriage before giving birth to her son, Ishmael? The rabbis argue that Abraham’s wife, Sarah, cast an evil eye on Hagar, causing the miscarriage.

Here’s another fun fact: The Talmud recommends that when Jews perform the ritual of tashlich — casting sins away by throwing symbolic breadcrumbs into a body of water — they do it in a body of water that has fish because “fish are incapable of being affected by the evil eye.” Who knew fish were such lucky ducks?

Naturally, being the deep thinkers that we are, Jews have equipped themselves with all sorts of tools, amulets, and sayings that help ward off the evil eye. From tugging on your ears to stashing some salt in jacket pockets (yes, really), here are 20 Jewish superstitions you should know.

Possibly one of the more well-known Jewish superstitions is to wear a red string on your left wrist to ward off evil. Ironically, the red string bracelet isn’t a practice that’s deeply rooted in religious text, and has actually been documented in many different cultures and countries like China and Greece.

Popularized by celebrity Kabbalah devotees like Madonna, the talisman’s main purpose is to protect the wearer from evil spirits. Even president Trump’s former lawyer, Michael Cohen, wore one while he testified before the House Committee on Oversight and Reform.

Other superstitions tied to the red string bracelet is that once it falls off a woman’s wrist naturally, she’ll meet the person she’ll marry. It’s also associated with increased fertility and protection from bloodshed in war.

What better way to get the big bad evil eye off your back than to spit directly into it? After seeing, hearing, or learning of something absolutely awful, it’s customary to spit three times to ward off the evil eye. On the flip side, Jews also “pu pu pu” after receiving good news, also to make sure the evil eye doesn’t spoil a good time.

Some people just say “pu pu pu,” and others precede it with “kein ayin hara,” which means “no evil eye.” The combination is basically the Jewish version of knocking on wood. Some people combine the three words and simply say “kenahora” to halt an evil eye.

Have you ever seen someone chew on a piece of thread while at the tailor? OK, I haven’t — but it’s a thing. One explanation for the bubbe meise (old wives’ tale) is that, when someone dies, burial shrouds are sewn around the remains of their body. By chewing on thread while someone sews their garments, Jews make it clear that they are very much alive and not ready for the angel of death.

4. Tugging on your ears when you sneeze

We don’t really know how this custom came to be, but especially for Jews from Galicia and Lithuania, it’s customary to tug one’s ears after sneezing, along with reciting the Yiddish phrase “tzu langehmazaldikker yohrn” (“to long, lucky years”).

5. Sneeze on the truth

Midrash legend has it that when someone sneezed it meant they were going to die. This comes from the folklore that, until Jacob’s time, when a person was about to die they’d sneeze and pass away instantly.

Today, some Jews believe that if a person sneezes while they’re talking, whatever they said will happen. OK, so this isn’t necessarily a way to protect against the evil eye, but it’s a fun Jewish superstition nonetheless. The more you know!

Always make sure to close your book before you leave it, or the evil powers of demons will steal the “holy knowledge” and use it for diabolic plans!

7. Put salt in your pockets and corners of the room

Jews used to be so scared of demons living in their houses that they’d pay people to move in first to make sure the coast is clear. They also used to put salt in areas of the house where evil creatures lived, because salt is believed to have powers against evil spirits.

Jews regard metal as a protective substance, so naturally, it’s customary to wear a metal pin on clothing for a new trip. The power of metal comes from the idea that it’s a product of civilization, and therefore metal can ward off evil spirits of a less sophisticated society. Cool!

Here’s another reason why metal is so meaningful to Jews: Barzel, which is “iron” in Hebrew, is an acronym for the names of the mothers of the Children of Israel (Bilhah, Rachel, Zilpha, and Leah).

Have you ever wondered why baby showers aren’t customary in the Jewish tradition? The superstition holds that buying presents for an unborn baby can lead to a terrible outcome for the mother and/or the baby. But having a baby shower isn’t against Jewish law, so if you’re not superstitious, go for it!

10. Never put a hat or shoes on your bed

If you toss a baseball cap, beanie, or fedora on your bed, those pesky evil spirits will target you. Likewise, never put shoes on your bed.

As previously noted, fish are impervious to being affected by the evil eye, mostly because they’re the only animals to survive the flood — you know, Noah’s flood?

12. Bring jam to a housewarming party

Strawberry, raspberry, blueberry, or any flavor jam is more than just a tasty gift to bring to a new home — it also serves as a distraction. While guests celebrate a new beginning, demons nosh on sweet jam instead of wreaking havoc.

13. Smashing glass at a wedding ceremony

The groom smashing a glass wrapped in cloth at the end of a wedding ceremony is one of the most recognized Jewish customs. And there’s actually two explanations behind it.

One reason is to commemorate the destruction of the temple in Jerusalem. The second reason has to do with the Jewish demon, Lilith, otherwise known as the incarnation of lust. In Jewish Magic and Superstition, author Joshua Trachtenberg says that smashing a glass was customary to ward off evil spirits, specifically Lilith.

At a Jewish wedding, the bride will usually circle around her groom under the huppah three or seven times. Why? Some say it builds a magical wall of protection against temptation, other women, and the evil eye.

15. Cover mirrors after a death

When Jews sit shiva — a mourning period of seven days for the recently deceased — it’s traditional to cover all mirrors in the household. There are some practical reasons behind this, like focusing on mourning the dead as opposed to our physical appearance. But here’s the superstitious explanation: When someone dies, evil spirits come lurking to fill the new void. These demons can only be seen through a mirror, so Jews cover them as to not be alarmed by the spirits.

16. Wash your hands after a funeral

Or the evil eye will bring death into your house.

17. Don’t take a direct path home from the cemetery

Cemeteries are filled with evil spirits, so after visiting a loved one don’t go directly home. To get the demons off your trail, walk all over the grounds to shake them off.

18. Every day is opposite day

Unless everyone is aware of the superstition, don’t try this one at home. To protect others from the evil eye, many Jews will say the opposite of what they mean. For example, one might tell an intelligent young woman that she’s stupid just to confuse the evil eye.

19. Change your name when you’re sick

Every time you get sick is like an alarm clock for the angel of death. Change your name and you’ll be safe!

The hamsa, a hand shaped charm with an eye in the center, is perhaps the most recognized Jewish amulet. Notably, the hamsa’s origins are not exclusive to Judaism — it has Christian and Islamic roots, too. Some Jewish hamsas have images of fish and the Star of David, two icons that also serve as protection against the evil eye.