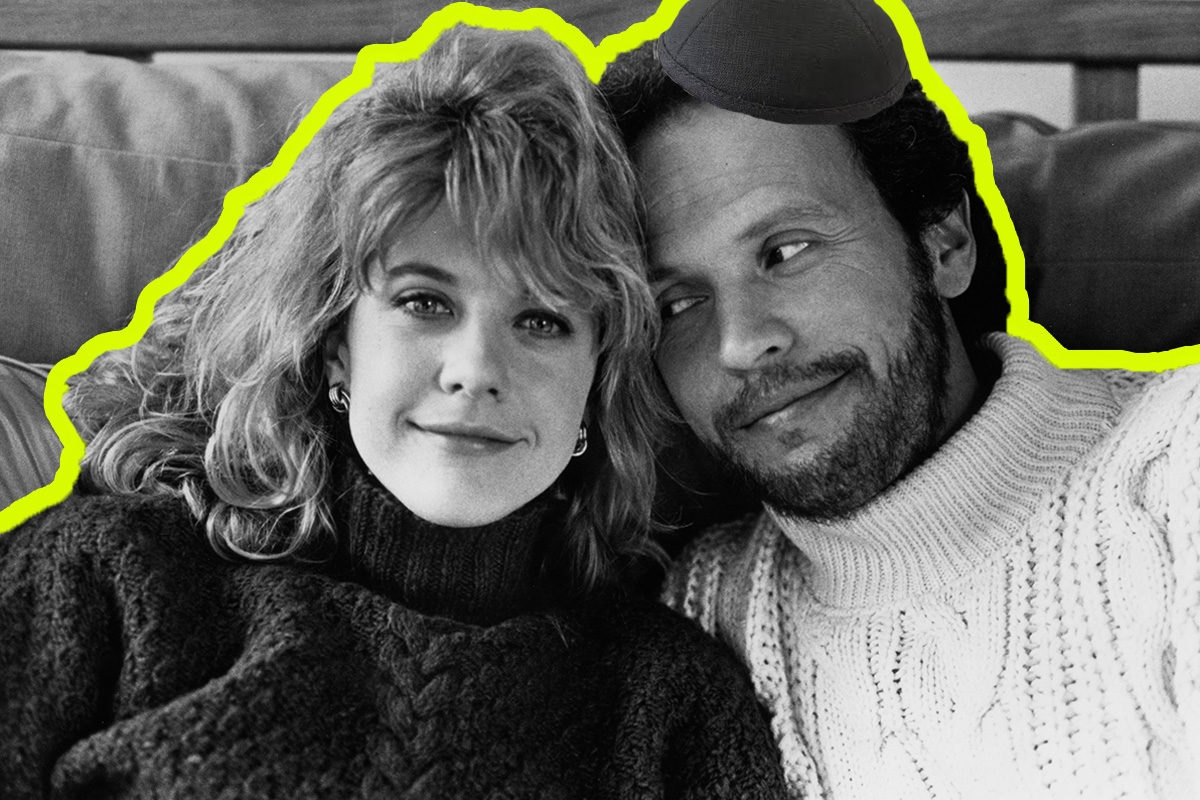 The first time I saw When Harry Met Sally I had no idea I was witnessing the most iconic fake orgasm scene in the history of cinema. Granted, I was 8, and had yet to discover what an orgasm even was.

Today, I’m fully aware of the impact the late Nora Ephron’s movie had on American society. Very loosely based on director Rob Reiner’s life, When Harry Met Sally asks the question: Can women and men share a platonic relationship, or does sex always get in the way?

It’s hard to believe, but this most quintessential of romantic comedies is celebrating its 30th birthday this week! Back in 1989, audiences were delighted with the movie, which opens with new college graduates Harry Burns (Billy Crystal) and Sally Albright (Meg Ryan) embarking on a road trip from Chicago to New York City to start their new lives. Harry claims that men and women can’t be friends, and Sally, seemingly completely unattracted to her road trip partner, disagrees. The plot thickens when the pair reunite a decade later and their friendship flourishes into an unlikely romance.

Famed for coining the term “high maintenance” and for being one of the first movies to say the word “orgasm,” When Harry Met Sally has stood the test of time. Really! Thirty years later, the infamous line — “I’ll have what she’s having” — is as iconic as ever, and the age-old question of platonic female and male friendship lingers.

In honor of the covertly Jewish movie’s big 3-0, we rounded up the all the Jew-y facts to know about When Harry Met Sally.

1. First off, let’s review all the Jews who contributed to When Harry Met Sally, beginning with the incredible Nora Ephron, who wrote the screenplay.

2. Next up is the very Jewish director and producer Rob Reiner! To create Harry, Ephron drew inspiration from Reiner, 72.

3. If you couldn’t tell, Andrew Scheinman, 71, is the other Jewish producer.

4. The lead character Harry was, of course, played by Jewish dad Billy Crystal. Though he had had film roles before — notably as Miracle Max in The Princess Bride — Harry is considered his breakout role and earned him a Golden Globe nomination.

6. Renowned Jewish composer and lyricist Marc Shaiman made the music for When Harry Met Sally. Experiencing a smidge of deja vu? It’s probably because he also made the music for The Addams Family (read our Jewish facts about those movies here).

7. Barry Sonnenfeld, who also worked on The Addams Family, was the film’s cinematographer. Continue reading for an extra fact about him.

8. The music wasn’t all by Shaiman, though. In 1924, Jewish lyricist Guz Kahn wrote the lyrics to “It Had to Be You,” one of the more popular songs from the film.

9. Alright, now that we’ve established the Jews of When Harry Met Sally, let’s get to the good stuff: the orgasm deli scene. Filmed in Katz’s Delicatessen in Manhattan, the Jewish deli owes at least some of its extraordinary success to Ryan’s infamous fake orgasm at one of their tables.

10. Katz’s Deli has become so famously associated with When Harry Met Sally that for the 30th anniversary of the movie, the legendary NYC deli hosted a scene reenactment contest. Yowza!

We’ll be celebrating the 30th anniversary of the iconic ‘When Harry Met Sally’ all year. So come on in and have what ‘she had’.👀❤️😎 Thanks @johncarlosmcmaster for the incredible recreation.

11. Equally as iconic as Sally’s fake orgasm is the elderly Jewish woman at the deli, who tells her waitress: “I’ll have what she’s having.” The story behind the line is pretty adorable: said elderly lady is actually director Reiner’s mother. Crystal supposedly came up with the line, and Reiner knew he needed an older Jewish woman to play the role. So, he asked his mom to come to the set, telling her that the line will hopefully be “the topper” but that they might cut it. “Oh, it’s OK! I just like spending the day with you,” she told her son. Awww.

12. While his mother was on set, Reiner, as directors do, directed Ryan on how to execute the fake orgasm. He sat down at the booth across Crystal, pounded on the table saying, “Yes! Yes! Yes!” As soon as he finished (um, metaphorically, of course) Reiner said to Crystal: “Uh-oh. I just realized I had a huge orgasm in front of my mother!”

14. At the 30th anniversary reunion of When Harry Met Sally, Crystal revealed he was  nervous when Princess Diana saw the premiere in London. The actor said everyone “shifted their weight and turned around to see how she was gonna react” to the deli scene, and, to his delight, she loved it! In fact, she was so taken with the movie that she subsequently hosted a private screening at Buckingham Palace. Royalty: They’re truly just like us! (But, like, with palaces.) 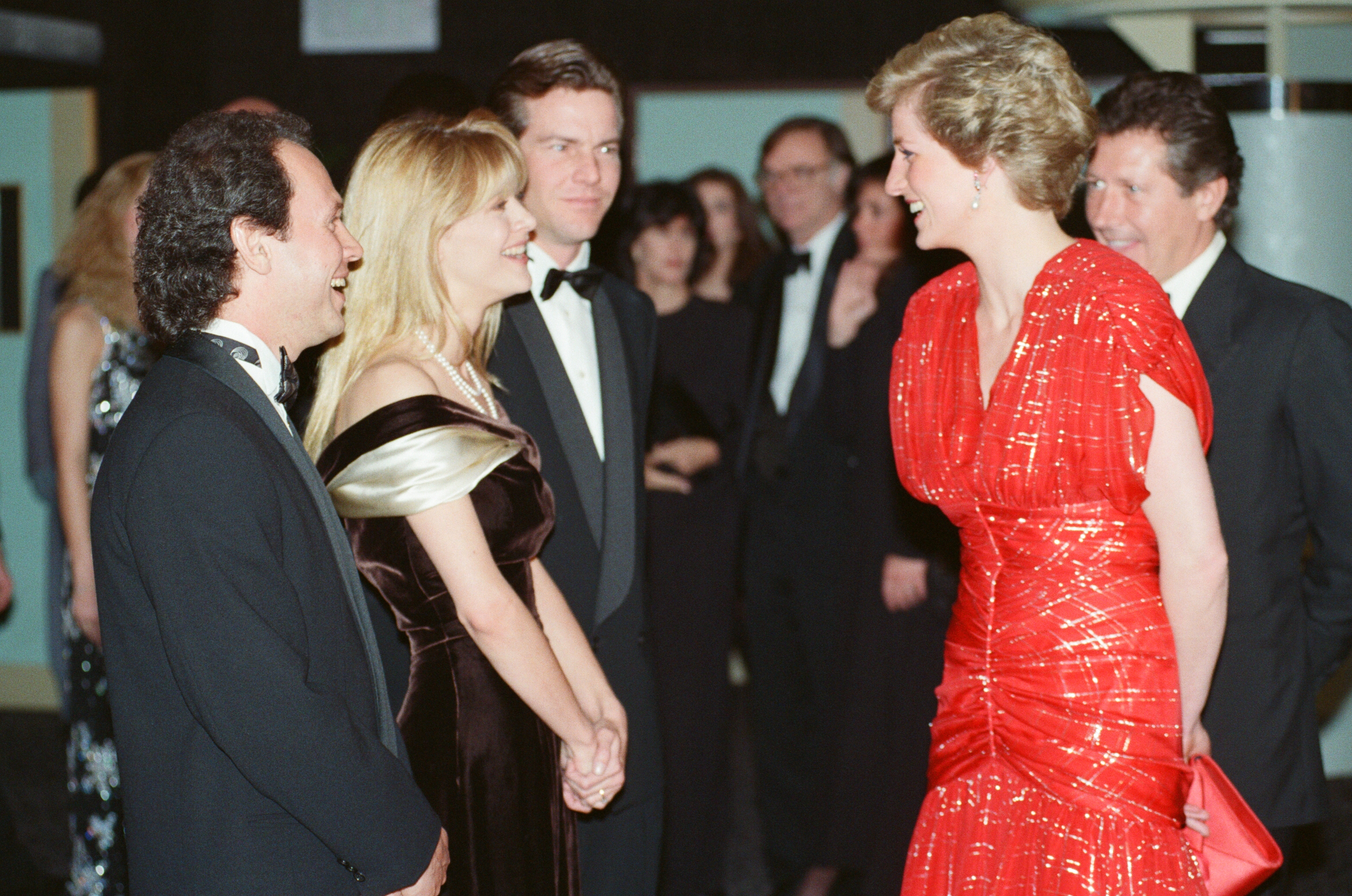 Billy Crystal and Megan Ryan with Princess Diana at the “When Harry Met Sally” premiere in London’s West End.

15. Jewish mom Alyson Hannigan, 45, reprised the role of Sally in a not-so-hot stage version of the movie. Apparently Hannigan rocked the role, but her late co-star Luke Perry was a dud as Harry.

16. Here’s a super interesting fact involving the Jewish “Martha Stewart of Marijuana,” Cheryl Shuman. Stylists wanted Ryan to wear glasses so she’d appear “less beautiful” to make her relationship with Crystal’s character more believable. At the time, Shuman ran Starry Eyes Optical Services, and was tasked with providing eyewear options for Ryan. The actress ultimately wore Shuman’s very own pair, which led to a massive explosion of requests for the same glasses after the movie was released. Shuman then went on to launch the  largest cannabis media source in the world, Kush Magazine.

17. In the quest to establish the best Jewish film, screenwriter Dan Mazer argued for When Harry Met Sally: “Although not specifically a ‘Jewish’ film, it is infused with an unmistakably New York Jewish sensibility via both the peerless Nora Ephron’s extraordinary script and Rob Reiner’s sublime direction.”

19. Remember the couple interviews interspersed throughout the movie? They were inspired by a Jewish couple’s love story. While visiting the Jewish chairman of Walt Disney Studios, Alan Horn, at his parents’ house, Reiner asked Horn’s father how he met his wife. Reiner was inspired, and collected stories from older couples about their love lives for the film. The real couples got distracted while telling their stories — including Ephron’s parents and the best man at Reiner’s parents’ wedding — so they were recorded and given to actors to recite edited versions.

20. The sweetest Jewish fact is saved for for last: Harry and Sally weren’t meant to fall in love with each other. Nu, what changed? Originally called Scenes From a Friendship, Ephron’s screenplay was based on her friendship with Reiner. “Billy played an extension of me, and Meg played an extension of Nora,” Reiner said. “Absolutely.”

However, while they were working on the film, cinematographer Sonnenfeld played matchmaker, and brought his friend Michele Singer to set. “You’re going to marry her,” he told Reiner.

“What, are you nuts?” Reiner quipped back.

He wasn’t. As soon as he laid eyes on Singer, Reiner was infatuated. His opening line was: “You know, you really shouldn’t smoke. It’s not good for your health.”

“And you shouldn’t be so fucking fat,” Singer replied.

Inspired by the blossoming romance, Reiner and Ephron changed the script from Harry and Sally drifting apart to falling deeply in love. And guess what else? Reiner and Singer are also celebrating their 30th wedding anniversary this year! Mazel tov!