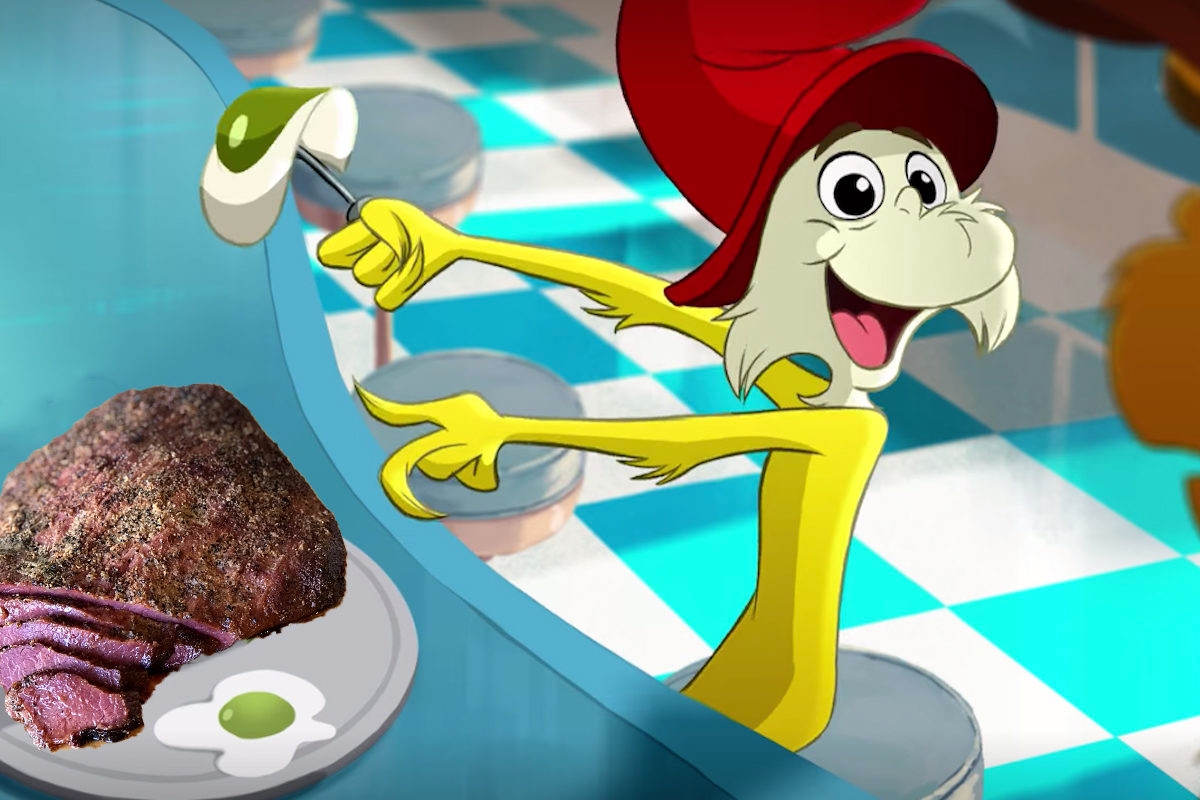 Dr. Seuss’ iconic Green Eggs and Ham might not be kosher, but it sure is Jew-ish — heavy emphasis on the ish.

If you don’t recall, Green Eggs and Ham is about a character named Sam-I-Am, who pressures an unnamed character to nosh on a dish of… wait for it…  green eggs and ham. “I do not like green eggs and ham,” the character exclaims throughout the book, refusing to eat the odd meal. In the end, the anonymous character digs into the eggs and ham… and, well, you know.

Incredibly, screenwriter Jared Stern transformed this short story into a 13-episode series, drawing on central themes of the book and expanding them into a hybrid mismatched buddy comedy/road-trip story, all with the blessing of Dr. Seuss’s widow, Audrey Geisel!

With talkshow host Ellen Degeneres as an executive producer, the show is bound to be a hit with children — and parents!! — of all ages.

As it happens, there are some fun Jewish tidbits associated with the book and the series. Read on to see what they are!

1. The late Theodore Geisel wasn’t born Jewish, but he died as an honorary member of the tribe. In 1969 the mayor of Jerusalem, Teddy Kollek, awarded Dr. Seuss the title of “honorary Jew” for being an ally. Need a refresher? Kveller author Lela Casey writes that Dr. Seuss was public about his support for the Jews, and was possibly the first illustrator to “predict and denounce the fate of the Jewish people under Hitler.” Geisel’s most well-known gesture in this regard was his book, The Sneetches, in which the Star Belly Sneetches were marked with yellow stars to separate themselves from Plain Sneetches — an allusion to the yellow stars Jews were forced to wear during the Holocaust.

2. In Israel, Green Eggs and Ham is kosher! In 1982, Jewish mom and author Leah Naor translated Dr. Seuss’ books in Hebrew, and it’s delightful, according to our Lior Zaltzman. Naor changed the title to Not Hungry, Don’t Love It, and, incredibly — possibly crucially, as pork is not readily available in Israel — the ham is never mentioned by name!

3. The cast isn’t just star studded, it’s studded with Jews! Jewish dad Michael Douglas, 75, voices the character of Guy-Am-I, which is the heretofore unnamed character in the book is called in the Netflix show. In the series, Douglas’ character is an uptight inventor who, yes, despises green eggs and ham.

4. Jewish actress Ilana Glazer of Broad City fame voices EB, a curious, adorable young girl who just wants a dangerous animal as a pet. In an interview with MEA WorldWide, Glazer, 32, was asked if she’s worried the targeted children’s audience will search the actress online and discover her more scandalous Broad City character, Ilana Wexler. “I actually think it is powerful as a woman to embody pluralism. To be naughty, to be really sweet, to be wholesome, to be sexual to be non-sexual, I really hope that kids who grow up with me on Sesame Street, with me on Green Eggs and Ham, watch Broad City when the time is right for them. Because it is really a privilege to be able to occupy all those spaces as a woman.” Yassss, queen!!

5. Actor Daveed Diggs, who voices the character Mouse, is also Jewish! Why the odd spelling of his name? “‘David’ means beloved in Hebrew,” he told the NY Post. “They spelled it with two E’s because my dad liked the look of it.” (Also, we’ll note, it reflects the Hebrew pronunciation of the name, as opposed to the English Day-vid.)

6. Mike Karz, one of the executive producers of the show, is Jewish! You might know him from his work on fellow Jewish dad Adam Sandler’s romantic comedy Blended.