9 Surprising Facts About Purim You May Not Know 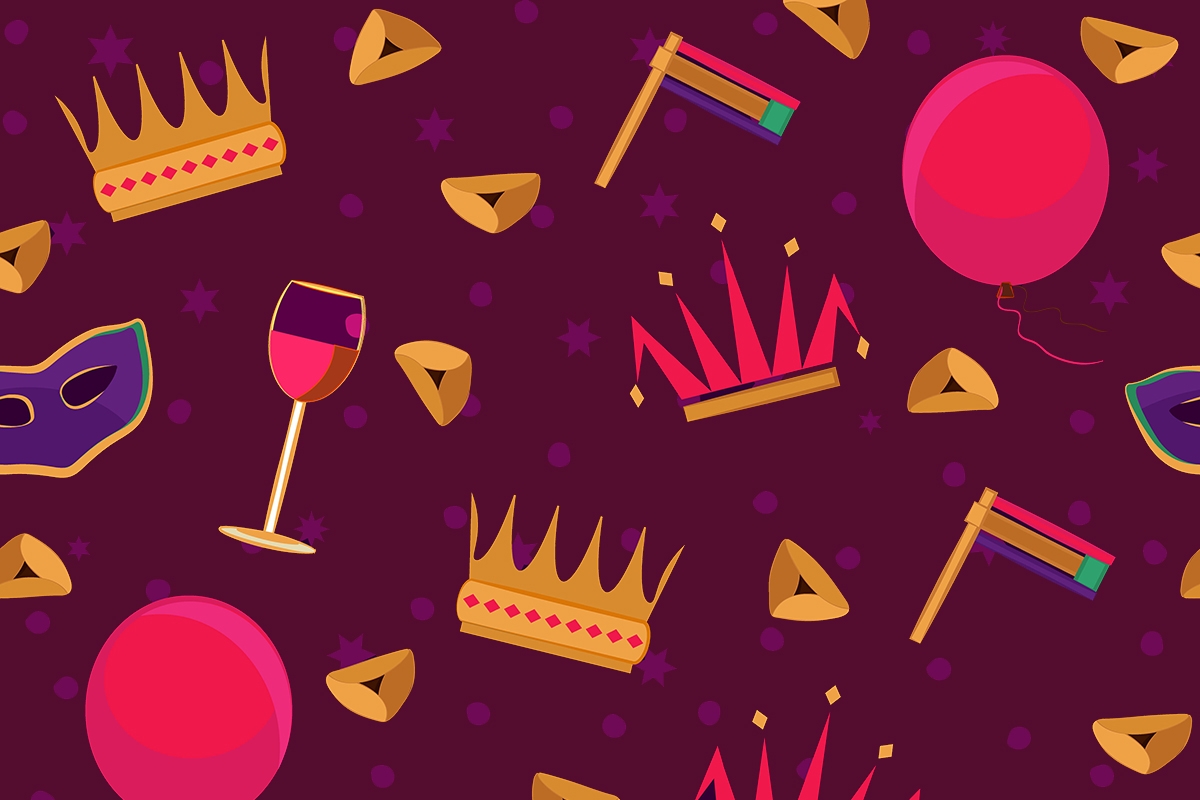 I’m definitely in need of a laugh right about now, and what do you know? Purim is here! Purim – an exceedingly joyous, fun, and humorous holiday — celebrates the deliverance of the Jewish people by Queen Esther from evil Haman’s plot of genocide.

Purim begins this year on the evening of Thursday, February 25. So, even as we stare down the second round of Jewish holidays in isolation, it’s a wonderful excuse to grab a costume, bake some unicorn hamantaschen, and party with your pod. (Though perhaps skip the grogger (noisemaker) this year — fellow moms, don’t we have enough ruckus in our homes already?!)

Ahead of this festive Jewish holiday, here are nine little-known facts about Purim.

1. The story of Purim is fiction…

It’s true: Scholars say the Purim story, recorded as the Scroll of Esther in the Hebrew Bible, should be read as a farce. As Biblical scholar Adele Berlin notes in her book,  Jewish Study Bible, the text is unapologetically false from the very first verse: “[King] Ahasuerus reigned over a hundred and twenty-seven provinces from India to Ethiopia.” (Yeah, right!) Although it is not particularly lengthy, the story is rather complex with many unpredictable and ironic plot twists, and it is certainly not rated PG.

Before we go any further, here’s a brief synopsis of the Purim story (and if you already know it, feel free to fast-forward the next three paragraphs):

Our story takes place in Persia, as our buffoon for a ruler, King Ahasuerus, immediately disposes of his first wife, Queen Vashti, as punishment for her lack of entertaining his drunken friends. He then chooses his next wife by arranging a year-long lavish beauty pageant. The lucky winner is Esther; she is Jewish, although keeps this secret. One day, Esther’s cousin and foster father, Mordechai, overhears two guards speaking outside the palace scheming to kill the king. Mordecai tells Esther to warn the king, thus saving his life!

Meanwhile, Haman, a descendant of Israel’s arch-enemy Agag, is the prime minister, and the villain of our tale. He took great advantage of his station and commanded everyone who entered the palace to bow to him. Mordechai refuses, as he is forbidden to bow to an enemy of his ancestors. This act infuriates our pointy-hat-wearing wicked man so greatly that he condemns the entire Jewish population to death, and casts pur (Akkadian for “lots” or “dice”) that fall on the 13th day of the Hebrew month of Adar. King Ahasuerus is manipulated to seal this proclamation, and when Mordechai finds out, he informs Esther and implores her to go before the king, stating that perhaps this was the true reason she became queen.

Esther is fearful to approach the king without first being summoned, explaining that it is an act punishable by death. She eventually conjures the courage to do so and, after two extravagant banquets arranged by Esther, she finally tells the king of Haman’s murderous intentions. Haman and his 10 sons are then hanged on the very same gallows intended for Mordechai and the rest of the Jewish population, and then there is a massacre of 75,000 enemies of the Jews. The holiday of Purim is declared to be observed on the fourteen and fifteenth days of Adar, and is to be a joyous celebration of “feasting and merrymaking.” Mordechai takes Haman’s place as the king’s right-hand man, and they all lived happily ever after!

It’s a great story — but, alas, it’s fiction. In addition to historic inaccuracies, the plotline is full of exaggeration and irony. For example, the story begins with a banquet lasting for 180 days (!), and Haman is eventually hanged on gallows built (at an excessive 75 feet high!) for Mordechai.

The Purim story was written about 2,300 years ago and is flamboyant, outrageous, and downright hilarious. The obvious question must be asked: Why is it so important to study a fictional story that is essentially burlesque? Well, as Berlin notes, the Hebrew Bible is an all-inclusive life manual for the Jewish people, providing laws, morals, and even humor to its students. Jewish life is full of happiness, so perhaps the opposite question is more appropriate: How could comedic material be absent from our Source?

Here are a couple of my favorite comedic examples in the text: King Ahasuerus is advised in the Scroll of Esther 1:17 to banish Queen Vashti for not obeying him for “the queen’s behavior will make all wives despise their husbands.” Or Esther 7: 1-10, when Haman is begging Esther to spare his life, the king enters the room and misinterprets his kneeling for sexual advances. This is starting to sound like a highly bingeable Netflix show, amirite? It was my idea first!

3. The Purim story was written after the holiday existed.

Biblical scholar Marc Zvi Brettler, among others, argues in How to Read the Jewish Bible that Jews were already observing this festive holiday — Megillat Esther (Scroll of Esther) is included in the third section of the Hebrew Bible, in Ketuvim (Writings), simply to legitimize and ensure its survival. The recording of this story has paved the way for other Jewish holidays to be celebrated that are also not included in the Torah.

4. The word Purim is half Hebrew, half Akkadian!

As we established, pur is an Akkadian word that refers to the throwing of lots to determine an outcome. When Haman was deciding what day he would murder the Jews, he cast pur, which fell on the 13th day of the Hebrew month of Adar. Linguistics scholar Joel M. Hoffman teaches that the word “purim” is the Hebraic pluralization of the non-Hebrew word pur.

In the book’s final reversal —  Haman’s death instead of Mordecai’s — we read in Esther 9:26: “For that reason these days were named Purim, after pur.”

5. The Scroll of Esther was written for Jews living outside of Israel.

The setting of our story is in Shushan, Persia (modern-day Iran), where the Jews were a minority people and therefore faced challenges in observing the laws of the Torah and taking pride in their Jewish identity. This story speaks directly to Jews in the Diaspora —  we, like the Jews of Shushan, understand the everyday rewards and hurdles of maintaining our culture, beliefs, and traditions when the majority does not share them.

In fact, some scholars believe this story was actually written by the Diaspora community. The characters in the story even have both secular and Hebrew names, just like many of us have Hebrew names (for example, Esther’s Hebrew name is Hadassah). The Scroll of Esther is one that gives hope to Jewish people all over the world who read the story every spring.

6. God is not mentioned in the story.

Considering this story was canonized in the Hebrew Bible, this omission is quite surprising. Just why is God’s name missing from our tale? Well, as always, there are many theories on this, but my favorite comes from Israeli philosopher Yoram Hazony:  The ancient Purim story relates to our relationship with God in modern times. God does not perform miracles in this story but God’s presence can be felt; when facing persecution, it’s up to the Jews to save themselves. Esther (a woman!) heeded the call to action and delivered her people from destruction. This again speaks to Jews of the Diaspora: If the Jews are willing to fight to protect their way of life, they can feel empowered by their own courageous actions and not wait for divine intervention.

7. There are four laws Jews must observe on Purim, and dressing in costume is not one of them!

The four halachot (laws) associated with Purim come directly from Esther 9:21-23: to enjoy a seudah or feast in the afternoon (seriously?!); to read/hear the chanting of Megillat Esther; to give mishloach manot, the exchanging of small gifts and treats with friends and family; matanot le-evyonim, or giving presents to the poor. Eating hamantaschen, reusing your Halloween costumes, winning a goldfish at the Purim carnival, and roasting the clergy in your annual Purim spiel (play) are fun traditions, but traditions nonetheless.

8. The Talmud suggests a rather interesting way to celebrate Purim.

Purim is associated with the enjoyment of alcoholic beverages. This idea is shockingly found in the Talmud Megillah 7b, suggesting one should become so intoxicated that they can no longer distinguish Mordechai from Haman. I had heard of this rumored tradition as a Jewish youth group member, but was astonished to discover its truth! Over the centuries, the rabbis grew uncomfortable with this Talmudic passage, and have since encouraged their congregants to celebrate responsibly.

9. The triangle-shaped cookies we eat have a different name and meaning in Israel

Those triangle-shaped cookies — typically filled with jam or poppy seeds — are usually known as hamantaschen, which is Yiddish for “Haman’s hat.” In Israel, however — where you’ll find some of the most scrumptious and creative varieties of this three-pointed treats — you must ask for oznei Haman, which means “Haman’s ears.”

May we all be able to celebrate Purim together next year. In the meantime, Chag Purim sameach!