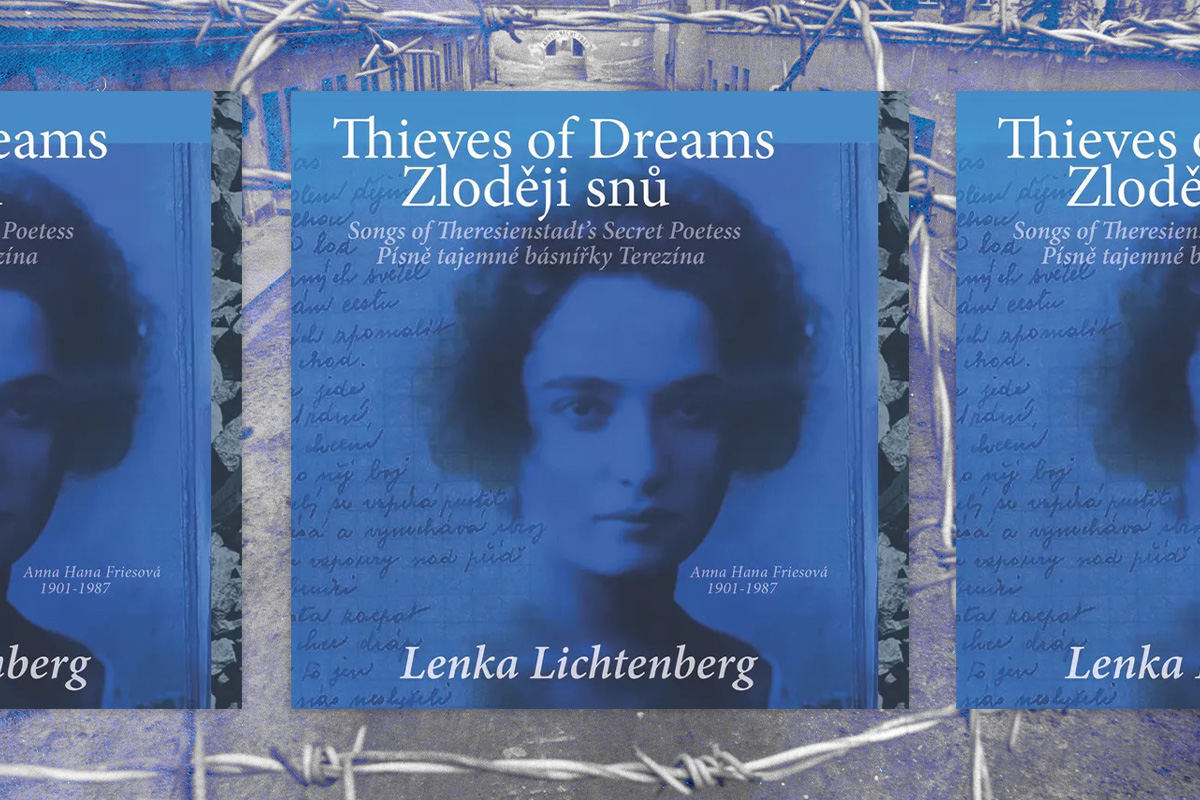 On her website, Czech-Canadian Jewish singer Lenka Lichtenberg writes, “My maternal grandmother Anna Hana Friesová was an accomplished artist both with a pen and a brush, and nobody paid attention.”

Now, Lichtenberg is forcing you to pay attention.

“Thieves of Dreams: Songs of Theresienstadt’s Secret Poetess,” Lichtenberg’s latest album, turns the poems Friesová, a Holocaust survivor, wrote while imprisoned in Theresienstadt concentration camp into lyrics. What results is hauntingly beautiful music which speaks both to the horror and grief of the Holocaust and to the enduring, hopeful resilience of the women in Lichtenberg’s family.

Very symbolically, Lichtenberg released the album on May 8, 2022, the 77th anniversary of Theresienstadt’s liberation.

The album could very easily not have happened, however.

In 2016, after the passing of her mother (who also survived Theresienstadt), Lichtenberg  discovered, by chance, two tattered, hand-written notebooks in her mother’s apartment. Inside were Friesová’s poems, which Lichtenberg had no idea existed. While some of the poems give insight into the trauma and pain of concentration camp life, featuring verses verses like “With the last tear, the final darkness tumbled down / And God couldn’t see our faces. / The end fell into our eyes like a stone onto a mirror,” the majority of the poems focus on themes of love, relationships and dreams of post-Holocaust life.

With a team of seven Czech and Canadian composers, Lichtenberg developed these words into English and Czech lyrics. As Friesová’s poems span genre, so too does “Thieves of Dreams,” with songs that incorporate string sextet, beatboxing, spoken word, jazz and a cappella.

In telling her grandmother’s story, Lichtenberg also found a deeper connection with her Jewish heritage.

“I only learned that I was Jewish at the age of nine, when I was invited to perform at the Prague Jewish Community Center. My mother finally told me about our heritage. She saw being Jewish as a burden, [a] risk of becoming a victim of antisemitism,” Lichtenberg told an interviewer, “For me, embracing my family’s heritage was, at first, an act of defiance, and then a way of loving and honoring my roots through learning, creating, and sharing my Czech, Yiddish and cantorial music.”

Through this act of defiance, Lenka Lichtenberg has created a seemingly unforgettable tribute to her Jewish mother and grandmother, to which we say: l’chaim!