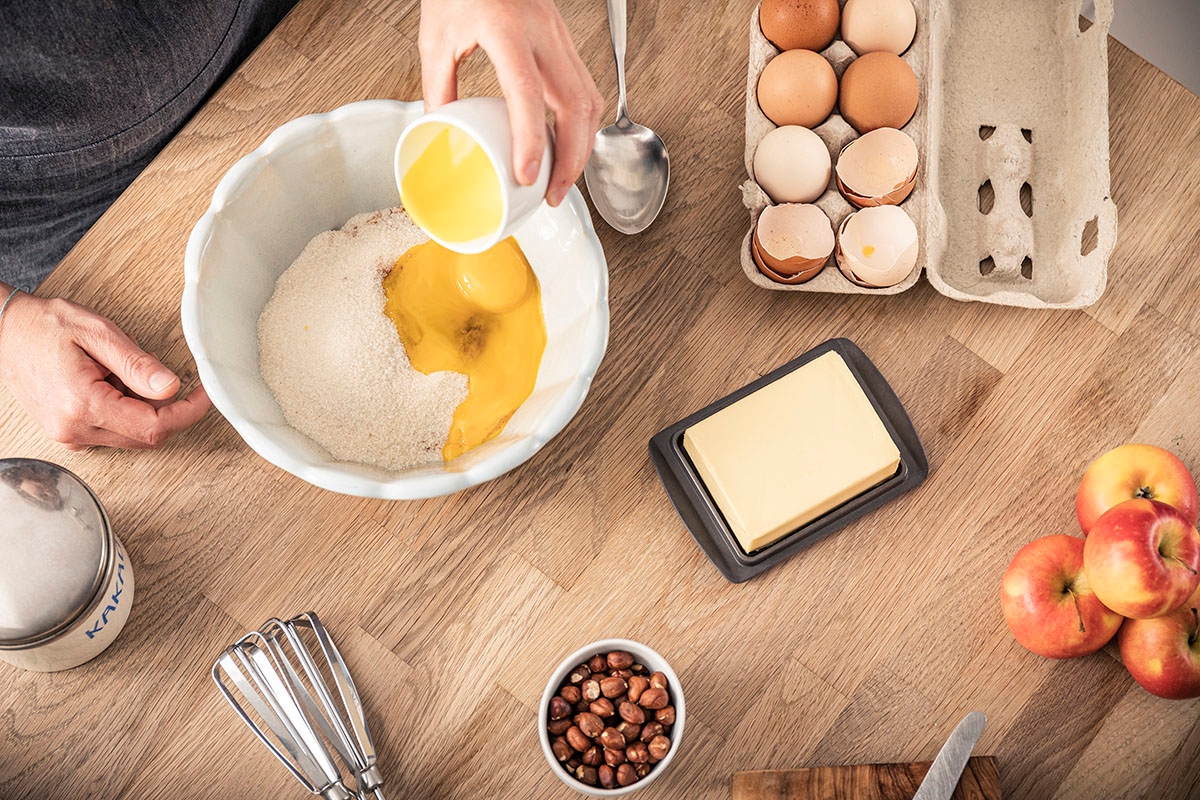 “I’m going to bake an apple cake,” I announced to my family. It was the night before Rosh Hashanah last fall, and we were reeling from the news that Ruth Bader Ginsburg had died.

My youngest daughter, then age 10, wrinkled her nose. Crumpled in defeat over losing one of her two favorite Supreme Court Justices — the other being Sonia Sotomayor — she lifted her head from the tearstained couch pillow. “Yuck.”

Everything was terrible; there was no comfort to be had and apparently I had the audacity to veer away from chocolate. “Come on, let’s try it,” I urged. “I found a new recipe that looks really delicious.” I pointed to where the recipe was still up on my computer screen. She leaned forward to scrutinize the featured photo.

“We will eat fresh apple cake and remember RBG,” I whispered to my daughter. She nodded.

My mother bakes; my grandmother before her baked. In the long tradition of Ashkenazi Jews, mothering and feeding are entangled. An invisible rope woven of flour, sugar and butter tethers me to my ancestors, including my great-grandmother, who escaped on a boat from Russia and sought religious freedom in America.

My family bakes cakes because we are survivors. We bake cakes for celebrating, cakes for mourning. Cakes for the trivial details and momentous occasions of our lives, marked by fillings and frostings. If you cut me open, my years will be numbered in layers of cake.

My grief-stricken child slept, and when the morning dawned, sunshine drenched our kitchen in a renewal of spirit. Natural curiosity spurred my daughter to climb onto the counter, watching as I peeled, cored and chopped ruby red apples. We placed the bowl of apples aside and returned to the recipe.

Using the backside of a wooden spoon, my daughter pressed down on a mound of brown sugar. The hidden space between each granule compressed and tightened, leaving room for one more — and then one more — shake of sugar from the box, sticky bits now crunching under my feet.

“It’s like adding members to a family,” I said. “The heart always has room for a little more.” We both inspected the packed cup. Still not full.

“I want to have three kids,” she proclaimed. “And I’m going to be a Supreme Court Justice, maybe Chief Justice. And I’ll bake chocolate cakes with my kids every week for Shabbat dinner.” I smiled at her.

The cake called for four eggs. “Can I crack them?” she asked as she reached for the carton, stretching from her perch on the counter. “It’s my favorite part.”

“Wait.” I lined the eggs up on the granite, hesitant to break their oblong perfection — how could I destroy the potential that is an egg? Once cracked open, its secrets spill forth.

I thought of the four children that have been mine, how each started in an egg, whole and unbroken, perfect.

My first baby, exploding into my consciousness with such excitement, his existence was announced definitively with the blinking of his heart on an ultrasound. How strange that the competent DNA encoded in that egg — which prompted the baby to suck his thumb and kick his feet — was the same architect in charge of building his ruined kidneys, determining that he would never live outside the safety of my womb.

It is astonishing, really, the agony and despair and love and grief that can be written inside one egg.

A second egg, holding the story that would become my second baby. It was not my DNA that told this egg how to divide and multiply, nor my womb that cradled her. I was not her first home, nor her second — her foster mother nourished her as a newborn chick and I gathered her into my arms when given the chance.

She is here and she needs the ingredients to grow, and we have cupboards overflowing. Yet, there are mysteries to her. She tells us when we get the recipes wrong — which is often, especially with an 18-year-old — and we try again. She is her own master chef; she combines nature and nurture on her terms, synthesizing history and experience to create a different cake than the one she was told to bake. “Try this,” she tells me. “Is it good?”

“Yes,” I reply, answering the question she is really asking. You are good. You will always be good enough, no matter what the world says or does to you.

Perhaps the most unexpected of all was the third egg. It almost broke in my womb, nearly suffocated under bilateral pleural effusions. And yet a baby emerged, alive and lovely and intact. The story this egg contains is still new, still unfolding — the child we thought was a daughter is undergoing the painful and glorious process of metamorphosis.

Deep within the layers of the cakes we eat together, it is written, I am sorry for how hard your life is right now. And in the frosting, it is piped, You are my child, and I will fight until my dying day for your right to live and love with joy.

My youngest tugged at my sleeve. I looked over my reading glasses at her, the fourth egg-baby, now a bright child topped with freckles and curls, a bud on the cusp of blooming into a flower.

I handed her the eggs. She cracked them one by one, and I scooped bits of shell out of the batter with a spoon.

While the cake baked, I prepared the glaze — a melted concoction of butter, vanilla extract, brown sugar and cinnamon. Upon removing the cake from the oven, the recipe instructed me to poke holes with a knife all throughout the bottom of the cake and pour the glaze into the holes.

“Will you video me pouring the caramel in?” I asked my husband. I texted the video to my three sisters and my parents. They replied with drooly emojis and “OMG, yum!”

My little helper — who had run off to sculpt a tiny layer cake out of polymer clay for her dollhouse bakery — popped in. “Is it ready?” she asked. “It smells amazing.”

“Not yet. It needs a few hours to cool and set.”

Finally, it was time to plate the dessert. I turned the pan over and anticipated the gentle weight of the cake sliding out of the pan. Nothing. I slid a spatula along the outer edges to break the seal. Still nothing.

It was a fragrant, mouth-watering disaster. My cheeks grew hot. “Well, it failed,” I confessed to my parents and sisters.

“It happens to all of us,” my mom, a skilled baker, responded.

“It even happened to Grandma,” my dad texted, reassuring me that I am connected through a long and fraught line of freshly baked cakes, rich with goodness though sometimes crumbled and ugly, to nourish us for the onslaught of hardship and despair that awaits women and their daughters.

There was nothing to do but eat the ugly apple cake. I abandoned plans to adorn it with powdered sugar and crystalline flowers. “I followed all the steps,” I lamented to my family. “It was supposed to turn out perfect.”

My oldest grabbed a spoon and scraped some cake out of the pan. Her eyes widened. Like seagulls, the rest of the family swooped in, snatching tastes. The middle one shoved in mouthfuls of cake, ravenous, laughing and eating, head thrown back in delight, and turned to me.

I looked at my family, flocked together and content in the kitchen, the remains of the apple cake scattered across the counter. Things hadn’t come out as I expected — they usually don’t — and yet the sweetness created its own version of perfect. Hope was in that moment.