A Jewish Anti-Racist Reading List for Children of All Ages 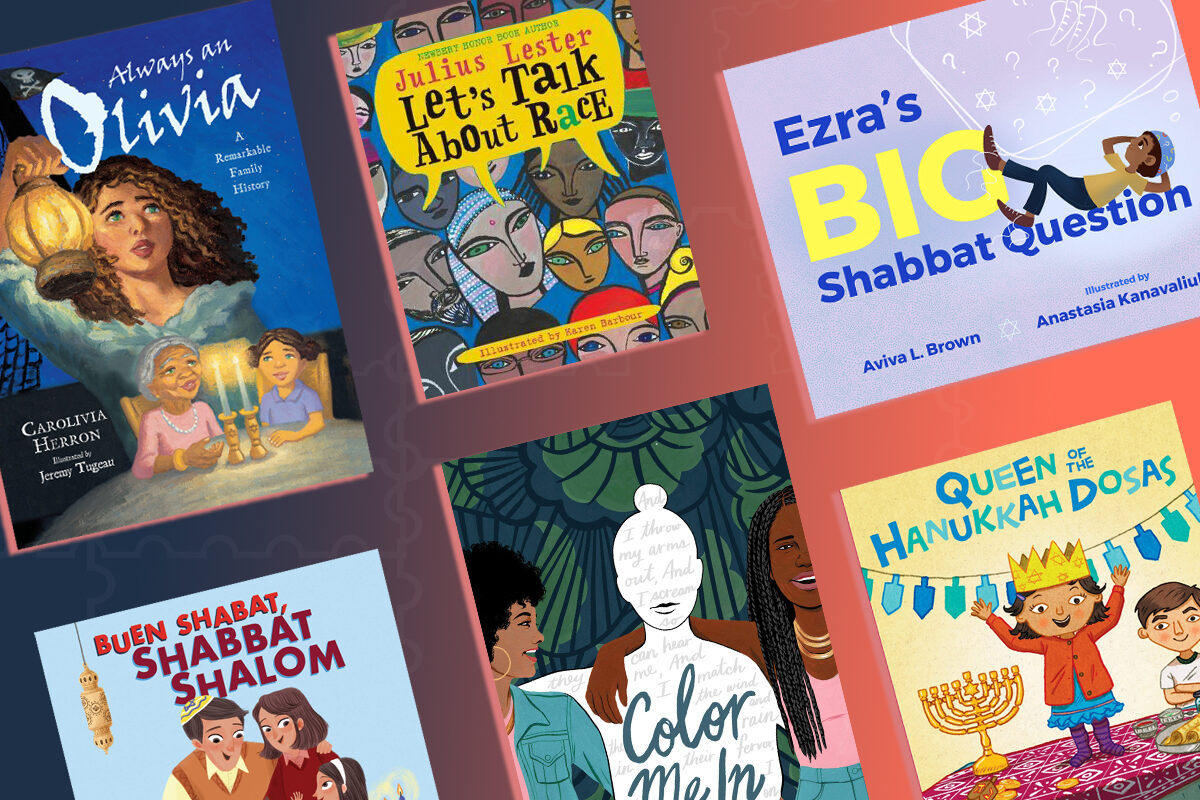 This moment has many of us reeling. Honestly, for those of you who are, like me, white-presenting Jewish parents, we should consider this a time of reckoning. Are we doing enough to make our homes anti-racist? What about our communal Jewish spaces?

The work to dismantle racism goes beyond what we do when people are out in the streets protesting. And the activism we do outside of our home is just as important as the one we are doing inside our homes with our families, and especially, with our kids.

Our kids perceive race much earlier than we think we do. So we have to start the work early. Raising your kids with a “colorblind” mentality just doesn’t work — because we aren’t, and the world we live in most certainly isn’t colorblind.

In the New York Times, Dr. Marietta Collins, a clinical psychologist and the co-author of Something Happened in Our Town: A Child’s Story About Racial Injustice, a book for children about a police shooting, suggests that those first conversations about race be positive. As the article explains, “Dr. Collins gave the example of a white child asking why another child had brown skin. A parent can take this opportunity to explain what melanin is, and to talk about how wonderful it is that the world has so many different kinds of people.”

The truth is, if you want to raise anti-racist children, the work starts with us, the parents — specifically, white, and white presenting Jewish parents. After all, we lead by example. Examine the biases that you were raised with and are still in your ears. This isn’t a finite process — or an easy, or a comfortable one — and we have to learn to live with that discomfort. But there are a lot of great resources out there.

As always, it is key to listen to Black voices. Educator Brit Hawthorne, who is an expert in anti-racist education, is a wonderful resource, as is Tiffany Jewel, who wrote the great This Book Is Anti-Racist — and who actually does 15-minute consults on how to raise anti-racist kids. (Remember, supporting Black artists, writers and businesses is also important at this time!)

Certainly, diversifying your children’s book collection — and specifically, your Jewish children’s book collection, is one good step. These shouldn’t all be books about struggles for equity. Showing happy, diverse Jewish kids celebrating your kids’ favorite holidays is just as important. They show your kids that the world — and specifically, the Jewish world  — is diverse. And for Jews of Color, these books show them that they belong.

Since some of these books are hard to get, we’ve included the Amazon links for some of them — but whenever possible, we encourage you to get these books at Black-owned bookstores.

The Snowy Day and other Peter Books by Ezra Jack Keats

The Snowy Day was the first mainstream children’s book to feature a Black main character, the lovable and delightful Peter. The book doesn’t mention race and it isn’t Jewish, but its iconic author, Ezra Jack Keats, was a Jewish immigrant who changed his name because of persecution. If your kids are big fans of Ezra Jack Keats, you can read them A Poem for Peter: The Story of Ezra Jack Keats and the Creation of The Snowy Day, a book all the making of this groundbreaking book.

This book shows the faces of a diverse Jewish congregation, and it also tells the story of how and why Shabbat is celebrated. It’s available on Kindle, so you can read it with your kids right now!

My toddler and I love this book about a Sephardi family celebrating Shabbat. Written by the fabulous Sarah Aroeste, the book is both musical and lovely — and a great opportunity to expose your kids to Ladino and Sephardi culture.

Written by Kveller contributor Aviva Brown, Ezra’s BIG Shabbat Question came to be when Brown saw there weren’t enough Jewish books that depicted families like hers. In this adorable book, Ezra wants to know if he can perform a certain action during Shabbat. He goes to his rabbi to get the answers but comes out with even more questions! Honestly, is there anything more Jewish than that?

Award-winning children book author Julius Lester’s 2005 book stars with Lester telling us his own story: where he was born, what he loves to do, and that he is Jewish and that he is Black. (“There’s something else that’s a part of my story,” he writes. “It’s part of yours, too. That’s what race we are. I’m Black. What race are you?”) While the book reminds us that we are all skeletons underneath, it also urges us to inquire about the story of every person we meet and reminds us that race is a part of that story.

The Color of Us by Karen Katz

“When my daughter was 5 years old in kindergarten she asked why she was a different color than my husband and me,” Karen Katz, the book’s writer, and illustrator says. “She is adopted from Guatemala. We talked about it. The next day I was at her school looking at all the beautiful kids in her class and I thought. These kids are brown and tan and peachy they aren’t just black or white. It was then I decided to do do this book as a celebration of the beautiful colors of kids.”

Joey finds a way to celebrate his Mexican and Jewish heritage in quite possibly the most delicious way possible: by making jalapeno bagels. (Yum!) This beautifully illustrated book teaches some Yiddish and Spanish words, too.

Queen of the Hanukkah Dosas by Pamela Ehrenberg, illustrated by Anjan Sarkar

This book features a multicultural Jewish and Indian family celebrating Hanukkah, and starts one curious and perky little girl! It’s a delight.

Always an Olivia by Carolivia Herron, illustrated by Jeremy Tugeau

In 1947, a biracial Jewish kid with a passion for baseball faces alienation in both his African American community and in the Jewish community of Brooklyn.

David is preparing for his bar mitzvah, dealing with the drama between his Jewish grandma and his Chinese grandma, and… building a fallout shelter? A fun story about growing up Chinese and Jewish.

This is a coming-of-age story about Suzette, who is Black, Jewish, and bisexual, and her relationship with her stepbrother, Lionel, who has bipolar disorder. As Lisa Borten writes for our sister site, Alma: “The intersectionality and emotional honesty in this book are unmatched, and anyone looking for a realistic portrayal of mental illness and well-developed characters will enjoy this book.”

A young Cuban Jewish immigrant to America adjusts to life in New York City while dealing with the aftermath of a terrible car accident in this dramatic coming of age tale.

Color Me In by Natasha Diaz

As Emily Burack writes for our sister site, Alma, Color Me In “is a coming-of-age story of Navaeh Levitz. Navaeh is a Black Jewish teenager whose father forces her to have a belated bat mitzvah at age 16. Navaeh’s parents are in the midst of a divorce, and the bat mitzvah is her father’s way of having her stay connected to his family. Meanwhile, Navaeh is struggling to figure out her identity, her relationship to her blackness, her privilege, a blossoming relationship, and her family. It’s a compelling and timely read.”