This Video of Mel Brooks, His Son, and His Grandson Must Be Seen – Kveller
Skip to Content Skip to Footer 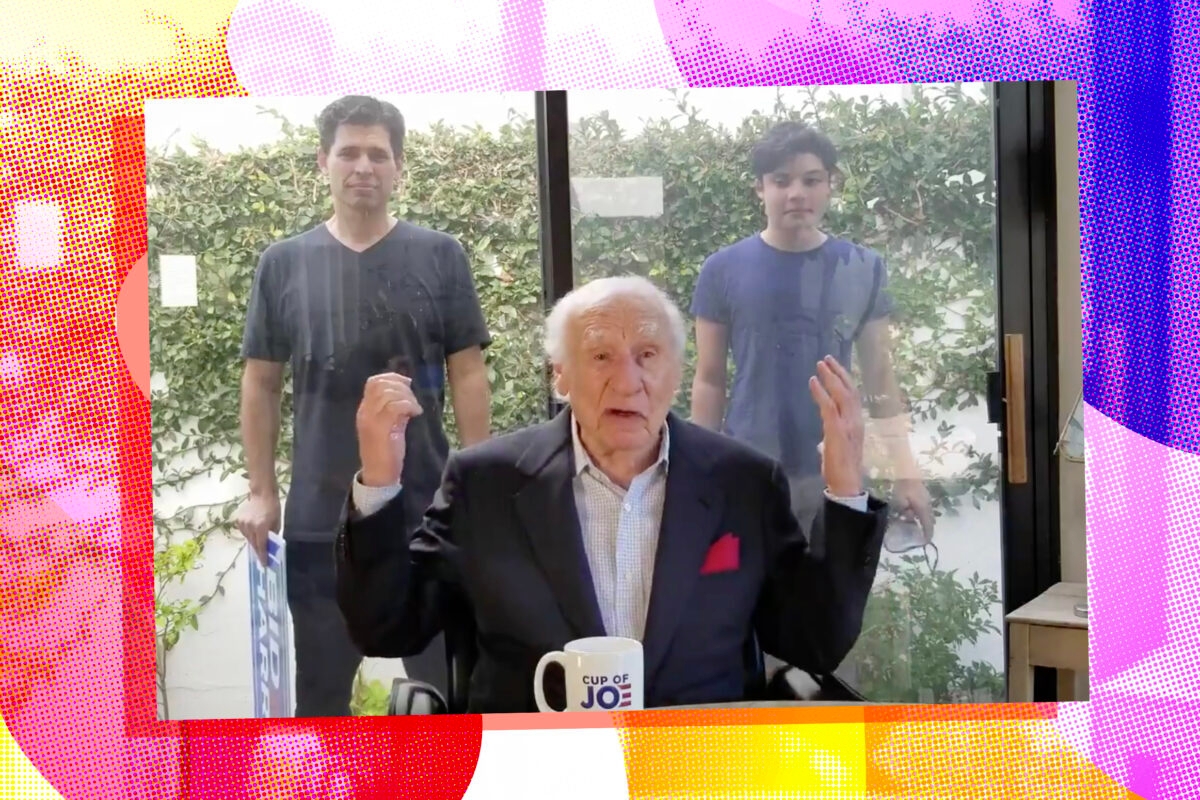 In a brand-new video, three generations of Mel Brooks’ family have assembled together on camera — and, honestly, we can’t with how adorable and impressive this family is.

Brooks; his son, Max Brooks, 48; and grandson, Henry Michael Brooks, 15, all got together to shoot Mel’s first-ever political video. The 94-year-old national treasure appears on camera in his home, with a Joe Biden mug in front of him, wearing a suit jacket with a signature red handkerchief in his pocket. His grandson and son are standing on a patio behind him, separated from their patriarch by sliding glass doors.

“I’m Mel Brooks, and behind me, you see my son and my grandson,” Brooks tells viewers in the video, which was posted by his son on Twitter. “And they can’t be with me. Why? Because of this coronavirus. And Donald Trump’s not doing a damn thing about it. So many people have died. And when you’re dead you can’t do much. So I’m voting for Joe Biden. I like Joe. Why do I like Joe? Because Joe likes facts, because Joe likes science. Joe will keep us going. Take a tip from me, vote for Joe.”

“OK, that’s all I’ve got to say,” he ends the video. He then turns to his kin and says: “OK, you can leave, thank you, thank you, OK, see you soon.” The two younger Brooks boys walk away. “I gotta fill out my ballot, see you later, bye-bye” he explains, then the video ends with a blue screen promoting I Will Vote, an organization that provides voting information.

“Bye dad, love you,” you can hear Max say after the end of the shoot. “I love you too. That was good,” the eldest Brooks says.

My father, @MelBrooks, is 94. He has never made a political video. Until now. #MelBrooks4JoeBiden#BidenHarris#GrassrootsDemHQ pic.twitter.com/yQZhopSbNV

There are so many lovely details in the video, from Max — who does his best to keep a straight face, cracking a smile when Mel jokes about not being able to do much when you’re dead — to Henry nodding along approvingly when Mel mentions Joe Biden, to the adorable dog that follows Max and Henry, wagging its tail, when they exit the shot. Honestly, we just need more of this family!

This isn’t the first PSA the Brooks have shot together. Back in March, Max shot a PSA asking people to adhere to social distancing, also from outside his father’s home. “If I get the coronavirus I’ll probably be OK, but I give it to him,” Max says, motioning to his father through the glass door, “he can infect Carl Reiner [may his memory be a blessing!], who could give it to Dick Van Dyke, and before I know it, I’ve wiped up a whole generation of comedic greats.” The video ends with Max encouraging viewers to think of others they can infect, and not be spreaders.

A message from me and my dad, @Melbrooks. #coronavirus #DontBeASpreader pic.twitter.com/Hqhc4fFXbe

Max Brooks, of course, knows a lot about great national disasters like the terrible pandemic we’re currently living through  — he’s the author of the best-selling World War Z and the new Devolution (as well as a Minecraft book, for all you parents of kids of a certain age.) He made that point in a recent video in which he endorsed Joe Biden, shot for the organization Jews Defending American Values, along with another very famous Jews: Billy Crystal.

Max often talks about how wonderful it was to be raised by an amazing person like Mel Brooks — though not necessarily for the reasons you think. In a recent piece for Men’s Health magazine, he wrote that it was actually Brooks’, rather Corporal Mel Kaminsky’s, experience as a WWII vet that inspired him, and taught him the most about life and about being a parent.

Through his father’s anecdotes from WWII, he learned “the world can be a very hostile, dangerous place,” he wrote. “Even in the best of situations, that world would never love me like my parents did. I learned that I would need survival skills to make it outside the bubble of my bedroom.”

“Of course, I don’t teach my father’s exact, Nazi-fighting lessons to my son (although the Nazis do seem to be making a comeback these days),” Max admits in the piece. “It’s the lessons behind the lessons, the larger themes that I’m so grateful for.”

We love this family of mensches!