A Talmudic Analysis of the Tot Shabbat Classic, 'There's a Dinosaur (Knocking at My Door)' – Kveller
Skip to Content Skip to Footer

A Talmudic Analysis of the Tot Shabbat Classic, ‘There’s a Dinosaur (Knocking at My Door)’ 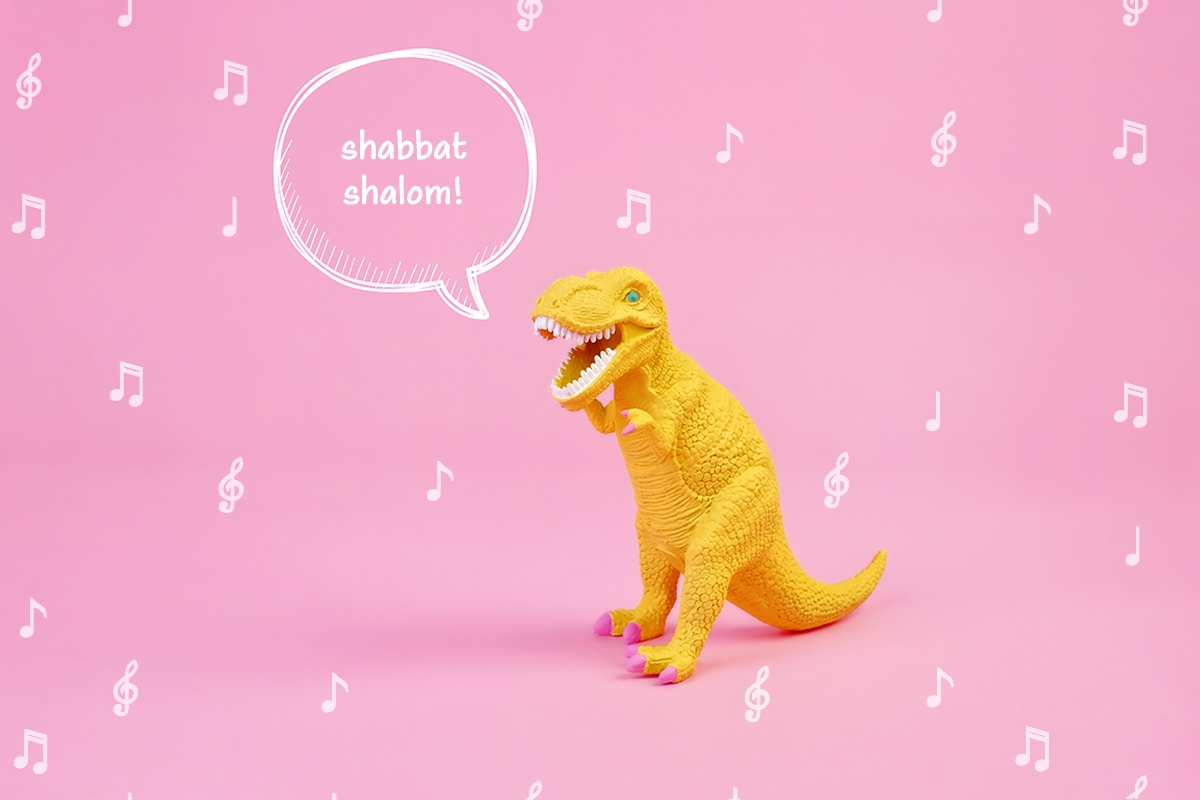 In “The Essential Talmud,” Rabbi Adin Steinsaltz z’l notes that “the Talmud treats abstract and totally unrealistic problems in the same manner in which it refers to the most prosaic facts of everyday life.” Given this approach, “no subject is too strange, remote, or bizarre to be studied.” Like, perhaps, a dinosaur knocking at your door on Shabbat.

Children’s music composer and performer Linda Arnold released “There’s a Dinosaur Knocking” in 1989. It became wildly popular, and at some point, Andi Joseph and Mimi Greisman transformed it into a Tot Shabbat standard.

I first heard this tune in 2014 while living abroad in Italy and streaming a liberal service in the United Kingdom best aligned with our time zone, age range (my daughter was 1 at the time) and language requirements. Perhaps foreshadowing the “Peppa Pig” fixation soon to enter our home, I thought the Shabbat song about a dinosaur was a quaint British curiosity. However, once we returned to the United States and enrolled our daughter in a Jewish preschool and began attending in-person Tot Shabbats around Los Angeles (and later, New York City), I learned that “There’s a Dinosaur” was a Jewish-American childhood staple as omnipresent as long-beloved “Bim Bam.”

Now I recognize that many toddlers love dinosaurs (I am personally grateful that my children landed on different obsessions and that I was never forced to memorize the various species and their respective periods and epochs), but this song’s ubiquity was at the time — and still remains — a bit of a headscratcher. Isn’t the Jewish kids’ canon deep enough and growing richer every year — do we really need to put a dinosaur on it? Or am I just a cranky Xennial not of Generation Barney who’s looking for a fight? Where could I turn to hash out this problem?

While the Talmud never directly addresses the subject of dinosaurs, a Mishnah commentator contemporaneous with the discovery of the first fossils had some thoughts on how they could be reconciled with the traditional creation stories in Genesis. Rabbi Israel Lifschitz, author of the “Tiferet Yisrael,” asserted that the fossil record supported the Kabbalistic idea that God took several swings at fashioning the world before landing on the current version. So given this close-enough rationale, and with sincerest apologies to people with deeper knowledge of the Talmud (and all the children, teachers and caretakers who love the song as well as its original composer and adapters), I offer an imagined daf (page of Talmud) on “There’s a Dinosaur (Knocking at My Door).”

Commentary 1: If the dinosaur is knocking, can we assume that he has hands — perhaps tiny T-Rex hands? And if he has hands, can he wash before the challah?

Does he ever stop knocking to come in and actually light, bless and eat? Or does the act of knocking continue, merely a figment of the imagination of the child who may be longing for a guest who’s a bit more interesting than those her parents tend to ask over?

Commentary 2: “Dinosaur” derives from the Greek of deinos (terrible) and sauros (lizard). We seek to welcome the Sabbath bride — not the Sabbath bridezilla — each Friday evening. Opening the door is a truly terrible idea.

Commentary 3: While the original text reads as though the male dinosaur has already been invited for Shabbat, another slightly different version makes the dinosaur female and seemingly still angling for an invitation: “And she wants to have Shabbat with me” replaces “And he’s come to have Shabbat with me.” In this second version the dinosaur is described as wanting to light the candles, wanting to drink the wine and wanting to eat the challah, and importantly, “She does it all the time.” There’s a strong implication here that this second dinosaur is a committed Shabbat celebrant; however, it’s unclear if she’s always celebrating Shabbat with the unnamed —  presumably human — occupant behind the door or if “she does it all the time” wherever she is, perhaps by knocking at a different mezuzah-bearing door each Friday evening and hoping for the best.

Commentary 4: Yet another version (we really can’t help ourselves, can we?) mashes up “There’s a Dinosaur” with “Bim Bam.” This time the dinosaur (in this case a he who “wants to have Shabbat”) and the host make sure, in keeping with the centuries-old tradition of piyyutim (religious poetry), that their activities end in a lyric approximating a rhyme: “First we light the candles, and then we drink the wine, and then we eat the challah, and now it’s Shabbat time.”

Commentary 5: Jewish lore and law are filled with opportunities (Shabbat, Sukkot, Passover) to welcome guests, whether they are Jews or non-Jews, honored pillars of the community or strangers in need of a warm meal and heartfelt conversation. The primary version of the song elevates these important mitzvot and teaches them to our children through a catchy tune. The second version, which doesn’t explicitly mention a meal, sounds more like a quickie grab-and-go oneg.

Commentary 6: Children love dinosaurs. Ergo, singing a song about dinosaurs at each and every preschool, community and synagogue Shabbat will make children love Shabbat. Have we thought about incorporating dinosaurs into the Shemini Atzeret or Shavuot liturgy?

Commentary 7: In the immortal words of George Pig, “DINE-SAW!”