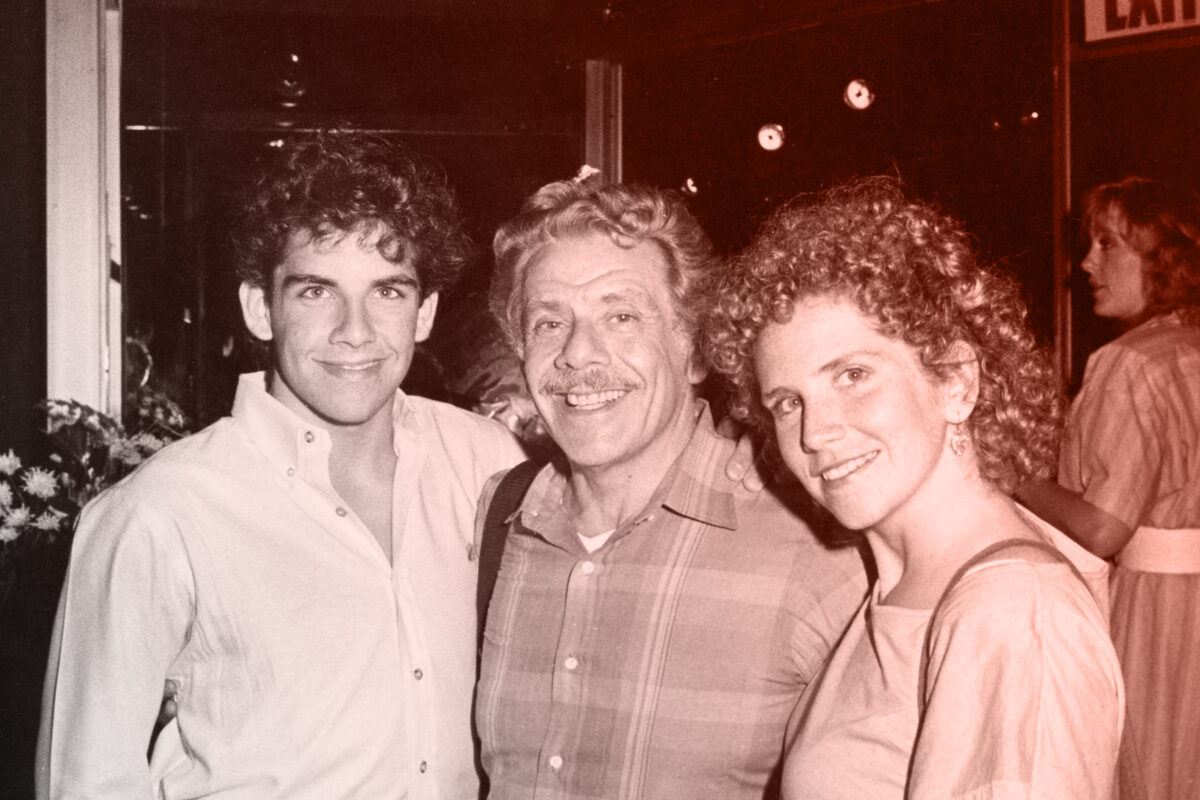 Jerry Stiller, who died on May 11 at age 92 from natural causes, was an unforgettable comedic talent. Beyond the hilarious roles that he’ll always be remembered for — most notably as George Costanza’s father, Frank, on Seinfeld — he was, above all, an extraordinarily loving Jewish dad of two.

Gerald Isaac Stiller had a profoundly Jewish upbringing in Brooklyn and, later, the Lower East Side. His mother’s family came from Frampol, Poland —  where Isaac Bashevis Singer also hails from. His father immigrated from Galicia and became a taxi driver, and later a bus driver, in New York. He was also a lover of vaudeville and took his young son to see shows.

Stiller’s parents had a contentious marriage — one that he later mined for content in his various roles  — though Judaism was an escape. He recalls crashing Passover dinners (since his family couldn’t afford to host their own) and his uncle taking him to a Hanukkah service at a local synagogue to escape his parents’ arguments. “I remember we entered this Orthodox shul and all the beautiful candles in the menorah were lit and there was such a feeling of happiness,” he said. “It was a modest old synagogue, nothing fancy, just people and they sang happily. And that was my first memory of Hanukkah.”

As a student in Seward High School in the Lower East Side, where Zero Mostel and other famous comedians also attended, one of Stiller’s first acting roles was playing Adolf Hitler. “The show was called ‘Hitler Goes to Heaven’,” Stiller told EmmyAwardInterviews, and he “got a lot of laughs.”

His rise to fame started as an act of love. Stiller and his unlikely girlfriend — and later wife of 60-plus years — Anne Meara, a tall, redheaded Irish woman, created a comedy act based upon their opposites-attract relationship.

Stiller and Meara, as the duo was known, became a household name in the 1960s. They were frequent guests on the Ed Sullivan Show (their debut performance was pretty Jew-y: a modern retelling of Jonah and the Whale) and they performed in Las Vegas and appeared in successful commercials. Even if their audiences were neither Jewish nor Irish, many couples who came from different backgrounds related to their story. At a time where intermarriage was still largely considered taboo, the two gave so many the laughter and validation they craved.

Notably, while Meara, who passed away in 2015, kept her last name, she did convert to Judaism before their children — Amy, 58, and Ben, 54 —  were born (“so they would know where they came from”). The family wasn’t very religious, but they celebrated Jewish holidays and Ben was bar mitzvahed.

Stiller and Meara retired their act by 1970. But Stiller experienced a resurgence of fame later in life when he was cast as Frank Costanza on Seinfeld.

At first, the character was supposed to be meek and quiet, but at the last minute, Stiller decided to improvise, creating the loud and argumentative dad we came to know and love in the iconic 1990s sitcom. While Stiller was featured in less than 30 episodes, his character was truly iconic and he was nominated for an Emmy for the role.

Frank’s catchphrase, the comic but apt supplication, “serenity now!” was inspired by Stiller’s own Jewish father.

Yeah. I adored this man. pic.twitter.com/4YiaTLJh4C

Leah Remini wrote in a moving Instagram post: “I was lucky enough to work with Jerry Stiller, playing his daughter for 9 years on The King Of Queens, but even luckier to know him, the man, the husband, the father, the grandfather. I am only comforted knowing that Anne & Jerry, the great comedy duo of Stiller & Meara are back together. I will be forever grateful for the memories, the fatherly talks off-screen and for the many years of laughter, the kindness he had shown to me and my family…You will be so very missed Jerry.”

I was lucky enough to work with Jerry Stiller, playing his daughter for 9 years on The King Of Queens, but even luckier to know him, the man, the husband, the father, the grandfather. I am only comforted knowing that Anne & Jerry, the great comedy duo of Stiller & Meara are back together. I will be forever grateful for the memories, the fatherly talks off screen and for the many years of laughter, the kindness he had shown to me and my family…You will be so very missed Jerry. Our thoughts and prayers are with you Amy & Ben. #JerryStiller #stillerandmeara

Despite all of Stiller’s successes, the role of his lifetime was, by his own admission, that of a father.

“You’ll always know if I’m in the audience when Ben or our daughter, Amy, is performing,” he told Esquire in 2005. “I’m the one laughing loudest.”

Ben Stiller — himself a Jewish father of two — recalls his childhood as unusual but idyllic in its own way: “We got to stay up late and go to TV studios. It was like this fun fantasyland. But we had no idea how hard they worked.” Stiller and Meara raised their kids in an apartment they owned in the Upper West Side, and their living room often served as a rehearsal space.

“I would hear them sort of working and improvising. Sometimes arguing. We didn’t know if the argument was a sketch or real,” Ben Stiller told Stephen Colbert in 2019.

While Stiller did not want his kids to go into entertainment because he feared the rejection, he became his children’s biggest fans.

“Amy’s very funny,” Stiller told the New York Times. “She’s very much like Anne in a lot of ways, but better. Amy’s a natural. Nobody taught her to perform or gave her a cue. She went out and did it on her own.”

Amy concurred in the same article: “My dad taught both me and Ben to be fearless. He said, ‘Find a stage, find an audience, and do it.’”

The kind of adoration Stiller felt for his kids is palpable in every photograph of him with his children. He seems thrilled — in awe, even — every time he looks at them.

He also gave his younger child, Ben, his first camera, inspiring him to go into directing: “I gave him the camera and he went and ran with it.” He later acted in Zoolander and many more of Ben’s directorial projects.

And yet, Stiller admitted that working with his son could be nerve wracking.

“I asked myself, what’s my greatest enjoyment in this business,” Stiller said in an interview about his son’s 1997 movie, The Heartbreak Kid, in which he co-starred. “It’s what my kids have done on screen.”

If that’s not the definition of a doting dad, we don’t know what is. May his memory be a blessing.

RIP to Jerry Stiller. Here's him and his wife, Anna Meara, cutting an ad for the single-payer healthcare movement in the 90s♥️ pic.twitter.com/B9Lg5FXdf0